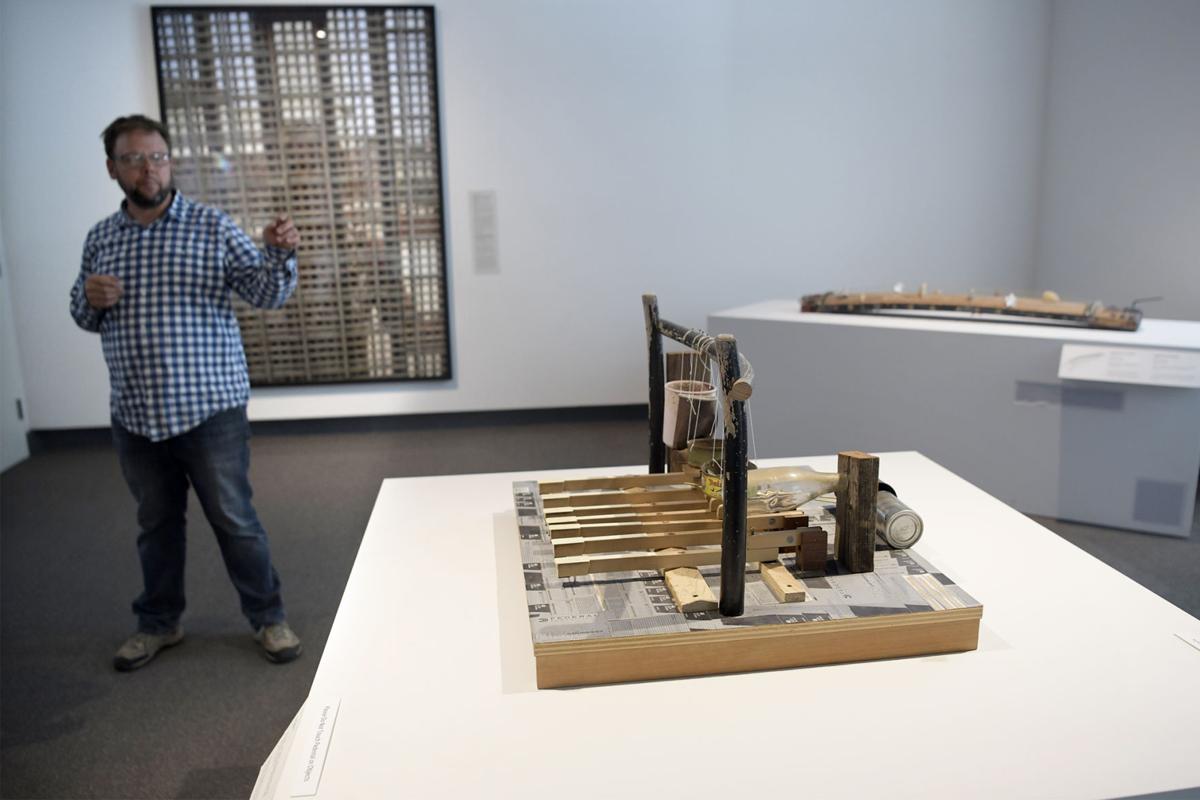 Missoula Art Museum Senior Curator Brandon Reintjes talks about "Border Cantos" on Tuesday. “We’re not immune from border concerns (in Montana)," Reintjes said.  “Artists are often harbingers. They have that ability to grapple with issues at the leading edge of culture.” 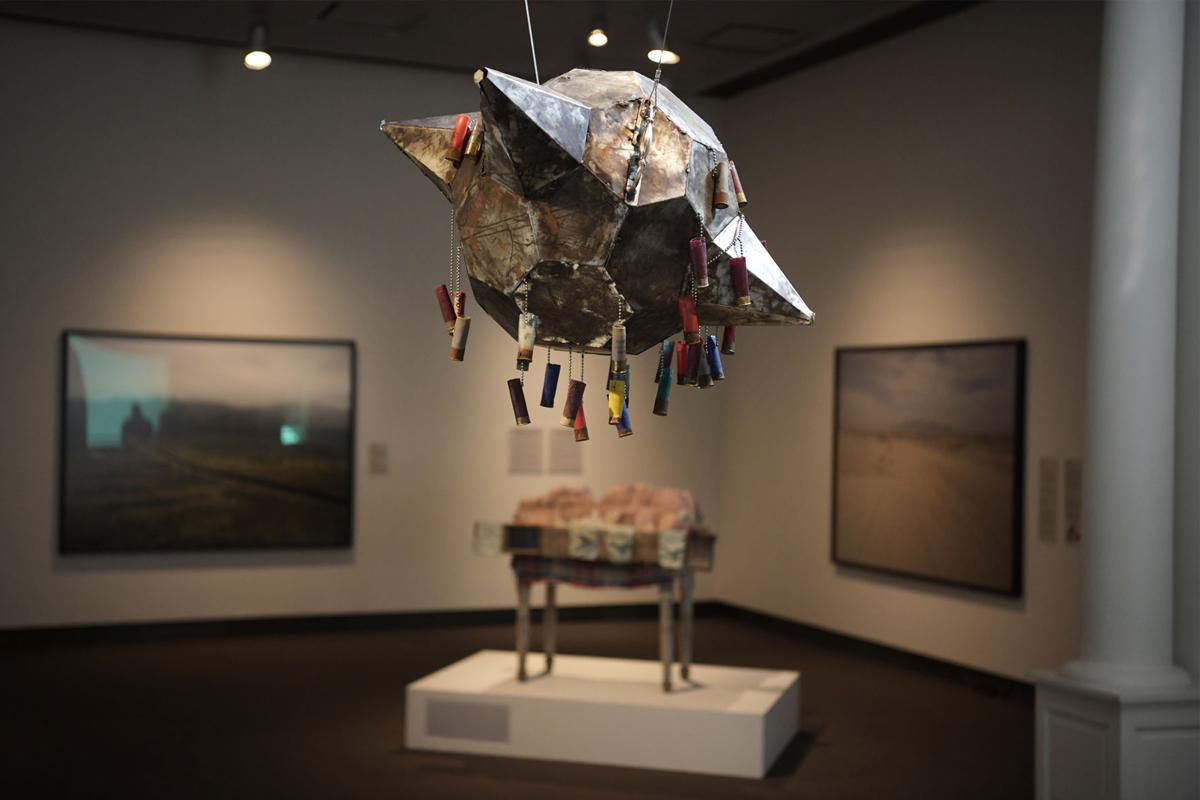 Galindo's instrument sculpture "Piñata de cartuchos" hangs in the Missoula Art Museum. Galindo was inspired by a soccer ball found on the border, and used Border Patrol shotgun shells picked up by Misrach to complete the shaker. 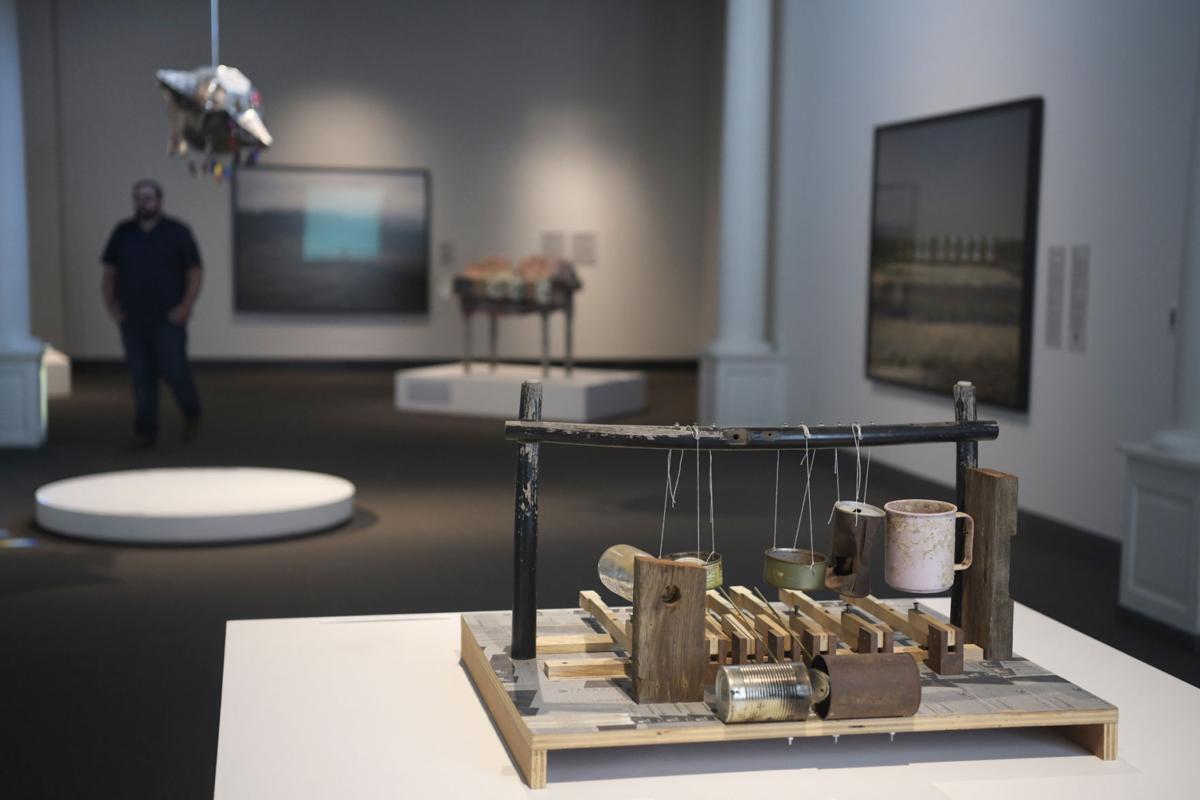 Guillermo Galindo's "Teclata," a keyboard made of empty cans, bottles and a plastic cup found on the Mexican-American border, sits in the Missoula Art Museum. Galindo and photographer Richard Misrach's "Border Cantos" is on display at the MAM until Sep. 21. 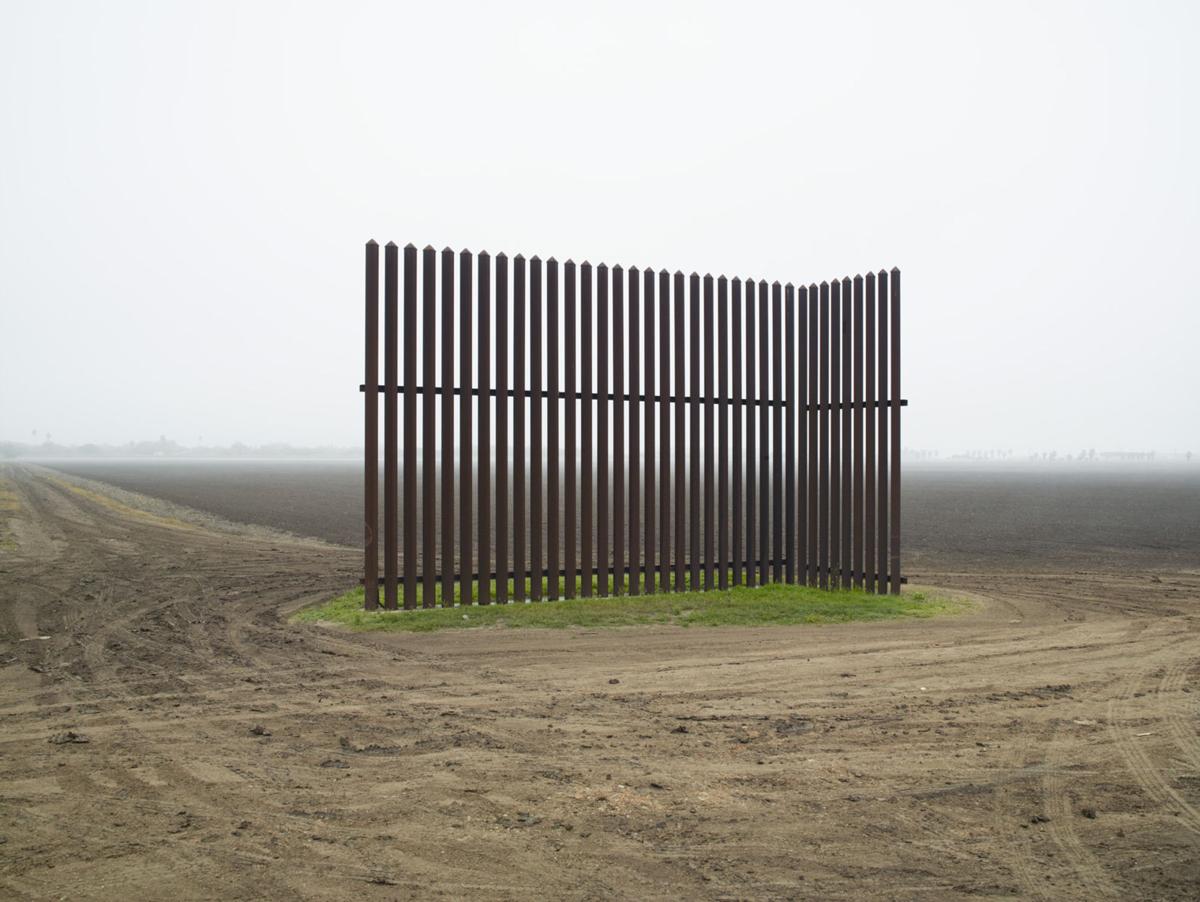 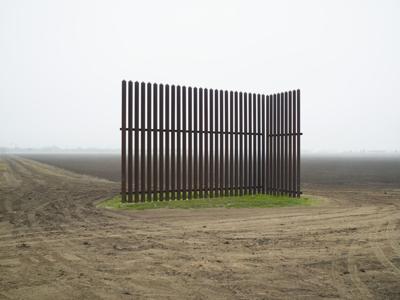 Photographer Richard Misrach spent nearly four years visiting the Mexican-American border with his camera. He would drive for days across the desert, from the Pacific Ocean to the Gulf of Mexico, taking pictures of the wall, the Rio Grande, Border Patrol outposts, water stations and items left by migrants ground into the sand.

“People kind of expect that there’s either no wall, and we need to build a wall, or they expect the whole border to be walled off,” Misrach said.

In reality, there’s only intermittent fencing that randomly stops at certain points, or has wide open gates. There are different worlds all along the border as well, Misrach said, varying climates and natural settings, with beaches, mountains, desert and trees covering the expanse.

“There’s a lot of access," Misrach said. “I just started driving and exploring."

Misrach has photographed the Southwest since the late '70s, and around 2004 started focusing on the border. In 2012, he found his collaborator, Guillermo Galindo, with whom he would produce the expansive “Border Cantos” on display now at the Missoula Art Museum.

In 2012, Misrach attended an art event in San Francisco, where he saw Galindo, an avant-garde composer, perform a piece using instruments he had constructed from migrant artifacts that had been found on the Texas-Mexico border.

“I had also, in California, found these sculptures, which I called ‘effigies,’” Misrach remembered. “When I saw that Guillermo had built these sculptures that were musical instruments … I thought, ‘God, this is really interesting.’”

He spoke with Galindo, a Mexican who lives in Oakland, and the two agreed to collaborate on “Border Cantos,” Misrach providing photographs, Galindo building more instruments out of artifacts Misrach found on the border — tennis shoes, water jugs, juice cans, clothing, shotgun shells and pieces of bone.

“I would bring things back and say, ‘Hey, is this something you can make an instrument out of?’” Misrach said.

Galindo could — the eight instruments featured in the smaller, traveling exhibition of “Border Cantos” include a shaker made of metal and shotgun shells (“Piñata de cartuchos”), a string instrument made of wood tied in a large X, with found clothes draped over it and guitar strings mounted on the chest (“Efigie”) and a vibraphone made of an electrical box lid (“Tortilláfono”).

"The instruments for the Cantos project are meant to enable the invisible victims of immigration to speak through their personal belongings," Galindo wrote in the 274-page "Border Cantos" book. "These instruments tell us imaginary stories about places and people that may or may not still be alive."

The two only visited the border together once, Misrach said, since Galindo has a family and was reticent. Nothing happened, Misrach added, but it was clear that Border Patrol, who would often make small talk with Misrach and offer to show him better spots to take photos, had a different attitude when there was a Mexican man along.

“We were really treated differently than when I would go alone,” Misrach, a 70-year-old white man, said. “He would be profiled … very clearly, just profiling.”

When Misrach went alone, he learned through trial and error how the Border Patrol worked, and where he was and wasn’t allowed.

There’s, obviously, a lot of empty, open space along the border, Misrach said, and he’d learn how long it took for Border Patrol to show up in pickup trucks when he hung out in one spot for a while. One photo, “Border Patrol Target Range,” Misrach took with his iPhone, not sure he was allowed inside the desert gun range carpeted with shotgun shells. He scooped up handfuls for Galindo’s “Piñata.”

Some agents were hostile to him, Misrach said, others were helpful, pointing out better photo opportunities, or offering to stand watch due to rumored cartel activity in the area.

He hasn’t been back since finishing “Border Cantos” in 2016 and wondered how differently his project would go now that the border is even more of a hotbed of activity than it was in the early 2010s.

By the time the 2016 election had finished, “Border Cantos” had already been on display at four major galleries in the United States and the 274-page tome containing hundreds of photos, examples of Galindo’s instruments and essays, was published.

“(Trump) being elected has given it a lot of attention,” Misrach said. “The interest in acquiring the show, showing it, is nonstop.”

The Missoula Art Museum started looking into displaying a few of the pieces from “Border Cantos” back in 2016, according to Senior Curator Brandon Reintjes.

It wasn’t long before the 18-piece touring exhibit was established, and the MAM finally got the opportunity to host “Border Cantos” this summer in its main gallery. Ten of Misrach’s photographs, printed at about 6 feet across, and eight of Galindo’s instrument sculptures fill the gallery. A loop of haunting recordings Galindo made with the instruments plays over hidden speakers.

“It’s a very particular exhibition,” Reintjes said. “All the instruments are tuned into each other.

“Even the pairings, with the photographs, there were suggested pairings.”

The exhibit came with a series of suggested layouts, all designed by Galindo and Misrach, for the most impactful way to view the work. Reintjes said they adhered to the designs as closely as they could, and hired professionals to install the wiring and speakers.

“(Galindo) was pretty specific, even with the locations of the sculptures in the gallery,” Reintjes said. “The way that these unfold in sequence is part of the show.”

Misrach and Galindo will visit Missoula on Sept. 4 and Sept. 6 to give a lecture on “Border Cantos” and perform with some instrument sculptures.

Reintjes hoped the exhibit sparked discussion, and thoughtful analysis, rather than a hard-edged political debate, especially given how topical the border has become since the museum started looking to host “Border Cantos.”

“We’re not immune from border concerns (in Montana),” he said. “Artists are often harbingers. They have that ability to grapple with issues at the leading edge of culture.”

The MAM hosted a migrant stories night earlier in August in conjunction with “Border Cantos,” and will have Misrach and Galindo available at the Sept. 6 First Friday to chat with attendees.

Misrach said he enjoys visiting the museums exhibiting “Border Cantos” and seeing people’s reactions to the work, even over three years after it was completed.

“It’s got so much attention, so many people looking at it, the job is done in a way,” he said.

“We’re talking about a border, that separates two countries, two cultures,” Misrach continued. “Guillermo and I bridged that.

“It’s sort of transcended the basic level of the art.”

"Border Cantos" is on display at the Missoula Art Museum until Sept. 21. Admission to the museum is free and hours are 10 a.m. to 5 p.m. Tuesday-Saturday.

On Wednesday, Sept. 4, artists Richard Misrach and Guillermo Galindo will present a lecture and performance on "Border Cantos" at the MCT Center for the Performing Arts. Cost is $5 for non-members.

On Friday, Sept. 6, the artists will be hosting a First Friday discussion on "Border Cantos" at the Missoula Art Museum.