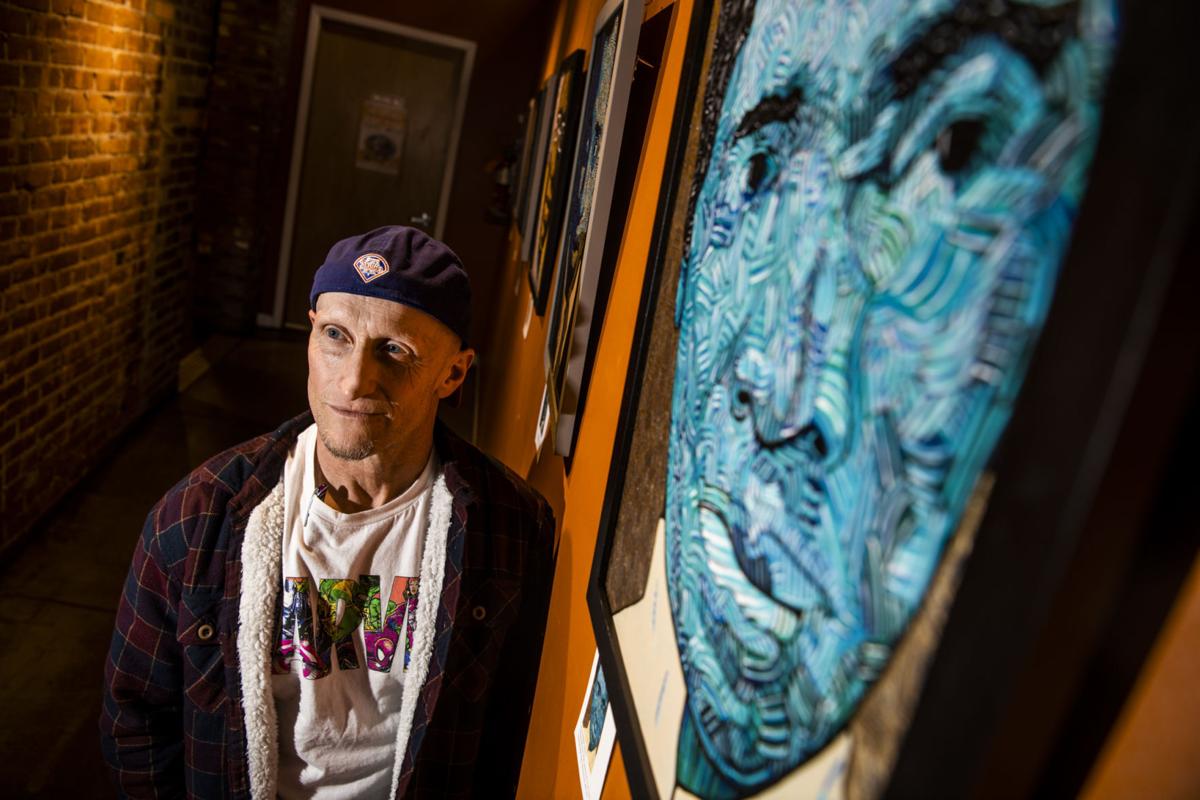 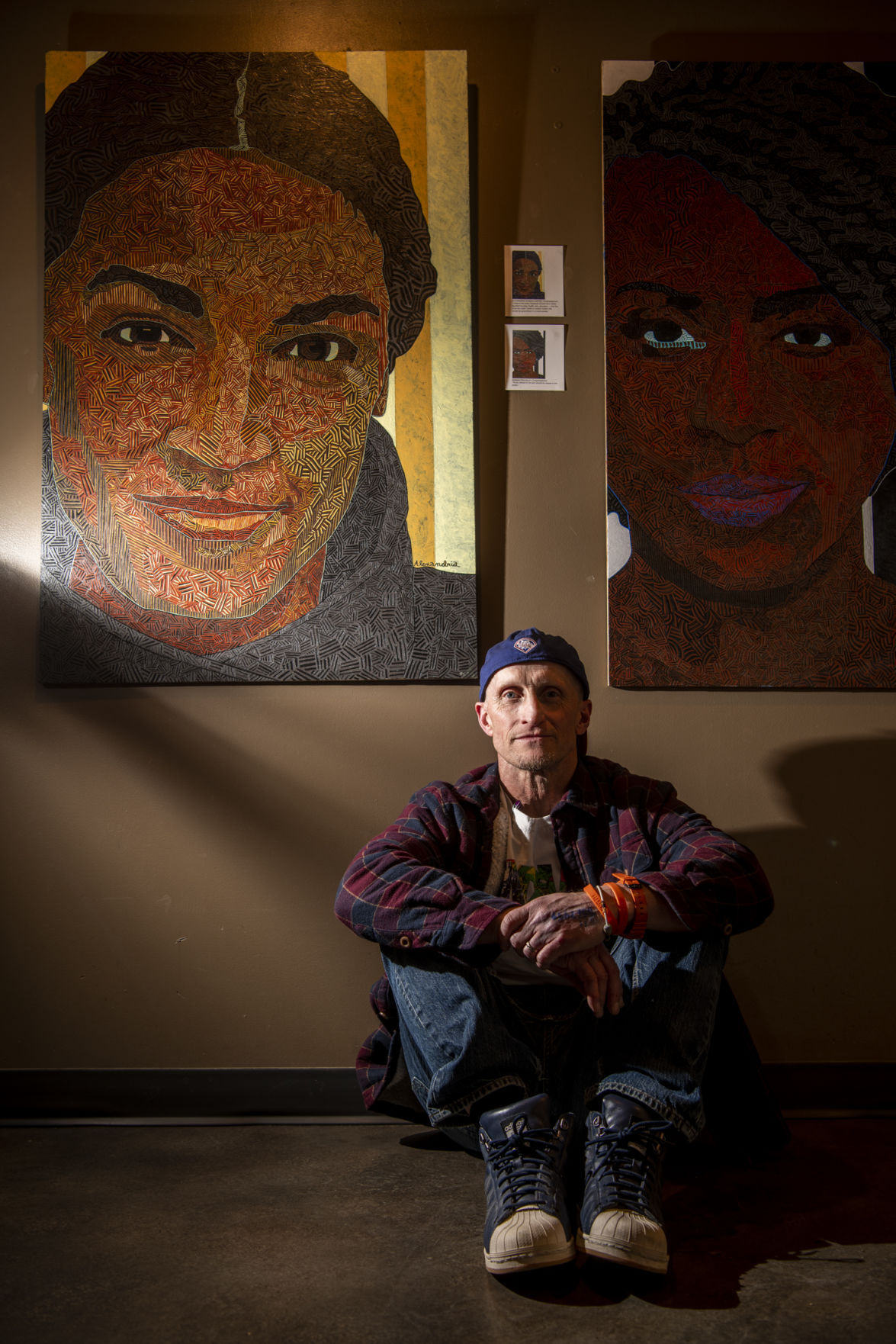 Tim Nielson, a Sentinel High School art teacher, is showing his portraits at Draught Works this month. He thinks of the picture series, featuring social justice figures, as "icons for the post-revolution." 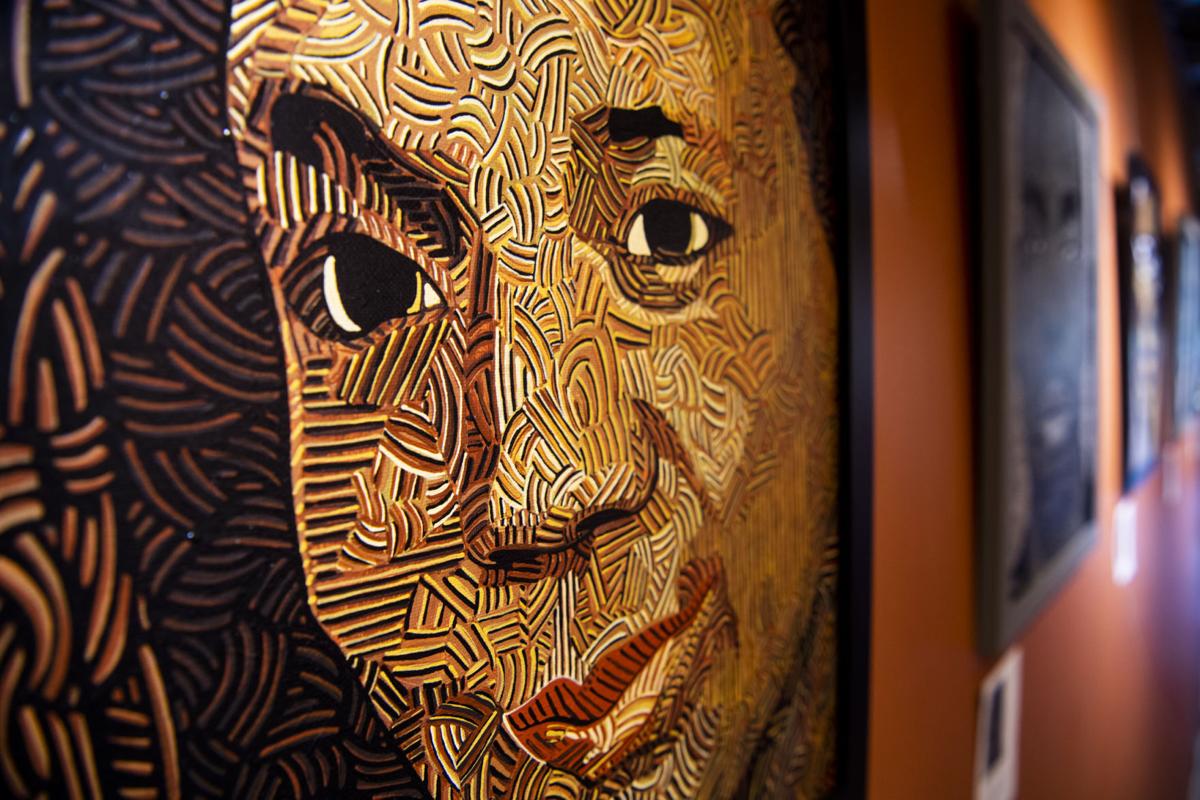 Nielson hopes people who might not know of his subjects, such as activist Bree Newsome Bass, might learn more and get inspired.

Tim Nielson, a Sentinel High School art teacher, is showing his portraits at Draught Works this month. He thinks of the picture series, featuring social justice figures, as "icons for the post-revolution."

Nielson hopes people who might not know of his subjects, such as activist Bree Newsome Bass, might learn more and get inspired.

When Tim Nielson talks about his paintings, the subject naturally moves back toward politics at various points.

His particular style, almost like mosaics, makes them easy to pick out from across a room, whether it’s in Draught Works this month, or on permanent display in Imagine Nation, where they’re a natural fit among the socially conscious decor and exterior murals, or in the lobby of the Missoula Mercantile hotel.

He describes the series in a couple of different ways — the shorter one is “political fan art.” The other description, that sounds more like the art history major in him, is “icons for the post-revolution.”

“In a just society,” he said, “who would you put up on the wall?” or want to be commemorated in a statute, or in the title of a public building?

“Who are the founders of the country I want to live in? Yeah, that's easy. It's Sojourner Truth, it's Harriet Tubman. It's John Brown. It's Frederick Douglass.”

“If the conversation is going to be moved, someone has to be willing to say things that are hard,” he said. “It’s uncomfortable to acknowledge these things."

Nielson, a Havre native, has been teaching art at Sentinel High School for 19 years, and seven at Big Sky before that. He went to college with plans of playing baseball and football, majoring in political science at Carleton College in Minnesota. That included a class with the late Paul Wellstone, a future U.S. senator and “fantastic political activist,” he said.

“I was a political science major until I had taken all of his classes, and then I had to take somebody else’s classes,” he said.

Nielson switched to art history. He admired sincerity in art, and happened to be in college when Marxism was coming up in class discussions about the art world and the money involved. It suited him, because “I could be dismissive and cynical and enjoy the art,” he said. On the one hand, he could admire van Gogh or abstract expressionists, but not have to fall into the cult of genius either.

After college, he played football for several years in Austria, and had returned to Montana trying to figure out how to make it work. He was living in Bozeman and working at Bridger Bowl when he decided to get a certification to be an art teacher — both of his parents taught — and had to learn practical art skills on the way.

The portraits began back in 1997, after the death of his father — he felt like he’d been waiting to do things that he’d wanted to do. He started to get up very early to paint. As for the people he picks, he wanted ways to make pictures that are accessible in some way.

“To paint a picture is, really, it’s just unnecessary. No one needs it. But apparently I need it,” he said. So choosing figures he feels are important or relevant transforms it into “an activity that connects to something bigger than myself.” If a viewer doesn’t know who a particular person is, they might learn something new.

His particular style, with short sets of angular marks, belies his desire to be something other than a painter. “I’d love to be a quilter or a stained glass artist, because I think it would serve whatever I do better than painting.”

It’s a straightforward way of making a picture, he said. He sets out to make the surface interesting, and once committed to that language of marks, has it see it through, a time-consuming and meditative process compared to landscaping. “I create difficulties to resolve,” he said.

Writing about art history felt grueling, with the rewards far removed. Painting, meanwhile, he could “do all day every day and be just fine.”

The particular subjects make him feel as though “the time spent is worthwhile,” too. The stories behind the people are interesting and inspiring.

“Within the United States Congress, you have people that you could admire. Well, that’s just a shock,” he said.

Tim Nielson’s portraits are on view this month at DraughtWorks Brewery.

Montana Book Festival: Highlights from a weekend of readings

'Entanglements': An artist-archaeologist's encounters with nature