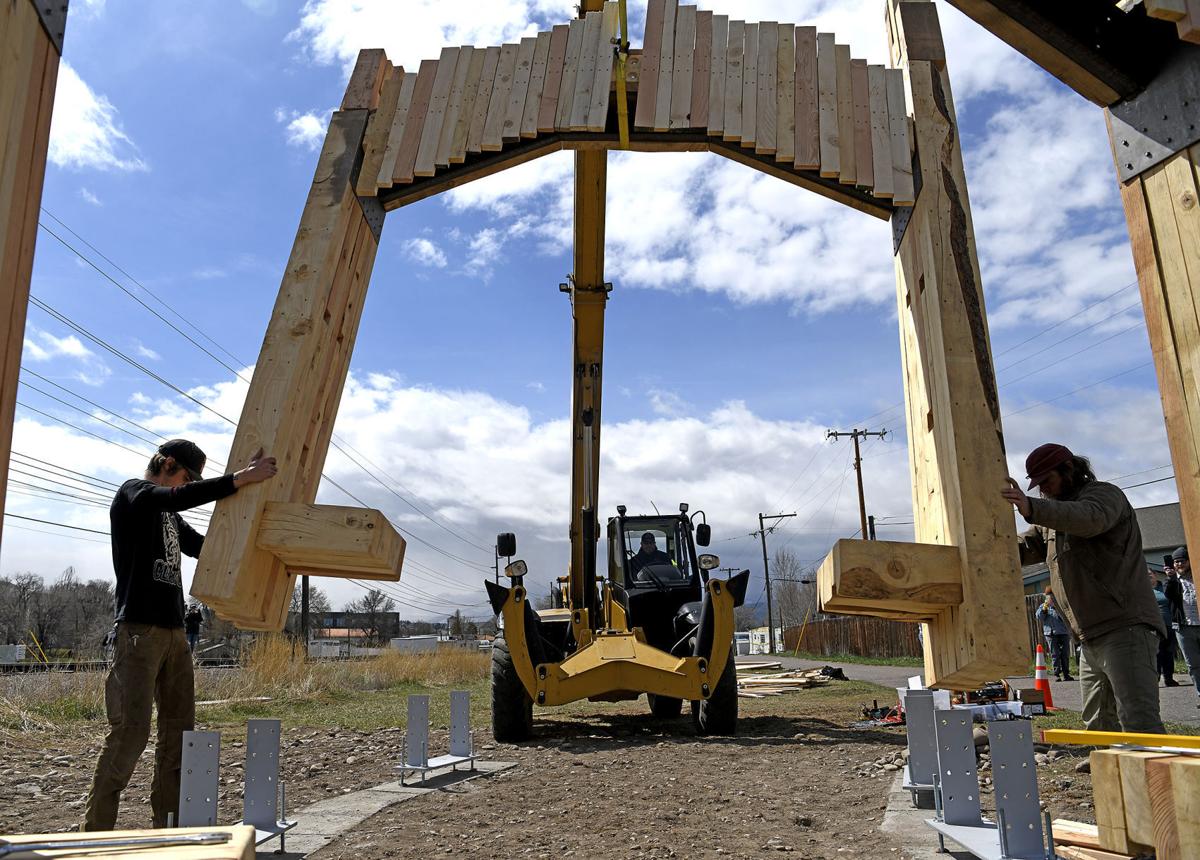 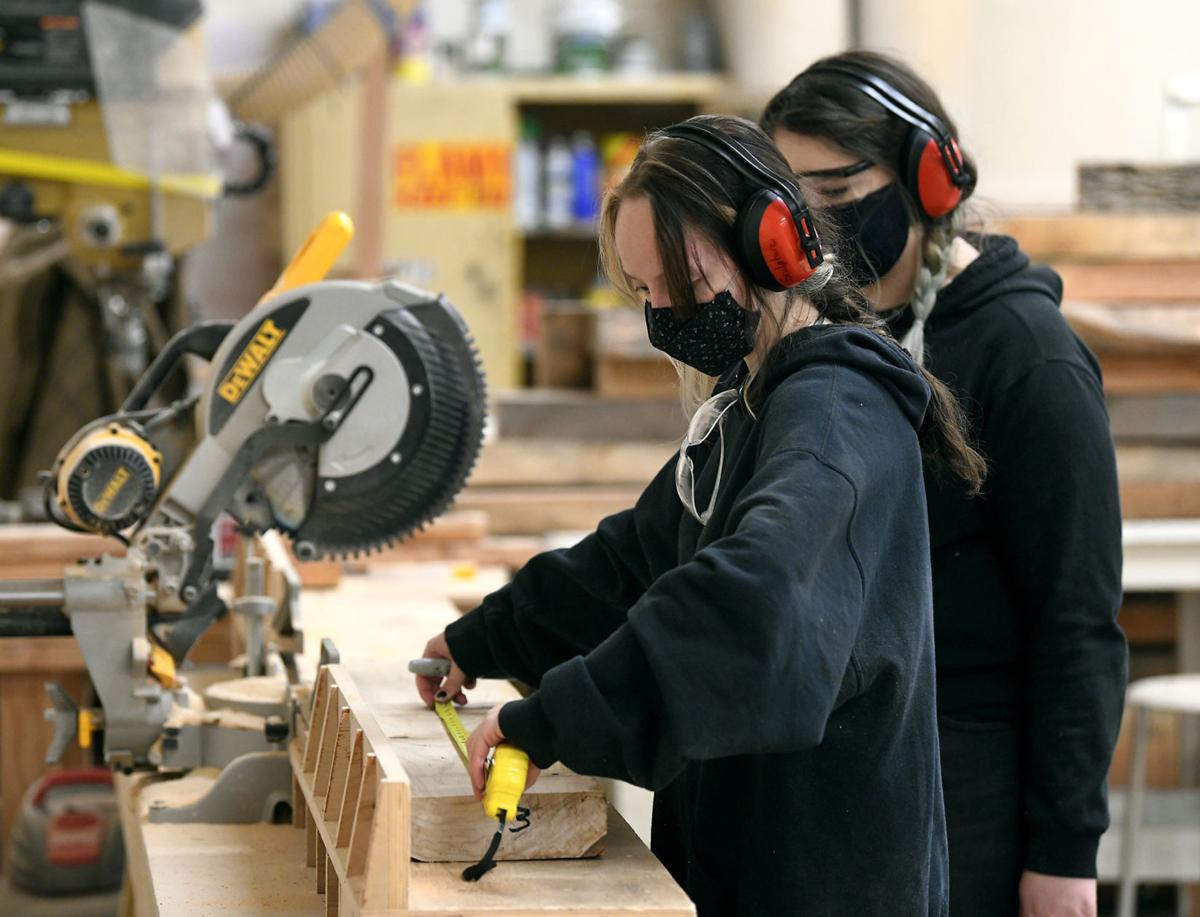 George Finn, left, and Mari Rizzuto measure and cut timbers for the sculpture. 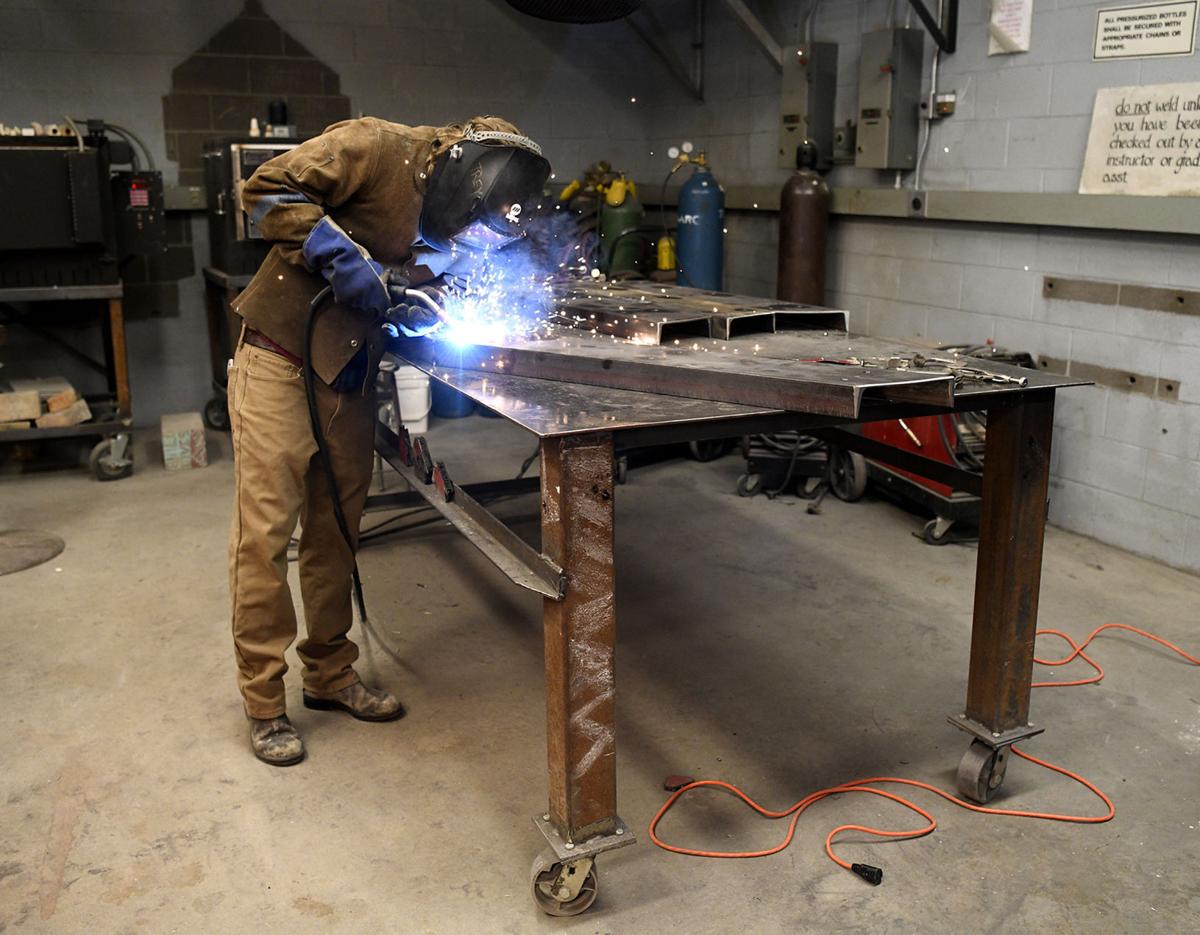 Trey Hill welds one of the steel archways for the piece in the sculpture studio. 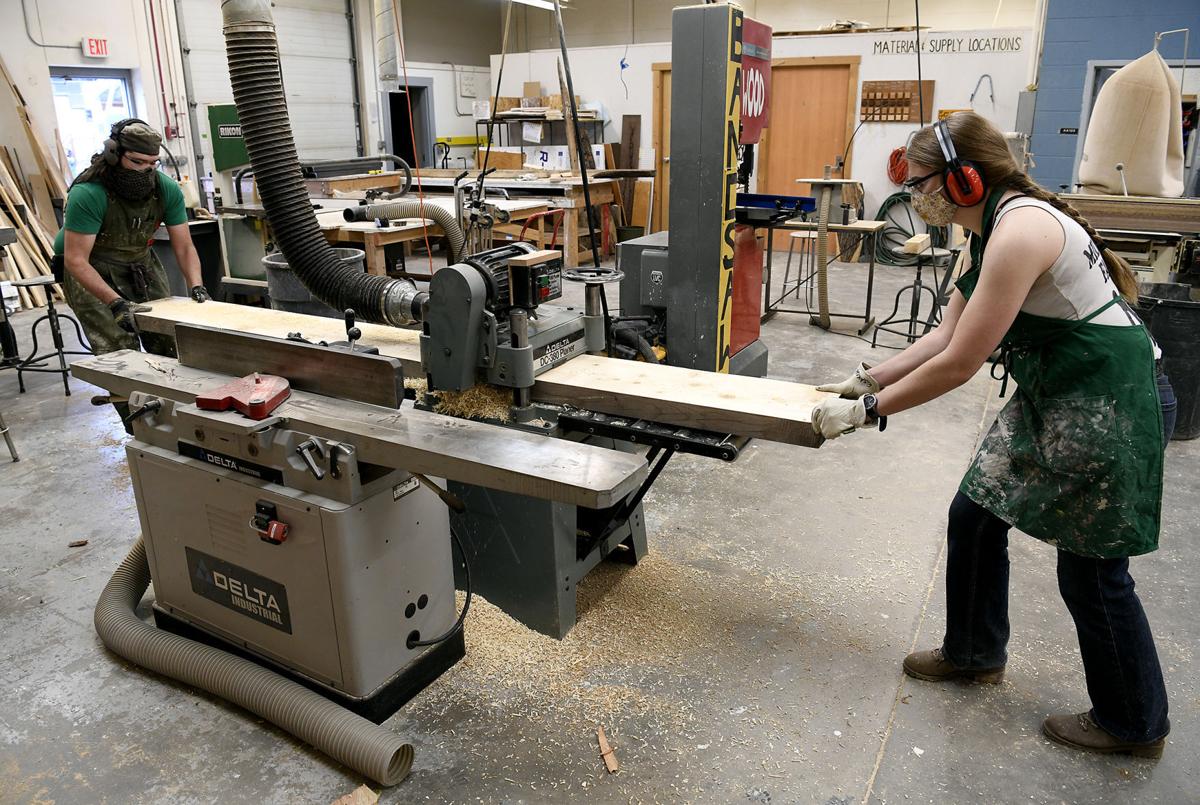 Jim Moon and Sonia Olson plane timbers to be used for the sculpture. 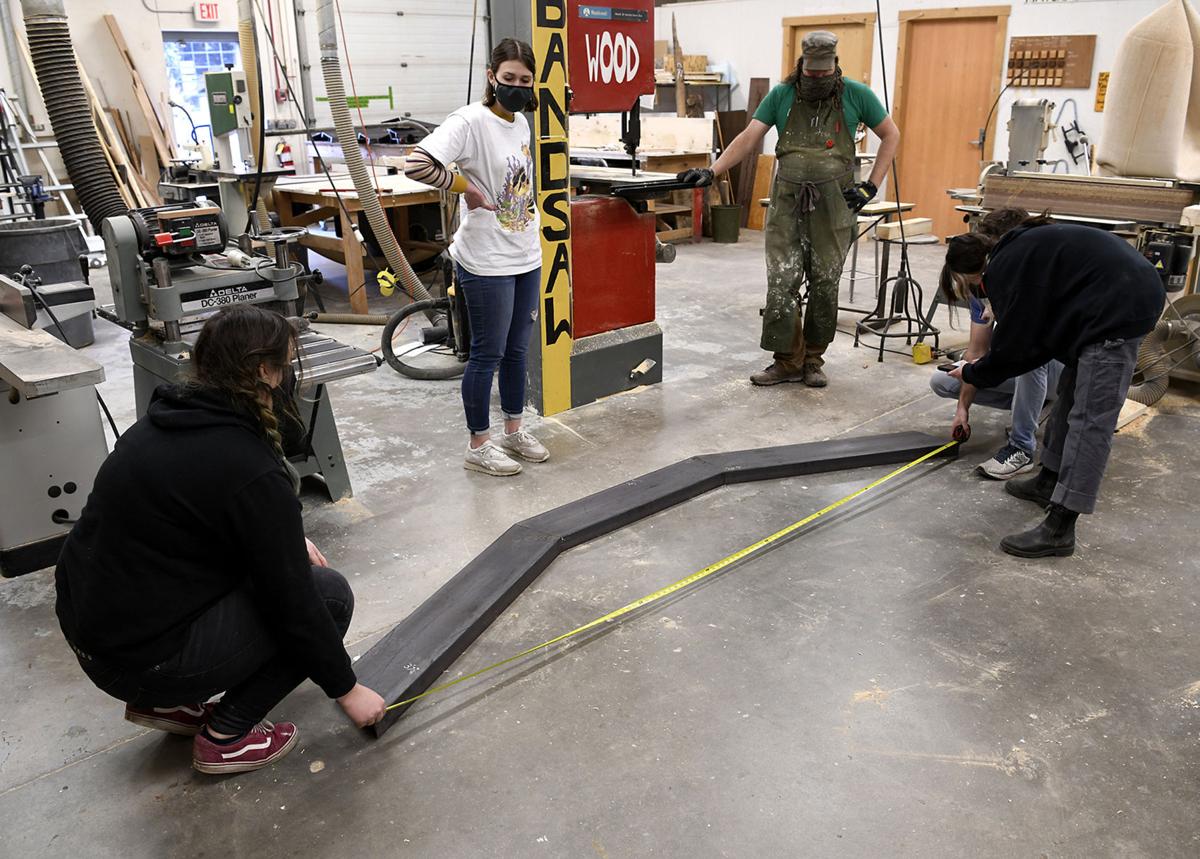 Students in the class measure pieces of metal that will form an archway of the sculpture. 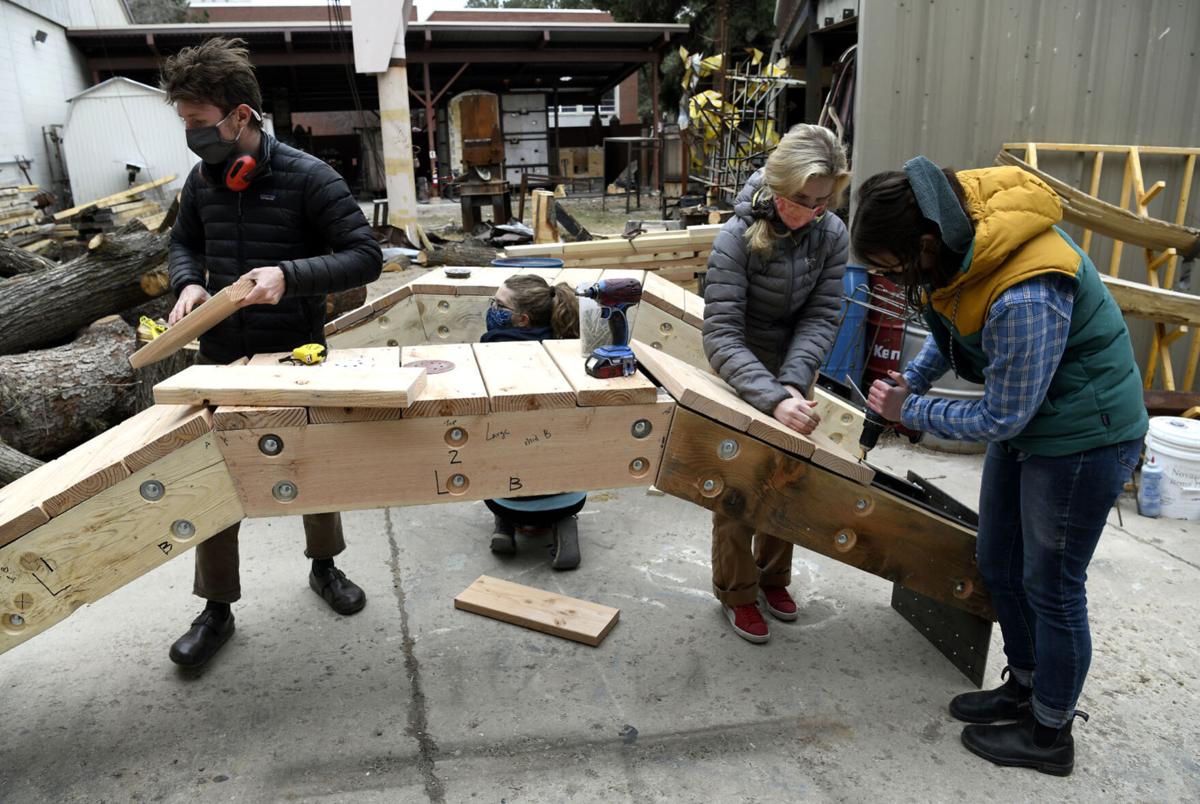 Kain Brauneis, Sis Gibson and Brooklyn Little, from left, assemble pieces of the sculpture at the UM Art Annex. 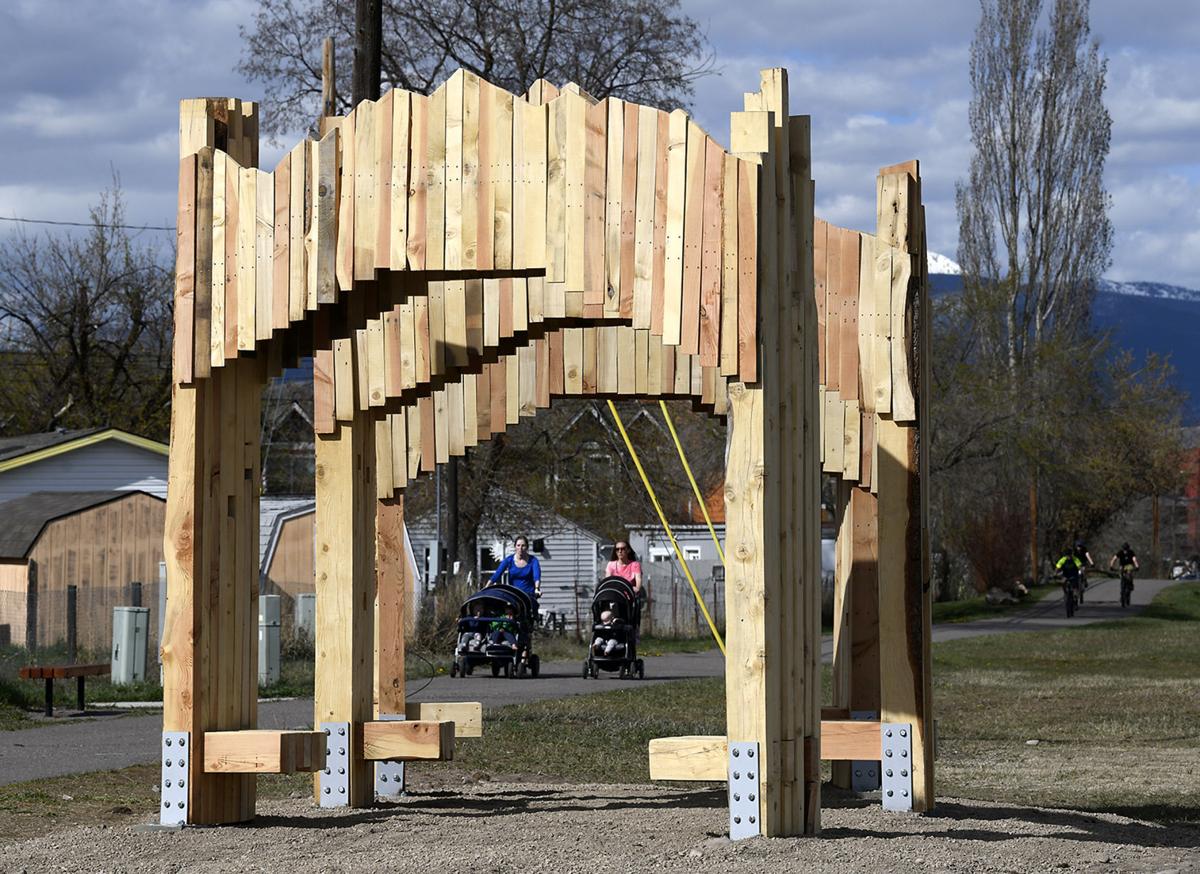 Trey Hill's class designed, built and installed their sculpture in one semester, learning not only artistic aesthetics but also how to navigate the engineering, permitting and other issues that need to be addressed with public art. 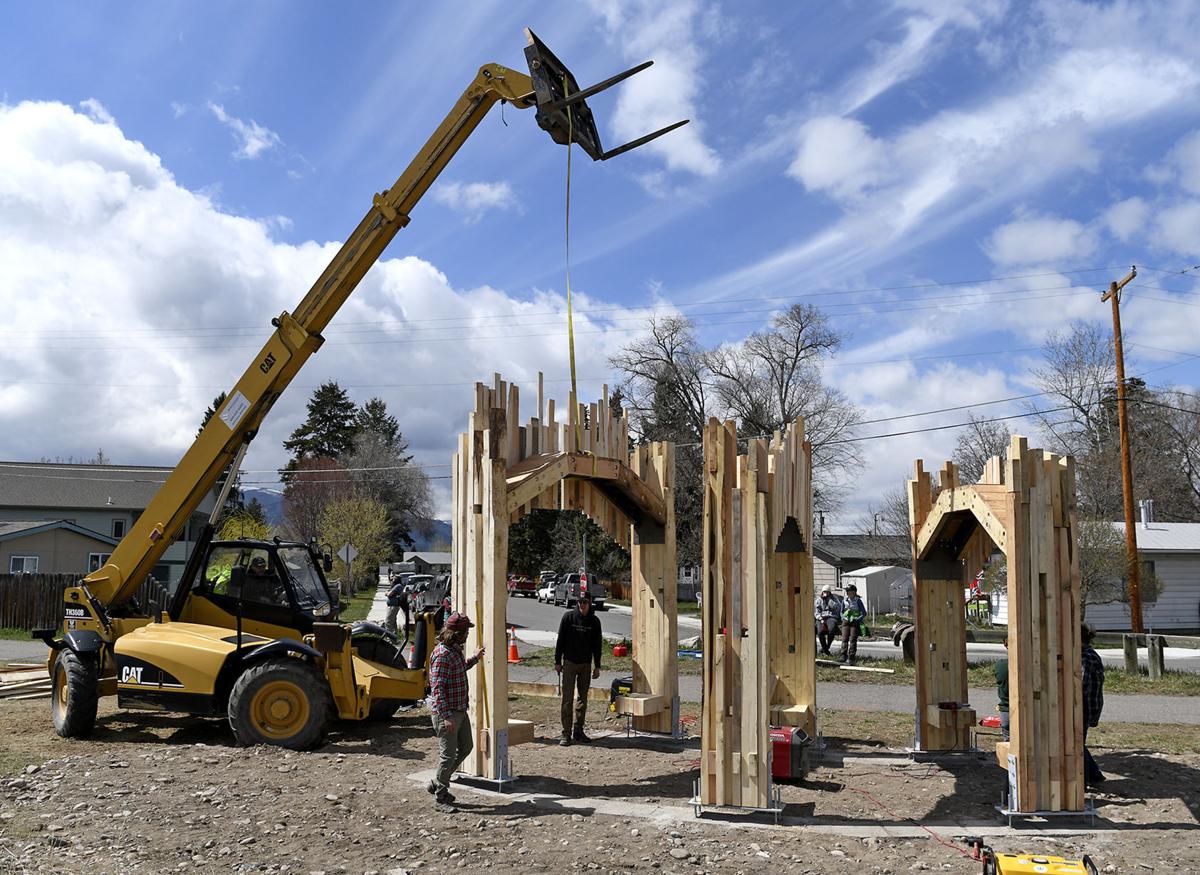 The third archway of the sculpture is set in place on the Bitterroot Branch Trail near Southgate Mall. The arches and the footings had to be designed and measured to fit together for the installation. 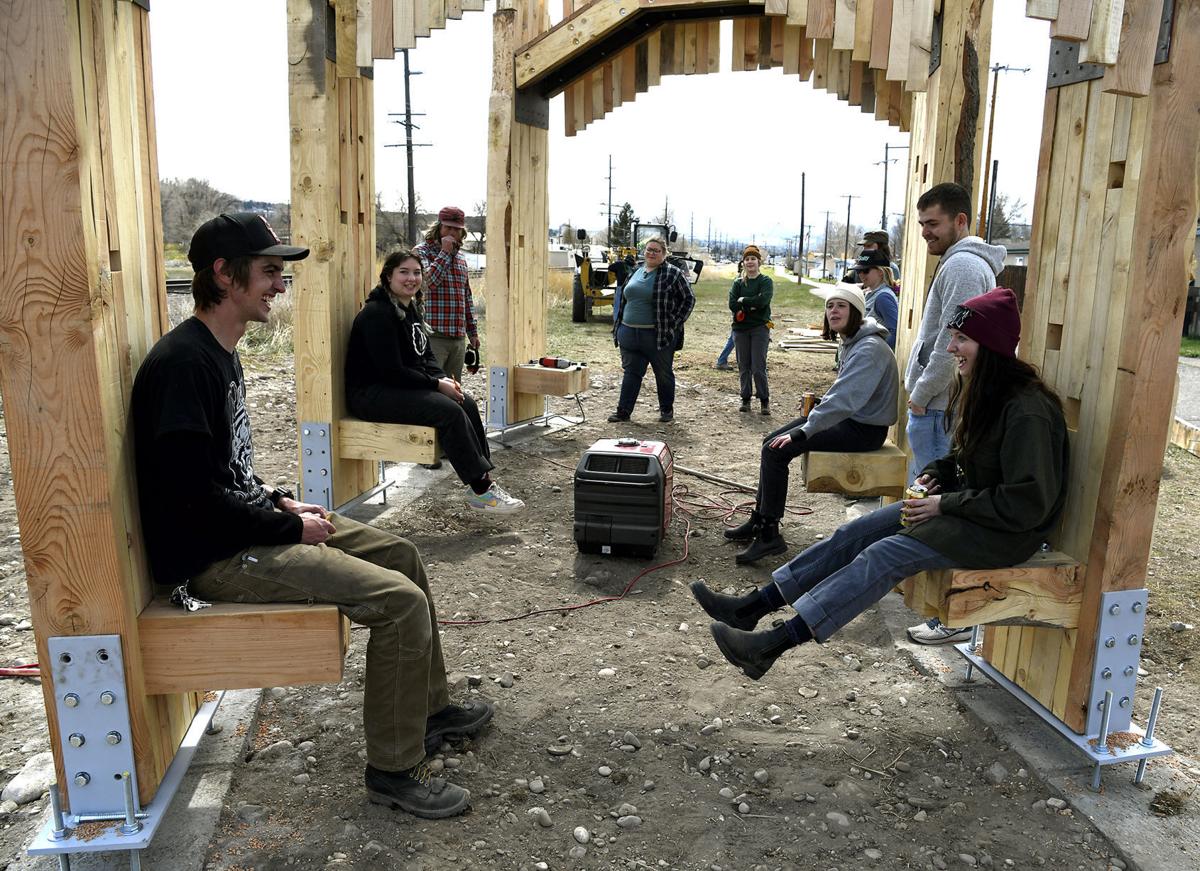 The class relaxes for a moment after their sculpture is safely in place. 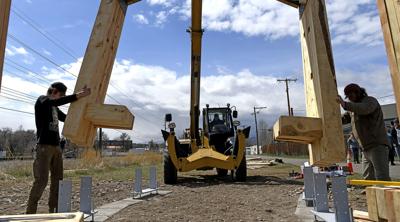 One sunny but cold morning in late April, the sounds of one particular art class were indistinguishable from a construction site.

Impact wrenches were drilling. Massive bands of reclaimed wood were joined together. Generators were humming.

When the timing was right, a professional operating a telehandler lift raised the wood and steel arches — three in all, measuring between 10.5 and 13 feet tall — off the ground and upright, and they guided the legs into place on metal brackets with no wiggle room set in concrete.

“In hindsight, I would say it was a very ambitious project to get finished in 15 weeks,” said Trey Hill, an associate art professor at the University of Montana School of Visual and Media Arts.

In the span of a semester, they went from concept designs and approval to fabrication and installation. In between, there was “an incredible amount of labor,” Hill said, including hours upon hours of measuring and planing wood and total buy-in from the class to get it done.

Now, the project was built: a shade structure along the Bitterroot Branch Trail, at the junction with Harve and Eaton streets and across the tracks from Bob Ward’s and Sons.

On installation day, the arches’ main parts were loaded into trucks and transported to the site before drilling them together. As they worked, passers-by stopped to ask what they were building — one nearby resident said his family had been placing bets.

The explanation — a shade structure designed by sculpture students — got positive responses. Another resident, Nikki Denman, asked and upon learning what the as-yet-incomplete project was, said she loved it — that it would brighten up the area and remind people why Missoula is Missoula.

That stretch of the trail, from Rail Link Park at South Avenue down to McDonald Avenue, is largely grass next to the tracks with only an occasional bench.

The sculpture, as yet untitled, is the fourth in a series of shade structures for Missoula trails built in collaborations between groups, which have varied over time. This particular one included the students, the nonprofit Trees for Missoula, an architect from MMW Architects and a structural engineer from Morrison-Maierle.

Karen Sippy, executive director of Trees for Missoula, and Hill began talking about a potential project, which eventually became a semester-long course: Sculpture II: Public Sculpture, the first of its kind at UM.

Students, most of them undergraduate art majors who’ve taken prior sculpture classes from Hill, signed up.

The students started by splitting into four design groups, and had to work together on a final, achievable project based on materials and the location — outside, exposed to wind and weather.

The ridgeline-like arch references the landscape, a natural flowing element, since they didn’t want to place something with too much of an angular shape that wouldn’t agree with the setting, said Brooklyn Little, an art major.

Each arch leg has a single-seat bench where you can sit down and peer through at different angles — they wanted an interactive element to it, said Sis Gibson, an art major. You could have a meeting, take a break with your dog on a walk.

They didn't want full benches, so someone on a bicycle or in a wheelchair can move under and through the arches easily. It has an open feeling, and isn’t closed off like some designs are, and feels less intrusive than it would be with a tunnel-like roof.

They ran their designs by professionals — Chris Haskill, an architect at MMW, and Maria Chesnut, a structural engineer at Morrison-Maierle. Chesnut has worked on several of the prior structures. Her day-to-day work is “to make architects’ visualizations and programs come to light, and so that’s really what I’m doing here is just allowing the students’ creativity to come to life.”

They reviewed them all and then went through some adjustments (it became smaller, for instance) and then went over details on how to assemble it. There were Crime Prevention Through Environmental Design standards to think about.

They took it through the Parks and Rec board approval process. While it has the city’s blessing, it didn’t require any public money. It’s constructed with cottonwood, fir and spruce harvested from the urban forest in Missoula, specifically Bellevue and Kiwanis parks.

George Finn, an art major, signed up specifically because of the many facets involved: sides of art that include administrative, dealing with business and the public.

The collaborative aspect is different as well. Normally, “we’re really only consulting ourselves or Trey to see if it’ll work, and here you have like 15 different opinions,” Gibson said.

“And the architect and the engineer,” Little said.

Wood saws and impact wrenches are now in the artistic toolkit, which were not before for many of them. (Hill handled the welding torch.)

“It’s been great getting hands-on experience,” Gibson said. “I think we’re doing a lot of new things, and we’ve been trying to go outside our comfort zone.”

“I feel like as a woman working on this piece, usually construction or working with wood or metal or whatever it might be is more male-dominated, and I feel just as educated on everything and confident,” she said.

Hill said that before the class, one student told him that they’d barely used a hammer. Now they know all manner of problem-solving, planning, fabrication and installation skills.

The final touches were the “cladding,” as they’ve been calling it — the row of boards that covers up the supportive metal arch. The cladding boards were sawed and nailed in place on site, and then touched up after the arches were raised — there’s a curving ridgeline on the top, and on the bottom a more blocky version.

If you look south, the cladding frames the Bitterroot Mountains. Look to the north, and it does likewise for TV Mountain and Stuart Peak. The students took a quick break to give the seats a try and were pleased with the height off the ground.

Gibson hopes the success of this project will inspire similar ones in Missoula, she said. Hill and Sippy, meanwhile, are already talking about a second edition of the public sculpture class.

“It’s so unusual for a group of college [students] to have such a lasting impact in terms of this piece,” Gibson said. “Usually wood sculpture or ceramics, like you make the piece, and then you have them critiqued, and then they’re in your studio, and they’re in your house, but no one’s really seeing them again.”

This piece, meanwhile, is “envisioned to last at least like 50 to 75 years, if not longer.”

The ribbon cutting for the sculpture is on Sunday, May 2, at 2 p.m. It's located at the corner of Harve and Eaton streets on the Bitterroot Branch Trail.