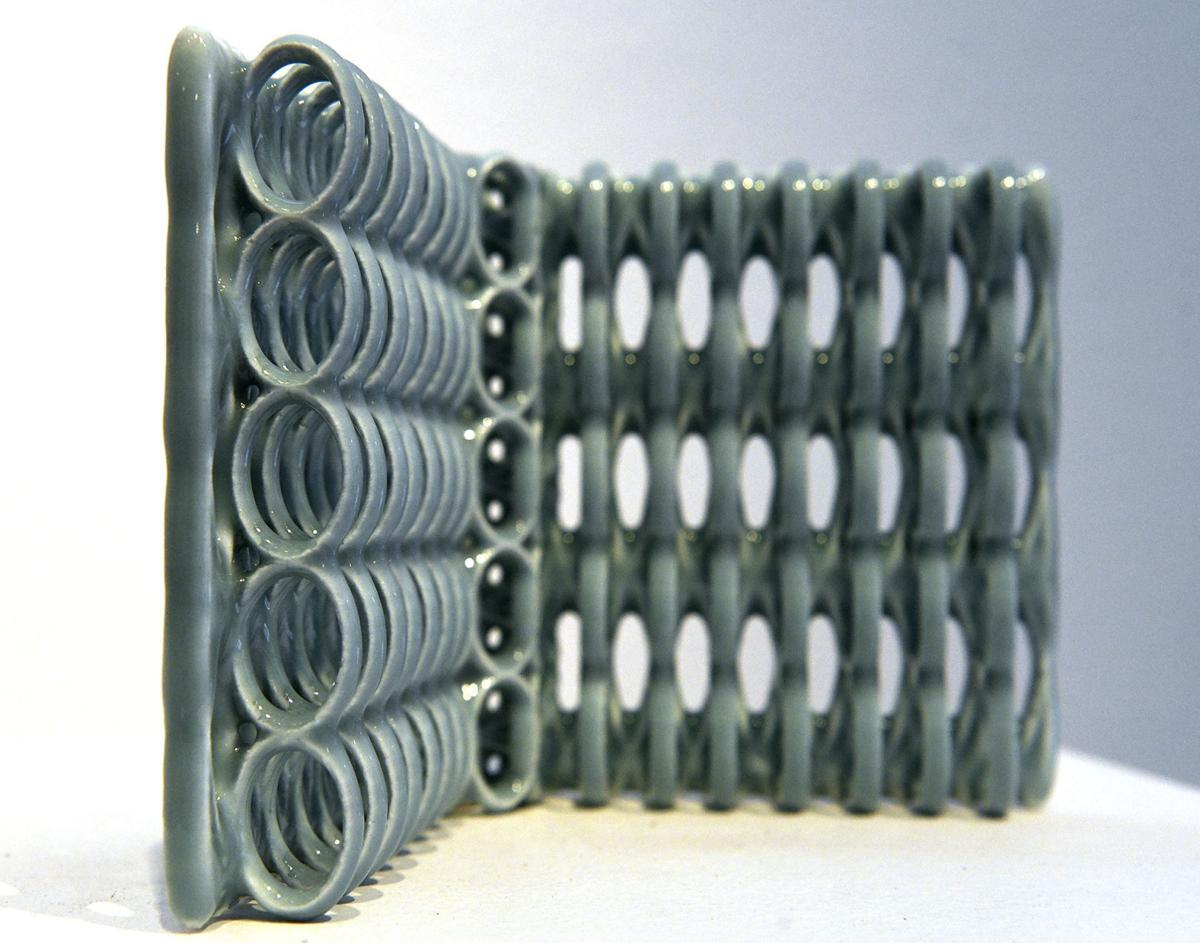 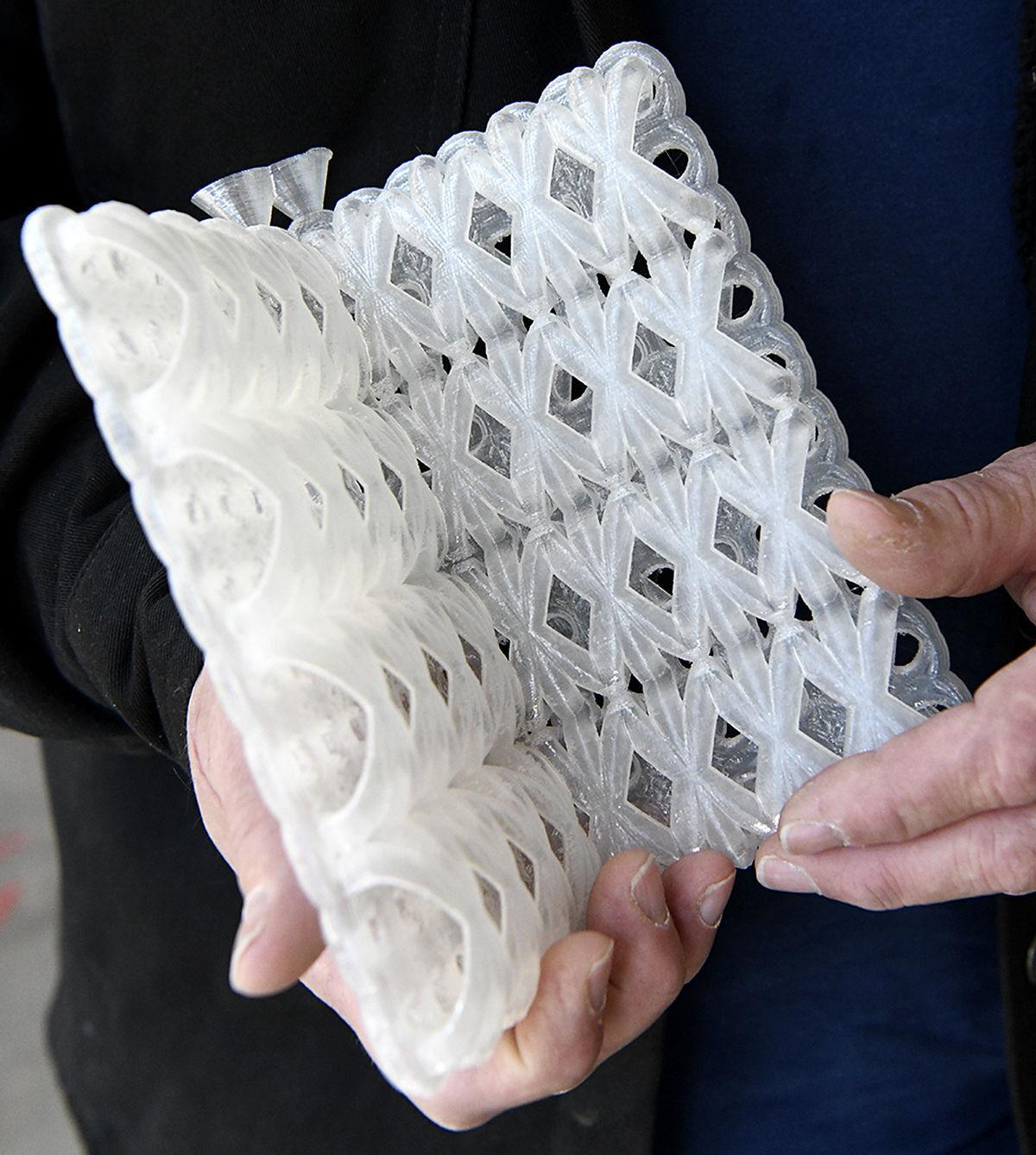 Pfarr uses a 3D printer to make a mold out of biodegradable plastic, into which he pours a proprietary liquid clay that is then fired in a kiln, burning the mold away. 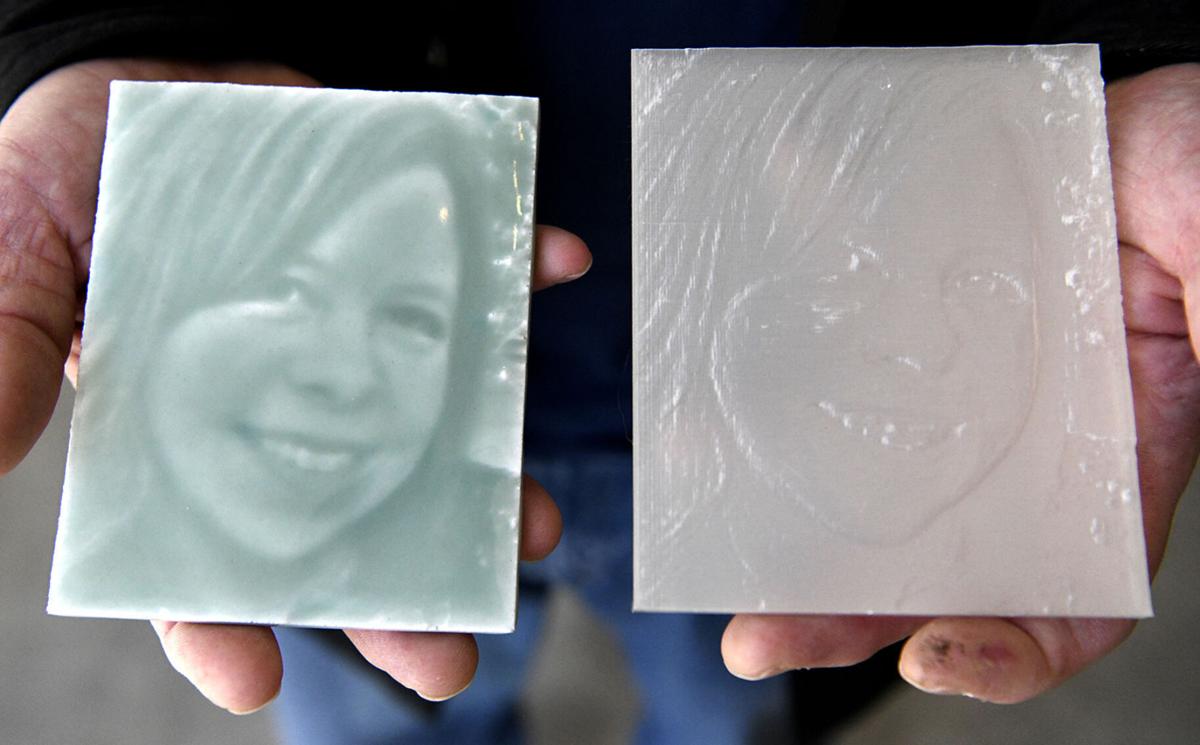 Pfarr is using his process to create relief tiles from photographic images. 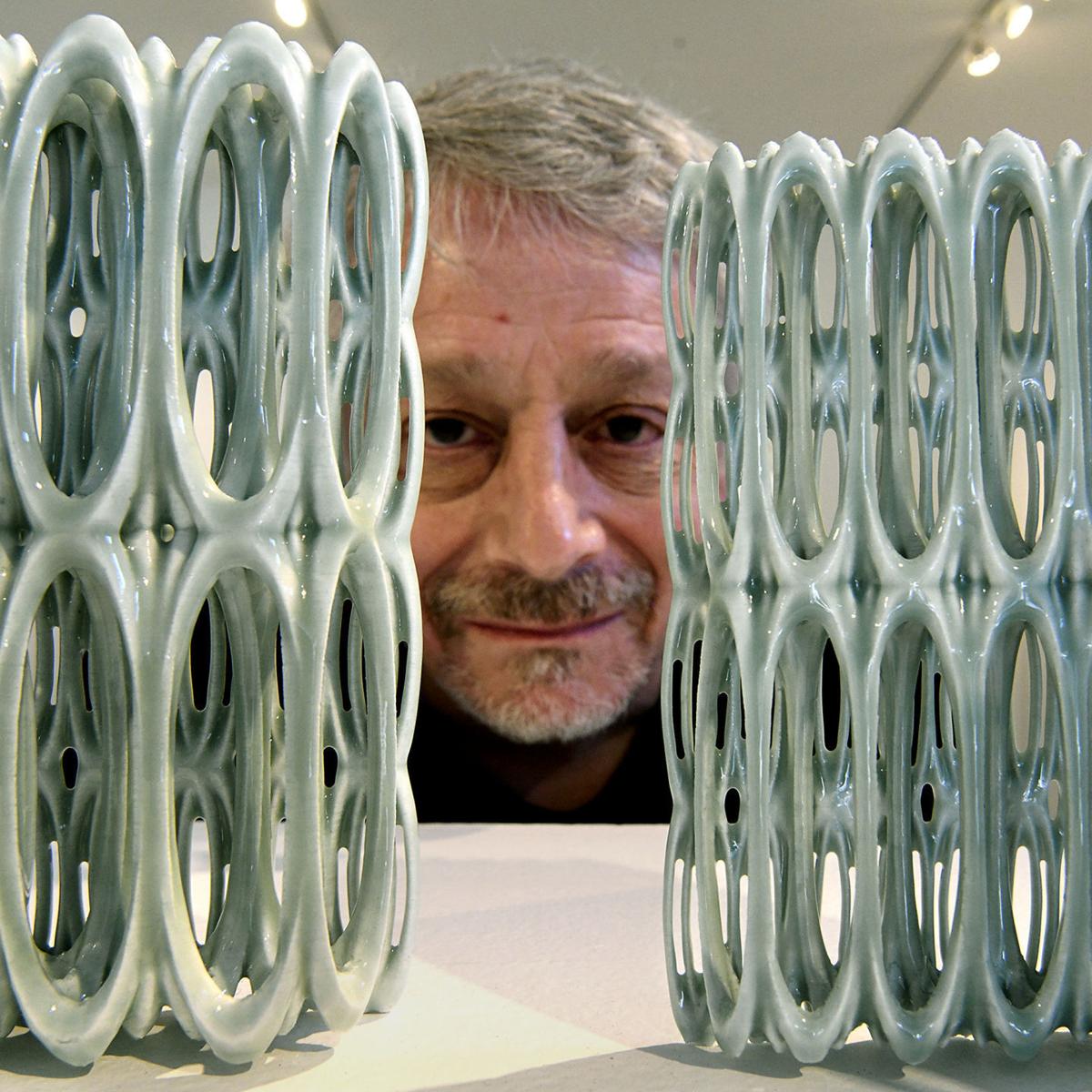 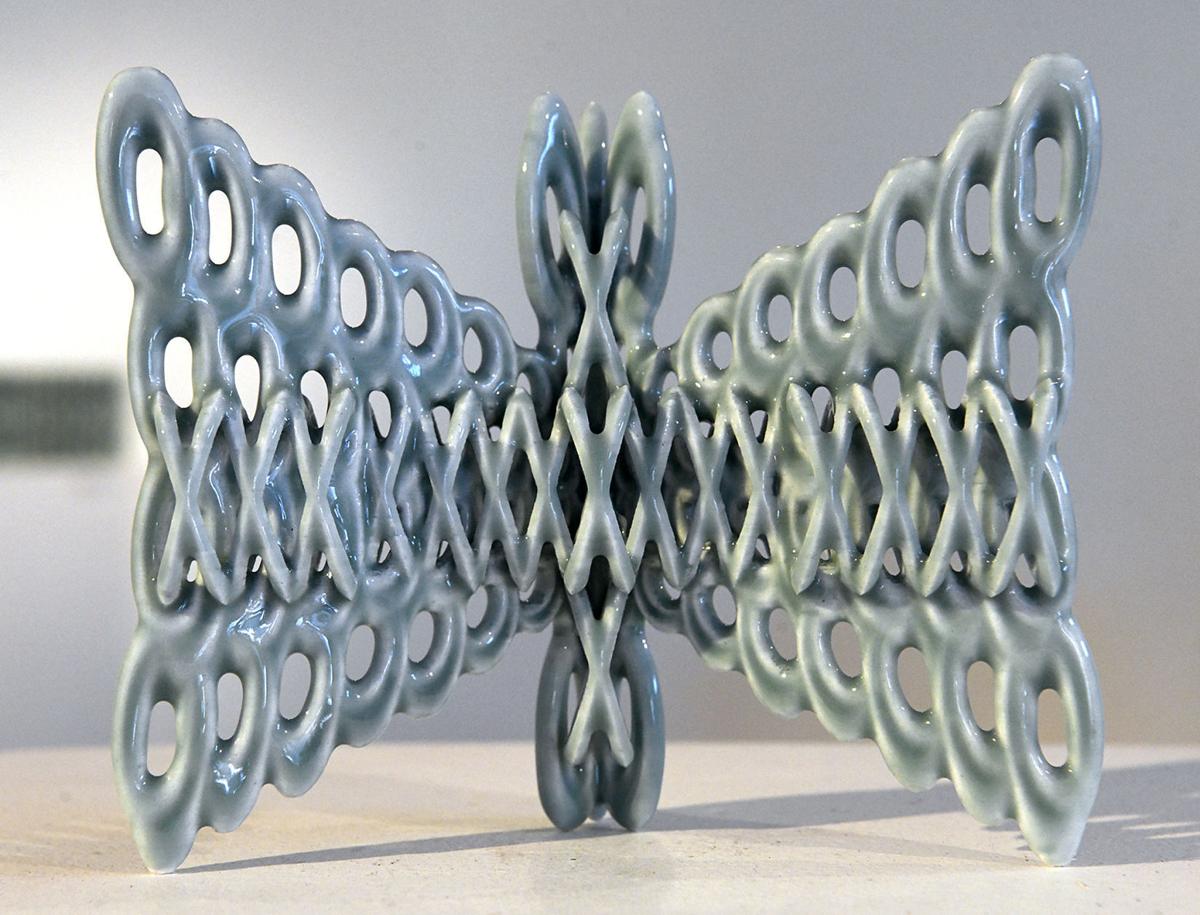 Pfarr uses a 3D printer to make a mold out of biodegradable plastic, into which he pours a proprietary liquid clay that is then fired in a kiln, burning the mold away.

Pfarr is using his process to create relief tiles from photographic images.

It’s unlikely that you’ve seen any ceramic sculptures like Albert Pfarr's before. He wouldn’t say they don’t exist anywhere else, but as for the way they were made, “it’s a completely new process,” he said.

The works in his exhibition, “Vessels of Communication,” resemble open books, made of rows upon rows of loops, all in glazed porcelain, that couldn’t be made by hand or with traditional mold-casting techniques. An MIT engineer recruited him to help devise a way to adapt ceramic casting to 3D printing.

“He really became my mentor, he really opened up my mind in a way that I had never had it opened up before,” Pfarr said.

When Pfarr was living in New York, he worked at Greenwich House Pottery and taught classes, including one in experimental ceramics. Through a student, he met an engineer from the Massachusetts Institute of Technology named Stuart Uram who had a novel idea. People were using 3D printers to make objects — why not use the printer to make a mold, which could then be used to pour a ceramic material and cast an object?

Pfarr’s first thought was that it was impossible, but worth pursuing. Within several months, they had a prototype for a process that Pfarr still uses.

He can design molds for sculptures and print them on a regular 3D printer with standard biodegradable plastic. He then pours a proprietary liquid clay into the mold and after a few hours it will harden. Once in the kiln, the mold will burn away.

A sample mold has a spout so small that you couldn’t pour normal liquid slip through it, but their process makes the clay fluid enough that they can.

“It’s a common material. But we're using it in a very uncommon way,” he said.

They reached out to a firm called Shapeways that 3D prints individual orders, which bought the rights to their material. Pfarr worked for them for a number of years on the process, but it was eventually deemed too expensive and was phased out, he said.

Uram died in 2019, and Pfarr has continued the process, which as far as he knows, hasn’t been replicated by anyone else.

The pieces in “Vessels of Communication,” all made in the last six months or so, reference books and information. The physical book shape is a nod to his wife, Julie Stevenson, a literary agent.

The basic building block he’s chosen are rows of loops that, while delicate-looking, are structurally sound. A sample title is “Book L-202,” in which the “202” corresponds to the number of loops in the piece.

The circular loops allude to information and electricity, which is “just a loop. It goes out, it activates something, it comes back,” he said.

Some have personal meanings embedded in them — “Books of Closure L-360” is a set of three books in an unusual “closed” form, each in a different color. They’re in reference to three relatives who have died — his parents and his older brother. The fact that 360 loops went into the piece was a meaningful accident.

He created a series of sculptures that interpret the butterfly effect's ability to spread misinformation and “how a lie can somehow move around the world faster than the truth," he said.

The physical shapes represent one of Uram’s original hopes for the process. The butterflies rest on points of their wings, which is possible because the mold had supports that are now gone.

He’s applying the process to tiles with photographic images — he can take a picture, print a mold and then cast a tile that results in a relief. You could print anything you want, and use it in home decor or put it in a frame.

His art has undergone phases from figurative to abstraction. Before this series, he was making sculptures that stood 14 feet high, constructed from about 700 components.

Ten years ago, he couldn’t have imagined making work like this.

Albert Pfarr’s exhibition, “Vessels of Communication,” is on view at the Clay Studio of Missoula through Oct. 30. Gallery hours are Monday-Friday, 12-5 p.m. and Saturdays 12-3 p.m. Masks are required in the building.