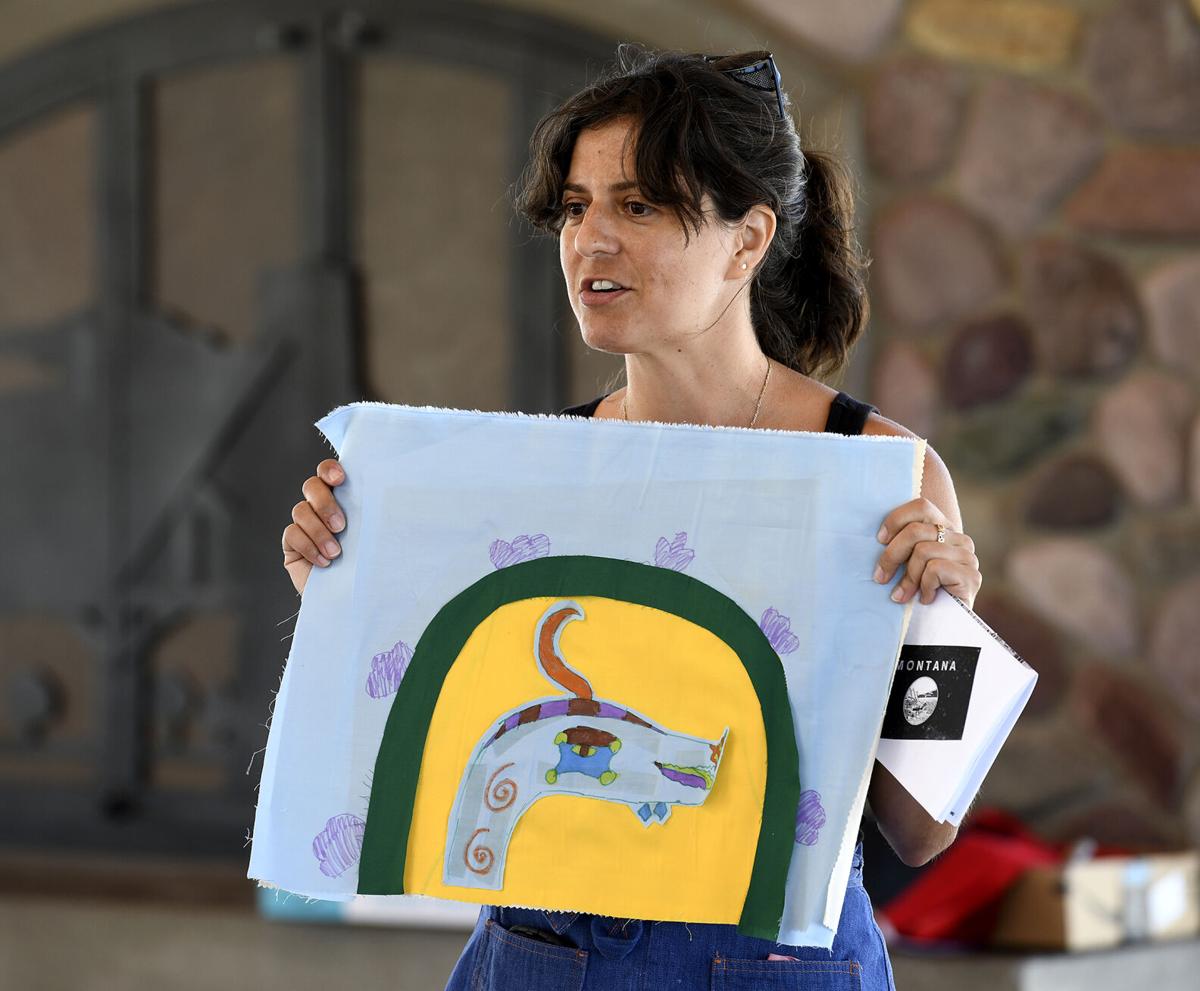 Cristina Victor shows a flag made by a young workshop participant this week in Missoula. Victor is an artist using flags as a way to explore identity, and teaches workshops where people can design flags to represent themselves. 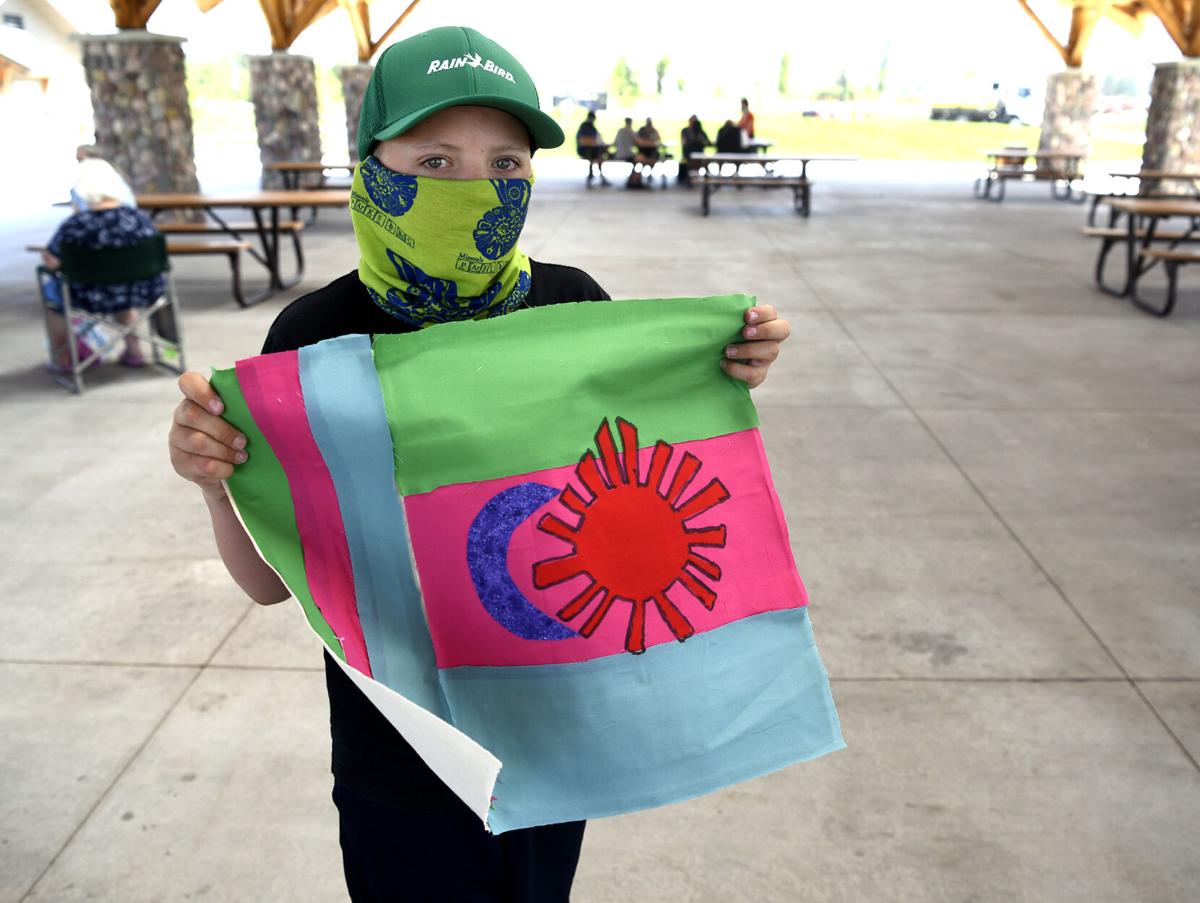 Gannon Beniger, 12, shows a flag he made in one of Victor's workshops. He liked the process so well that he enrolled in the workshop again.

Cristina Victor shows a flag made by a young workshop participant this week in Missoula. Victor is an artist using flags as a way to explore identity, and teaches workshops where people can design flags to represent themselves.

Gannon Beniger, 12, shows a flag he made in one of Victor's workshops. He liked the process so well that he enrolled in the workshop again.

Flags symbolize countries, organizations, teams, clubs. Why not a person?

"It’s a framework to start conversations that I think can be really generative about identity," said Cristina Victor.

An artist born and raised in Miami, Victor began using flags as a way to explore identity rather than denote "barriers or borders" about four years ago. Her parents immigrated from Cuba, and her work delved into her sense of displacement, her feeling they didn't belong in either place.

When she left Miami to study art in New York and San Francisco, conversations about her background became more frequent.

The art scene in the Bay Area encouraged all sorts of experimentation, including performances, in which she incorporated the Cuban flag. Then she used the flag in all her art installations. For another project, she made flags based on old matchbooks from Miami nightclubs that her parents collected in the 1980s as a way to "talk about the history of these places that are now gone, and it just kind of exploded from there."

One of her many projects now is "My Story is My Flag," which includes workshops where community members can make new, personal flags that represent "who we are now," and can "eclipse the flags that exist."

The workshops pose a question that yields endless variations: "When people are given the opportunity to represent themselves visually, what does that look like?" she asked.

Victor's latest workshop was here in Missoula the past two weeks, as part of a COVID-19-delayed art show. The Montana Museum of Art and Culture had planned an exhibition of Olympic poster prints that was postponed until next summer, when the 2021 games will take place.

Rafael Chacon, the executive director of the museum, met Victor through the North American Vexillological Association, a group dedicated to the study of symbols and flags.

The idea of an artist choosing the flag as their genre was unique, he said.

"Typically, we think of specialists designing them for institutions and causes, but she works as an artist designing flags," he said. Intrigued by her process of using flag design to represent an individual rather than a community or municipality, he invited her to bring her workshop here.

She's given several like these around the country, most often with underrepresented groups. The first was in 2016, at Oakland International High School and students who had recently immigrated to the U.S. Another, in 2018, was in Graham, North Carolina, an area with past and present white supremacist activity. It was an open call project, and a high number of participants were Black community leaders who wanted to "create images that helped make them feel more visible." After the exhibition, many of them took their flags home and displayed them in their yards.

Here in Missoula, Victor worked with her youngest participants yet — students ranging from 5-12, through the Missoula Parks and Recreation summer camp program. Due to COVID, they were conducting the projects with masks on, outdoors at places like Silver Park.

She made a small zine/workbook to guide them through the process. First, there are some rules to designing a good flag. In the professional flag design world, this is somewhat controversial, she said, but there are certain things that work.

Here's how she breaks it down for her workshops:

Keep it simple. Meaningful symbolism. Use two to three colors. No lettering or seals. Be unique. The final, and perhaps most important one: Break the rules.

To start, the students had to do some wordplay.

It's "an opportunity for them to talk about themselves in an uncensored way," she said.

"They’ve all been spending a lot of time with their families, and in nature, it’s all sort of surfacing as the important things that they want to make their flag about," she said.

Common themes in this group are family, pets and nature. Setting aside the age bracket and the obvious importance of those, she wonders if the pandemic and so much time at home played a role.

You can think of a flag as "symbolic narrative," she said.

They assign colors to those ideas, and then symbols, and sketch out several smaller designs before moving on to enlarged flags constructed with strips of fabric and cut-out shapes that would be ironed into place by Victor.

Gannon Beniger, 12, produced a flag with two sets of stripes accented with a red sun and a purple crescent moon. The sun represents his family, the moon his dogs. The green stripe is for his friends, the pink for bicycling, and blue for hiking. ("I do enjoy hiking with my family," he said.)

He said he liked the help from Victor and her team of Parks and Rec staffers coming up with a design and reworking it.

"It just flows in the wind," he said, pointing out the longer horizontal stripes accented by a shorter strip of vertical ones.

Victor said that some kids choose fantasy elements, and they don't have to be serious.

Oona Berthelson, 6, chose to make a landscape flag (she really likes nature). She wanted a "really fun and playful look," with a black portal ("kind of like a Minecraft drawing.")

Eight-year-old Kesleigh Lorenzen's design is inspired by her and her family's love of the Pride flag. She augmented a set of rainbow colors with a space for red circles (her dad's favorite shape and color), along with a yellow cross on a green background.

The final step won't take place here in Missoula. Victor will pick the strongest designs and send digital images to a professional flag manufacturer. Next summer, full-size, weather-proofed symbols will fly outside the museum while the show is open, and the kids' workbooks will be on display as well.

She hopes they'll get to "recognize their flag, and feel a sense of pride to display them publicly."

She wishes the workshops could become a full-time project, taken all over the U.S. Creating a personal emblem, and being able to edit and change it and display it, is an expressive act that can benefit anyone, regardless of age.

"It helps give them agency to do this in other spaces in their life," she said.