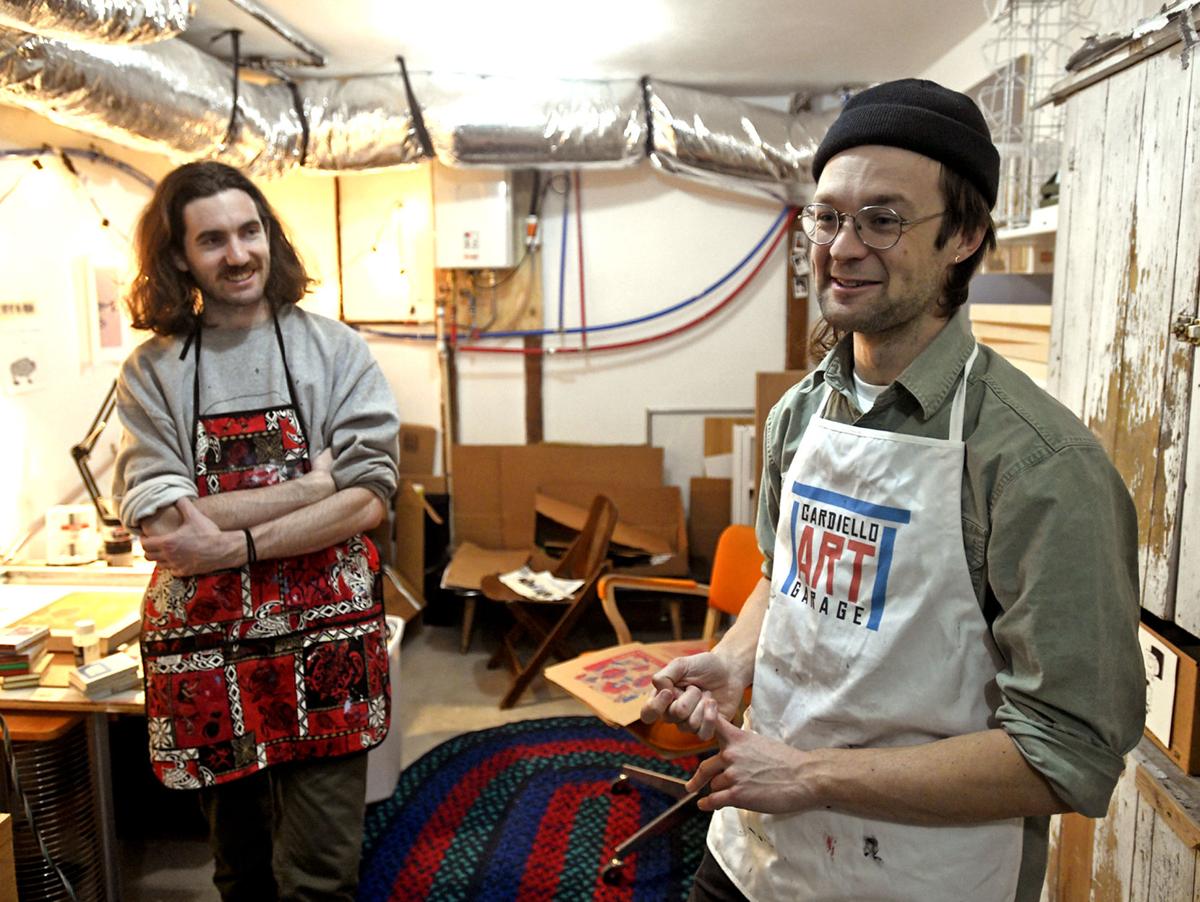 Jon Cardiello, left, and Sanders Smith, members of the Missoula band Wrinkles, started their own DIY record label, Anything Bagel in 2018. They screenprint the album art for limited edition physical releases on cassette, CD and vinyl. 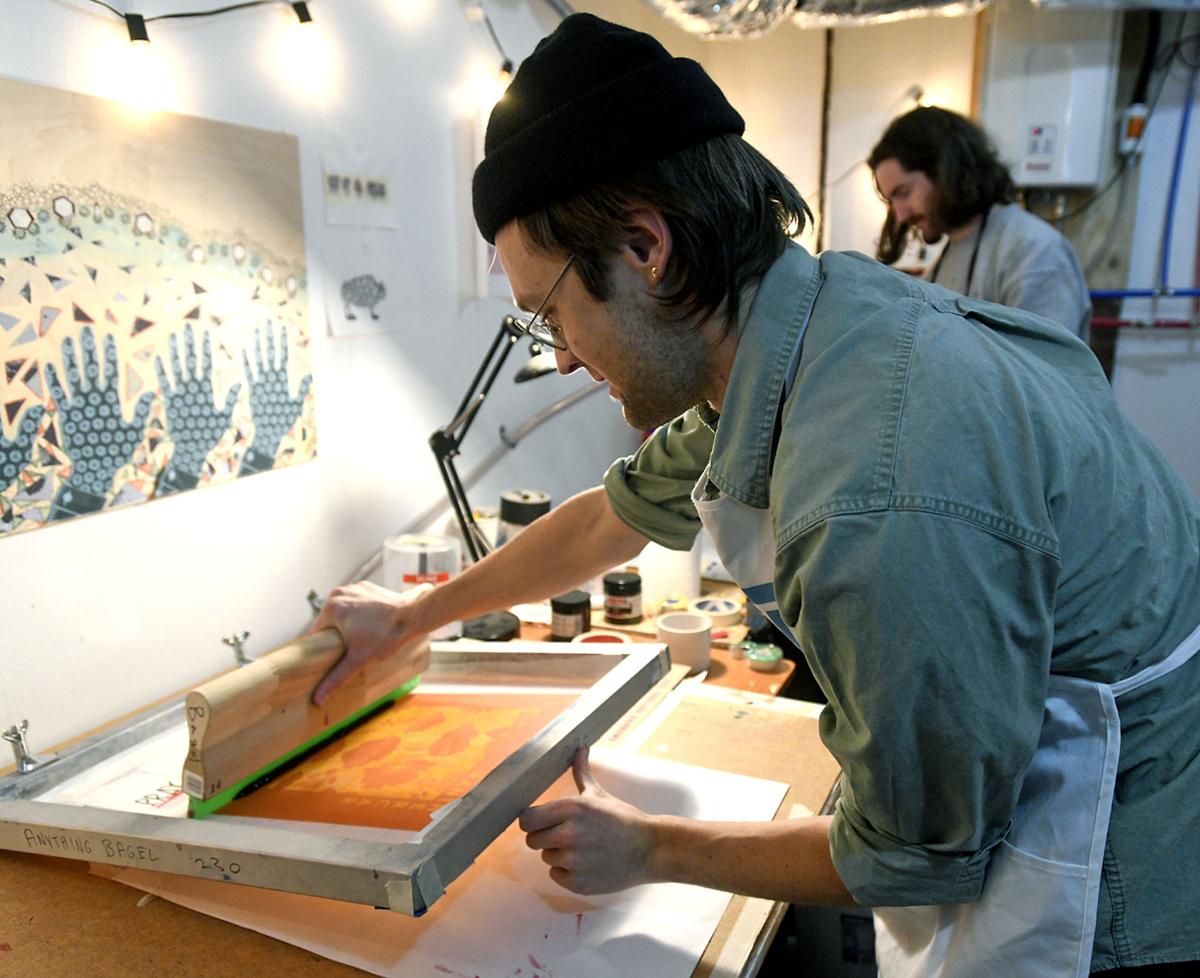 They print themselves in a basement, do-it-yourself studio space. There are easier ways to release music "that would be so much less time-consuming and make so much sense for something that doesn't make any money back, but we find that this part is the most fun for us, too," Cardiello said. 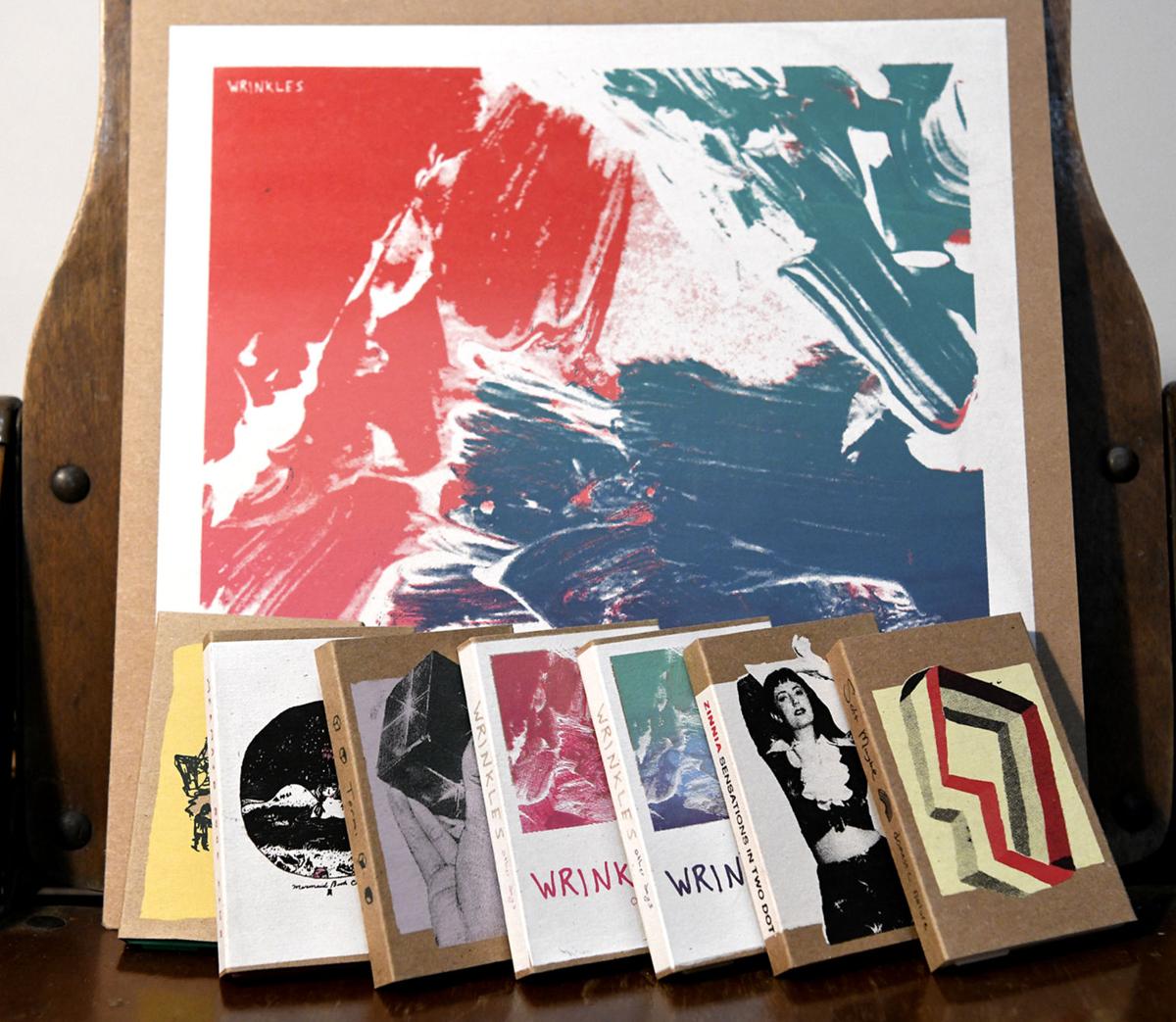 The label releases albums, mostly by Montana bands, with different variations of the artwork depending on the medium.

Jon Cardiello, left, and Sanders Smith, members of the Missoula band Wrinkles, started their own DIY record label, Anything Bagel in 2018. They screenprint the album art for limited edition physical releases on cassette, CD and vinyl.

They print themselves in a basement, do-it-yourself studio space. There are easier ways to release music "that would be so much less time-consuming and make so much sense for something that doesn't make any money back, but we find that this part is the most fun for us, too," Cardiello said.

The label releases albums, mostly by Montana bands, with different variations of the artwork depending on the medium.

The album has already been reviewed and is streaming in full at Various Small Flames, a website in the United Kingdom that writes about DIY music.

Back over in Missoula, in a basement in the lower Rattlesnake, the album's physical packaging is getting produced by hand in the very DIY headquarters of Anything Bagel, a micro-label working out of a basement rental.

Jon Cardiello and Sanders Smith, the label's founders and sole employees, have arranged side-by-side screenprinting stations. Panther Car designed the artwork for the digital version, which resembles a vintage 1980s book jacket, with wrapped text and a floral fabric design in the center, which Cardiello then adapts into different three-color screenprints for the vinyl sleeves and the cassette jackets.

Naturally, the albums go online, too, via Spotify, Apple Music and Google Play, where they vie for attention along with thousands and thousands of other new releases posted each Friday, and where they'll yield a royalty check that might reach into double digits if they're lucky.

That can be discouraging, Cardiello said, "which is also why I feel like putting in the time to make these cool physical objects feels really worthwhile. 'Cause then at least 50 people or whatever have this physical, nice reminder of that album."

"Pomegranate" is the seventh release for Anything Bagel, a play on the name of one of Cardiello's favorite snacks, since it debuted in fall of 2018. He and Smith, both 20-something natives of Helena, started playing in a post-punk band called Wrinkles here in Missoula. When Cardiello was readying a new album of his own, under the name Bombshell Nightlight, he and Smith decided to form a label.

They admire small tape labels like Lost Sound Tapes in Seattle, or Mt. Home Arts, a music and publishing company in New York, that packages its albums in alluring, handcrafted artwork.

"It was almost like it didn't matter if you had a cassette player," Smith said. He didn't even own a tape player yet and he bought one. "They were just gorgeous prints," he said.

Because many outlets like these are regional, and they were making music the Northern Rockies, they felt like perhaps they needed to start their own version.

"It seemed like the easiest way to be a part of something like that was to start doing that — make a thing," Smith said. Labels like these have small rosters that feel "cohesive and nice," with a "collective feel."

Cardiello's album, "Placid Lake," came with a small booklet with notes about each of the songs in his own handwriting. The cardboard sleeve had an evocative, expressively scrawled drawing of figures near a forested lakeside. It's worlds away from the clunky, easily cracked plastic jewel cases that protect most compact discs.

Another feature of this project: They wanted to make art. They're friends with Missoula screenprinters like Foster Caffrey and Max Mahn, and Cardiello had taken some screenprinting classes. They sought help from Patricia Thornton, who runs the print-shop at the Zootown Arts Community Center.

"This felt like a way to do both things: make a label and have an excuse to learn how to screenprint. And it's been fun, a little bit of a challenge, but fun," Smith said.

They don't hide the do-it-yourself learning part of the venture, and revel in talking about it. (After a test print came out OK, they both said "cool" in unison, drawing out the vowel sound to the equivalent of about 20 letters.)

For each release, they typically make 50 cassettes with jackets that have two- to three-color screenprints, plugging away in the basement after work or dinner. In the summer, they might move their set-up outside to the yard.

The cassettes cost $5 each, plus a download code, and Smith pointed out that it's difficult to find any kind of screenprint with that many colors for only $5. At that price point, it's marked down as an art object, never mind the music. Vinyl might be a very limited run of 20 to 50, and if they need more they can have them made professionally. Some artists want CDs as well.

The bands themselves get to decide on the artwork. So far, they've released music by their own projects or by friends. Wrinkles put out their second album, "Other Days," last year. (Various Small Flames described it as "a record that allows the joyous and the difficult to exist side by side, the celebratory energy bubbling to the surface no matter what.")

Smith released a warm, approachable album, "Domestic Nature," under his solo project, Soft Maybe, last year, too. They also have a synth, pop-leaning record, "Sensations in Two Dot," by Cardiello's Toronto-based sibling Rachel, who performs under the name ZINNIA. Tormi, an ethereal and groovy Missoula project led by singer and multi-instrumentalist Molly Buchanan, had such a distinct sound that Smith and Cardiello asked her if they could put out the self-titled record. ("I got goosebumps listening to it at one point," Smith said.) Mermaid Book Club's "Relatable Content" was a positive-minded and sharply written debut by an all-female group.

They've been acquainted with Panther Car for a long time — one of the band's guitarists, Connor Smith, was a year ahead of them in high school in Helena. They told the band they were interested in putting out their record more than a year ago.

"They're super involved and want to make it a special deal," said Scott Merenz, the band's lead singer and guitarist.

Through Wrinkles' tours, some of which have been five to six weeks, they've made numerous connections with like-minded bands around the United States that will stop in Montana.

"It's really novel that Missoula has its own little label that's doing these things," Merenz said.

"I think it really affects the broader music scene that comes through Missoula, even Montana."

When it comes time to promote their record, they'll have someone else vouching for it beyond themselves. "There's something to say about having representation from someone about an album," drummer Chrys Kirkwood said.

For Montana bands, physical merch matters more than streaming in some ways, since Merenz said the amount of royalties make it a "nonissue," financially speaking.

One tour, they can sell some copies, maybe have a conversation and build a little community over something tangible.

"It's really nice to be able to pass on a tape or vinyl. 'We made this, this is what we're about,'" he said.

For their part, Sanders and Cardiello said merch accounts for half of Wrinkles' revenue on tours.

"Even if you don't sell very much of it, even if it's a run of 40 tapes, if you sold half of the tapes, you'd probably make way more than you did with everyone listening on Spotify," Sanders said.

The cluster of releases in 2019 was somewhat overwhelming, and they don't plan on reaching out to any new artists beyond the like-minded roster they have. There are new records in the works from at least four bands as is.

And they're still finishing the Panther Car merchandise.

Regarding the cassette tapes, Cardiello records a master from his computer to a transceiver. Then Smith uses a one-to-one duplicator to record each side.

"Sandy does that part at his house while he watches an old action movie or something," Cardiello said.

"It's like my excuse to watch something where I really don't have to pay attention at all," Smith said.

Mahn, their friend who runs a professional shop called Twin Home Prints, has told them it would be more cost effective to do this any other way than screenprints.

Even the style of cassette label they make, with a full cardboard sleeve, rather than one that can be slipped into a plastic case, is extra work.

"That would be so much less time-consuming and make so much sense for something that doesn't make any money back, but we find that this part is the most fun for us, too," Cardiello said.

A guide to the Anything Bagel discography

You can check out the entire Anything Bagel discography on anythingbagel.bandcamp.com/music