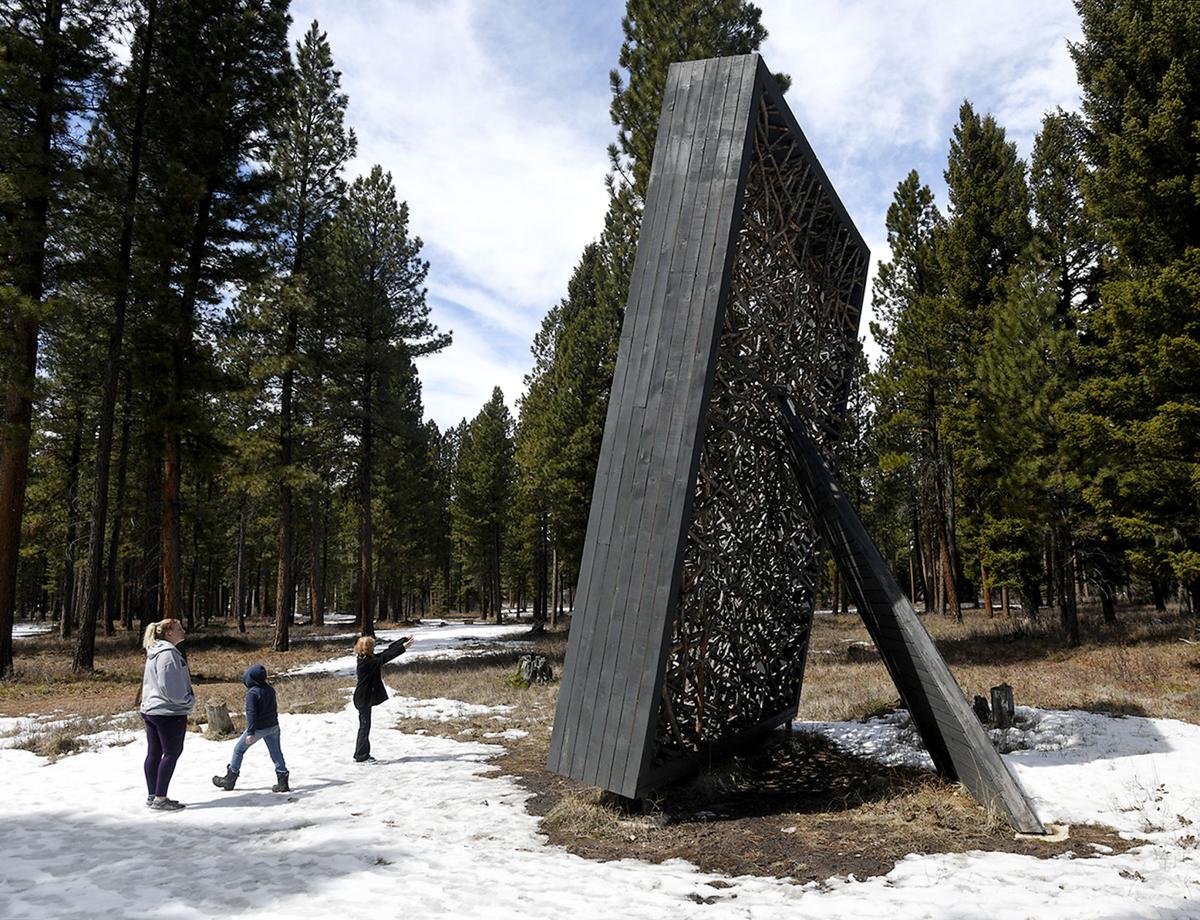 Caroline Foster of Helena and her children, Reed and Peyton, look at Jaakko Pernu's "Picture Frame" recently. The sculpture was one of the first to be installed at Blackfoot Pathways: Sculpture in the Wild in 2014. 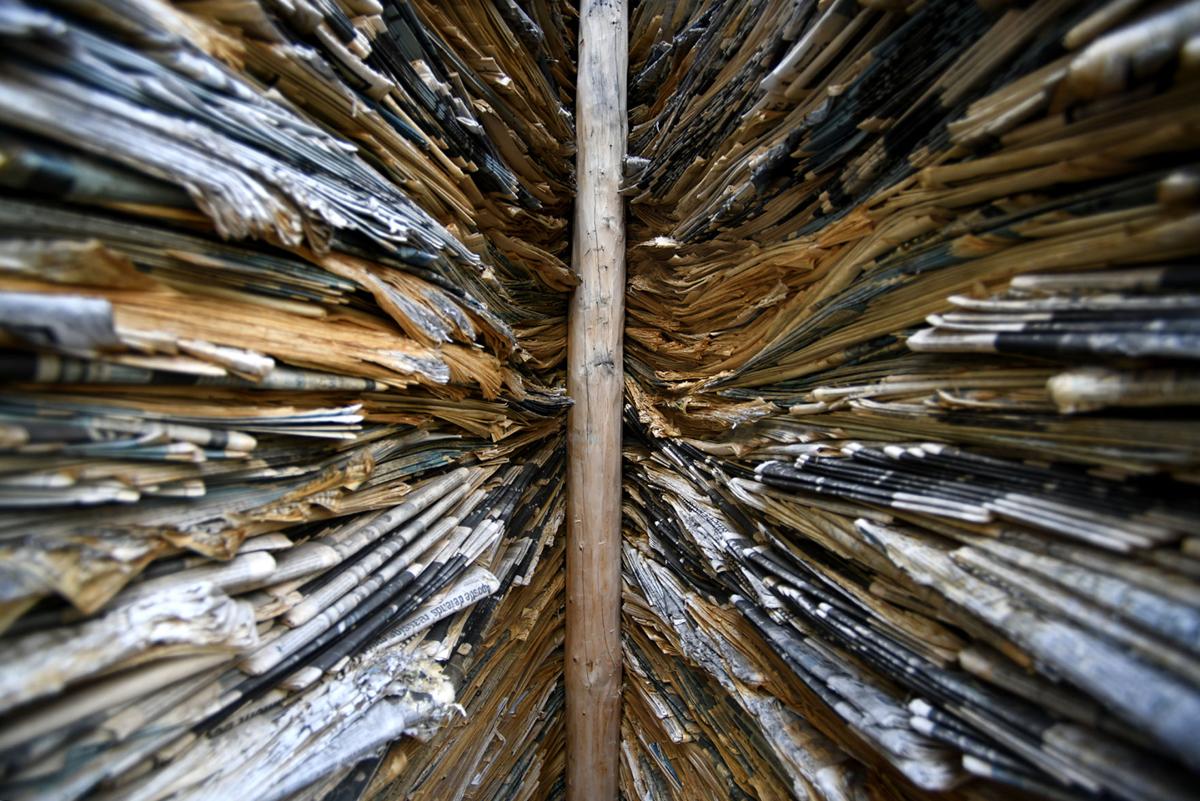 A detail of Steven Siegel's "Hill & Valley" shows some of the 30,000 pounds of newspaper used in the sculpture. 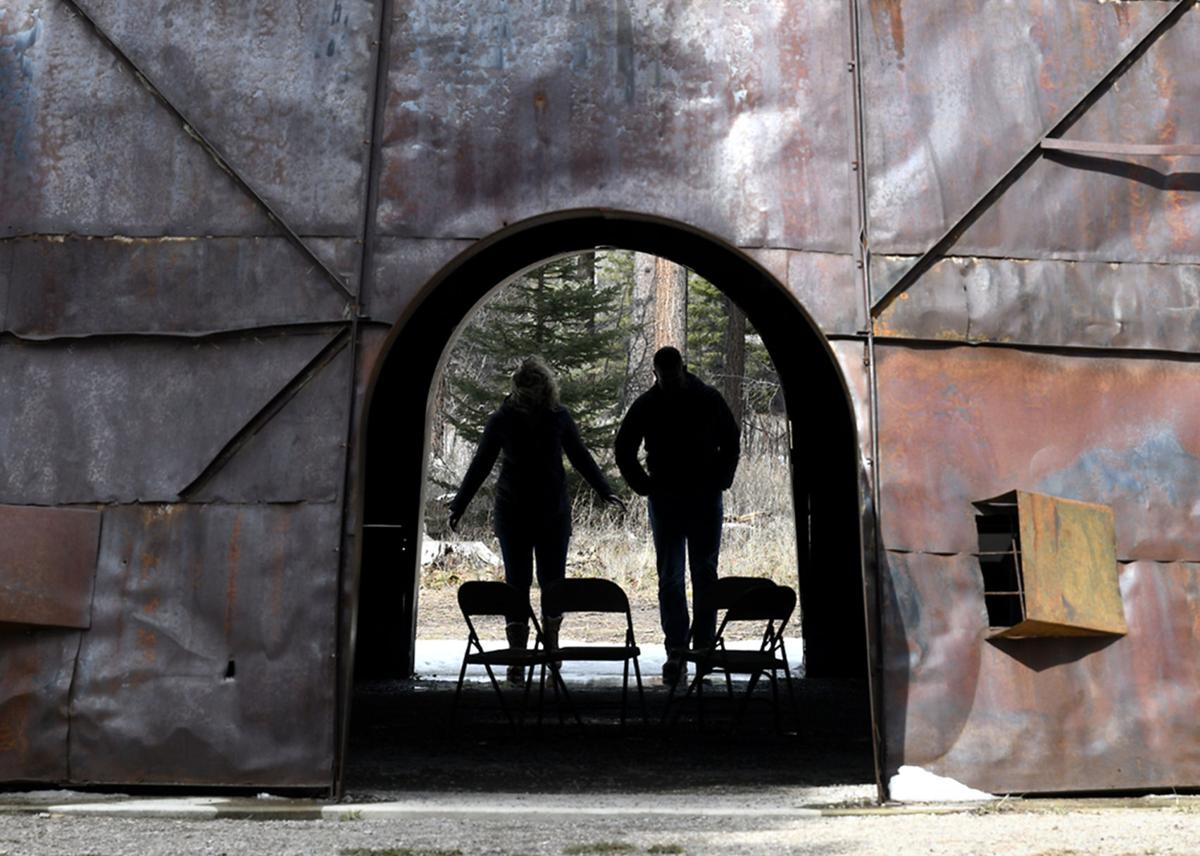 Amy Jaidy of Missoula and Scott Luly of Shelby walk into "Montana Memory" recently. Inside the sculpture are historic photographs of the timber industry. 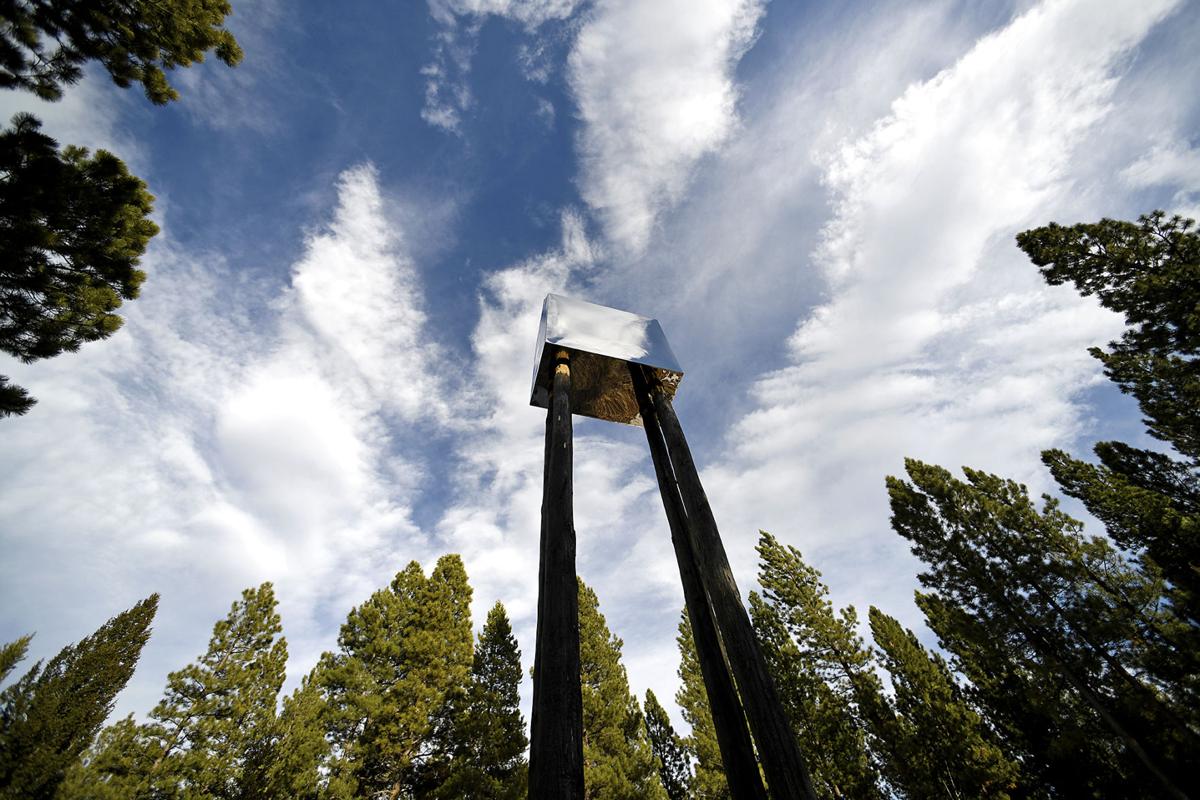 Alan Counihan's "House of Sky" is framed by trees at Blackfoot Pathways: Sculpture in the Wild recently. The artist took the title of the stainless steel, steel and pine sculpture from author Ivan Doig's memoir. 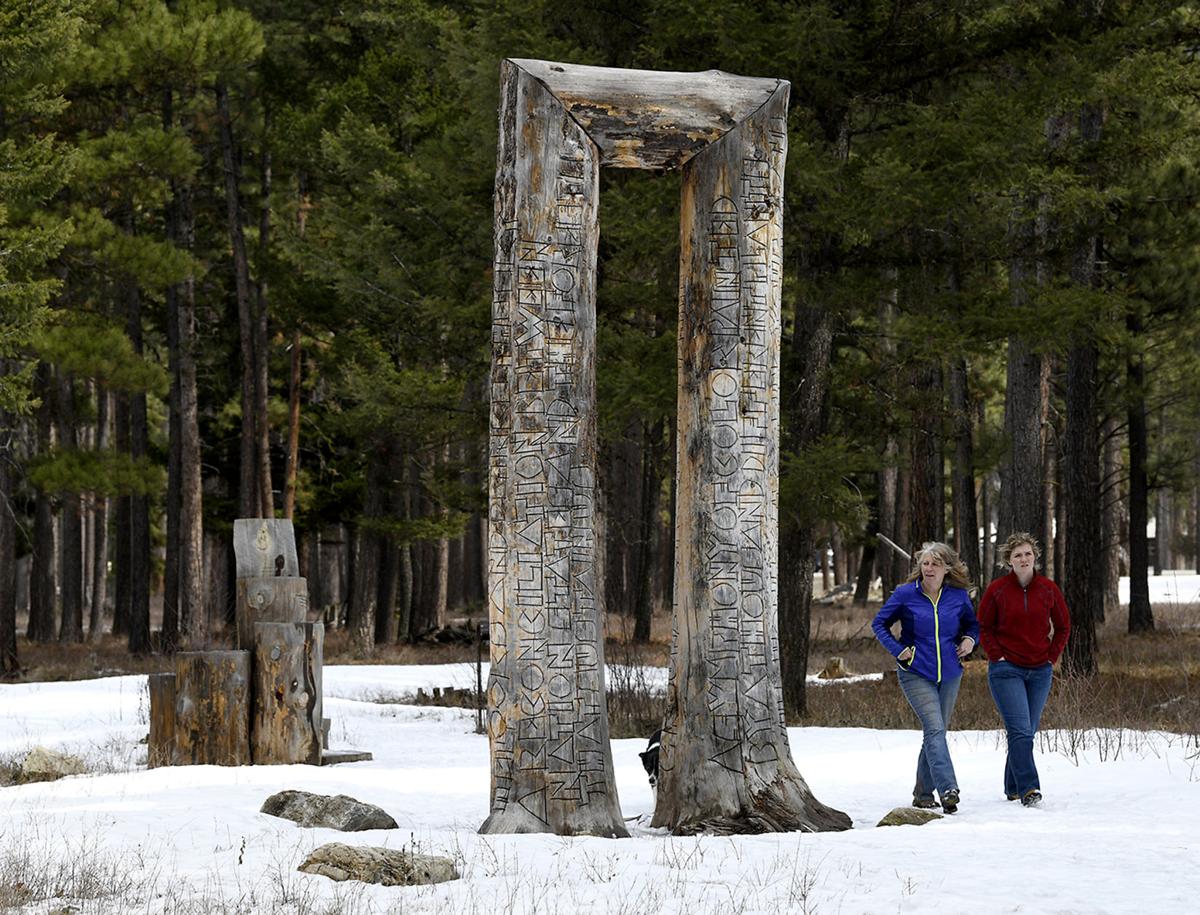 Stacey Mannix, left, and her daughter Ashley walk by artist Jorn Ronnau's sculpture "Gateway of Change" at Blackfoot Pathways: Sculpture in the Wild recently in Lincoln. The sculpture park is one of the few places not closed because of the COVID-19 pandemic where art can be viewed in person. 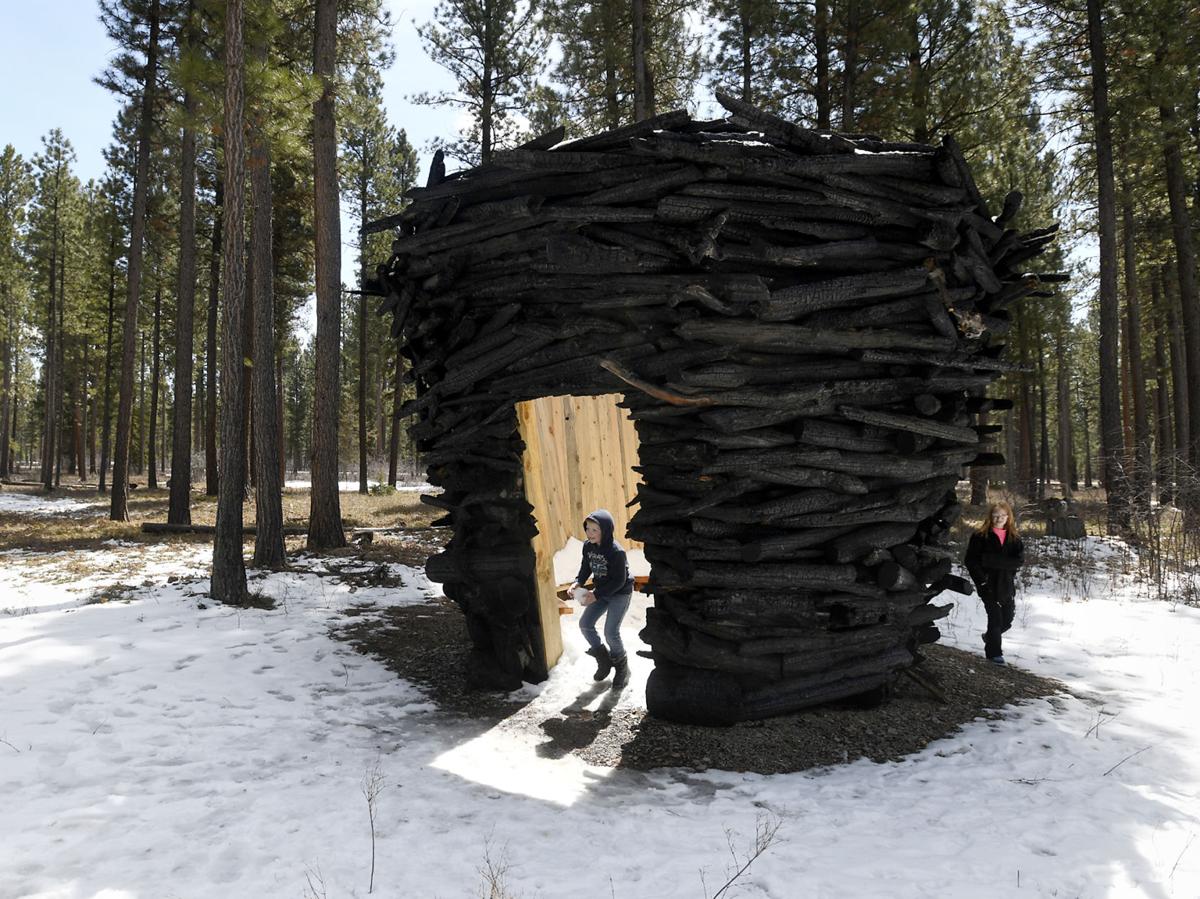 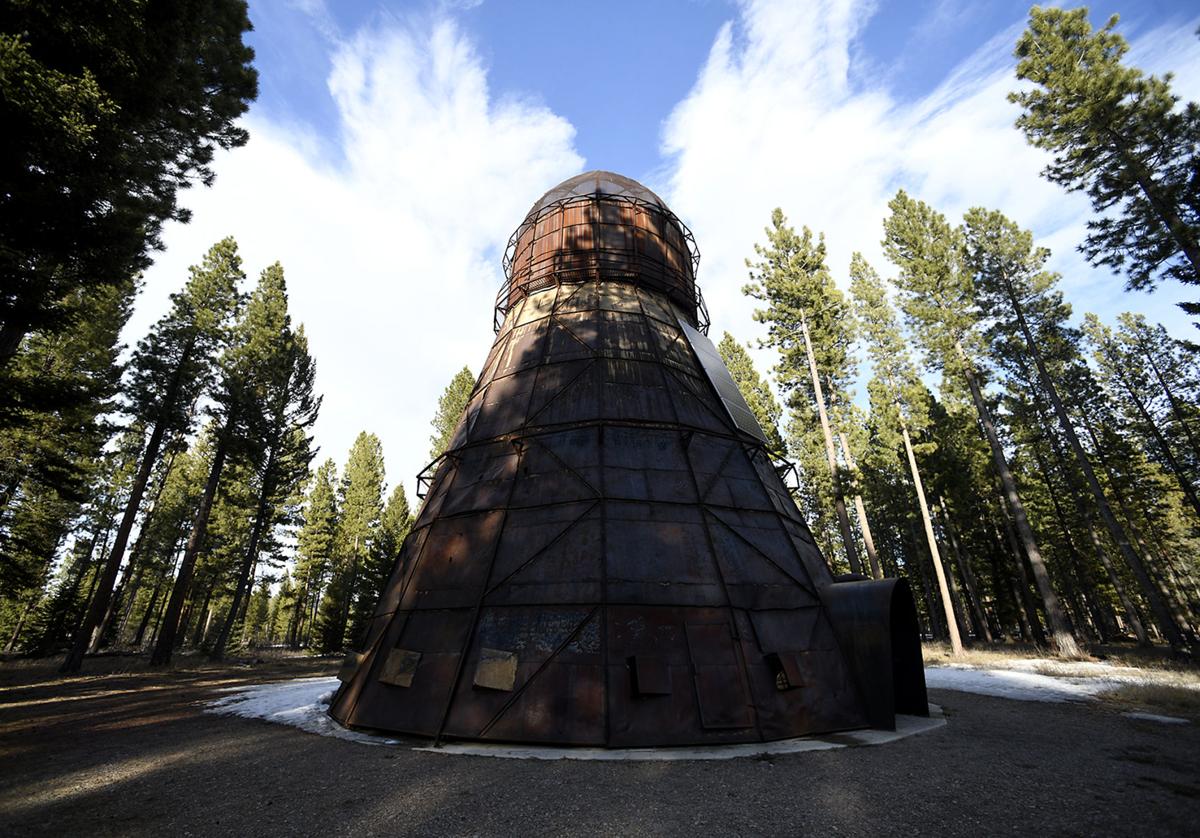 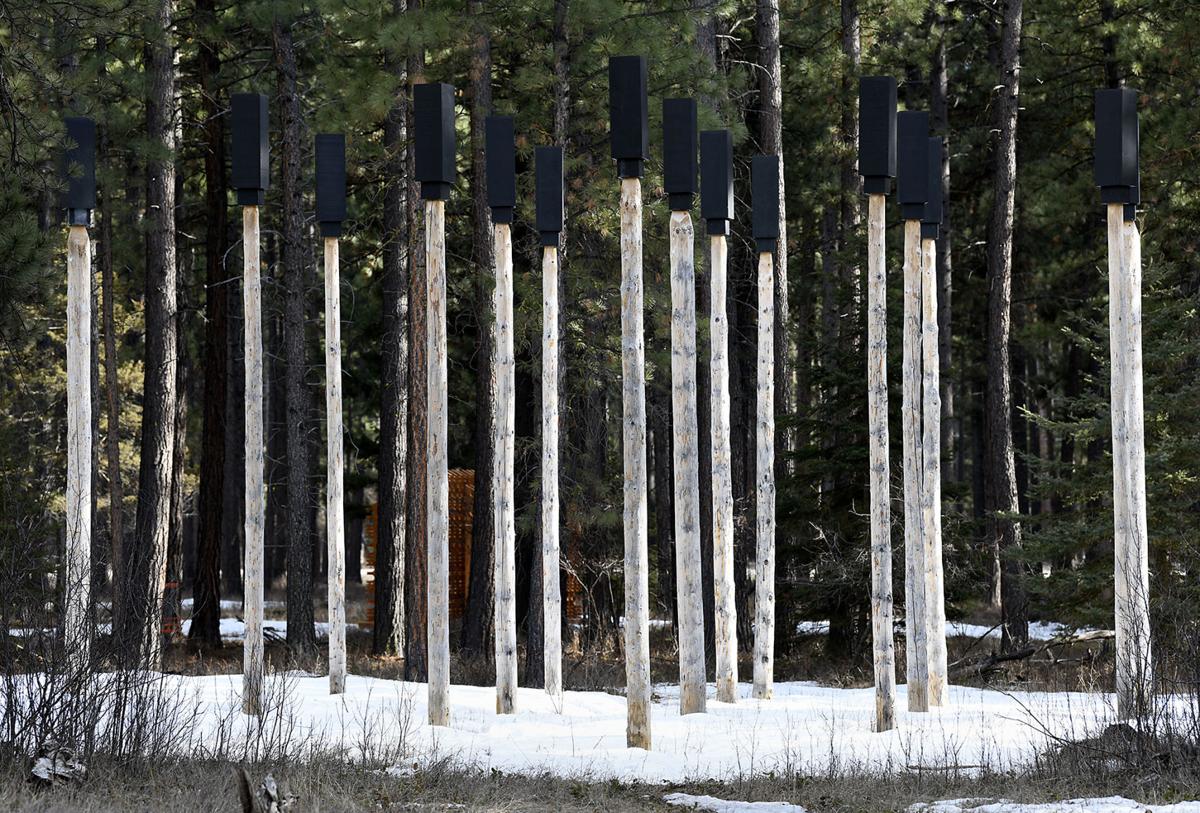 Tyler Nansen's "Bat Beacon" was installed in the sculpture park in 2016. 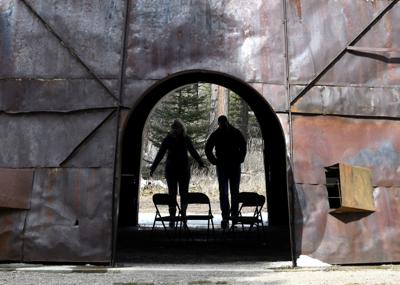 LINCOLN — The most socially distant place to see art in western Montana is hidden from view just off the highway here, where towering sculptures of metal, wood and in some cases, newspaper, emerge from the treeline on a walking loop, enough to fill an hour or so in which life appears and feels as normal as it ever was.

On a sun-filled weekday recently, the parking lot at Blackfoot Pathways: Sculpture in the Wild was occupied by about five vehicles, but you’d have to go out of your way to run into any other people, let alone get within six feet of them.

That was part of the appeal, along with a break for fresh air, to Caroline Foster, who drove over from Helena with her two young children, Peyton and Reed.

They wanted to “get out from the quarantine” that they’d been under for about a month.

They picked along a path that transitioned back and forth from mud to melting snow, stopping to see the modern but earthy sculptures constructed by artists from around the world who have been invited to work at the park. It was founded by a group of local residents and director Kevin O’Dwyer, an Irish artist who developed a model where art parks can revitalize areas by alluding to their heritage and environment.

In the case of Lincoln, that’s logging and sawmills. Accordingly, all the sculptures feel like they fit in the area, from the iconic tepee burner-turned-community center, and are appreciated by locals, rather than foisting contemporary art upon them that has little to do with their town.

Peyton and Reed skipped around “Tree Circus,” a whimsical piece that resembles a storybook castle sketched in branches. North Carolina artist Patrick Dougherty and a crew of volunteers spent weeks quite literally weaving the piece together from tons upon tons of sticks, sometimes in cold and rainy weather.

It’s a favorite for Stacey Mannix, a schoolteacher in Lincoln, who brought her daughter Ashley out to the park for her first visit. “It’s kind of magical,” she said. It reminds her of something you’d see in a Harry Potter film. She especially likes it in the winter, when her outdoor club comes to ski through the park on the groomed trails.

Local kids love the sculpture, too, she said, and often get their school pictures taken in front of it. The park brings classes in to work on projects, and she said there’s a feeling of pride and ownership in the park since they’ve grown up around it. There are no locks, gates or attendees at Blackfoot Pathways, meaning it's technically open 24-7, yet the pieces don’t show signs of misbehavior like graffiti that befall public art in other cities.

Not far away, the Foster kids couldn’t resist getting a close look at “Clearing,” a 13-foot-high sculpture by Alison Stigora. The Pennsylvania artist came to Montana last fall to build the reverse-conical sculpture from burned logs. While the outside appears blackened and somewhat intimidating, there’s a bright open entrance to the interior, where you can sit on clean wooden benches and catch sun from the open roof.

Sculptures for the seasons

Since its founding in 2014, the park has invited artists to come out every summer and add to the collection. Each sculpture is spaced out in the stands of trees to give it room to breathe.

Stigora’s fellow 2019 alumnus is Stuart Frost, a British artist now based in Norway. His piece, “A Place is a Place is Place,” is easy on the eye and long on the guesswork — it's one of many sculptures that stir how’d-they-do-that questions. Its overall shape resembles a long house, albiet one made with rows of tall boards cut with jigsaw puzzle-like edges. For those inquiring, he designed a scale model, had it laser cut, and hired a shop in Helena to fabricate the full sculpture.

Those pieces bear the winter in the open. Other, older pieces that aren’t visible to off-season skiers or hikers were emerging for springtime. United Kingdom artists Mark Jabbs and Sam Clayton’s “East West Passage” disappears under the snow. The two dug a zigzag trench about 4.5 feet deep and 100 feet long and lined it with lodgepole, letting you walk for a stretch and see the forest from closer to ground level.

A few days of 60 degree weather had uncovered half of Chris Drury’s “Ponderosa Whirlpool,” which is just what the title indicates: a spiraling form of logs some 46 feet in diameter.

Others look like they shouldn’t hold to the elements well, but they do. New York artist Steven Siegel’s “Hill and Valley” is a wall of stacked newspapers that traverse a dip in the ground, like a protective barrier of reading material. He and volunteers built it from 30,000 pounds’ worth of back issues of local publications.

When compressed, the paper won’t deteriorate for decades. The exposed edges, will, though, and you can make out parts of headlines and bylines.

The next two artists, No. 18 and 19, are going to be Bently Spang, a Northern Cheyenne artist from Billings, and Michael J. Brolly of Philadelphia.

They’re tentatively booked for September, according to Becky Garland, the board president of the nonprofit that runs the park. She said people should check their website to find out what programs and classes are moving ahead or postponed. Their fundraising this year has been strong, although their plans for the annual benefit in the fall are fluid like everything else these days.

"I get a lot of phone calls making sure that we are open, and of course all we can do is ask them to be respectful of others’ space and of the governor's directives,” she said.

Regardless, it’s open and has plenty of personal space, one of the nice parts about living in Lincoln, she said.

"It’s a good place to get your mind off what’s going on,” she said.