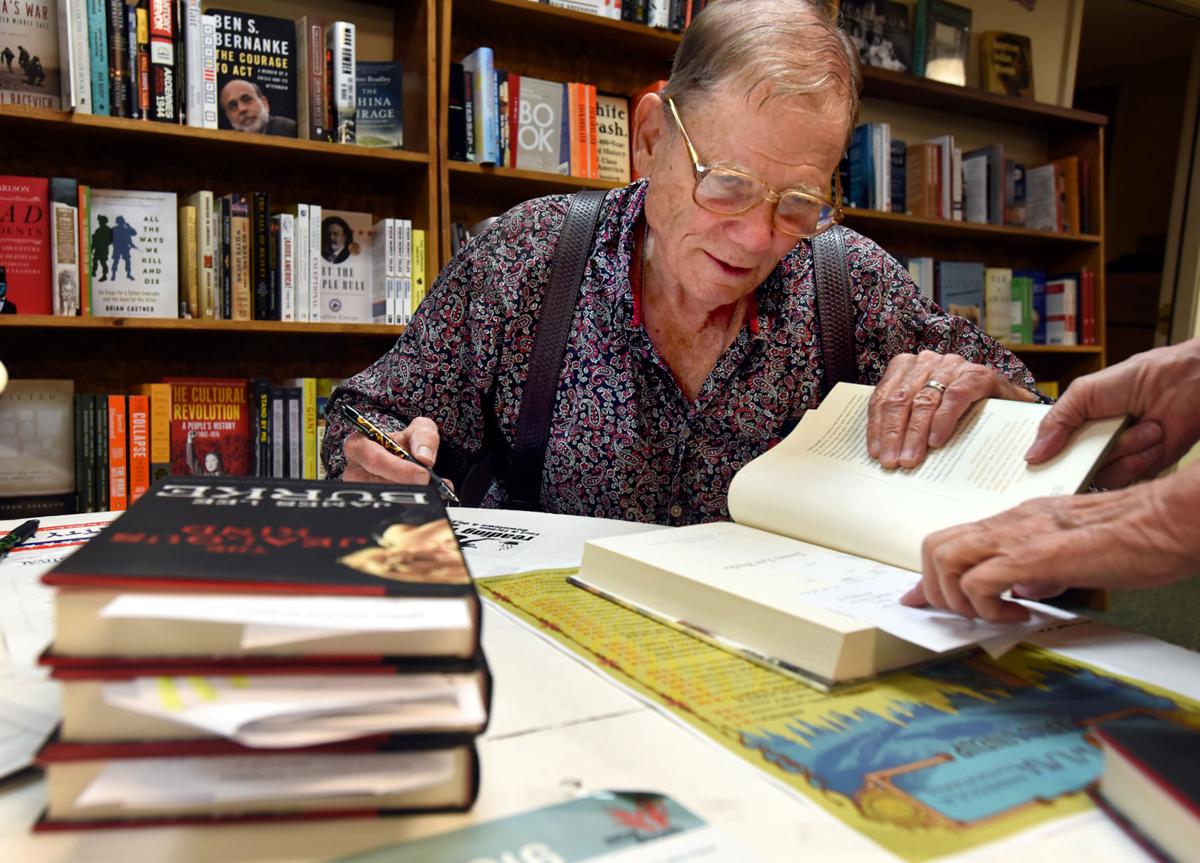 James Lee Burke signs copies of his new book in 2016 before a reading at the Fact and Fiction Bookstore in downtown Missoula. Each year, Burke autographs thousands of copies of his new novels before release day and his customary signing at the store. 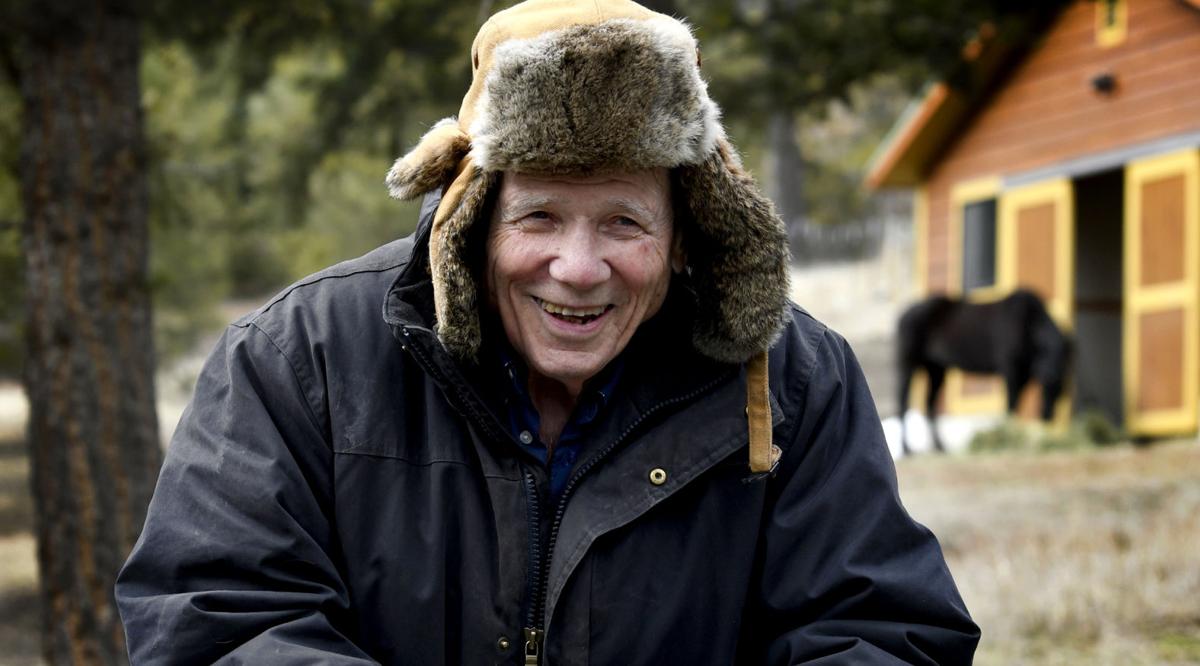 Burke pauses during the daily chores on his ranch near Lolo in March.

James Lee Burke signs copies of his new book in 2016 before a reading at the Fact and Fiction Bookstore in downtown Missoula. Each year, Burke autographs thousands of copies of his new novels before release day and his customary signing at the store.

Burke pauses during the daily chores on his ranch near Lolo in March.

It’s a cold, clear morning in late November at an undisclosed warehouse in Missoula, Montana. Inside, a large conference table is laden with stacks — close to 100 copies — of the latest James Lee Burke book, “The New Iberia Blues,” carefully arranged around a chair at the table’s head. They are a mere fraction of the total; there are three pallets of brown boxes, 20 to a case, 2,300 books in all. All bear a bright red sticker that warns, “Do Not Open Until January 8, 2019.”

I’m here to open them anyway, every box, unload each book, and facilitate Jim Burke’s signing of every single one. Then they will go back in the box, back on the pallet, and be sent back to Burke’s publisher, Simon & Schuster, who will divide them up and ship them out to bookstores all over the country.

Missoula-based Mountain Press is the facility graciously offering its space to facilitate getting all this work done. Just before 9:30 a.m., down the hall I hear the front door open. Burke has arrived. He has warm hellos for Jack, the shop cat who has the run of the place. There is a dog demanding attention, too, a golden retriever named Corwyn. Burke has plenty of love for him as well, not to mention smiles, greetings and handshakes for any of the Mountain Press employees that happen by. Everyone is happy to see him.

Jim shakes my hand when he gets to the conference room. He asks after my previous week’s Thanksgiving festivities, then shrugs out of the heavy winter parka he’s wearing — it seems he could fit three of himself inside it — and breaks into a blister pack of black pens from Costco. With little fanfare he sits down and commences to sign books. He does this with almost military precision, and it is all I can do to keep up. It will take us somewhere close to 12 hours to get all the books signed, including time for lunch breaks, bathroom breaks, photos with the pets, etc., divided up over three days.

It is no small effort. I work up a steady sweat making sure Burke never has to wait for a book while keeping the table loaded and signed books boxed up and re-stacked. It is worth it, though, because the conversation is scintillating. We talk books, movies, politics … James Lee Burke is a smart man, and his ability to pepper his discussions of history and politics with dates and names is almost uncanny. I don’t take any of it for granted. Over the last two or three years I’ve been fortunate to spend more time with Burke than most, and I’ve gotten to know him well both personally and professionally. He is kind and generous, the truest of gentlemen.

At this point in his career — “New Iberia Blues” represents the 22nd book in his popular series featuring the world-weary detective Dave Robicheaux and his partner, Clete Purcell, not to mention 10-plus other books he’s written starring other characters — Burke has earned the right to skip such rituals. He’s already signed 2,000-plus tip-ins (these are pages authors sign that are sewn into finished copies of books later) sent to his house to be included in a promotion for Barnes & Noble. Yet he chooses to continue putting in the time and effort, and does so with glee.

“To me, writing, or the creation of art of any kind, is the perfect life,” Burke says. “When the art becomes a task, when a person feels it becomes a burden, you should do something else, because it's a gift.”

Signing the books, personally interacting with his worldwide legion of fans on social media (he gets help from his daughter, Pamala, who serves as his personal assistant), all of these efforts are a means to honor that gift.

“Doing all this is a great joy and an honor,” Burke says, “and this is why being a writer is a very pleasant way to live. You see, my heavens, you know when you go to bookstores and there's a big crowd there wanting to hear you read and shake your hand? Well, gee whiz! It's a special type of reward that few people receive for their work.”

Burke, accompanied by his wife, Pearl, used to tour his work relentlessly. For 15 years they were on the road for every book, visiting 35 cities and all the book fairs and conferences, on each jaunt. It was exhausting, what Burke describes as the most physically demanding work he’s ever done. When he developed a case of vertigo, he decided enough was enough.

“And then this is the honest-to-goodness truth of what happened!” Burke says, breaking into a cackling giggle. “The following year, the marketing manager from Simon & Schuster called and said, 'Jim, you stayed home this year, but your sales went up 25 percent!’ Then the following year I stayed home and they went up 50 percent! Talk about humbling! I never had to seek humility, it always found me!”

Last year’s novel, “Robicheaux,” was the best-selling book, to date, in Burke’s 50-plus year career. “New Iberia Blues” is 17 percent ahead in pre-sales, so it promises to be a big success as well. The two books comprise the first installments of what Burke describes as a trilogy. Burke says the first three books in the Robicheaux series — starting in 1987 with “The Neon Rain,” followed in subsequent years by “Heaven's Prisoners” and “Black Cherry Blues” — were a trilogy as well. They were his attempt to re-tell Milton’s tale of “Paradise Lost," or man’s descent into the abyss.

The new trilogy is no less heady of a theme.

“It deals with the era in which we find ourselves today,” Burke says, “because it's is a singular one, one that's fraught with, what I feel, is great danger. In the next few years, certainly this century, we will either make the correct decisions about certain things or we're not going to make it, that's my feeling. I think we're in a critical time.”

The book is set largely in Louisiana, as the series commonly is. Burke likes to use Louisiana for the backdrop of his stories because he feels that, of all the states in the United States, it is the one that is most emblematic of the entirety of American history. Many flags have flown over it, many cultures have established themselves in the region.

“The great advantage of being there as an artist,” Burke says, “is you can touch the past, it's still alive there. The issues of today, like Charlottesville, that is simply an extension of the same problems, the same mindset, and divisiveness that existed in 1866. It's more virulent today, because it's coupled with nativism and anti-Semitism, but it's still with us. Those guys are the real deal, carrying burning sticks in their hands. I've seen no footage like that except for the Nazi party in the 1930s.”

Books signed and palleted, Burke and I make plans to meet again in a few weeks for another round. This will be a smaller batch associated with the one live book release event Burke does for every new novel, at Fact & Fiction Books in Missoula. These will be books, around 400, that have been ordered online, complete with requests for personalized inscriptions. Burke will graciously accommodate these requests from the release of “The New Iberia Blues” through February or March. After that, after all the interviews and articles and reviews are behind him, James Lee Burke will be back to finishing the next book, and we’ll crank the machine back up again next winter.

I, like the thousands upon thousands of other fans, can hardly wait.

Chris La Tray is a freelance writer and photographer who lives in Missoula and works as a bookseller at Fact & Fiction. His writing has appeared in the Missoulian and Montana magazine. His short fiction has been published in various crime, noir, and pulp collections and anthologies. Read more of his work at chrislatray.com.

James Lee Burke will have reading and signing at 7 p.m. Tuesday, Jan. 8, at Fact & Fiction, 220 N. Higgins Ave. Seating is limited — show up early if you want a spot.