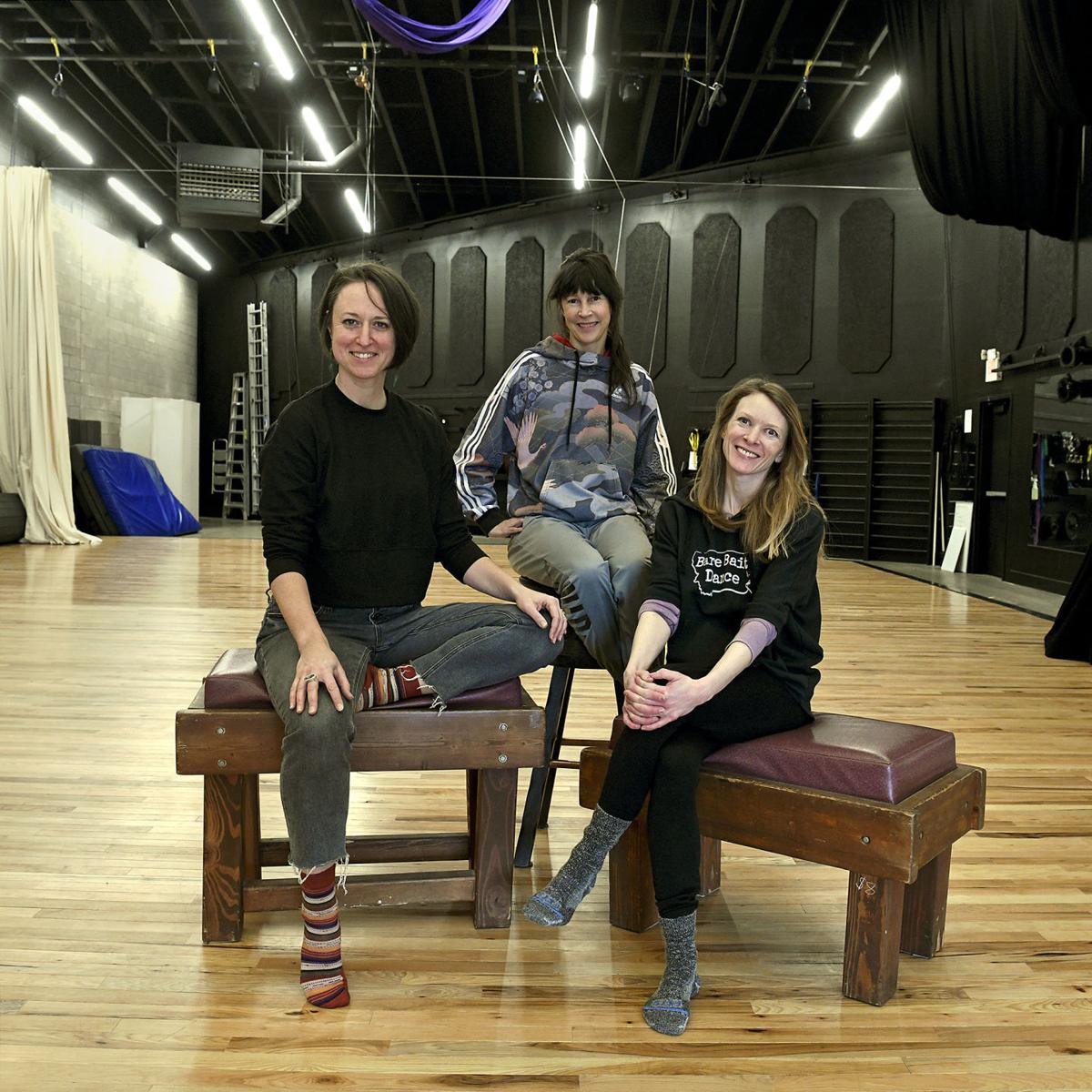 Joy French, Sally Jo Beck and Kelly Bouma, from left, sit in the West Side Theater. 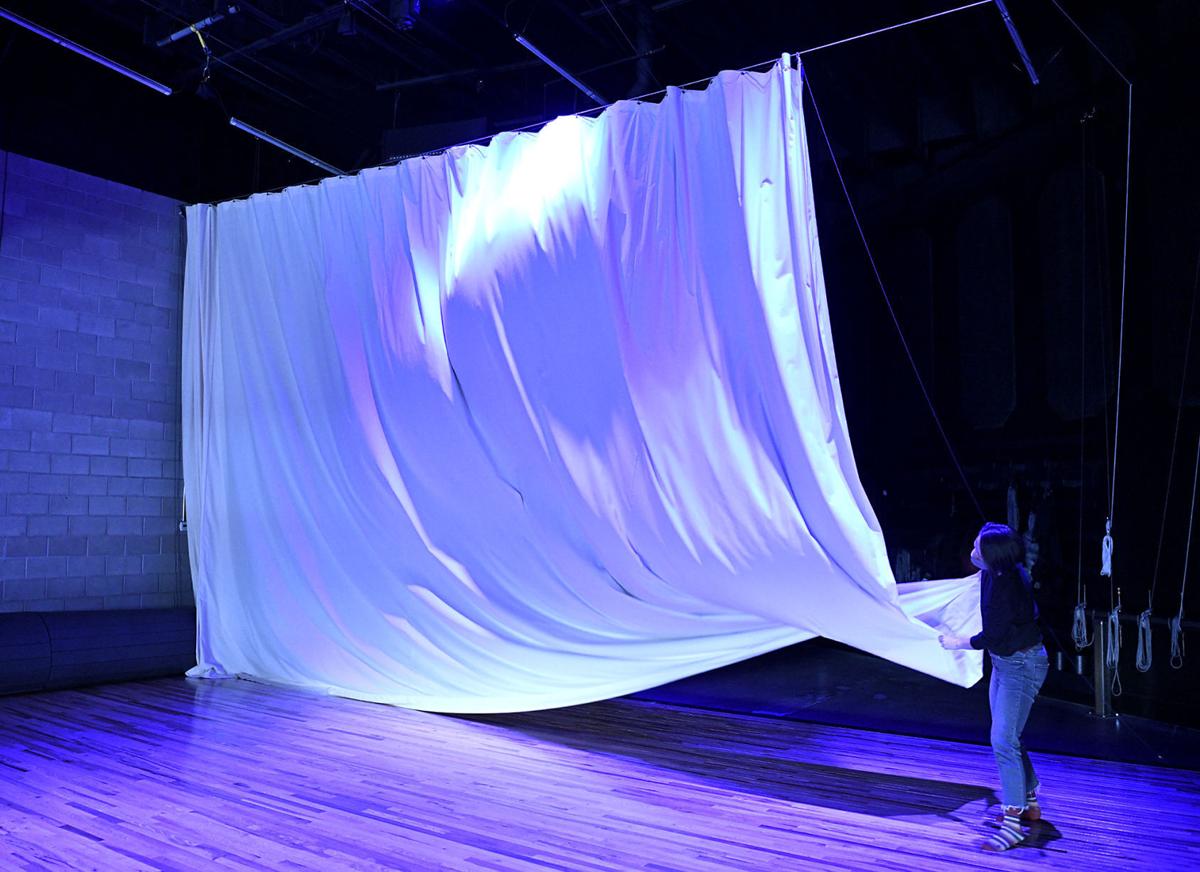 Joy French, executive director of Bare Bait Dance company, straightens one of the moveable curtains at the West Side Theater recently. 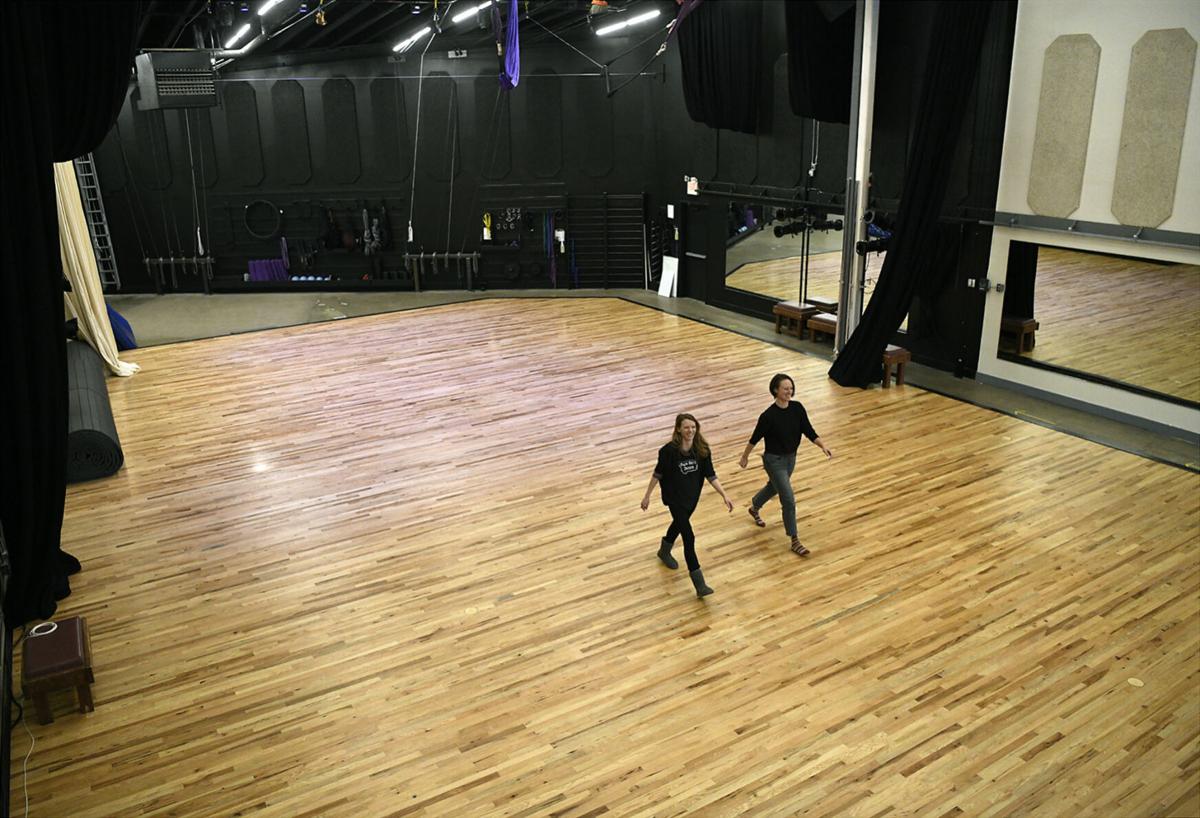 The flexible space and lighting at the West Side Theater will help Bare Bait Dance with rehearsals and productions, and create opportunities for other performance groups.

Joy French, Sally Jo Beck and Kelly Bouma, from left, sit in the West Side Theater.

Joy French, executive director of Bare Bait Dance company, straightens one of the moveable curtains at the West Side Theater recently.

The flexible space and lighting at the West Side Theater will help Bare Bait Dance with rehearsals and productions, and create opportunities for other performance groups.

Bare Bait Dance company has taken over management of the West Side Theater, a flexible performance space at Shakespeare and Defoe streets and the longtime home to aerial and studio arts.

Their vision is something like a performing arts center focused on “movement arts,” said executive director Joy French, including not only the space’s existing aerial artists, but dance, theater and fitness.

“We’re game for pretty much any kind of performance — music or comedy or theater, just as long as it can fit in our schedule,” she said.

For the dance troupe itself, finally having the chance to choreograph and rehearse in the space they’ll perform is “completely dreamy.”

In the new arrangement, French remains executive director of the nonprofit Bare Bait and longtime member/former co-director Kelly Bouma will be managing director of the theater.

Bouma hopes that it can be a hub for dance, which was lost when the Downtown Dance Collective closed at the beginning of the pandemic.

They’re looking at collaborations with dance artists and companies from outside Missoula or Montana. Within city limits, they’ve already booked several shows for local dance studios and companies that need a performance space, such as Rocky Mountain Ballet Theatre.

“I do feel like this space has the potential to bring everyone together, so at least we’re more aware of what everybody’s doing and supportive of everybody’s work,” she said.

Handing over the keys

French founded Bare Bait in 2011, initially out of a residency at the dance collective. The company, which produces a full season of original contemporary modern dance by local and visiting artists, has staged performances in venues all around the city, with the downstairs dance space at the University of Montana’s PAR/TV Center as its main stage.

In fall 2019, they produced French’s original show, “Here Be Dragons” at the re-christened West Side Theater.

Sally Jo "SJ" Beck, who co-owns the building that also houses Freestone Climbing, originally opened the theater space as a studio for aerial and circus arts. In 2019, she renamed it, with a new model to open it up to the community, which had more demand for performance space than available venues.

It’s remained busy despite the pandemic.

“Honestly, the new structure is what the community wanted all along, kind of like trying to chip David out of the marble," Beck said. "Not only has Missoula been needing this kind of space, but now we have the population to really pop.”

French said that Beck “had people in here and utilizing the space and it continued to be a resource all through the pandemic, which is really inspiring that there’s already a model.”

Bare Bait reached out to Beck about an upcoming show and they raised the idea of turning management of the space over, with the dance group building on what’s already been happening with their networks in the dance and theater communities.

Bouma said that the space’s high ceilings and sprung dance floors are features you can’t get anywhere else. They feel that they’re adding something to the mix rather than competing with other, existing venues.

Beck’s renovations already included the high ceilings, lighting, curtains and more. They’re looking at some changes to accommodate audiences, such as an additional bathroom and seating options. The current maximum capacity is around 160.

They’re starting an Artist Lab collective, where creators can pay an affordable membership fee to get access, which can give them “space and time to work on their creative process,” French said.

They’re also thinking of residencies and a presenter series to support new works. Alex Payne, Beck’s production manager, will stay on as a resident artist and produce shows with his new company, Lamplighter Entertainment.

The space will allow Bare Bait to host more classes, both their own and from independent instructors.

For Bare Bait’s productions, it means finally having a home base for its rehearsals and performances.

Creating a show, rehearsing it and then staging it in a single space is a huge difference for them. The dancers will be familiar with the layout before technical rehearsals, helping to remove a layer of show-week anxiety, French said. Rehearsing will be simpler if they have a dedicated space rather than several, which required moving props from place to place, or rehearsing without them.

As a choreographer, it adds more layers of creative potential.

“I can literally build things in the space — we could bring in more props and sets,” she said.

For instance, “Here Be Dragons” involved a canoe suspended from the ceiling, which was challenging to pull off in a short period of time.

They can now rehearse with all those technical elements far in advance, and have more time to develop lighting designs, projections or anything else they’d like to experiment with — she said dance as an artform is becoming more “interdisciplinary.”