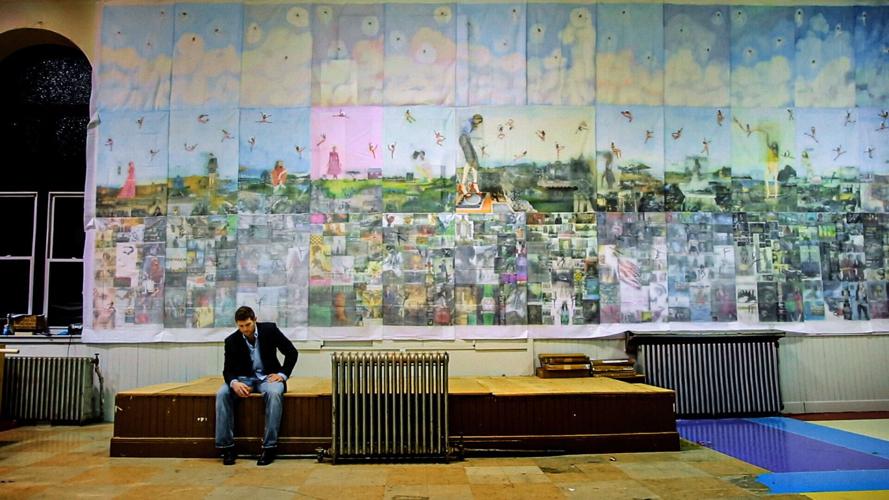 "Krimes" is a portrait of Jesse Krimes, an artist who created a massive multi-panel mural on prison bed sheets while he was in prison. 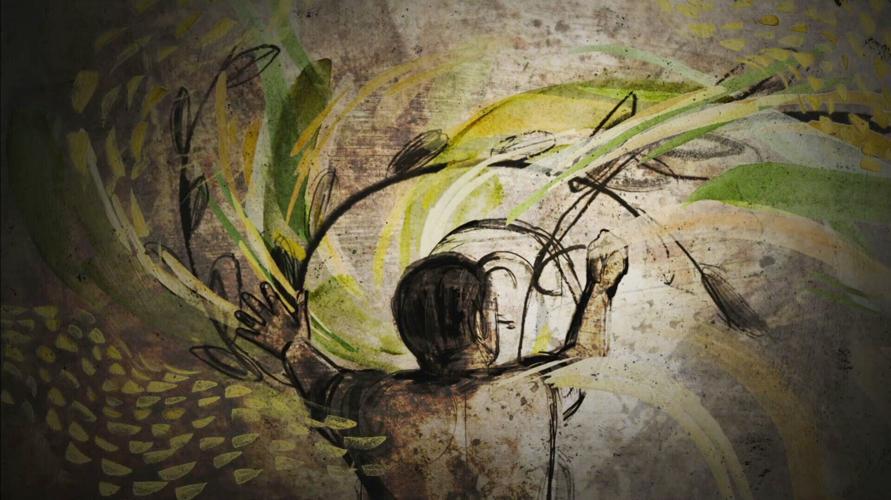 Portions of the story, such as Krimes' imprisonment, are depicted through expressive animation.

The details of “Apokaluptein:16389067” are too much to take in on a small screen — a mural comprising 70 bed sheet squares, with transferred imagery from newspapers overlaid in a collage of heaven, hell and purgatory.

That Jesse Krimes made it while serving a prison sentence, and mailed it out piece by piece, makes it sound like a novelistic invention, yet it’s a very real project dreamed up as a way to escape the reality he’d found himself in.

Krimes, who now works in advocacy for artists after they’re released, says that he’s not ashamed of having gone to prison — that he made mistakes, but people are nuanced and don’t fit within the simple narratives that society holds fast to.

Director Alysa Nahmias’ portrait film takes pains with the nuances. A shorthand description could make it sound like a cleanly arced inspirational story. While it is a testimony to the power of art and human talent under the worst circumstances, just as often Krimes and fellow artists are given time to critique the problems of the criminal justice system, from racial disparities in sentencing to treatment of people after release.

And it very deliberately takes its time. It was shot over the course of more than five years, from his release to a gallery opening in New York City, from the relief of freedom to the fragility of trying to build a new life.

Raised by a single mother who had him at age 16, Krimes grew up in an apartment above his grandfather’s machine shop. A creative type from an early age, he would build little theater sets out of cardboard. His father wasn’t around — instead his mother’s friend helped raise him and he assumed it was his dad. After developing a drug problem, his surrogate vanished from his life and it sent Krimes into misbehavior. After multiple run-ins, including the loss of a full-ride scholarship, he was sentenced to five years in prison under a questionably weighted amount of cocaine in his possession.

That points to a storytelling challenge — the most formative part of his story happened outside the potential view of any camera. To illustrate this, the filmmakers took welcome artistic license: Molly Schwartz created animation, with expressionistic washes of color and cut-out figures, to re-enact the grim claustrophobia of his confinement and the escape art provides. As he narrates, we see his arrival at a medium security prison populated with gang members of every affiliation; his early decision to isolate himself and teach himself to draw; and the unexpected revelation that others would seek out his skills in the formation of portraits.

Even before his trial and sentencing, Krimes was held in solitary confinement and began displaying a conceptualist bent with the urgency of an expressionist. He remembered the classic children’s art project, in which you use silly putty to lift the ink off newsprint and transfer the image. He crafted a knife from portions of a battery. He cut out mugshots of people accused of crimes in articles, and lifted the image onto the only “canvas” he had — tiny squares of soap. Since he didn’t have any way to mail these out of the facility, he would collect playing cards. He’d cut out the head of a king, queen or joker, stacked deep enough on others so that it was like a shelf. These became his “Purgatory” series.

Transferred to another prison, he meets fellow artists — Jared “O” Owens and Gilberto “Cano” Rivera — and embarks on his major piece, “Apokaluptein,” which depicts heaven, hell and purgatory on contraband prison bed sheets. The collage process relied on hair gel to transfer images from the New York Times — advertising, travel photos, natural disasters, war — one sheet at a time. His hand-drawn commentary includes ballerinas, their heads replaced with mugshots — society’s expectation of contortion and perfection.

When Krimes is finally released, he quickly encounters obstacles. He also needs to connect with the son who was born while he was away. While his art is well-received, he learns that artists are valued more in prison than outside. He wonders if people admire him as an artist, or as a prison artist.

The latter half also introduces artists like Russell Craig, who after his own release began working with a program, Mural Arts Philadelphia. The two ask pointed questions about how society treats people upon release, which Krimes says is a pool of talent going unused.

At one point, he says mailing the sheeted sections of the mural felt as though he were transporting his body outside the jail to the outside world. Footage of him hanging them on the wall for the first time quietly conveys his argument more than words can.

Go to bigskyfilmfest.org to buy tickets.

Missoula's standup comedy community at a loss without in-person audiences

Things to do: Intimate exhibition at Clay Studio, plus indie drama and musical