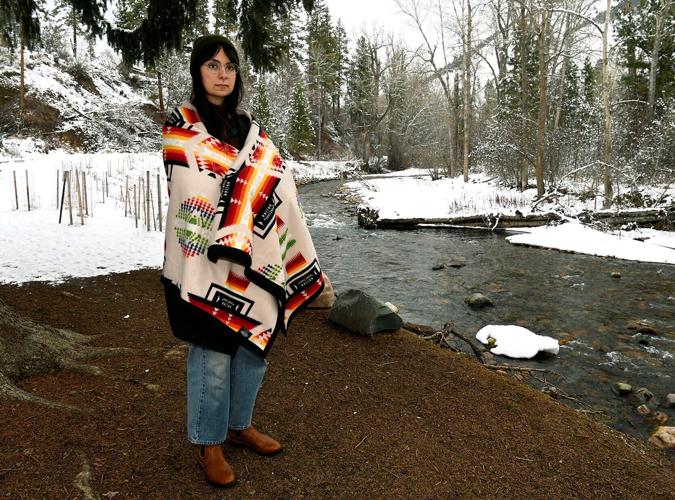 Kendra Mylnechuk Potter, subject and co-producer of the film "Daughter of a Lost Bird," stands in Missoula last week with a blanket given to her by members of the Lummi Nation when she reconnected with her tribal heritage. 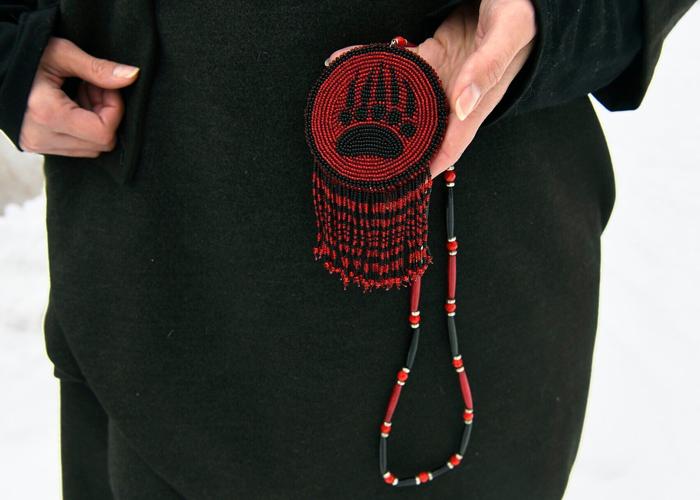 Potter was given beadwork by a family member of the Lummi Nation as she connected with her biological mother.

Kendra Mylnechuk Potter, subject and co-producer of the film "Daughter of a Lost Bird," stands in Missoula last week with a blanket given to her by members of the Lummi Nation when she reconnected with her tribal heritage.

Potter was given beadwork by a family member of the Lummi Nation as she connected with her biological mother.

In one scene of “Daughter of a Lost Bird,” Kendra Mylnechuk Potter leaves a voicemail — her first attempt at contact with the birth mother she’s never met.

Potter, who was put up for adoption and raised in Missoula by a white family, began the first steps toward outreach and embracing her Indigenous identity, a process filmed at close range over the course of seven years by director Brooke Pepion Swaney.

Potter, an actor who worked in New York before returning to Montana, said the search began when she was getting ready to become a mother herself. They decided to “document the journey, and I also decided to make the journey to start looking.”

“I didn’t have nearly as much reticence, really, about documenting it. I had reticence about doing it at all,” Potter said.

The film has its Montana premiere on Sunday at the Wilma at the 19th annual Big Sky Documentary Film Festival. It includes interviews with her birth mother and context on the U.S. government’s assimilationist policies toward Indigenous children, who were separated from their parents, language and culture through the boarding school systems and later the Indian Adoption Project.

Swaney said they wanted to keep it to Kendra’s perspective, but as the project developed more background became necessary. That history isn’t widely known, even to Potter and other Native adoptees, Swaney said. “It was clear that we had to do something to contextualize the story in that way.”

Potter was adopted by a Missoula couple, Sandy Henderson and Larry Mylnechuk, and had a happy childhood, as seen in old film clips and photographs. (They were game to participate in the film and speak on camera.)

While Potter knew she was adopted, she largely thought of herself as white and it wasn’t until she was older she began to ask questions about the heritage that she didn’t know how to claim.

Swaney, who is Blackfeet and Salish, grew up on and off her mother’s reservation, the Flathead, and in Helena and attended Stanford University and then film school at New York University. The two met and became friends in New York while working on indie movies together.

Potter starred in Swaney’s short film, “Ok Breathe Auralee,” which played at Sundance Film Festival in 2012. Her character is a woman who’s trying to get pregnant. The fictional backstory is that she’s Native, but was raised outside of her community by a white family, a coincidental parallel that they talked about.

After Potter became pregnant and moved back to Missoula, the idea of researching her family history grew, and the project began, not knowing where it would lead.

Sans extra crew, Swaney came along to Portland where Potter first meets her mother, April Newcomb, in person for the first time.

The camera was there as Potter meets her mother and engages in an hourslong conversation. No one typically sits down and asks their mother to share their entire life story, Potter said.

“We don’t do that. We did that for the film, and I benefited greatly from it,” she said.

“That was such a gift to have her be so, so open and willing,” she said.

Newcomb shares her own story — that she herself was put up for adoption and raised by a white family, part of the generation that were called “lost birds.”

Newcomb discusses how she struggled with substance abuse when she was younger. She describes abuse when she was a child, followed by years of living on the street and reaching rock bottom. After getting sober, she received a letter from her father, who introduced her to her tribe on the Lummi Reservation in Northwest Washington and began her effort to reconnect.

Potter hopes the experience “inspires someone else to ask their mother, whether they grew up with her or not: "What was your life like?”

Along with Potter's and Newcomb’s personal histories, the film gives background on the assimilationist U.S. policy toward Indigenous people. The Indian Adoption Project removed children from their families, treating them as “a pawn in the war to end tribes,” as Swaney says in the film.

She cuts in historical footage, including an Indian Affairs official surrounded by children who he says are “being rapidly brought from their state of comparative savagery and barbarism to one of civilization.”

Terry Cross, founder of the National Indian Child Welfare Association, explains that the policies have had devastating effects on Indigenous people — a disproportionately high rate of suicide and substance abuse and child neglect. “We’re in a recovery process,” he says.

According to NICWA’s site, “25%-35% of all Native children were being removed; of these 85% were placed outside of their families and communities — even when fit and willing relatives were available.”

In response, activists pushed for the Indian Child Welfare Act, passed in 1978, which prioritizes placing Native children within their communities. (That law is being challenged in a case, Brackeen v. Haaland, which could get taken up by the U.S. Supreme Court this term.)

At one point in the film, Swaney as narrator-director says she begins to feel uncomfortable about whether she as filmmaker-friend is pushing her subject along.

She always offered help as a friend, with or without cameras, and was curious about that part of her life, and knows “the act of filming is affecting reality.”

Making a film creates “moments in people’s lives that they don’t necessarily ever have the courage to do,” she said.

Potter said she couldn’t have done some things without the support, since they’d worked together in the past and she knew the quality and integrity of her work set boundaries. Potter is a co-producer but they agreed she wasn’t allowed in the editing room.

Swaney said she’s a great subject, since she “processes everything in dialogue” in thoughtful ways.

Potter, like her mother before her, travels to the Lummi Reservation and meets relatives and begins the process of enrollment, all of which you see on camera.

Swaney said there are protocols when reaching out toward a tribal community, and they did likewise through a local connection through filmmaking and made their intentions clear. They had funding through a grant from Vision Maker Media, a public media program and “we felt like it was important that the film be available for others to use,” Swaney said.

The pandemic has made screenings complicated. The world premiere was in late 2021 at Maoriland Film Festival in New Zealand, and it has since screened at more than 20 festivals. They’re also looking at screenings in tribal communities in the future, which has been complicated because of COVID.

“We want to have the film available for the Lummi communities specifically, but also any other communities, whether it's on the other side of the fence with foster care workers and agencies."

The film makes a point to say that it's an ongoing process, and Potter on camera discusses how connecting with her mother, and family on a reservation in another state, leads to more questions for her, some affected by the pandemic and the geographic distance.

“I feel I'm still an outsider,” Potter said. “You know, I don't have the relationships yet. I'm working on them, but they're not there yet — because I don't live there.”

“Daughter of a Lost Bird” is screening at the 19th Big Sky Documentary Film Festival.

Go to bigskyfilmfest.org for tickets or more information. Masks are required.

There will be a filmmaker Q&A after the screening with Maylinn Smith, a former UM law professor and expert on the Indian Child Welfare Act.

For information, go to daughterofalostbird.com.

Missoula's standup comedy community at a loss without in-person audiences

Things to do: Intimate exhibition at Clay Studio, plus indie drama and musical