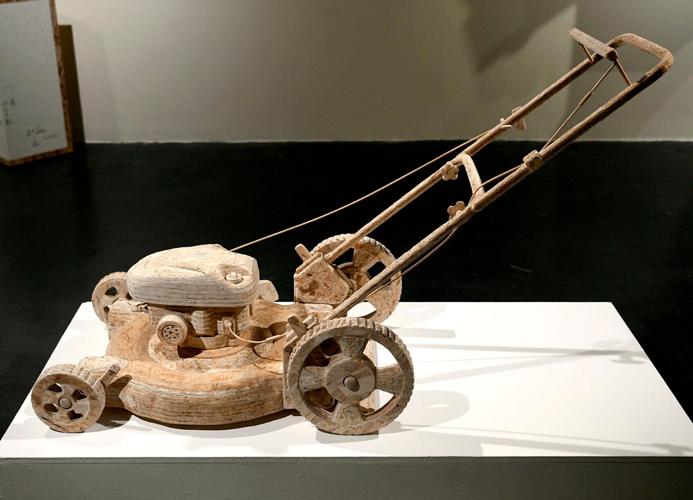 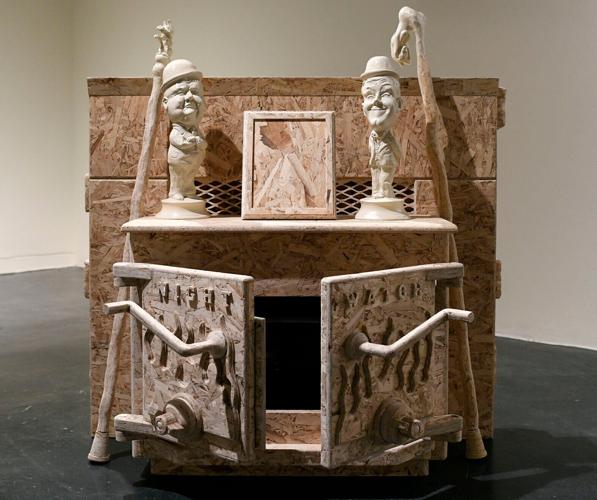 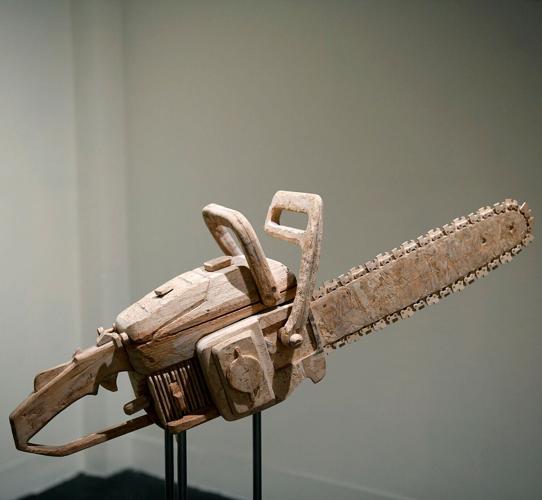 The art gallery is stocked like a garage: an electric hand drill, fly rods, waders hanging on the wall, cabinets, a lawnmower. On the periphery are photos and signs of family: a picture of the artist, James Zimpel, and his grandfather. Mementos of his first deer, an old armchair, albeit one that's suspended on the wall as part of a sculpture.

The tools are all wooden replicas of the real thing — detailed replicas of objects Zimpel found sitting out for free in Bozeman, where he lives and teaches. The other items are found-art assemblages related to family.

James Zimpel’s “Curb Finds and Awkward Collaborations” is on view at the University of Montana’s Gallery of Visual Arts in the Social Sciences Building through Thursday, Nov. 3. He’ll give a lecture on Nov. 3 from 5-6 p.m., with a closing reception afterward from 6-7.

“I don’t believe in making art that’s inaccessible in any way,” Zimpel said. He wants people to be able to admire it for the craft, or maybe it stirs up an emotional connection. He wants something that “people from different walks of life can appreciate.”

Zimpel’s “Curb Finds and Awkward Collaborations” is on view now in the Gallery of Visual Arts at the University of Montana. Zimpel is the associate dean of the College of Arts and Architecture at Montana State University, and an associate professor of sculpture and extended media.

He grew up in Minnesota and went to art school in Chicago and then New York City, and taught before his career brought him to Montana. He’s been teaching there since 2013, and this exhibition is a slice of 10 years’ worth of sculpture.

The “Curb Finds” and the “Awkward Collaborations” are two related series that he’s been working on.

His medium for “Curb Finds,” which he started about six years ago, is oriented strand board, similar to particle board. It’s an easy material to source (he has friends who work construction) and it’s cheap. He likes that it’s not a precious wood.

His process for choosing the objects is inspired by his grandfather, who, if he saw something like a lawnmower or a drill sitting out for free, would stop and pick it up and see if he could fix it, maybe re-sell it.

There’s always things set out like this around Bozeman, in typical college-town fashion. He studies the shape and models individual parts, and builds up his sculpture through a process of compositing and making parts. After the sculpture’s complete, he drops the original object back where he found it. He thinks it’s kind of a funny ritual.

“The chainsaw’s like a two-month project, and then it just reappears in front of their house,” he said.

The complexity has grown. A jigsaw, bound together with wooden dowels, has a looping cord that reminds Zimpel of a line drawing. A minute detail among others is a piece of “tape” on the cord that he constructed from a slice of dark poplar.

While the lawnmower on view here is seemingly the most complicated object yet, it’s not. He leveled up to a Craftsman riding model that’s bound for an exhibition in Brazil.

To him, sculpture has always been a “catch-all medium.” He dabbles in everything and encourages students to do the same. He’s constructed pieces that incorporated pool tables and basketball hoops. Unfortunately, they were too large to get inside the gallery doors here.

This is, however, the first showing of his work in Missoula. He was invited by Cathryn Mallory, a UM art professor and the gallery’s director, who thought his variety of media would be interesting to the community and students.

Zimpel's "command of materials and technical prowess are very impressive," Mallory said. "Not only does he know how to use tools, he has a reverence for them as objects of meaning. His exploration of familial bonds in the content of his work is expressed with sentiment and humor. After all, who doesn’t love the idea of a chainsaw carved from wood?"

The other half is “Awkward Collaborations,” which incorporate found objects with allusions to family and friends. Zimpel lays out his family tree in one piece. George Zimpel adopted Michael Zimpel, James’ father. James was primarily raised by his mother and grandmother, but starting in his teenage years got to know his grandfather and father more.

One of the collaborations hangs on the wall: A cabinet with a knife rack, topped by a vintage orange recliner. The bottom of the cabinet is a Lazy Susan that can hold baby-food jars as nail containers. George built it, and while it was under construction asked for baby-food jars from Michael, the baby-food naturally consumed by James. So it’s like their first “collaboration” together and is named in kind.

“Mantle” is a life-size reproduction of his grandparent’s mantle in particle board. On top are casts of Laurel and Hardy figurines that they kept, plus two walking sticks his father made. One was for his grandmother, and has a little dog on it. The other was for his grandfather, and has naked lady as a joke.

To him, they speak to some of the themes in his work overall: like the absurdity of masculinity, and function-dysfunction in relationships, and the “rules of engagement” in bonding.

The sticks are like a bonding object, where they act as “a safe place to land to have a conversation,” he said.

For one “found sculpture” piece, he tacked a pair his grandfather's waders to the wall, positioned like they’re occupied by an invisible fisherman, and marked his own height in pencil (5’9”).

Years ago, using a primitive hack on an Xbox Connect, he had his grandfather sit in an office chair where he sells his fixed-up tools on Craigslist, and then scanned his image in 3D and printed it with a CNC router. Zimpel said it’s a somewhat crude surface, but gives a sense of his grandfather — a tall, stoic Midwesterner, in the gallery.

There’s an element of voyeurism to the piece: There are no labels or wall text. Instead, there’s a map at the entrance, near a bronze statue of Zimpel, naked except for a baseball cap. He thought it would be a funny way to signal that there’s vulnerable, personal material in the gallery.

One piece, “The Thing Comes of Itself,” is constructed from fly-rod components, rising straight up from a custom stand. One blank takes a 45-degree turn to join the other. A smaller third one juts out and runs parallel. It's an object, one that you could talk about. And it's also, to Zimpel, "an abstract way to think about a timeline or connection to certain people in my life."