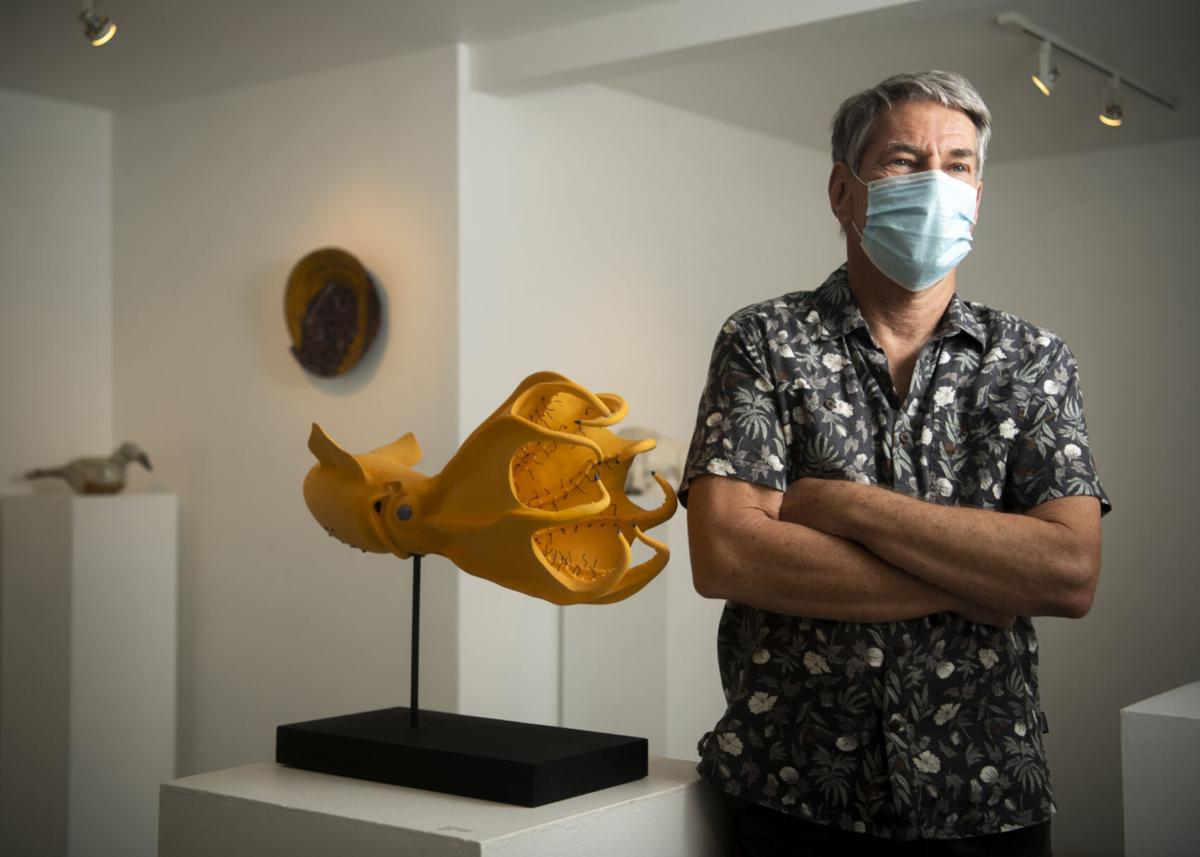 Jon Bonnicksen stands next to his ceramic sculpture, "Vampire Squid," at the Clay Studio of Missoula on Tuesday. 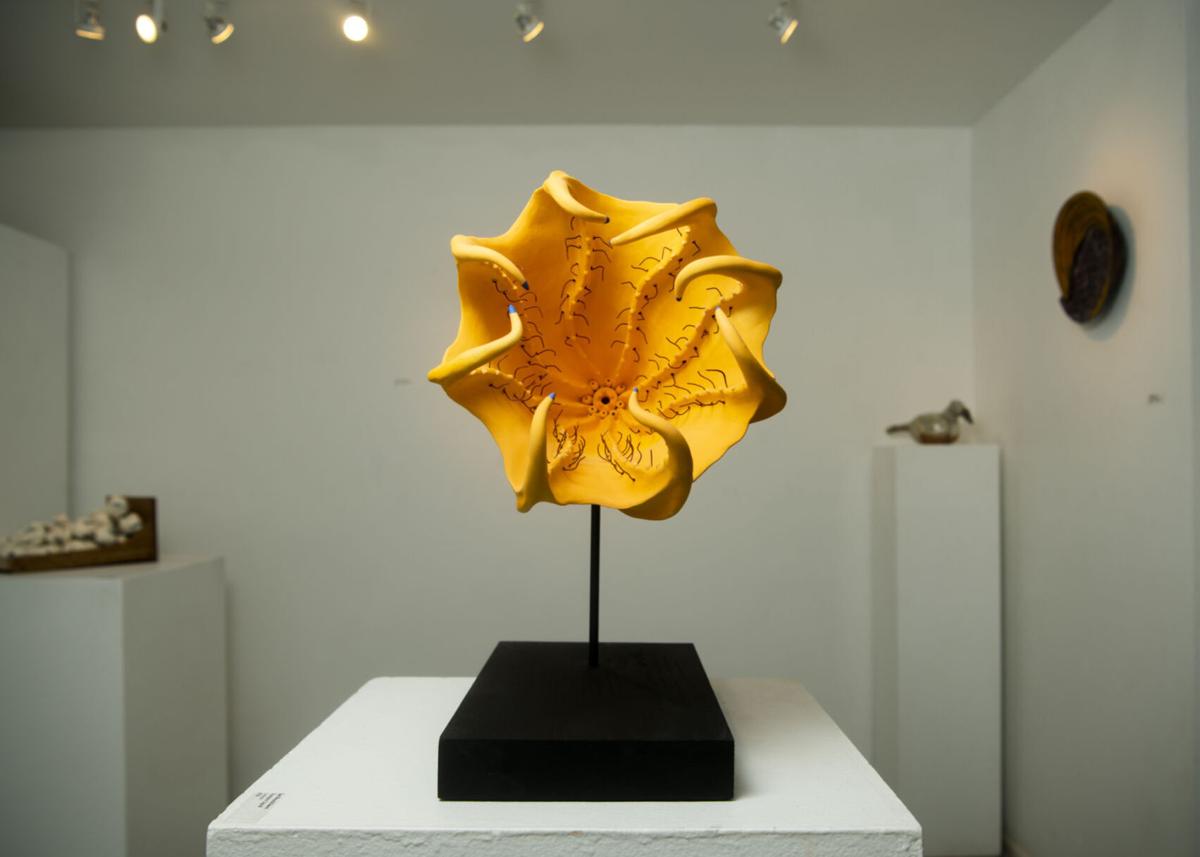 "Vampire Squid" by Jon Bonnicksen at Clay Studio of Missoula's exhibition, "Where the Wild Things Are." 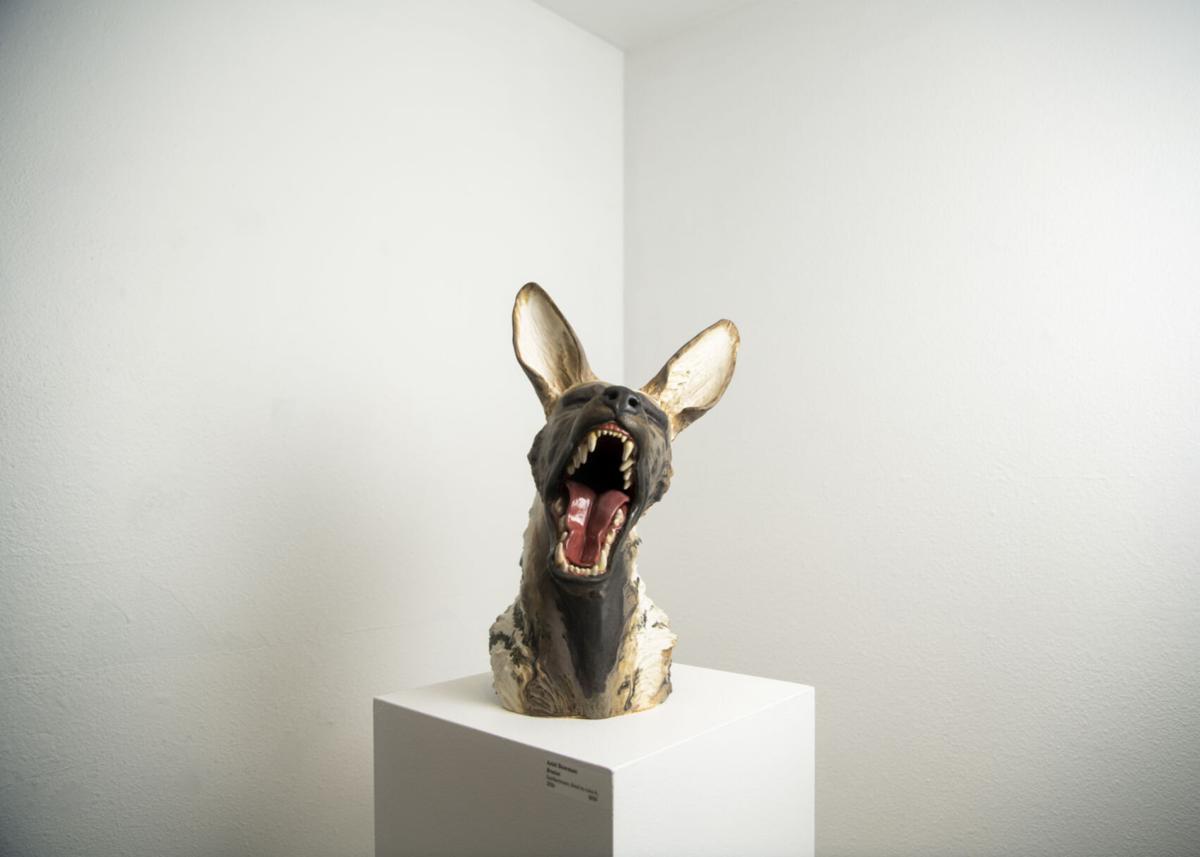 "Brutus" by Ariel Bowman at the Clay Studio of Missoula.

Jon Bonnicksen stands next to his ceramic sculpture, "Vampire Squid," at the Clay Studio of Missoula on Tuesday.

"Vampire Squid" by Jon Bonnicksen at Clay Studio of Missoula's exhibition, "Where the Wild Things Are."

"Brutus" by Ariel Bowman at the Clay Studio of Missoula.

Creatures real and unreal are in captivity in the Clay Studio of Missoula’s gallery — a bison, a vampire squid, a gryphon, cats, a manta ray and more.

The exhibition “Where the Wild Things Are” displays the breadth of sculptural possibilities of ceramics for anyone who associates it more closely with cups and bowls.

“Where the Wild Things Are” is on view at the Clay Studio of Missoula through Sept. 25. Hours are 12-5 p.m. Monday-Friday and Saturdays from 12-3 p.m.

Ariel Bowman’s “Brutus” is a startlingly lifelike bust of a striped hyena fiercely barking — its mouth open wide to reveal sparkling white teeth and a seemingly wet tongue. Its nostrils are flared, eyes shut tight, and ears at alarm.

Pennsylvania artist Judy DeSimone’s “Twists” could be some sort of microscopic lifeform — a textured pill-body shape with colorful appendages jutting out. Two pieces by Skylor Swann of North Carolina, in a series called “Apex Predators,” appear to be imaginary undersea creatures with unexpected bulbous shapes, leaf-like limbs and toothy mouths.

The studio invited guest juror David Scott Smith, who teaches ceramics at Salisbury University in Maryland. Prior to that, he was an instructor at Flathead Valley Community College for five years.

He selected 18 artists from around the United States whose creations include the fantastical, the local (a finely textured stoneware bison by Karen Van Galder of Montana) and the conceptual (Marina Kuchinski made a “drawer” of porcelain chicken wings, each printed with feathers, accompanied by a poem).

Smith alludes to the range and the oddity in his juror statement:

“Among the entries that were selected there is an exciting range of representational sculpture, fantasy, surrealism, and a few works I would be challenged to correctly classify. I find it very interesting that a ceramic artist would engage in a process of creating a work — going through the steps of careful construction, firing, and then glaze firing — to end with a piece that hopefully appears to be untouched by the human hand, or alien, or even dangerous.”

Among the “alien” or likely untouched creatures is a bright orange vampire squid crafted by Jon Bonnicksen of Missoula. He grew up in a creatively fruitful household — both of his parents were artists who worked in the animation industry.

Bonnicksen began working with clay long ago, but only about five years ago “took off” with it. Much of his work comprises sculptures of animal busts, such as giraffes or bunnies with long ears, sometimes in psychologically weighted manner, such as rabbits with cheetah fur. (His father, a veteran animator with large outfits like Warner Bros., often drew Bugs Bunny, and worked on "Fritz the Cat.")

The possibilities of what you can learn to do with clay are endless, he said.

“Not just with the medium and in the art itself, but within yourself,” said Bonnicksen, who was a psychotherapist for 15 years. There’s an emotional component and it “reveals yourself,” and “puts you on stage in a totally different way.”

He diverted into sealife for this piece after taking a class with studio resident Sara Catapano, who sculpts imaginary and vividly detailed creatures.

Prompted to make something “weird,” he chose the vampire squid, which had new technical challenges, such as a two-color airbrushed glaze. It also required the construction of eight arms that are curling inward, which he wanted since it added a sense of movement. The interior of its mouth is lined with more than 100 cirri — spiny objects that Bonnicksen made out of wire.

While he initially thought it would be a learning piece, he submitted it when he heard about the “Wild Things” show.

Bonnicksen, who rents space to work at the Clay Studio, said the pieces can be a vehicle to explore the ideas of persona. What’s more, it’s in a group setting, where people are open about their artistic process. He said they talk about struggles with how a piece is progressing and how it looks. “Is it good enough? That comes back to our own self-worth sometimes, and it’s also really vulnerable in a way for some pieces because they become real personal,” he said.

Finding a communal space for creativity has been rewarding for him.

“It brought me back to them, to circle around to my interaction with my parents and my parents’ friends,” he said.