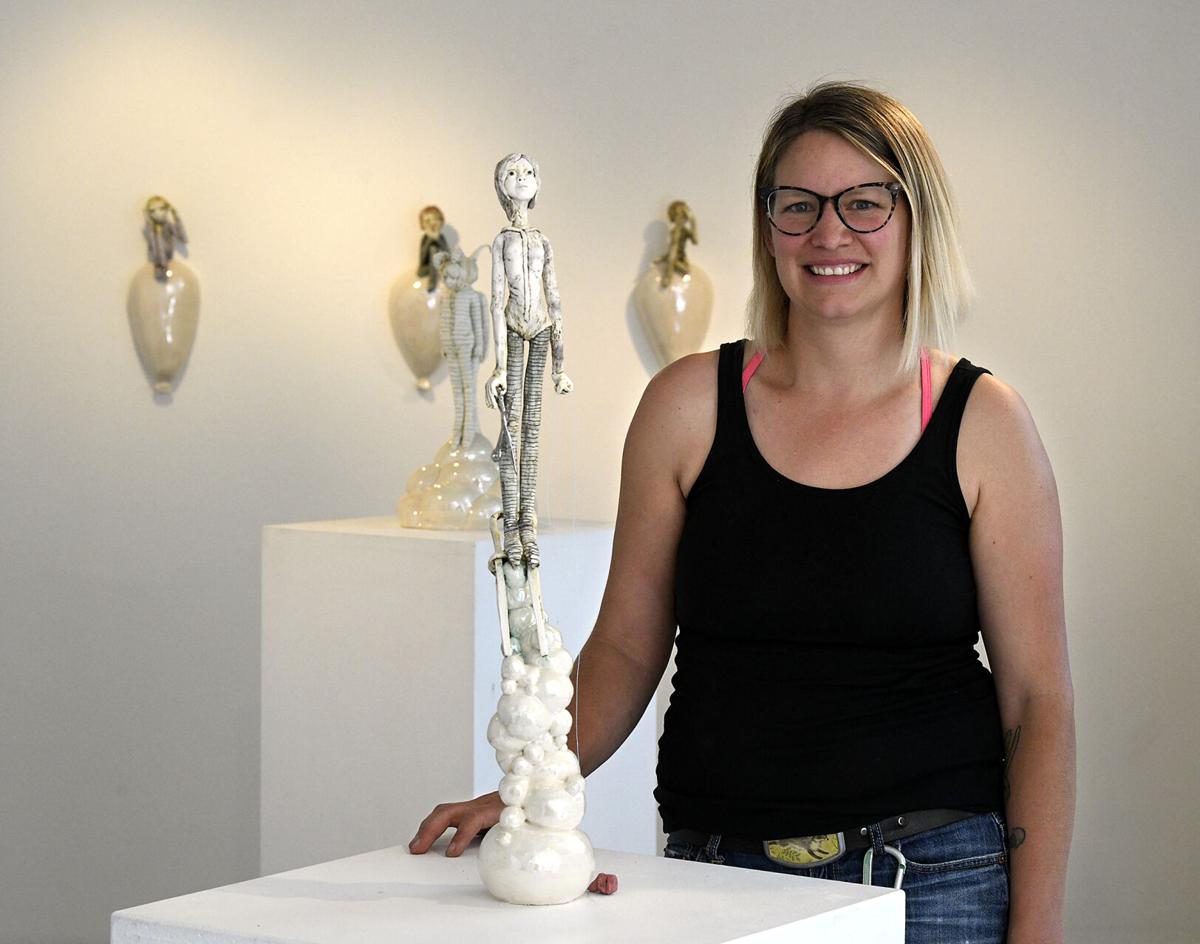 Sculptor Elisha Harteis is holding a solo exhibition to cap off her two-year residency at the Clay Studio of Missoula. "Running With Scissors" features a new vein of work for Harteis, with smaller-scale pieces that call for deep introspection into our own vulnerabilities and tolerance levels. 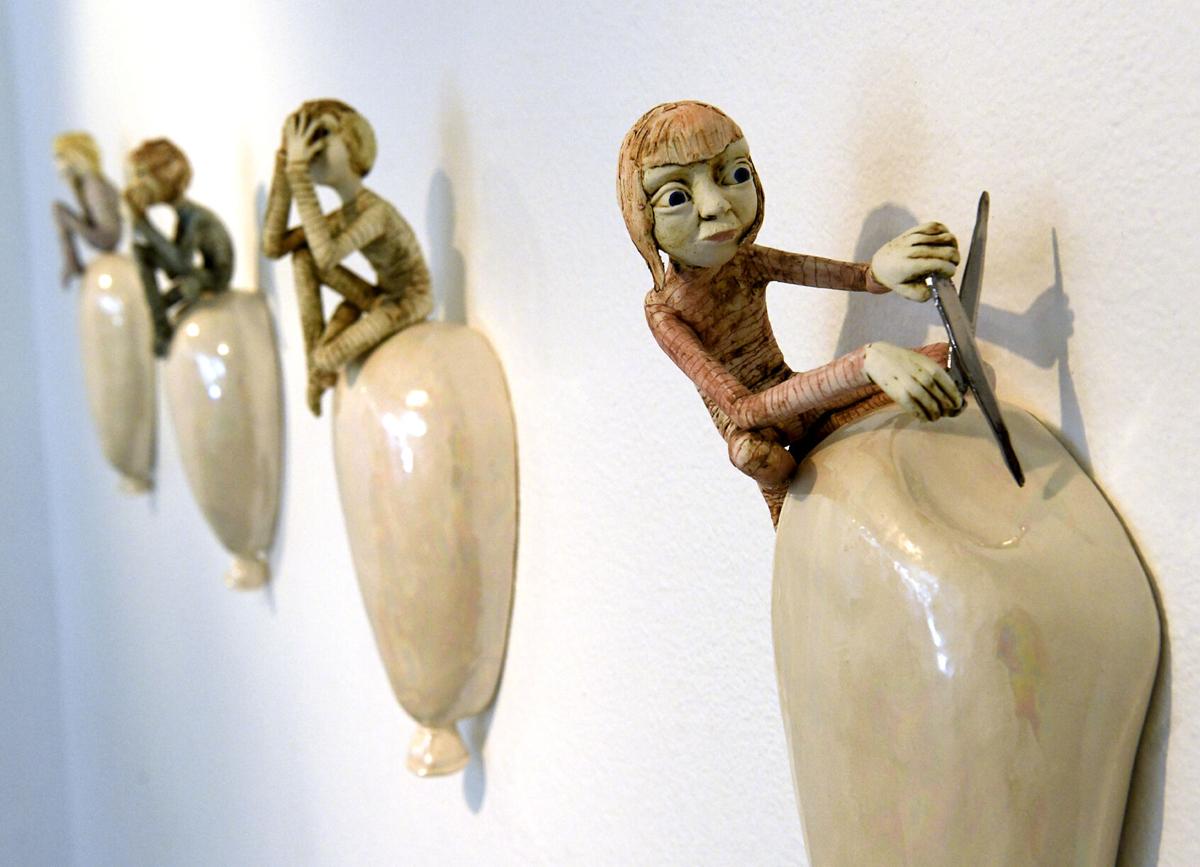 One of Harteis' hung pieces emulates the “three wise monkeys,” with four female figures, each floating along on their own balloon, depicting “see no evil, hear no evil, speak no evil.” The fourth figure at the end is holding scissors, preparing to pop her own balloon. Harteis said that figure decided to just say, “screw it.” 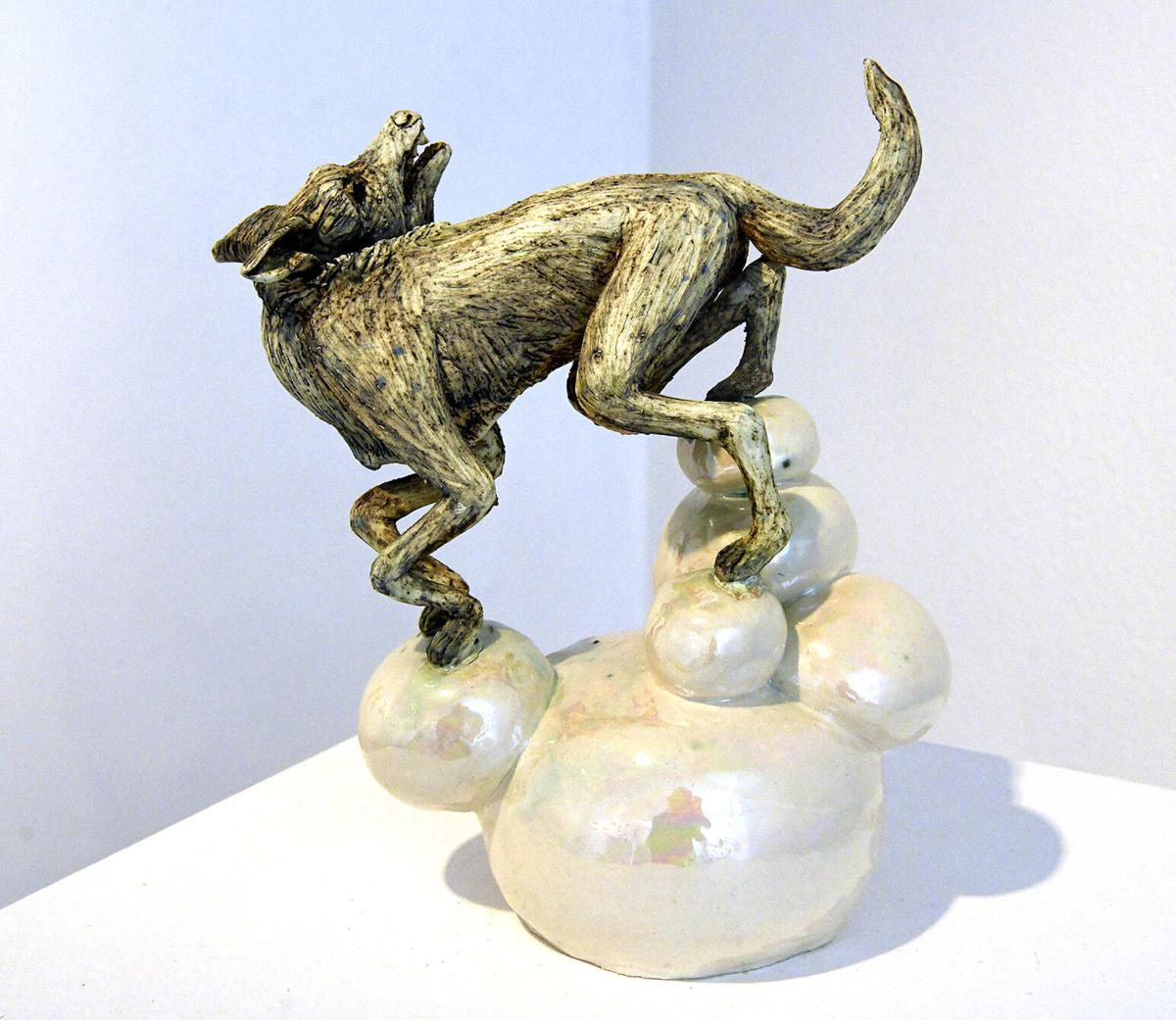 Harteis' uses different textures in her sculptures, with the figures having mostly rough, dreary surfaces juxtaposed with the smooth, glossy look of the bubbles they're placed with. 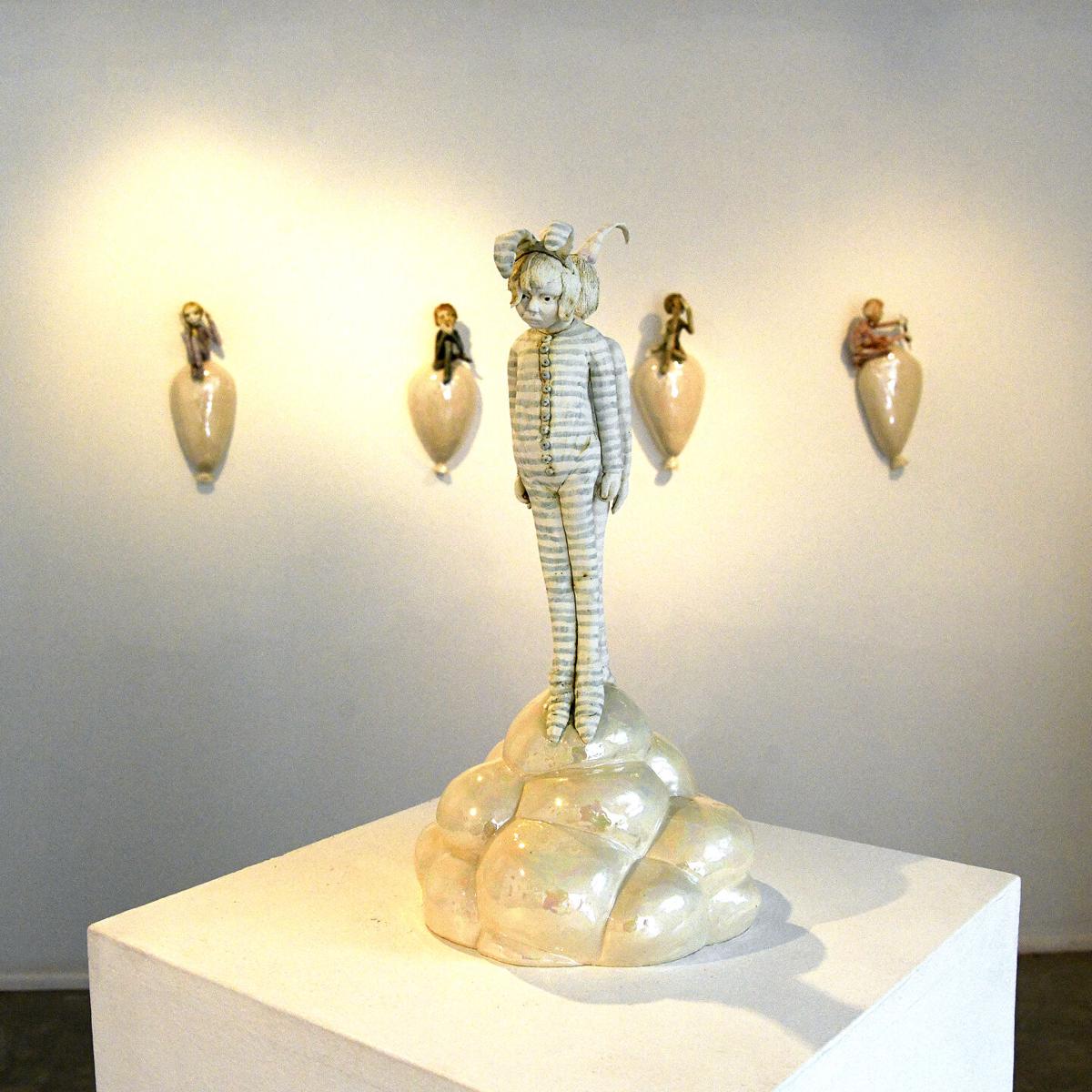 “Running With Scissors,” with works by Elisha Harteis, is on display through Aug. 28 at Clay Studio of Missoula with a socially distanced opening reception set for First Friday. The exhibition features figures paused in a moment, reflecting on “What happens if?” 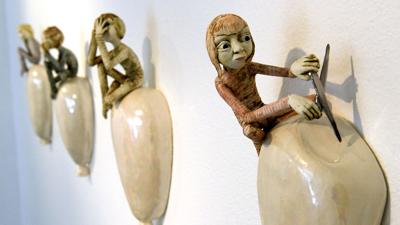 In a solo exhibition capping off her two-year residency, Clay Studio of Missoula artist Elisha Harteis is showing a new vein of work, with smaller-scale sculptures meant for deep introspection into our own personal levels of vulnerability and tolerance.

“Running With Scissors,” on display through Aug. 28 with a socially distanced opening reception set for First Friday, features figures paused in a moment, reflecting on “What happens if?”

“Running with scissors is such a dangerous thing. We’re always taught that, but I was thinking more about the moments when … we just can’t take it anymore, and you’re cutting this last string that you’re hanging from and just seeing what happens when you do that,” Harteis said in a recent interview at the Clay Studio.

Her centerpiece sculpture and the namesake for the show depicts a tall, thin young woman balancing on a teetering chair atop a tower of bubbles. With a pained, but hopeful expression, she’s holding a blue string in one hand and a pair of metallic scissors in the other, which appear throughout the show. Harteis said she used a white gold glaze for the scissors to make them stand out and represent a trophy or symbol of power.

A set of four sculptures hung on the wall emulates the “three wise monkeys,” with four female figures, each floating along on their own balloon, depicting “see no evil, hear no evil, speak no evil.” The fourth figure at the end is holding scissors, preparing to pop her own balloon. Harteis said that figure decided to just say, “Screw it.”

“These women, they’re at the end of their rope,” she said, adding there’s a sense of teetering between action and inaction in the work.

The figures are often childlike, donning striped stockings and bunny suits like the pink one Ralphie’s mom forces him to wear in “A Christmas Story.” Throughout her career, Harteis has focused on addressing the social issues around child abuse.

“I grew up in a pretty hard home, and I ended up going into foster care group home situations and it was definitely the best thing that could have happened to me,” she said. “It helped that I got in those programs and the people that I met changed my life.”

Looking for her own way to help others, Harteis began addressing her past through her art.

“The work’s really vulnerable and scary and out there, but it’s so important for people to not feel so alone and isolated in the pain that they’ve experienced in life.”

Juxtaposing the innocence of children with the brutality of abuse, her work can be somewhat uncomfortable to soak in, as it feels whimsical and light, but upon closer inspection evokes sadness, loss, pain and loneliness.

The pieces pair despair with what Harteis called “sweet moments,” like bubbles and ice cream cones. The quality of the surfaces and glazes used reflect that juxtaposition, with the figures having a more dreary, dull and rough texture next to glossy, almost pearl-toned bubbles.

But the work is supposed to be uplifting, she said, because the figures are acknowledging their vulnerability and letting it exist rather than fighting against it.

Her work has evolved, both in technique and subject matter, since she started the residency two years ago, said Shalene Valenzuela, the Clay Studio’s executive director, adding part of that might be influenced by the nonprofit’s adult programming. While Harteis has worked a lot in youth education in the past, she was able to teach adults for the first time through her residency.

“I saw her work grow and change, and I think she was forced to explain things in different ways,” Valenzuela said. “Through the process of teaching and sharing knowledge with adults, she was able to self-reflect and bring that into her own work.”

“The arts community and people who support arts and artists here are valuing having that space and being able to see work,” she said. “Everybody came wearing masks because they knew they were going to be interacting with people. Everybody was really great about it and really respectful.”

Prior to the pandemic, Harteis was set to teach 12 classes this summer. As things progressed, she made the difficult decision to cancel her offerings through the Clay Studio.

“That’s like the majority of my income and it also brings me happiness — being connected to people and coming together and helping to get to an end goal with making something that brings them joy even if it is a sad piece,” she said.

Although they’ve been scaled down, Valenzuela said being able to hold the exhibitions provides an opportunity for the artists to sell their work in a time when they need the income the most.

“The past two shows, people have come out to support and bought a lot of work.”

The Clay Studio of Missoula plans to host a First Friday opening for resident artist Elisha Harteis' exhibition "Running With Scissors" from 6 to 9 p.m. in the parking lot and outdoor garden area.

Social distancing will be observed and masks are required inside and when social distancing is not possible. Attendees will be able to view and purchase the art. For more information, visit theclaystudioofmissoula.org.