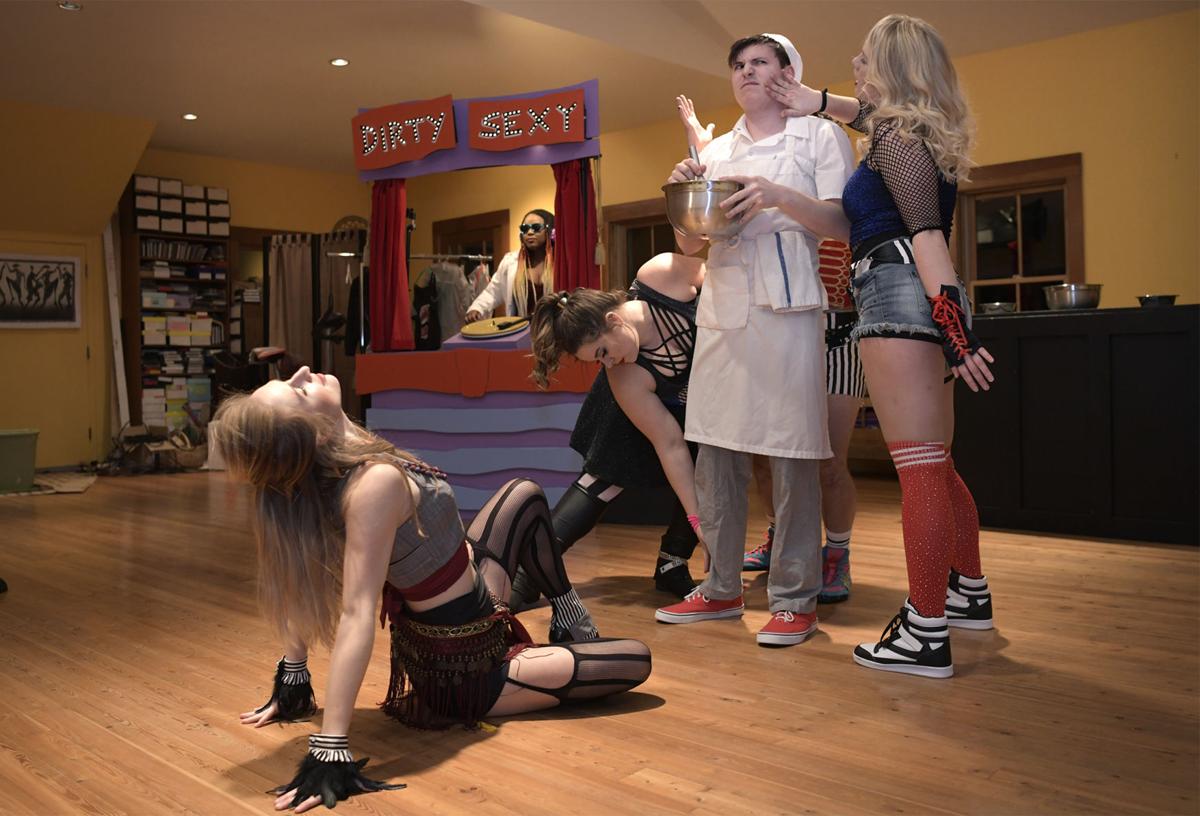 Members of "The Dirty Sexy Chocolate Show" rehearse on Tuesday for a 10-city tour. The original show combines theater, dance and original music, and ends with the audience eating a chocolate dessert. 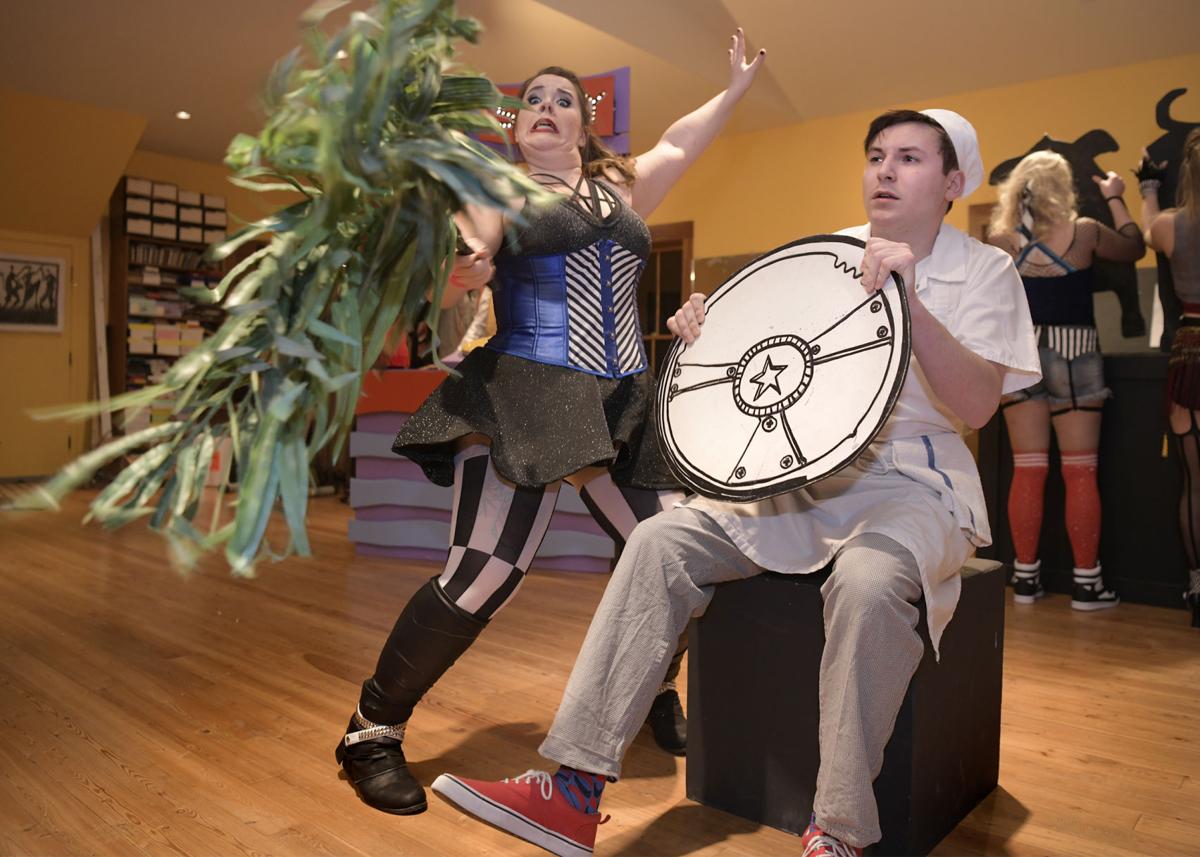 "I was working in pastry kitchens and theaters by night, and I'd been doing that for decades, and I realized that I wanted to combine the two halves of my life," Sher said. Several cast members are returning, including Kirsten Paisley, left, and Sean Kirkpatrick, right.

Members of "The Dirty Sexy Chocolate Show" rehearse on Tuesday for a 10-city tour. The original show combines theater, dance and original music, and ends with the audience eating a chocolate dessert.

"I was working in pastry kitchens and theaters by night, and I'd been doing that for decades, and I realized that I wanted to combine the two halves of my life," Sher said. Several cast members are returning, including Kirsten Paisley, left, and Sean Kirkpatrick, right.

"The Dirty Sexy Chocolate Show," a "silly romp" that combines theater, dance, and original music that ends with the audience eating a chocolate dessert, combines two of its creator's passions.

Jeremy Sher knows pastries and theater, and pursued both in larger cities like Seattle and Chicago before moving to Missoula.

"I was working in pastry kitchens and theaters by night, and I'd been doing that for decades, and I realized that I wanted to combine the two halves of my life," he said.

It was here, where he worked at places like Posh Chocolat, the Pearl Cafe, and the Montana Repertory Theatre, that he found the right elements and time to finally write and produce the show, which is exactly what it promises.

"It's really sexy, and you get a ton of chocolate, including a fancy chocolate dessert, made in town by Bravo Catering," he said. (During the show, audience members will get treats by Posh Chocolat.)

Now in its fourth year, Sher and company are taking it out of the road for a 10-city tour, including stops in Washington and Oregon.

For the fourth-annual production, they've moved from their original home base of the Top Hat to a one-night stand at The Wilma, with early and late shows. The balcony will be closed off, and the floor will have tables (sold out!) and rows of reserved seating.

"At its heart, it's the same show, but from the inside, there's a lot of new stuff," Sher said. Think junkyard-chic costumes, new music and new characters.

The plot follows a fresh-on-the-line sous chef, named Chef Preppy Pants (Sean Kirkpatrick), who must try to impress his boss (Reid Reimers) in a cooking-show format, ultimately trying his hand at a chocolate dessert. (Some of the absurdities along the way involve "wrapping someone in plastic wrap and shooting them with chocolate.")

Kirkpatrick is returning for his third year as Preppy Pants, who doesn't have a single line of dialogue.

"It's a real fun challenge, but it's different 'cause there's not even little vocalizations or that type of thing. It's all body and face work," said Kirkpatrick. He's written and produced his own comedic theatrical shows and staged them at the Downtown Dance Collective.

He said he and Sher come up with a new angle on his silent character each year, although he aims more for "Mr. Bean" than cartoon-ish silent-movie stereotypes. With the creative leeway he's given, he said "there is not another show like it."

The dessert? A sachertorte, since "the story is the dessert," Sher said. (And who ever complained about eating a chocolate dessert?

The new parts? "At least a dozen" new pieces of music. Sher wrote the lyrics and composer Mike Elson of Portland, Oregon, wrote the tunes.

Some of Sher's suggested vibes included classic soul like Curtis Mayfield's "Superfly" and Isaac Hayes' "Do Your Thing," while others are built from, say, a house bass line.

Local pianist Josh Farmer performed and recorded the tracks, which will be used to back the live show.

The lack of a live band spurred the creation of a new character, a DJ and vocalist, who will be portrayed by Kateena Bell, a Missoula singer with a great voice. She performed in the rock band Rooster Sauce and in "The Rocky Horror Show Live!"

A new piece of the set, a DJ booth, was built and designed by local artist Jack Metcalf, who provided the full original set of props still in use from the first year. Sher called it a "campy DIY aesthetic."

The show is one of the few local theatrical productions that goes out on tour. All the writing, casting and rehearsal was so much work (and so fun) that it "felt like a shame to run it for one, maybe two weekends," Sher said.

"The impetus was just wanting to perform it more and we just needed a larger audience," he said.

They took it to Whitefish and Seattle in the past and the response was strong enough to "go for broke" this year.

Sher's novel combination of food and theater won a statewide Artist Innovation Award from the Montana Arts Council in 2015.

He confesses that he didn't have any interest in baking when he was a kid. It wasn't until he was hunting for jobs in Seattle, thinking that he'd end up waiting tables, that he found his path.

"This guy at this fancy dessert cafe that was owned by a chocolatier was desperate and said, 'I will hire you right now if you come in the back and work with me,'" Sher said.

After two shifts of making nothing but sponge cake, Sher worked his way up through tortes, brownies, cookies, mousse and brules, he "got the bug." After three years of working professionally, he went back to school got a degree in pasty and specialty baking at South Seattle College.

He's moved around a lot, including stints in New York and Paris, plus seven years in Chicago — working in both of his trades.

"One didn't necessarily enable the other," he said. On the kitchen front, he would help open restaurants and bakeries, building the kitchen, hiring staff and run them, while working theater gigs as well.

"Then every once in awhile, I would get a really great show with a six-month contract, and I would quit whatever pastry job I was in because this was a great gig," he said.

"Dirty Sexy Chocolate Show" is his fourth original production, and his second that he brought on tour.

"Saltwater," a magical realist show, was developed at an artists' residency in Dillon in 2004-05.

"We hunkered down in Dillon for six weeks and did physical training for two hours a day and rehearsed for six more hours every day and built this show," he said. They toured to Seattle, then Vancouver and Victoria, British Columbia, and then to St. Louis.

"Crow" was a solo performance based on the life of Donald Crowhurst, an Englishman who died tried to sailing around the world by himself, eventually going mad and killing himself.

Sher created "an exploration of his story" by arranging 36 rigging points of rope around the stage, on which he would move around as the plot progresses. The ropes had clean lines that by show's end were "a tangled mess that sort of mirrored his emotional journey," Sher said. While he was the only person on stage, he worked with professional rope-riggers and theater designers for lighting and projections.

"The Dirty Sexy Chocolate Show," meanwhile, is simpler in its tone and message.

"This is a really silly, fun romp of a show," he said.

"The Dirty Sexy Chocolate Show" is on a 10-city tour this year. The Missoula performance is at the Wilma at 6 p.m. Saturday, Feb. 9.

Tickets are $25-$35 with VIP options ($98-$180). To purchase tickets, go to dirtysexychocolateshow.com or Logjampresents.com.

The other Montana stops: