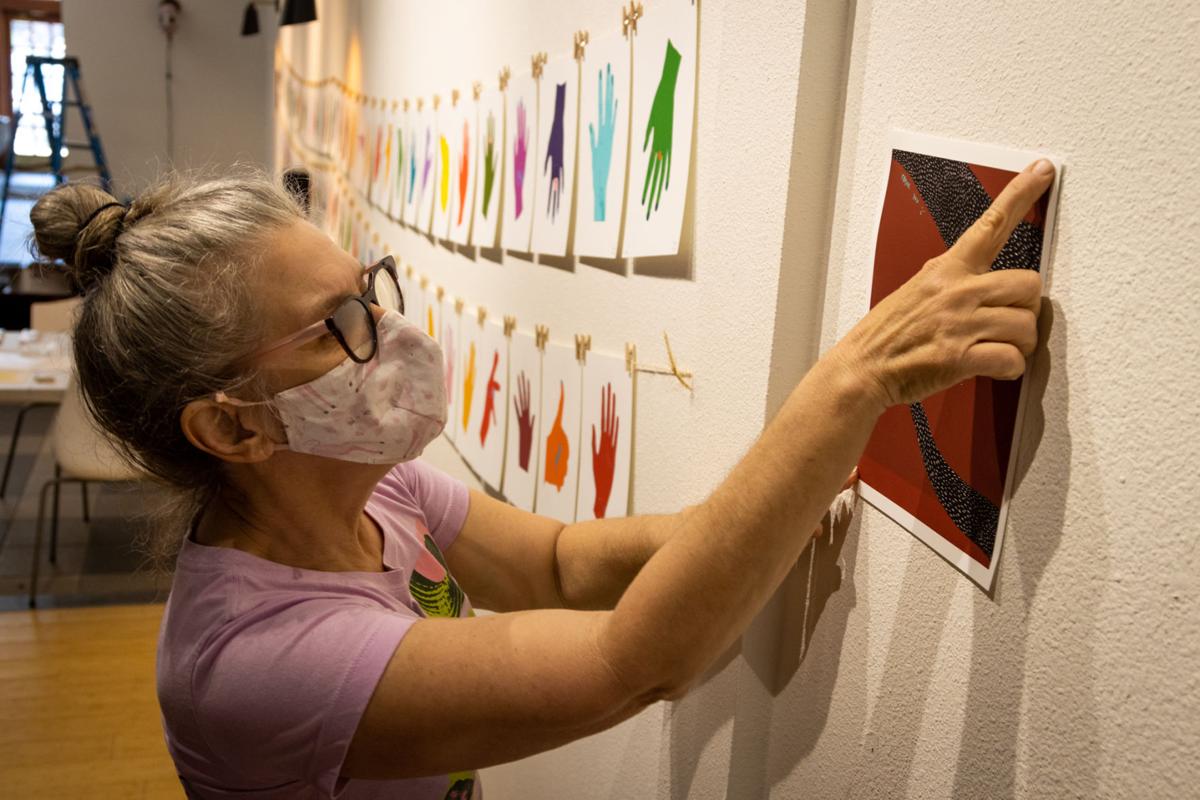 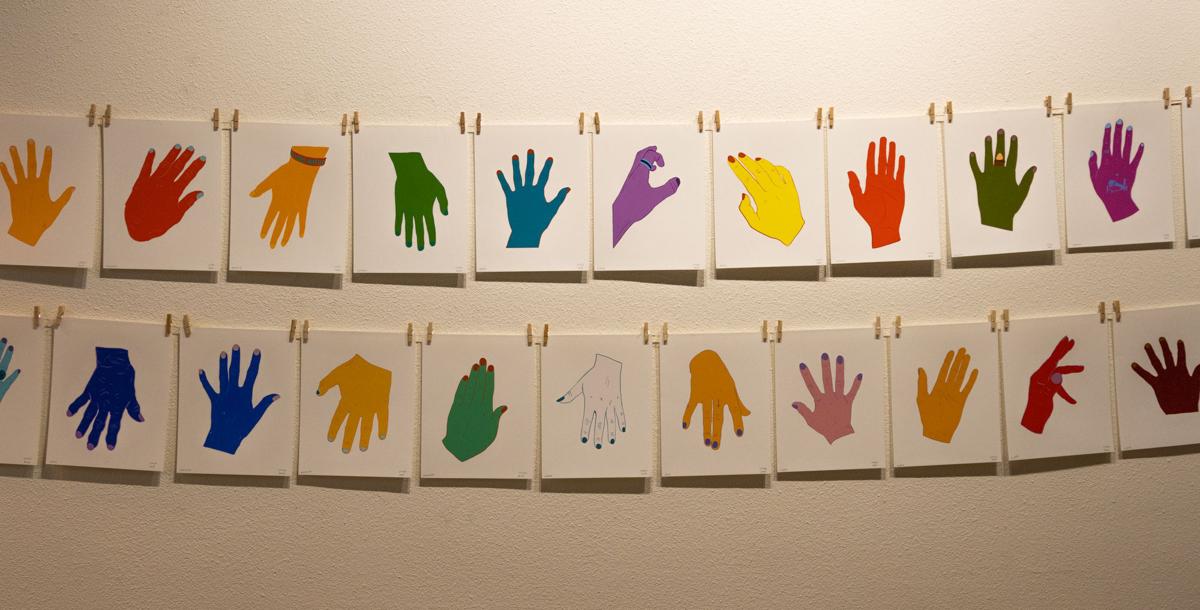 A “Feeling Welcome” project at the Zootown Arts Community Center invited four artists to paint a mural in downtown Missoula, with the idea that it should reflect that theme and draw on the experiences of underrepresented people in town.

Last month, Cristina Marian, a Romanian artist who lives in Bozeman, was painting her portion on the alley wall off Ryman Street. People asked her questions about specific images, inspired by the experiences of Missoula refugees. Then a young man stopped by as she was painting the outline of Eritrea as a cloud.

She didn’t know he worked around the corner; he didn’t know she was there painting a mural. Another refugee saw her working and came back with cookies the next day. She said it was so nice to “experience that at the same time."

The project has two parts — the mural alley and a gallery show in the ZACC. The artists are Marian, Willow Kipp of Heartbutte, who’s studying at the Native American Institute of Art, and Stella Nall and April Werle of Missoula, both University of Montana BFA graduates.

The mural is located behind the ZACC, in the alley between Red’s and Bodega’s — the owner of the building at 201 W. Broadway gave “enthusiastic” permission to move ahead with the project, and it was paid for with a National Endowment for the Arts grant.

Three artists completed their sections of the mural by last fall, while Marian got delayed by weather and other complications related to COVID and returned recently to complete her portion.

The pieces in the gallery show are a chance to see the artists’ work in a different context.

Werle, a Filipino-American artist in Missoula, produced mixed-media pieces on woodblock for the gallery show, with recurring visual motifs — hands in expressive gestures, in settings that reflect her Asian heritage and Montana surroundings. They’re a way to represent these “in-between spaces,” she said, “like reading a book with characters that feel like you.”

Werle said her hands are “the most physically identifying feature that I’ve inherited from my mother, who’s Filipino, and I create with them as a subject.”

The pieces also incorporate patterns from Batok — traditional Filipino tattoos that tell stories — as a way of respecting the Filipino diaspora. Werle recorded interviews with biracial Montanans for her pieces, which are posted on the ZACC YouTube channel, about impostor syndrome, “being fluid,” and “moving through white spaces.”

For Werle, the mural was a “jumping-off point for self-reflection and delving into my culture, and examining decisions in my community that made me feel like a sense of impostor syndrome,” she said. That included “a common identity conflict about whether or not we were included in BIPOC.”

Nall's imagery of animals is visible in this mural, and the one underway at the downtown transfer station. In the gallery, you can see two-headed bison, purple rabbits and mammals that often have unusual numbers of feet, with repeated, minute marks for their fur.

For her mural outreach, Nall asked community members to send her pictures of their hands and include their favorite color and a few words about themselves. They went onto the mural itself, now, and in the gallery, she’s showing them all and including their stories. The mural itself has images of a bird-shaped hand, a reference to her Crow heritage.

Marian is from Romania and came to the U.S. in 2013 and completed her Master of Fine Arts degree from Montana State University last spring. She was already creating personal work based in her own experiences an an immigrant — transitional life experiences and existing in liminal spaces.

For the mural, she reached out to Soft Landing Missoula and conducted interviews with Missoula refugees from  Congo, Eritrea and Iraq. (All three countries are depicted in silhouette clouds.) All of the imagery was designed based on those interviews — for instance, you’ll see a house turned upside down, topped by shelves that contain objects like vases and symbols. A set of luggage is set atop a pair of legs, a reference to adaptation. The section of the wall she’s painted on has a raised door, which she covered with a cascading set of entryways, creating a sense of passage, and the silhouette of a traveler with a backpack and suitcase.

Many of the refugees she interviewed brought up the subject of traditional food, its importance and perhaps not having as easy access to it here. Tucked into a section of the wall with a few missing brick layers is a recipe for kubba mosul, an Iraqi meat pie.

The imagery on the mural is meant to communicate directly or inspire some Google research. In the gallery, she’s sharing a new body of paintings that share themes but are more abstract and reflect the emotion of the content — the “transitional life experience,” moving “in between counties, in between languages, in between cultures.” Among the marks and textures, figures and structures emerge and fade. It’s a “play between representational and abstraction, unfixed elements and some very clear elements, some confusion and wonder,” she said. So it’s “exactly how it feels to be in this kind of liminal climate.”

While that’s rooted in her experiences, she said it felt more universal recently because of the uncertainty of the pandemic and job migration — more people including those who stopped by while she was working, relate to the feeling of confusion and transition.

Coming into a new environment, you have to “redefine everything you were before, it’s like a renegotiation.”

The Zootown Arts Community Center is holding an opening for the “Feeling Welcome Mural Alley” from 5-8 p.m. on First Friday, June 4. Some of the artists will talk about their work and the project at 6 p.m. Inside the ZACC, you can see work from the artists. The show will be on view through June.

Arts in Missoula: Rep reading of a new play, MCT and aerial drama