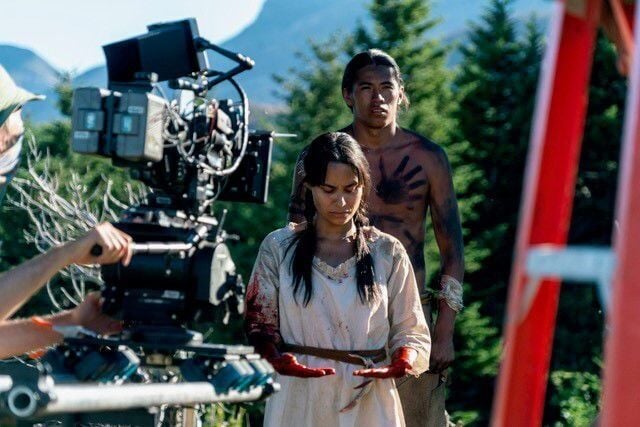 Stormee Kipp in a scene from "Sooyii," which was shot on the Blackfeet reservation with dialogue in the Blackfoot language. 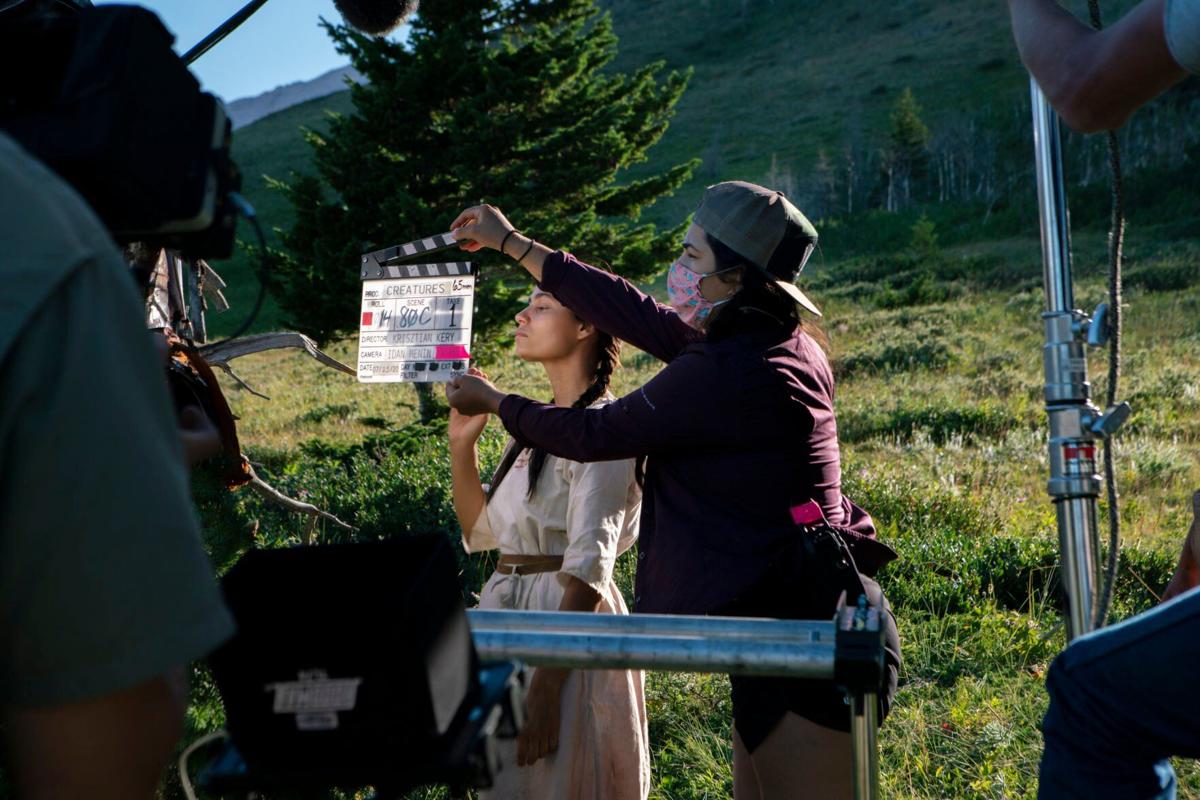 The movie was shot on the reservation.

Stormee Kipp in a scene from "Sooyii," which was shot on the Blackfeet reservation with dialogue in the Blackfoot language.

The movie was shot on the reservation.

Viewers of "Sooyii" are asked to disrupt their own habits of language and to critically re-apprehend language and the space it occupies.

Shot entirely on Blackfeet tribal land, the dialogue of "Sooyii" is delivered in the ancestral tongue of its people, the first film to be produced in such form. Those associated with the production are hopeful that it will not be the last of its kind.

“I believe that 'Sooyii' is a message to Hollywood, to directors, to producers, and, even to our own people, to set the bar by including Indigenous language in film,” said Jesse DesRosier, who translated the script to Blackfoot and appeared in the film.

DesRosier, a teacher of the Blackfoot language at Cuts Wood School in Browning and Blackfeet Community College, instructed the tenets and structure of Blackfoot to the cast. "Sooyii" carries with it a deep sense of urgency, because the Blackfoot language, he said, is greatly in danger of erasure, of becoming a moribund artifact of the culture.

“We are in a fight against time, with elders dying ... ,” DesRosier said. “The film is the starting pointing for all people to learn an Indigenous language in Montana.”

Conceptually and historically driven, "Sooyii" is a powerful exhibition of art, though, with its plot of a young Pikuni man, Creature Hunter, witnessing the devastation wrought on his community from the horribly contagious spread of disfiguring, deadly smallpox. There is not much here that qualifies as a “pretty” picture.

“We knew how beautiful Montana would be,” said director and writer Krisztian Kery. “But the story is not beautiful. We had to have the discussion, how do we do it that we are not making a landscape film and not confusing the two ideas (of the beauty of Montana and the starkness of the script). The land itself was beautiful and we shouldn’t hide it. But the land had to be harsh in a sense, too. The elements where the sick people need go across the lake to stay away from the village and not to infect the healthy people. The scenario was very dark. It is a sad story.”

"Sooyii" was filmed outside of Dupuyer at Swift Lake. A gravel road to the dam provided the easiest access to shooting locations, much of it on the land of stuntman and actor Pat Judge Hall (who plays a Pikuni elder in a flashback scene). Hall’s ranch shaped the backdrop of the indubitably mystical river and mountain panoramas; his shop became the makeshift studio where the interior scenes were produced. Nineteen filming days stretched across July and August 2020.

Indeed, one of the key elements adding a layer of gritted realism and melancholy awareness to "Sooyii" is that it was filmed on the ancestral land of the Blackfeet people.

“For my ancestors, they have been fortunate enough to retain some of our traditional homeland,” DesRosier said. “Not many tribes in the U.S. and Canada were able to do that.”

In this, the story line of "Sooyii" somehow, simultaneously dwarfs the vistas of the camera.

“The storyline covered up most of the scenery,” said stuntman coordinator Danny Edmo, a graduate of Browning High School and an accomplished bull rider. “At first you notice the scenery and then you don’t notice it at some point. Filming was at two spots, basically, and it was amazing to shoot there every day for four weeks or so.”

DesRosier said that as a young boy, he spoke the Blackfoot language out of curiosity and his mother spoke it in the family home frequently. As an adult, his father opened up to it, too, eventually studying it enough to recite a full prayer in Blackfoot.

Language offered Jesse a sanctuary for his own being, an identity and connection to his past. Now age 33, his commitment to its survival isn’t negotiable.

To employ the Blackfoot language in the film, Jesse recorded all of the dialogue and the production team sent these recordings to the actors, allowing for approximately four weeks of preparation time before filming started. A few actors held a fundamental awareness of the language, though most of them did not possess much familiarity.

“I found out which actors were studying their lines and which ones weren’t,” DesRosier said. “I assessed all of the actors, and for the ones who were struggling, started adjusting some of the lines, shortened them to make it sound as accurate as possible. People will be impressed by the work that the actors put into it.”

Teaching any language to anyone is a big challenge. DesRosier compared his experience with instructing actors of myriad accents on the set of "Sooyii" to the task of preparing kids at one of the local immersion schools for a Christmas-themed play.

“Every Christmas, the kids do a whole play in Blackfoot,” DesRosier said. “We try to start practice a month and a half out, to work them anywhere from two to six hours a day on their lines. That’s to get them comfortable with saying them, and to get them fully understanding and internalizing them.”

Nonetheless, DesRosier, the director and cast of "Sooyii" effectively fused the juxtaposition of speech, culture and art.

“Jesse recorded all of the dialogue so the actors could listen, at first slowly, then at regular tempo, and then putting it down phonetically,” said producer Paige Rasmussen. “He would coach the actors on heavy dialogue days. The crew even picked up a little bit of Blackfoot here and there. To me, the language preservation was an important reason to be a part of the project.”

Statistically, DesRosier estimated there are about 50 or fewer first language speakers on the Blackfeet Nation in Montana. The Blackfoot Confederacy, he explained, contains three other bands in Alberta, Canada, and there are many more Blackfoot speakers if those numbers were to be considered. Also, the number does not adequately reflect all of the children or young learners or community members who are, somehow, applying their interest in experiencing it.

“There is the beginning of a resurgence of Blackfoot language at our (Cuts Woods) school and immersion classes in the public schools and at Blackfeet Community College, where people are willing to learn and understand the importance of language," he said. "This film will only help to promote that.”

Kery first met Browning native Edmo on the set of the 2013 film "The Lone Ranger." At that point Kery had performed in a significant number of European and American television shows and movies as a stuntman.

Edmo, too, had performed stunts in several movies, mostly Westerns (he doubles as actor Johnny Depp in "The Lone Ranger.")

“Krisztian had a script about East Coast natives,” said Edmo, “and after talking about it, I said, ‘How about you make it about the Blackfeet and history of smallpox?”

Raring to go, Kery hopped on the offer with zeal and gratitude. He would create something in an Indigenous language of a Montana tribe, with a village behind him.

“Growing up European, my country (Hungary) was occupied by Russians for 30 years,” Kery said. “It wasn’t until 1989 that we learned about American history, and I was always fascinated by Native Americans. Why were they always portrayed as bad guys? Where did they come from? ... I learned that Spaniards brought horses and trade and how tribes gained weaponry, gained horses from Europeans, and that to me was an interesting part of that history.

"How does a person first meet a horse or understand a horse? There was a point where the Blackfeet did not know how to experience them or understand them. I met Danny (Edmo) and Judge Hall through the horses. They said if I wanted to make a movie about their history, they would hook me up with the right people. I went to Heart Butte on Hall’s property on horseback, and they were excited that someone wanted to come from the outside and make a movie about their lives.”

In the film, no Europeans are present, but the village of the Creature Hunter is brutally ravaged by the effects of the smallpox virus, “the same curse” that accompanied their arrival. There is another fraught subplot illuminating the vicious conflict between the Blackfeet and the Shoshone.

“Shoshone learned about biological warfare and gained territory by wiping out people with smallpox,” Kery said. “If you survived, you were fine and you would never have it again. But the Shoshone used it as a method of wiping out different camps … Horses were introduced to the Blackfeet by the Shoshone. Before the Europeans arrived (in western Montana), the Blackfeet never had seen a European, but they had the smallpox virus, and they had horses and certain weaponry even before they had met Europeans.”

Stuntman coordinator Edmo said the story lines of "Sooyii" — ethnic conflict, the curse of a plague, the dark spirit of human exploitation — are both historically telling and eerily topical.

“The story, to me, is about the perseverance and how we have all managed to survive,” Edmo said. “But with the warriors going after the girl (Pretty Creature Woman, an unplanned ally of Creature Hunter), there is the comparison in there to human trafficking and missing and murdered Indigenous women, too.

"There are two stories in one situation. Two major things are going on: smallpox demolishing our people and missing and murdering Indigenous women, and the trafficking. Both situations are about the will to survive.”

The movie’s content is large, impenetrable, abject and pathological in its overtones. Indeed, "Sooyii" could be viewed as a skewered history, tethered to an existential nightmare, waiting to have its darkness deconstructed in the deepening night.

Out of trauma and ordeal, there is the deep harmony of Blackfoot thrumming in the mixture, the language of inheritance and destiny, of resurrection and chronicle, the varied dimensions of its character and continuing influence.

“Just attempting this film was a big deal,” DesRosier said. “It is the first time that Blackfoot language has been spoken on film this way, and it will inspire generations now, and it will be saved in time forever. It will empower people willing to learn and critics. Nothing negative can come for this. First language people could critique some of the pronunciations, but that only gives more opportunity for dialogue.”

Brian D’Ambrosio is a journalist and licensed private investigator. His next book, “Montana Eccentrics,” will be released in the spring. He may be reached at dambrosiobrian@hotmail.com