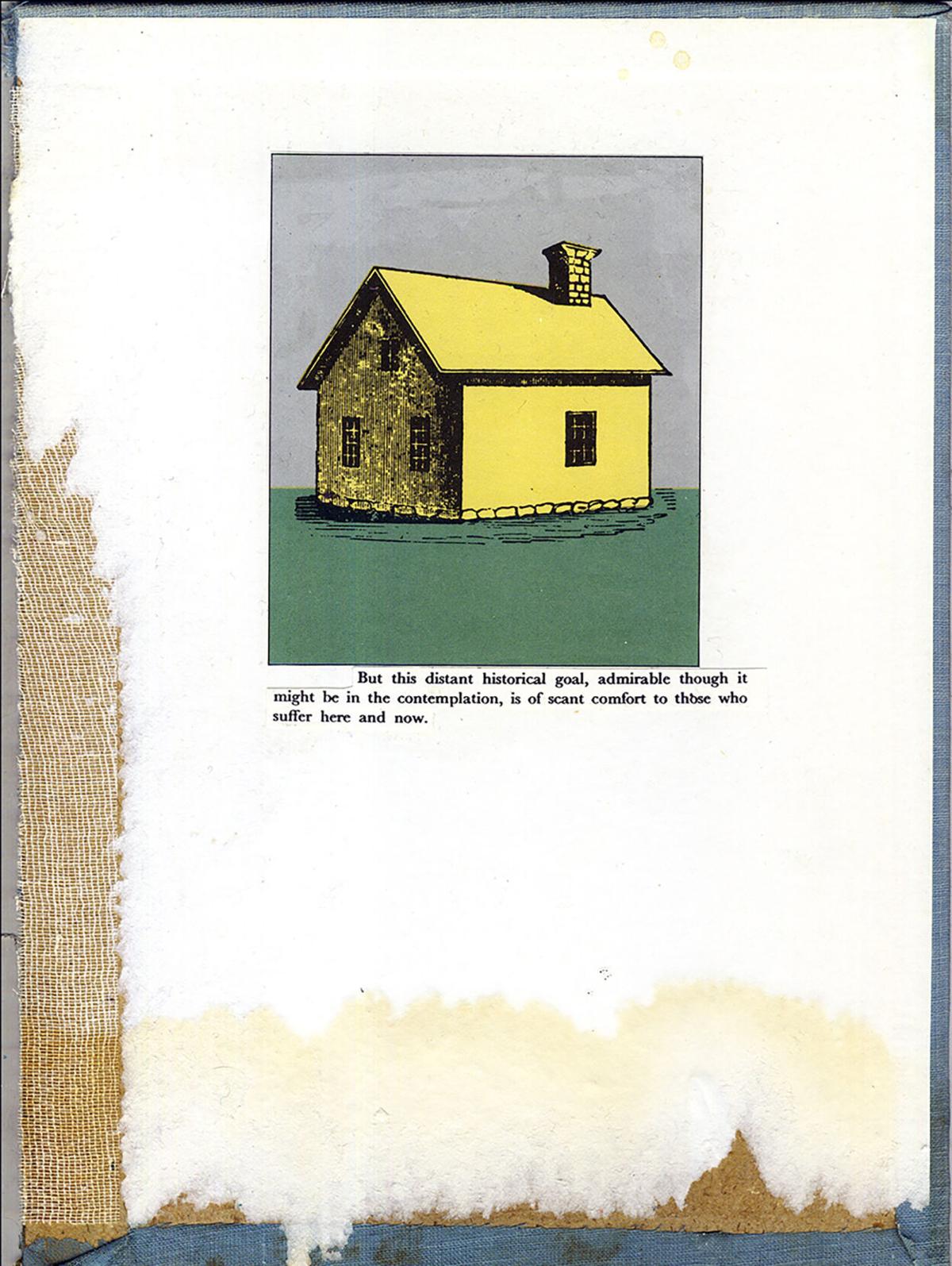 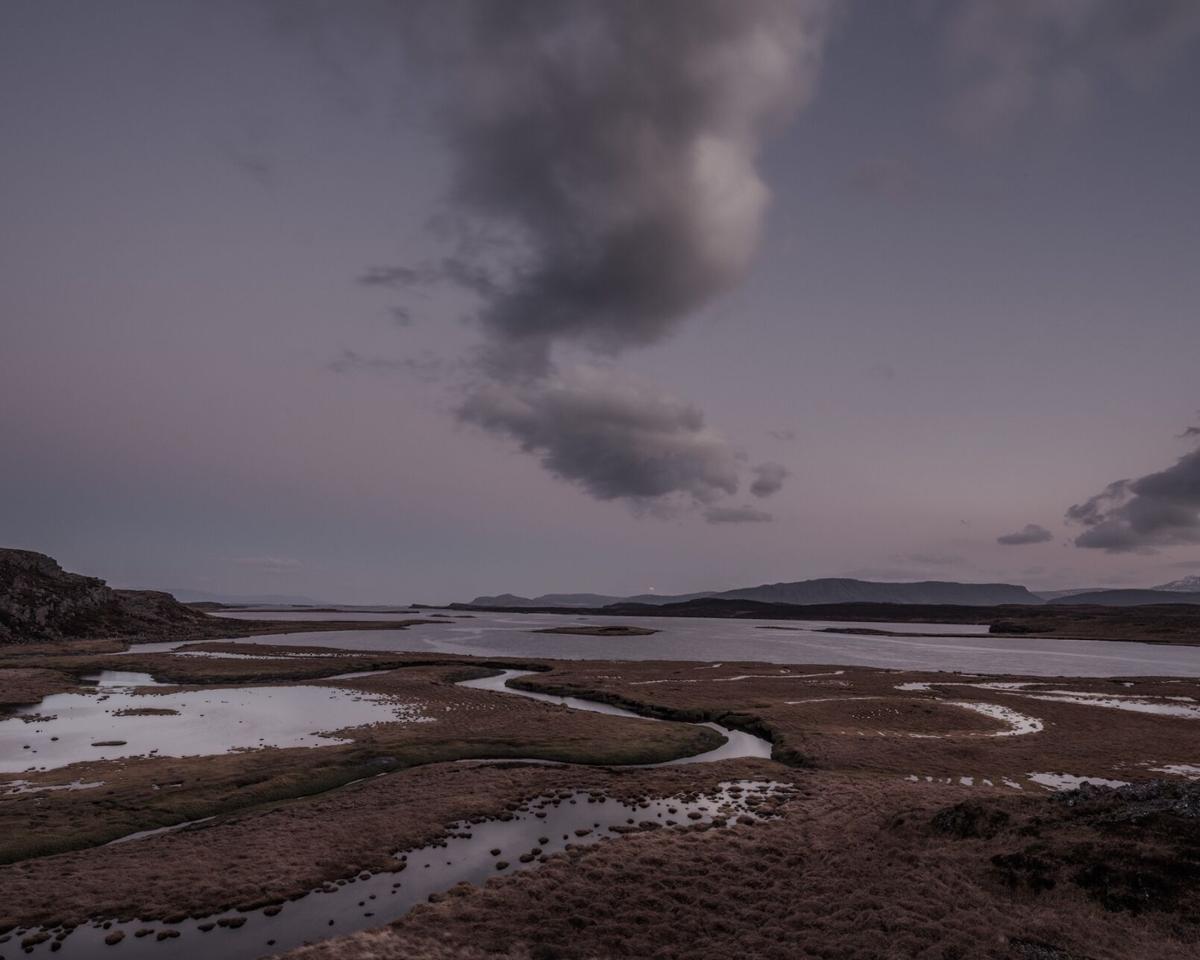 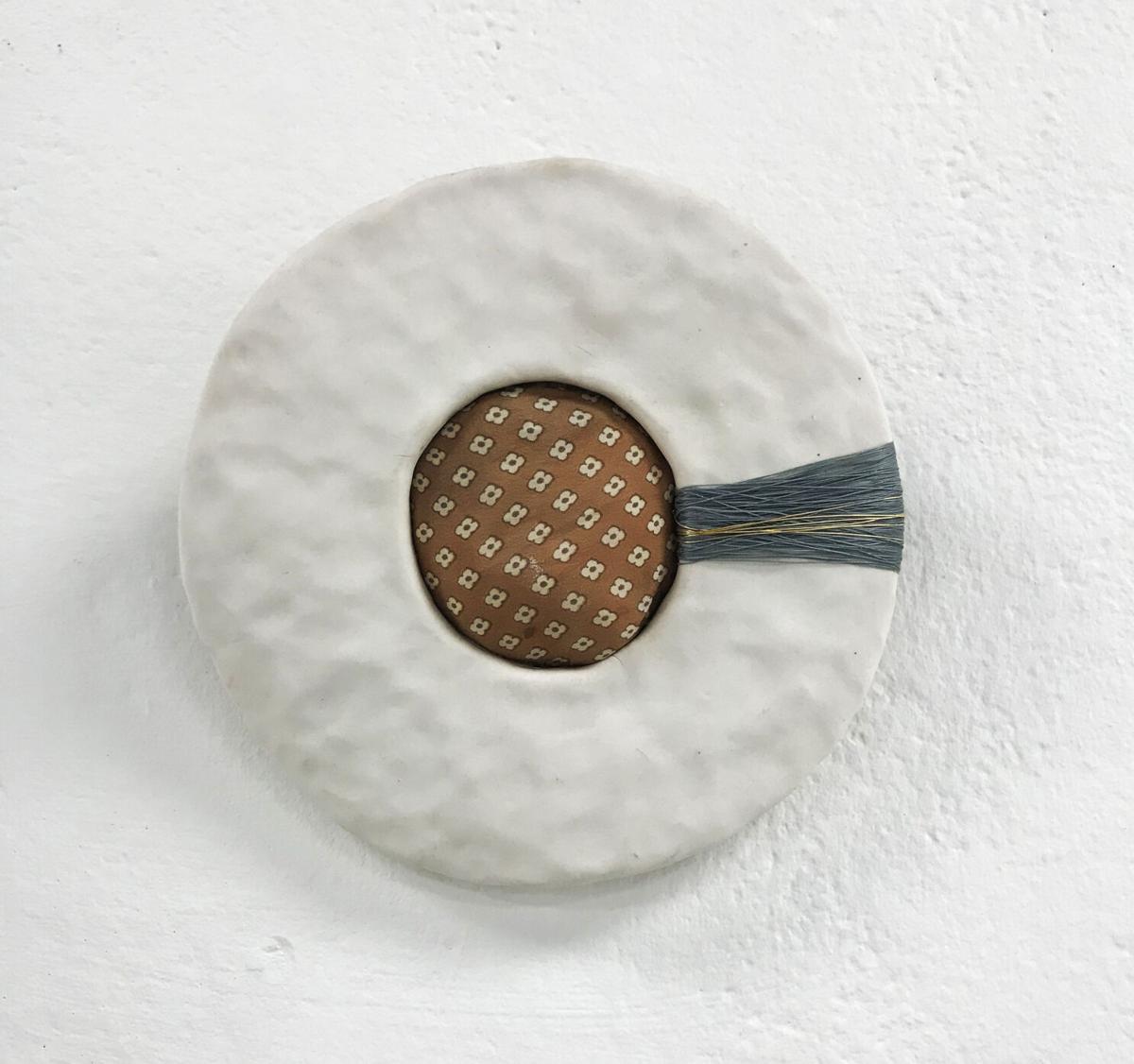 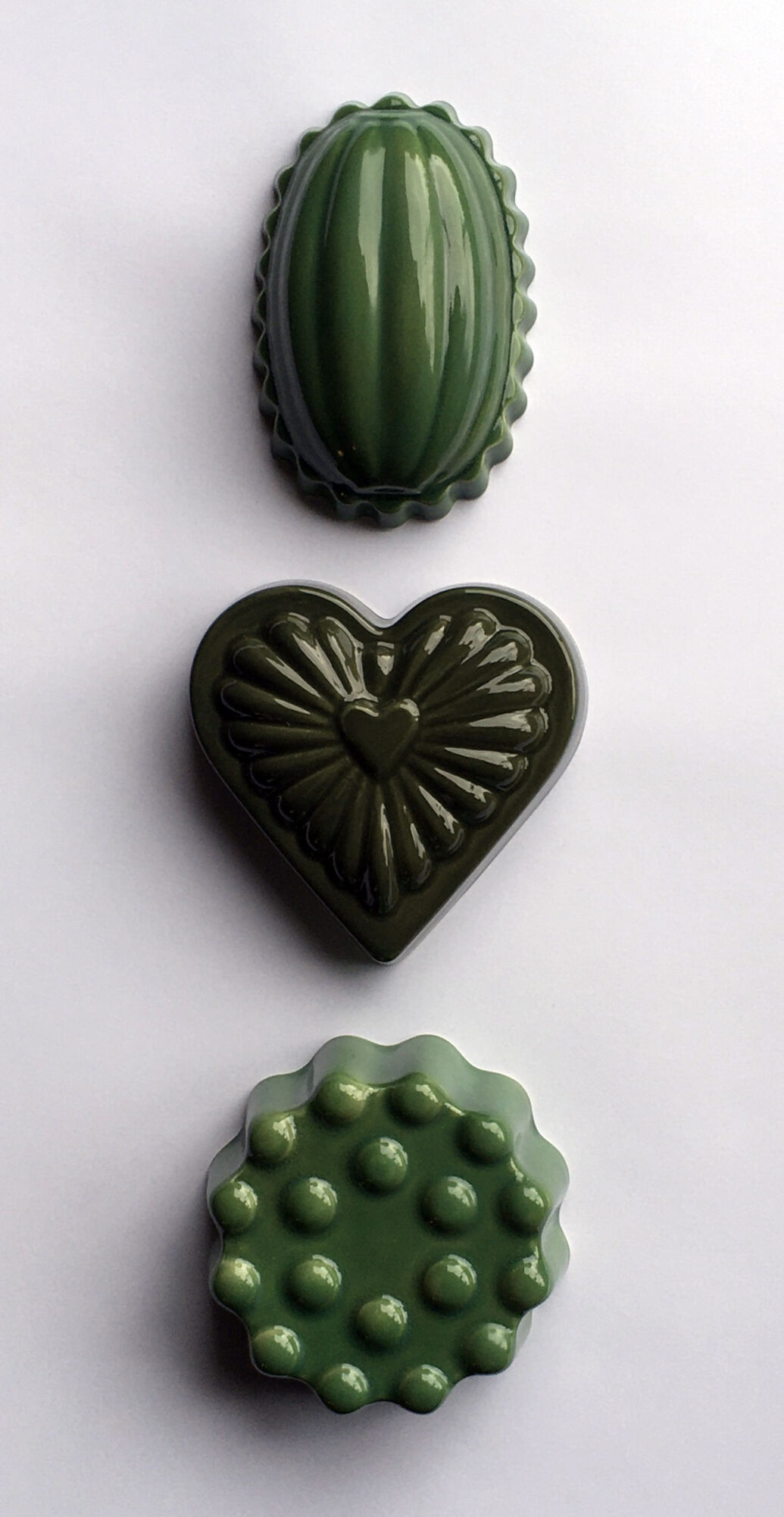 Sarah Tancred, a FrontierSpace MFA alumni, donated "Hardlly Any Work at All," a porcelain and glaze wall piece. 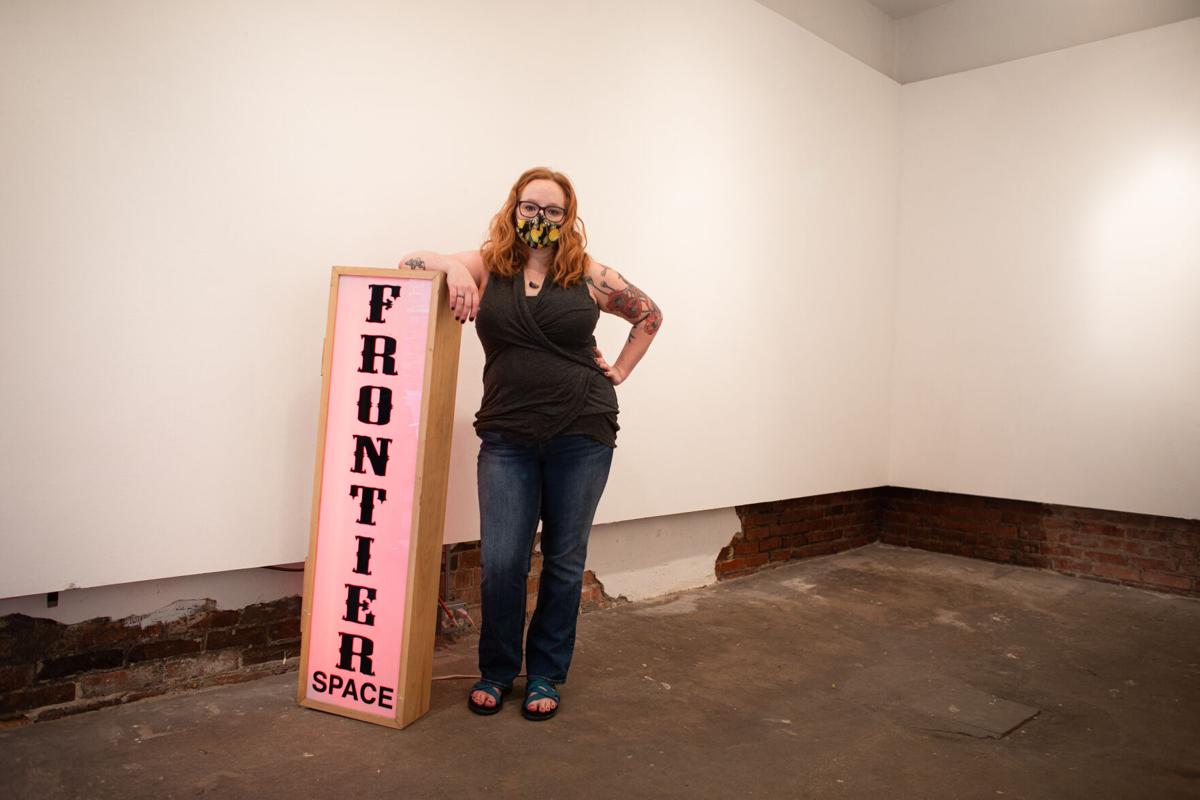 Frontier space co-director and University of Montana Masters of Fine Arts candidate Amanda Barr stands in the doorway of the Frontier Space, a student-run gallery in the alleyway now owned by Bike and Type, a downtown co-working business. The arrival of a new business in the space means the small, accessible gallery may not be able to continue operating. "Little experimental galleries are how artists get started," said Barr. "This gallery is unique and it's really important."

Sarah Tancred, a FrontierSpace MFA alumni, donated "Hardlly Any Work at All," a porcelain and glaze wall piece.

Frontier space co-director and University of Montana Masters of Fine Arts candidate Amanda Barr stands in the doorway of the Frontier Space, a student-run gallery in the alleyway now owned by Bike and Type, a downtown co-working business. The arrival of a new business in the space means the small, accessible gallery may not be able to continue operating. "Little experimental galleries are how artists get started," said Barr. "This gallery is unique and it's really important."

After losing its rental off West Pine Street, the 10-year-old gallery is holding its annual auction online to pay for a trailer that can be renovated into a transportable forum to share contemporary art.

“This is such an important year for the auction because this is really the opportunity for FrontierSpace to continue for future generations of students and the community,” said Amanda Barr, a co-director and University of Montana MFA candidate.

Since it was founded a decade ago, the gallery has been independently run by a succession of UM MFA candidates, providing a venue for visiting and local up-and-coming and established artists on First Fridays, typically in non-commercial vein that can be difficult to find elsewhere around town.

The online auction runs from Oct. 30-Nov. 1, with a target of $5,000. The co-directors want to buy a trailer that’s 24 feet long, 9 feet wide and 10 feet tall, towable by truck, that can be stored at the University of Montana when it’s not in use. In recent years, artists in Missoula have experimented with pop-up art shows in smaller trailers parked on Higgins Avenue during the art walk. FrontierSpace’s trailer could have potential for those nights, or other educational outreach projects — bringing art to the reservations, farmers markets, large art auctions elsewhere around the state, or regional art conferences, Barr said.

Barr said the “flexibility” and “potential” are wide. “It would be up to the directors how much they wanted to do with it, but the opportunity would be there,” she said.

FrontierSpace was started up a decade ago by Will Hutchinson and Nathan Tonning as a “no profit” art space, much like a loft studio in a bigger city. Since then, it’s been passed down from groups of graduate students, affiliated with but not run or funded by the School of Art. They pay the rent themselves, and formalized from zero-profit to a 501(c)3 nonprofit several years ago to help fund it.

FrontierSpace’s homebase from founding until this summer was a small storage space off in an alley off West Pine Street that they’d outfitted as a white-cube gallery. While small, it was a reliably surprising stop during the art walk — you might see video installations about toxic masculinity, playful ceramic sculptures of animals, sound art emulating the aurora borealis. The artists themselves and students and locals were usually clustered outside the gallery trading ideas, even when the temperatures dropped.

That property was purchased this summer and renovated into a co-working space, and the gallery and new owner couldn’t come to an agreement on rent and terms of use.

Barr said that a comparable rental in Missoula would now cost $900 to $1,800 compared to their previous rent of around $300 — again, paid by students — so the trailer seemed like a safer option to ensure the gallery wouldn’t yet again get priced out by the city’s rising rents.

Besides providing art-walkers with challenging and thought-provoking work, the students involved gain experience running a gallery — booking and setting up shows, lectures and more, and gaining connections to artists outside of Missoula.

A number of those alumni donated pieces: Kate Lund, Sarah Tancred, Tessa Jones, Molly Rivera and Claire Melli among them.

Barr pointed to their career paths after graduating and how the experience running a gallery aided them — many now teach or manage studios.

Beth (Huhtala) Korth was hired at the Tippet Rise Art Center, an art park and musical hub located outside Fishtail north of Red Lodge that hosts work by internationally-known sculptors and performers. She’s the education coordinator and visitor center manager at the large-scale art park, a job that’s not common.

Like the other alums, she wrote a statement about her experience:

“FrontierSpace was such an incredible and formative experience for me. It taught me many hard lessons and where I failed in that environment from time to time I had learned and gained the tools I needed to be successful later on.”

The online auction includes more than 30 pieces by about 30 artists. They range from alumni to current University of Montana students, graduates and faculty. The starting bids are as low as $5 for ceramic cups to $300 for an Icelandic landscape photograph by UM professor Matthew Hamon that was part of an exhibition, "Ratljóst," at the Montana Museum of Art & Culture last year.

Since the auction is online for the first time, each piece includes a starting bid and a buy-it-now price. (Pick-up is free, shipping will have an extra fee.)

Ideally, they’ll meet their goal and can start renovating the trailer into a white-cube gallery with proper lighting during December and January. Even before they lost their space, they’d remained closed to the public because of the pandemic. Instead, they used the gallery to set up online shows.

That’s another potential benefit for artists during the pandemic once the trailer is set up — artists can install and light a show, and invite whatever limited number of people they'd like, and display a completed exhibition online.

"At the very least when we put them online, they weren’t just photos of work. It was photos of the work together in installation. The pieces could talk to each other and you could show that, but without a space to even let the install work, it’s just photos of work,” she said.

The 10th anniversary benefit auction for FrontierSpace gallery runs from Oct. 30-Nov. 1 online through eBay. Go to frontierspace.org or the gallery’s Facebook page for more information. At 5:30 p.m. Friday, Oct. 30, the nonprofit will hold a Zoom artists’ talk with co-directors and alumni Amanda Barr, Joshua Eck, James Louks, Brooke Armstrong and more. The gallery is a 501(c)3 nonprofit and is accepting donations as well.