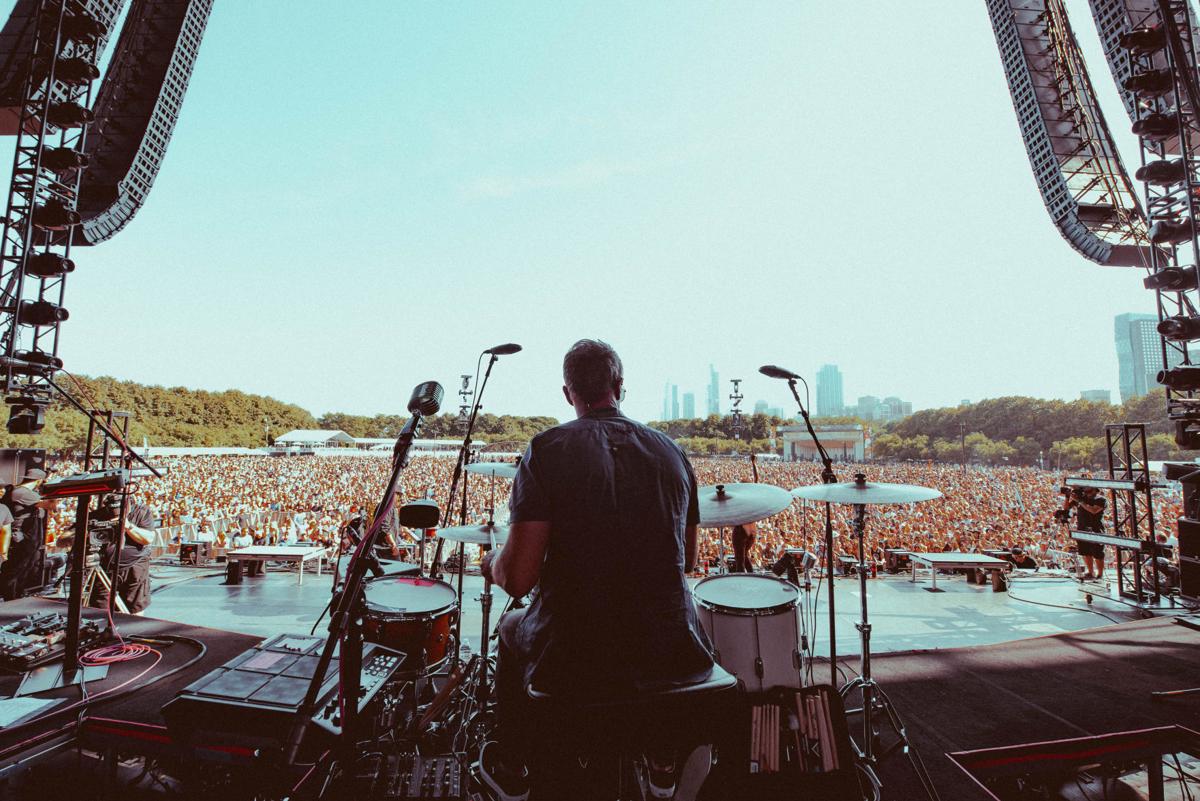 John Wicks, a Missoula resident and drummer, has returned to live concerts with L.A. soul-pop band Fitz and the Tantrums. Wicks is seen here performing during a tour leg preceding their Aug. 17 show at KettleHouse Amphitheater. 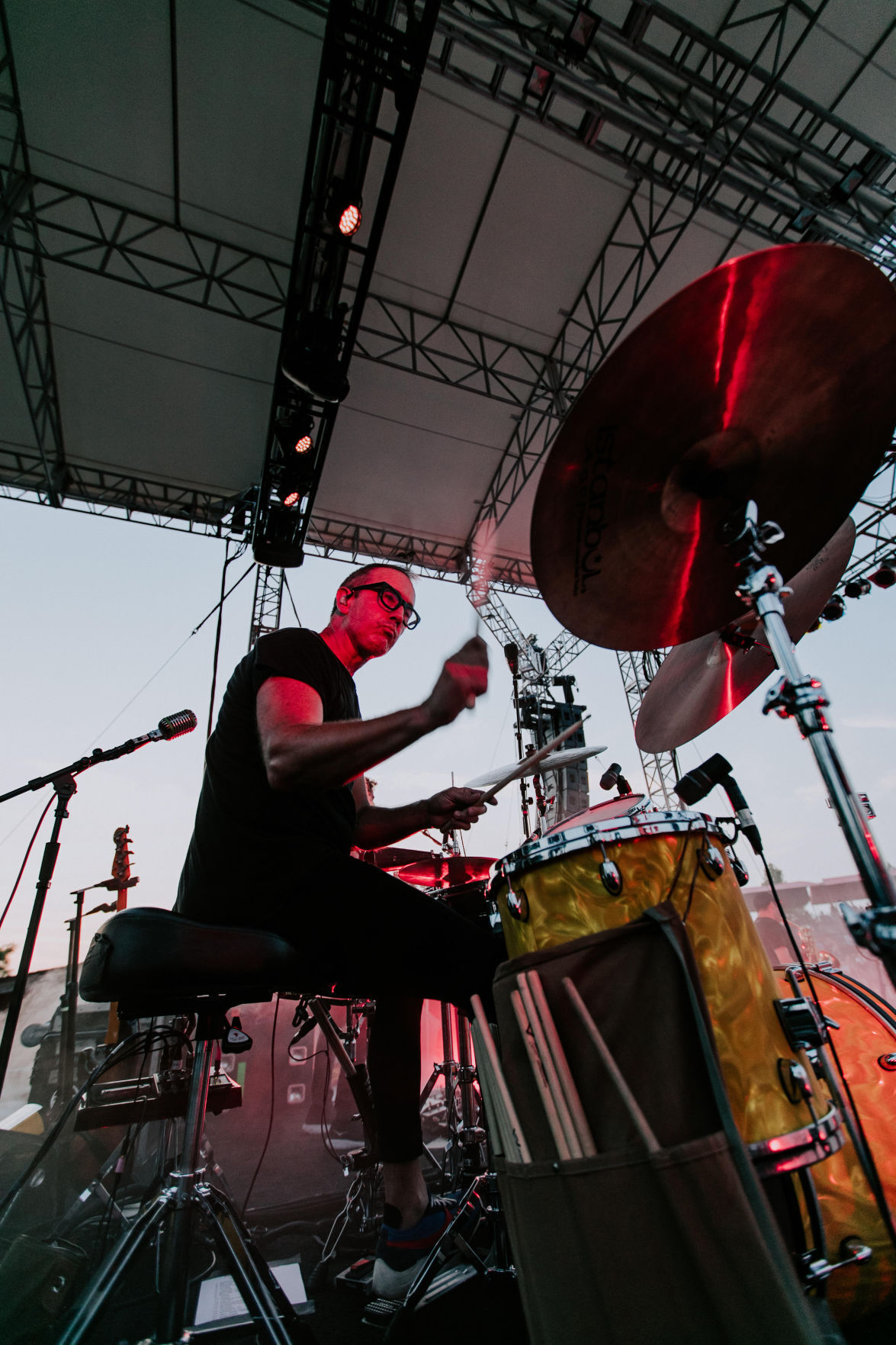 John Wicks, who plays drums for Fitz and the Tantrums and co-owns Drum Coffee in Missoula, spent the last year working on side projects and woodshedding. The band has returned to the road, with a stop at KettleHouse Amphitheater on Aug. 17.

John Wicks, a Missoula resident and drummer, has returned to live concerts with L.A. soul-pop band Fitz and the Tantrums. Wicks is seen here performing during a tour leg preceding their Aug. 17 show at KettleHouse Amphitheater.

John Wicks, who plays drums for Fitz and the Tantrums and co-owns Drum Coffee in Missoula, spent the last year working on side projects and woodshedding. The band has returned to the road, with a stop at KettleHouse Amphitheater on Aug. 17.

Like everyone else, John Wicks spent a lot of time at home in the past year digging deep into his passions — in his case, drums and coffee.

The Fitz and the Tantrums drummer was hunkered down in Missoula, spending time with his family, practicing on his instrument, taking classes, recording a new album with Jeff Ament, and stepping up his roasting operations at Drum Coffee.

But now his band is back on tour, with a stop on Tuesday at KettleHouse Amphitheater, its first at the venue in his home base of Missoula.

“I missed it. You know, having a year off really made us all realize how important it is. And I definitely missed ... that aspect of it. You know? It's nice to be doing it again,” he said.

It's something of a reset, too. In summer 2019, Fitz and the Tantrums released “All the Feels,” the band’s fourth studio album.

“We were just getting started doing tour support for that record ... and now we’re trying to kind of continue where we left off.” A new album nowadays requires lots of live shows to succeed, and not being able to do that made it feel “almost like it didn’t happen.”

During the pandemic, they were in demand to play virtual shows, including one at Red Rocks, where their audience consisted of cameras but no crowd.

Since the band stayed busy, getting back onto the road this summer required more mental preparation than anything else. “We have been together so long that once you hit the stage, it’s like you never left. That part of it didn’t require too much prep. It was mainly just like, ‘get myself psyched up to go out there.’ ”

In July, the group played a three-and-a-half week tour, mostly in the South and East. It felt somewhat strange, as “we are kind of some of the first artists to go out and try this,” he said. Many were alternate, nontraditional outdoor venues because the crowds were too large for indoor shows. Musician friends messaged him with questions about how it felt to be back on stage.

“At the end of the day, it felt great ... it was evidence that we were getting some relief and some sense of normalcy.”

This year is somewhat of an unusual one for the group, as they're finally playing the songs on “Feels" again live. (One of the singles, “I Just Wanna Shine,” racked up more than 26 million streams on Spotify since its release.) After this touring cycle, they can start thinking about the future.

“We're planning on starting to work on a new record soon, now that we can all be together. And you know, I think we all also used the pandemic to compose, and I'm excited to hear what everyone has to offer and brings to the table,” he said.

Wicks and Pearl Jam bassist Jeff Ament have known each other for years, but it wasn’t until now that they dove into a new project, called Deaf Charlie. Both had the demands of their main gigs put on hold during a pause, a relatively rare occurrence for them.

“We’ve been talking about it forever, but it was just like we never, neither of us have ever had the time,” he said.

Wicks said they were both game to try anything. “Jeff said, ‘The only rule is there’s no rule, and so that was sort of the mantra going into it.’ ”

For instance, the first single, “Something Real,” has Ament singing in a falsetto.

“He’s got this incredible voice and for me, that was the funnest part," Wicks said, getting to act as a second set of ears, "cultivating that and playing producer.”

Besides recording together, they could exchange tracks without worrying about a looming deadline.

“He just heard things in these songs that I didn’t hear,” Ament said earlier this summer. “So I got excited about that and said, ‘Well, you just take them wherever you want,” he said. He thinks Wicks is expressive and meticulous, and “sometimes this stuff takes a while, so there’s no end game. It’s not a band,” more of “a big art project.”

They released the track with a video that features a group of younger Missoula musicians, including keyboardist Connor Racicot, that he met through Drum Coffee. (He employs a lot of musicians and artists.) Tenor saxophonist Cade Chastain plays a free-ranging solo, after Ament encouraged to go far out and make it sound like Albert Ayler.

They contributed to a number of tracks, although there’s no release date in mind for the album yet, as Ament just released a solo album, “I Should Be Outside,” based on a different batch of material made during COVID.

Wicks grew up on Bainbridge Island, Washington, and attended school in that state and then Berklee College in Boston before dropping out because of the cost.

He gigged in New York, and then moved to Seattle, where he played jazz and made a living in coffee shops. After hustling that way for years, he moved to Los Angeles to carve out a career as a session musician, where he met Michael Fitzpatrick, a songwriter who wanted to branch out from commercial gigs like jingles, and they started Fitz and the Tantrums.

That was some 13 years ago. After the band became successful enough, the family — his wife Jenna and their twins, now 12 — moved to her hometown of Missoula. They started Drum Coffee in 2016, circling back to his prior career and passion.

During COVID, the two Drum locations had to shift their business model to emphasize wholesale since more people were brewing at home. “From the roasting standpoint, that was a huge, fun creative outlet, and we have an amazing new roaster that just joined us from Denver who’s really raising our game,” he said.

Wicks has also taken this time to work on a jazz album with a saxophonist, Saul Cline, that he knows from Seattle. “It’s just been inspiring to me to write jazz music, and to think along those lines again because that’s what I grew up playing,” he said.

He’s also done occasional gigs in town with trombonist Rob Tapper, the head of the UM Jazz Program; and spent a lot of time studying online through lessons with East Coast instructors like Dan Weiss for drum set and Brian Shankar Adler on tabla.

“It’s made me appreciate every millimeter, literally every millimeter, of a drum head, and that’s because that’s what tabla drumming is all about,” he said. “It’s producing all these different harmonics out ... of the drum head by where you’re placing your fingers on the drum.”

He’s also been taking classes online to finish his music degree, with hopes of teaching at a university level and improving his skills.

“That's a common thread through a lot of musicians that I know,” he said. During COVID, “we got to go back in the woodshed and really work on our craft again, as opposed to just always, you know, hustling,” he said.

While it wasn’t by choice, and was often weird and scary, “it’s actually been a very beneficial year for me creatively.”

Fitz & The Tantrums and Devon Gilfillian will play the KettleHouse Amphitheater on Tuesday, Aug. 17. Doors open at 6:30 p.m. and the show starts at 8 p.m. Tickets are $32-$45. All ages. Go to logjampresents.com.

Things to do: Stream a local art auction, indie folk, opera or ballet