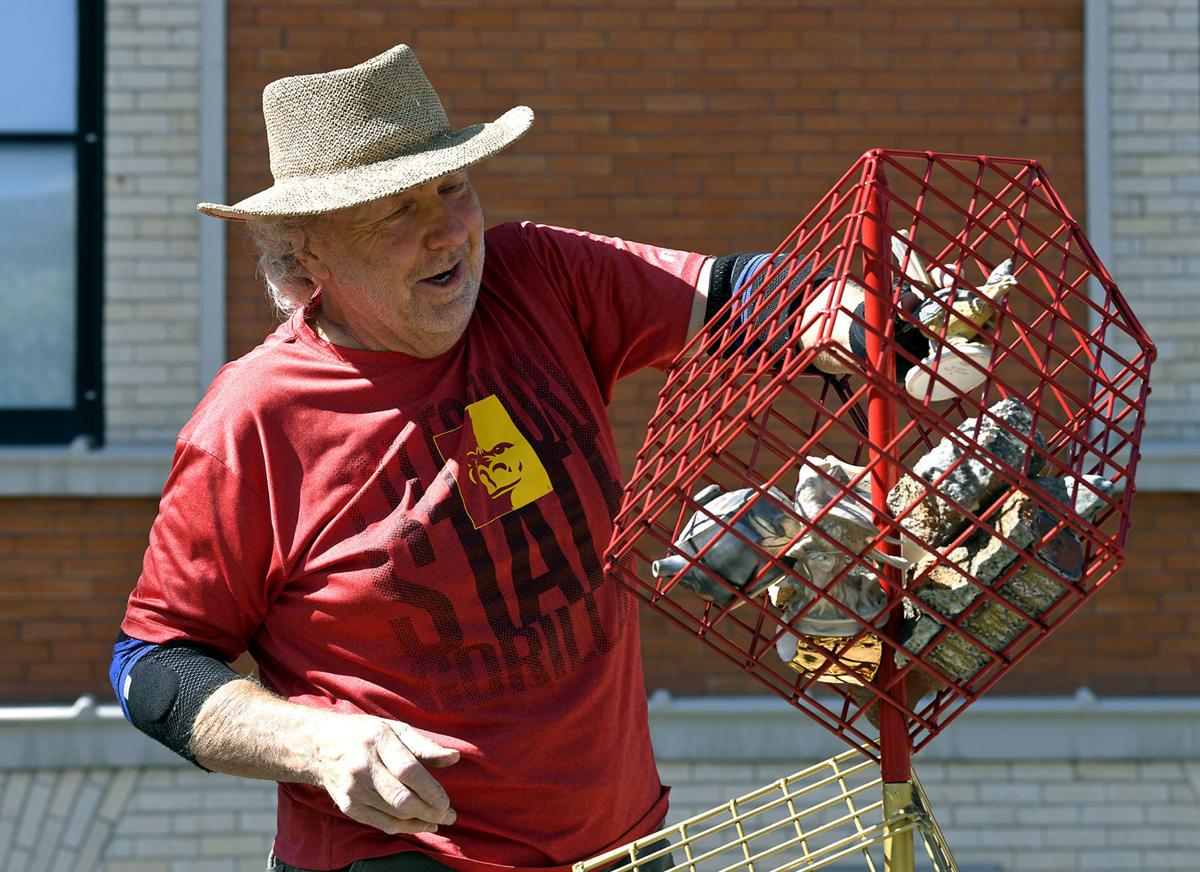 Robert Harrison places a ceramic piece in one of his sculptures as they're installed at the Missoula Art Park on Friday. The wire mesh house-shaped sculptures are full of all types of ceramics along with kiln bricks. 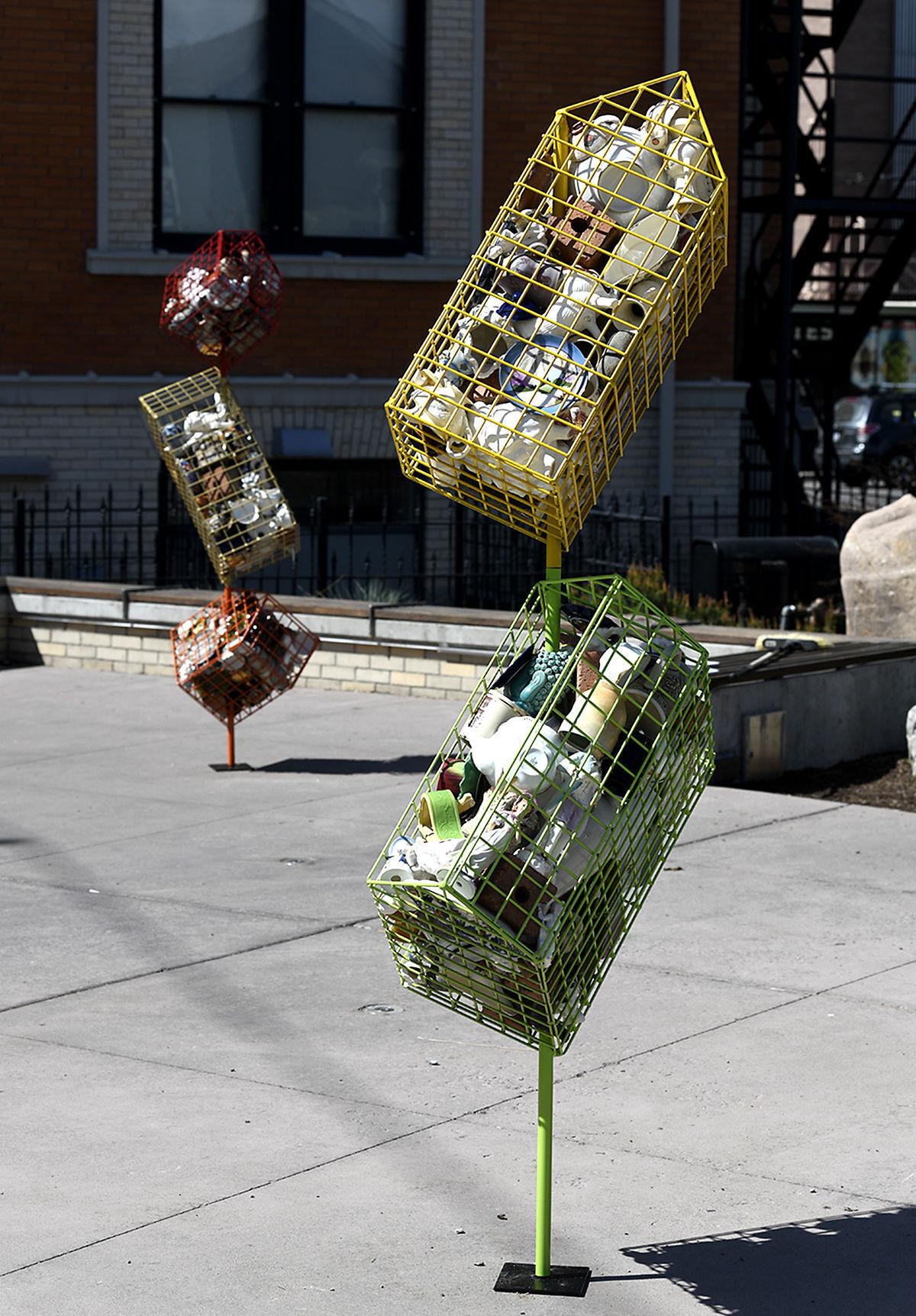 Harrison's installation, "It Takes A Village," was inspired by his trips on the Hi-Line and the stacks of stones inside fencing used to mark property lines.

Robert Harrison places a ceramic piece in one of his sculptures as they're installed at the Missoula Art Park on Friday. The wire mesh house-shaped sculptures are full of all types of ceramics along with kiln bricks.

Harrison's installation, "It Takes A Village," was inspired by his trips on the Hi-Line and the stacks of stones inside fencing used to mark property lines.

Robert Harrison is examining pieces of ceramics, looking for the right fit, and then gently packing them inside wire-mesh cages shaped like houses tilted at angles. Porcelain fawn sculptures, German steins, old-fashioned figurines like Hummels, decorated teacups and plates, mugs made by local artists and students — they all get packed in.

The Missoula Art Museum’s curators, Brandon Reintjes and John Calsbeek, hand him pieces from nearby carts and boxes he drove over from Helena, as he decides the right mixture of styles. One minute he might need a vase, the next a kiln brick, or a Cheshire-looking cat.

They’re assembling his new installation, “It Takes A Village,” at the Missoula Art Park, where it will be on display until October. The four wire-mesh house sculptures simplified down to an iconic cube with a slanted roof allude to homes, and the contents, gleaned from thrift stores and living artists, all point to the idea of community, reuse and reclamation.

They likely don’t resemble anything you’ve seen before, which is “always part of what you strive for,” he said. It might catch the eye of people who aren’t that interested in art. “It could stop a few people in their tracks and at least ask them to have a second look, or in more detail look at what’s in there."

The art park is a joint venture between the MAM, the city of Missoula and Adventure Cycling. It has sites for work near the museum’s entrance, and the north and south sides of Pine Street. The exhibits typically are a “solo exhibition,” with work going up in the spring and staying in place until fall. After COVID scuttled an artist's plans for this summer, Harrison stepped in for what has become his first exhibition of these "house stack" sculptures.

An award-winning artist, he’s created site-specific sculptures around the U.S. and abroad and shown his work around the world. In Helena, he built a “bike tower” based on the historic downtown fire tower — it’s shaped like a tower, too, but the exterior is blanketed with bicycles, painted red and yellow.

The four towers at the Missoula Art Park represent the seasons, with corresponding colors of the steel. Winter is blue, white and purple — the white cage feels extra cool, filled mostly with porcelain. Fall is red, gold and orange; spring, yellow and light green; summer is red and orange, naturally, for the heat. (The red cage is extra large, like a symbol of a record-setting heatwave in August.)

The cage-like forms first occurred to him while driving the Hi-Line, where he would see “a stack of stones in a piece of old fencing that demarcates a field, the corner of a field, from some rancher or farmer.” He thought that might be a way for him to make sculpture, and he began with “spiral stack forms” bound by woven wire. They could be filled with any material, which appealed to another one of his interests. Harrison became concerned about sustainability decades ago, and examined it within his own artwork. He’s written a book, “Sustainable Ceramics: A Practical Guide.”

“A lot of ceramic artists have started to evaluate where their materials come from,” he said. When he was younger, it was more common to import materials rather than try to buy from local sources. It’s not an abstract issue, either — he said certain clay bodies and glazes are being mined into scarcity.

Those early spirals gave way to house-like shapes — he’d thought about becoming an architect but chose art, since he thought it would allow him more freedom. They’re containers that “give me a form to work with,” he said, and allow me to place in them “intuitive collections of clay productions or clay things,” he said.

He’s been a frequent flyer at a few secondhand shops like Goodwill in Helena for the past three or four years, often on sale days looking for old dining ware. “Because they’re treasures, you know. There’s things in here from all over the world that people bring back,” he said. Eventually, the collector dies and these pieces end up on sale for cheap, despite all the memories they once generated.

“I think it all has some worth, some value, to whomever was either collecting it or making it, so for me, it’s all part of that assemblage of material. It’s kind of happenstance,” he said.

The thrift store finds are joined by other materials. For this project, University of Montana art students and the Clay Studio of Missoula dropped off cups and vessels of their own for him to include. The studio took apart its soda kiln recently, so he included old bricks. He brought bricks from the Archie Bray Foundation for the Ceramic Arts, too, as a nod to its importance. (He’s a past president of the center.)

“For me, that becomes a testament to the process of working with clay in the local community,” he said. There’s some locally sourced stones mixed in, too, so “it becomes reflective, or a part of the place, in a sense,” he said, not unlike a sculptural version of a collage. All the “reclaiming, recycling, repurposing” come together.

He reuses the pieces after an installation comes down — he’s accumulated so much of this raw material that he built an annex next to his studio to store all of it. Some of the pieces get dinged up — a Hummel figurine came out of the box, but the head was gone. He placed it in anyway. The head later turned up inside a cup.

He’ll happily point out details about various pieces, like a shiny gold cup. It probably “cost a pretty penny at the time, because that’s gold. That’s gold luster, which is typically 24 karat gold,” he said. “You brush it on and then you fire it at a low temperature. And there was a whole set of those, I mean I couldn’t believe it."

Another cup has vintage Glacier National Park commemorative lettering. “You never know what you’re gonna find. There’s bits and pieces of everything from all over the world.”

The finished “spring” sculpture, with two houses perched at different angles, looks surprising. “They look like they shouldn’t exist, you know? Like they’re so much more dynamic than I anticipated. The movement that green and yellow has from this angle is just tremendous,” Reintjes said.

Arriving next week are some finishing touches — two large wooden houses (one red, one orange) that will go in front of the original Carnegie Library entrance to the museum.

Harrison said he’s grateful to have this kind of venue out in the open for passersby to see it.

"I think quite a few people do larger-scale outdoor work, and there are very few public venues really, to put it, so I think it’s very much appreciated."

Robert Harrison’s exhibition, “It Takes A Village,” is on view at the Missoula Art Park through Oct. 15. An outdoor reception is being planned for June 23.