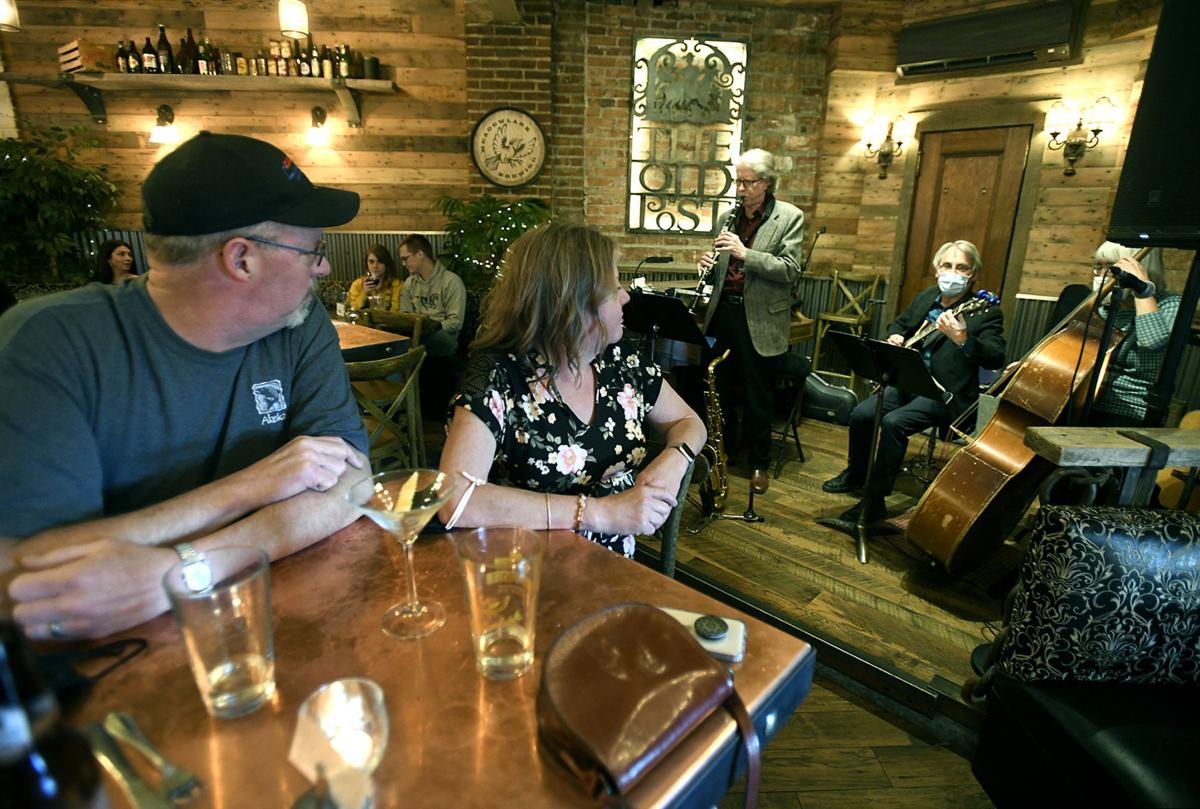 Cameron and Traci Duffin listen to Chuck Florence, David Horgan and Beth Lo last Thursday at The Old Post in Missoula. The bar is one of the venues in town starting to feature live music again. 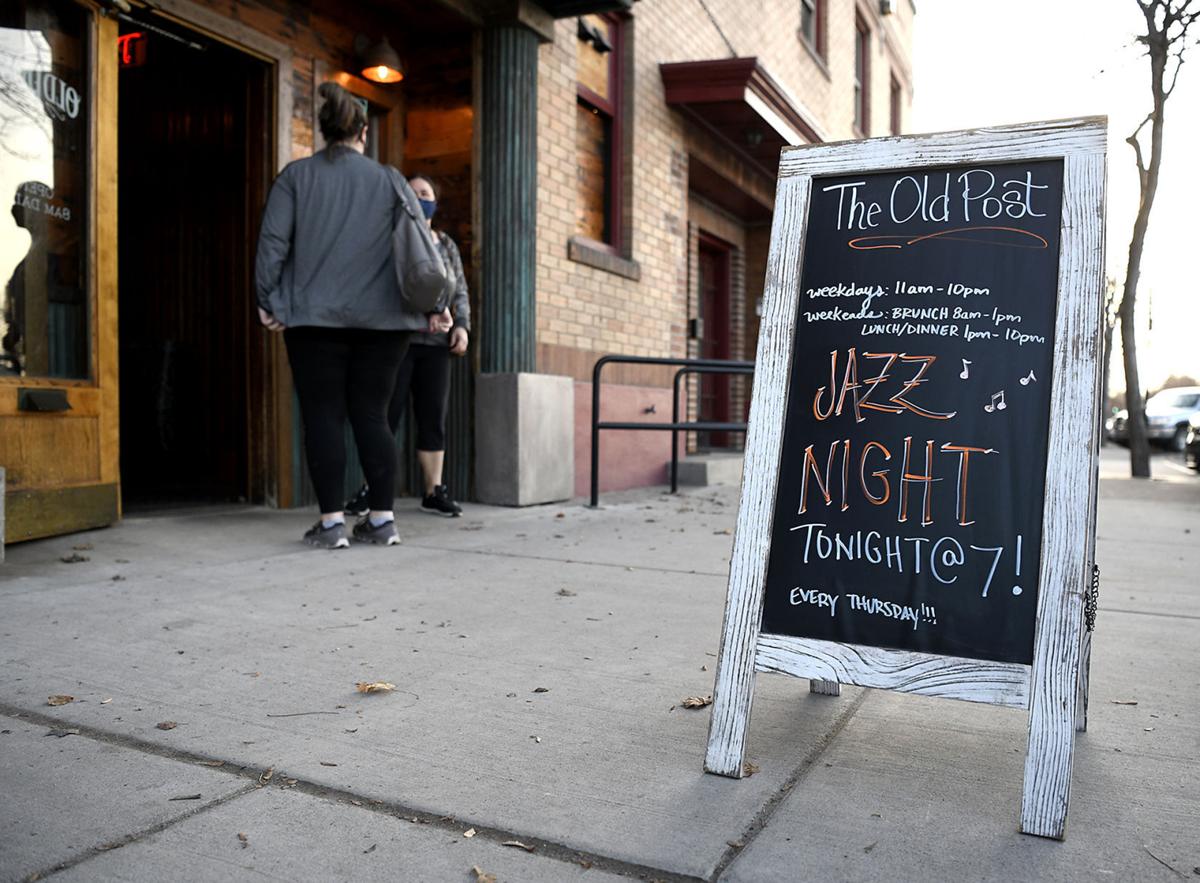 The Old Post is hosting a live local jazz night on Thursdays.

Cameron and Traci Duffin listen to Chuck Florence, David Horgan and Beth Lo last Thursday at The Old Post in Missoula. The bar is one of the venues in town starting to feature live music again.

The Old Post is hosting a live local jazz night on Thursdays.

Some venues around Missoula have started offering live local music again, whether indoors, downstairs, or in a scenic outdoor setting.

The Old Post, renovated during the pandemic by new ownership, is dipping its toes in with a Thursday jazz night, from 7-10 p.m.

Ten Spoon Winery, with its vineyard grounds in the Rattlesnake just outside its taproom, was one of the few steady venues for outdoor live performances last season — hosting small groups of musicians or even standup comedy, along with pizza.

Stave & Hoop, the “speakeasy” style venue downstairs from Pangaea on the corner of Higgins and Broadway, was among the first to dive in with live events again all the way back in December.

The new Old Post opened in mid-December after renovations from new owners Kimberly and Tom Durham. The upgrades were “cosmetic” instead of structural, meaning the interior is familiar to fans of the old OPP style, but significantly spruced up, with a new bar, wall coverings, floor coverings, furniture and decor, including a low, vintage-style stage in the southeast corner of the room.

“The Old Post needed music,” Kimberly Durham said, adding the city is filled with musicians, from veterans like that jazz group, to University of Montana students, who all lack places to play, even before the pandemic.

The features include a jazz night on Thursdays in April, with Kimberly West (vocals), Chuck Florence (sax, clarinet), David Horgan (guitar) and Beth Lo (bass), from 7-10 p.m., and a comedy night on the last Sunday of each month.

They’re open to having music any night of the week, “whenever we can,” or perhaps late night, including small acts, whether solo or up to four-pieces, of all genres, she said.

Any musicians interested can contact Shane Coburn at 406-529-9901. Future endeavors could include music outside, or the parking lot shows that happened on busy summer nights under the prior management.

One of the first spaces to resume live music, starting back in December, was Stave & Hoop, a speakeasy-style hangout. It’s located downstairs from Pangea, a global-fusion restaurant in the former Liquid Planet space on Higgins Avenue. (The entrance for the speakeasy is, naturally, in the alley.) The restaurants are a project from Scott Billadeau, LP’s owner and a classical musician and former UM professor, and partners Chad Morgan and Skyla Sisco.

The basement space was formerly occupied by Garden City Bottling & Liquor Co., and its name comes from parts of the whiskey barrels — the wooden staves held together by metal hoops — and it has other historical flare, such as walls that were charred in a 1920s fire.

Kyle Riggs, managing partner for the restaurant group, said music was always part of their plan for the space — everything from bluegrass, jazz, country, some rock and more. They built a full stage with a grand piano and professional sound setup with an eye toward having more acts and presenting out-of-town acts. (They have connections in the jazz world, for instance.)

Right now, they host music on Thursday nights. Vocalist Kelly Sinclair, formerly of Shodown, has gone solo and reliably drawn crowds, along with “house pianist” Doug Olsen, who can perform feats like dueling pianos. They also offer trivia nights and burlesque shows from the Cigarette Girls, which have sold out, along with comedy nights. Go to staveandhoop.com to see their calendar.

Capacity is limited to about 60 people with social distancing, and the cover is $5 on your bill. When the time is right, the capacity could reach 90.

Those who want to avoid the indoors can head to the Rattlesnake.

Ten Spoon Winery, with its scenic lawn outside its taproom, was the only steady venue for live, in-person outdoor performances last season — hosting small groups of musicians or solo acts and Revival Comedy nights, and serving up its own brick-oven pizza.

They’re open three days a week with live music on Fridays and Saturdays and some live events on Thursday evenings. In May, Revival will start up again with comedy every other Thursday. Ten Spoon’s season as a whole typically runs from April 1 through the end of September, depending on the Montana weather.

Last season, the music nights would draw anywhere from 50 to 75 people, she said. This year, after opening up the calendar, it only took a week and a half to book up. Again, the shows are outside only. Inside the tap room, customers have to wear masks. Justice said the precautions paid off in 2020, and they never had a single employee get COVID or have a case traced to their venue.

The acts this year include guitarist Larry Hirshberg, harmonies from Basses Covered, the “kindie-rock” band Salamanders, violin-guitar folk from Judith Gap, singer-songwriter Travis Yost and contemporary jazz group Cross-Talk. Justice said they’re open to having music on Thursdays, or perhaps more nights of the week, and welcome musicians, including emerging acts, to reach out.

Check Ten Spoon’s Facebook page for a schedule, or go to tenspoon.com for more information.

The winery has been steadily booking up with rentals, too, with slots still available. The Zootown Arts Community Center, for instance, is hosting its annual Mini Show benefit on May 22.

Bar-style venues have been the first to enter the fold with live music, which has been allowed under bar and restaurant directives for months. “Events” fall under alternative rules.

On Thursday, the Missoula City-County Health Department said that the area has reached a marker in its vaccination rate and case count in which events don’t require size restrictions “so long as they could still safely distance attendees, ensure attendees would wear face coverings, ensure no one with COVID-19 symptoms is in attendance, and provide hand sanitizing/hand washing stations.”

The news release also noted that 22% of the eligible population in the county is fully vaccinated and herd immunity has not been met.

“Because of this, it remains absolutely critical that event organizers take every step they can to ensure events are as safe as possible and don’t diminish any progress Missoula County has made against this virus.”

They encouraged everyone to go to covid19.missoula.co to schedule an appointment for a vaccine. They are free.