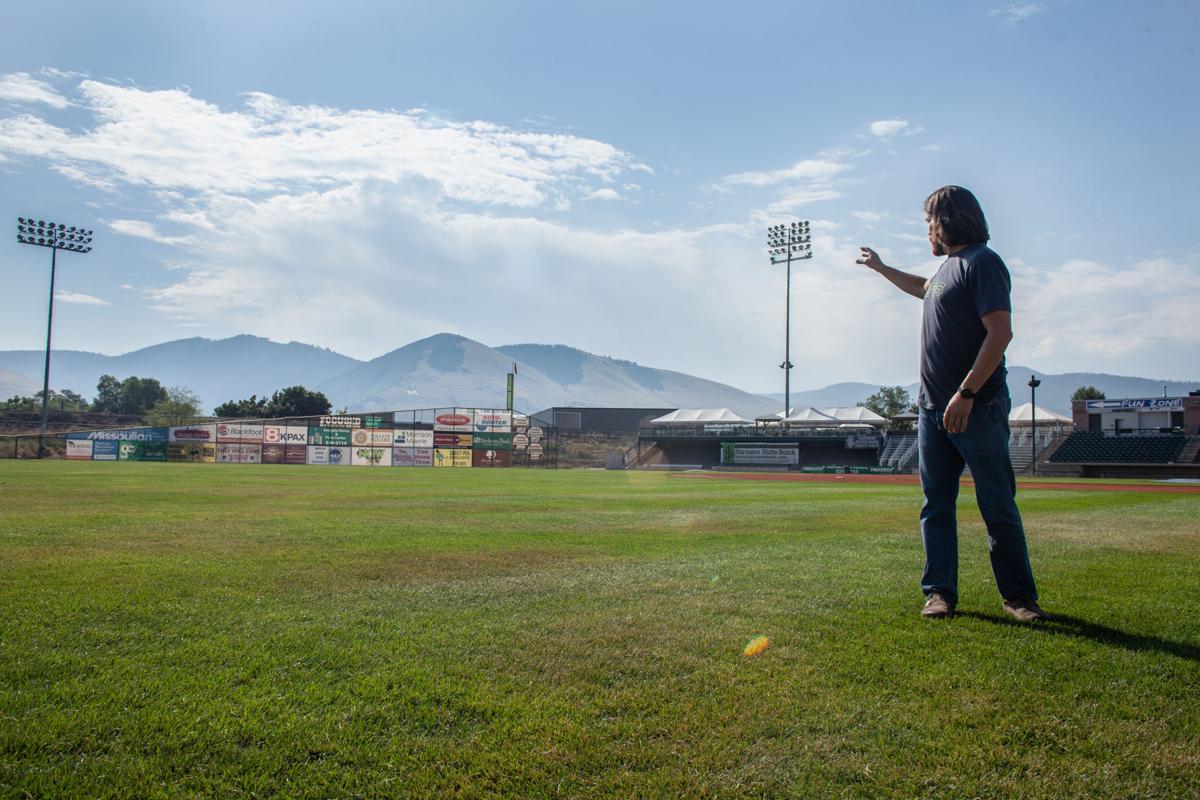 Logjam owner Nick Checota explains the concert plans in the outfield of Ogren Park Wednesday, including bathroom and concession locations as well as grass protection and stage direction. The stadium is in the process of final preparations for the Mumford & Sons concert that will bring more than 12,000 people into the facility on Sunday evening. 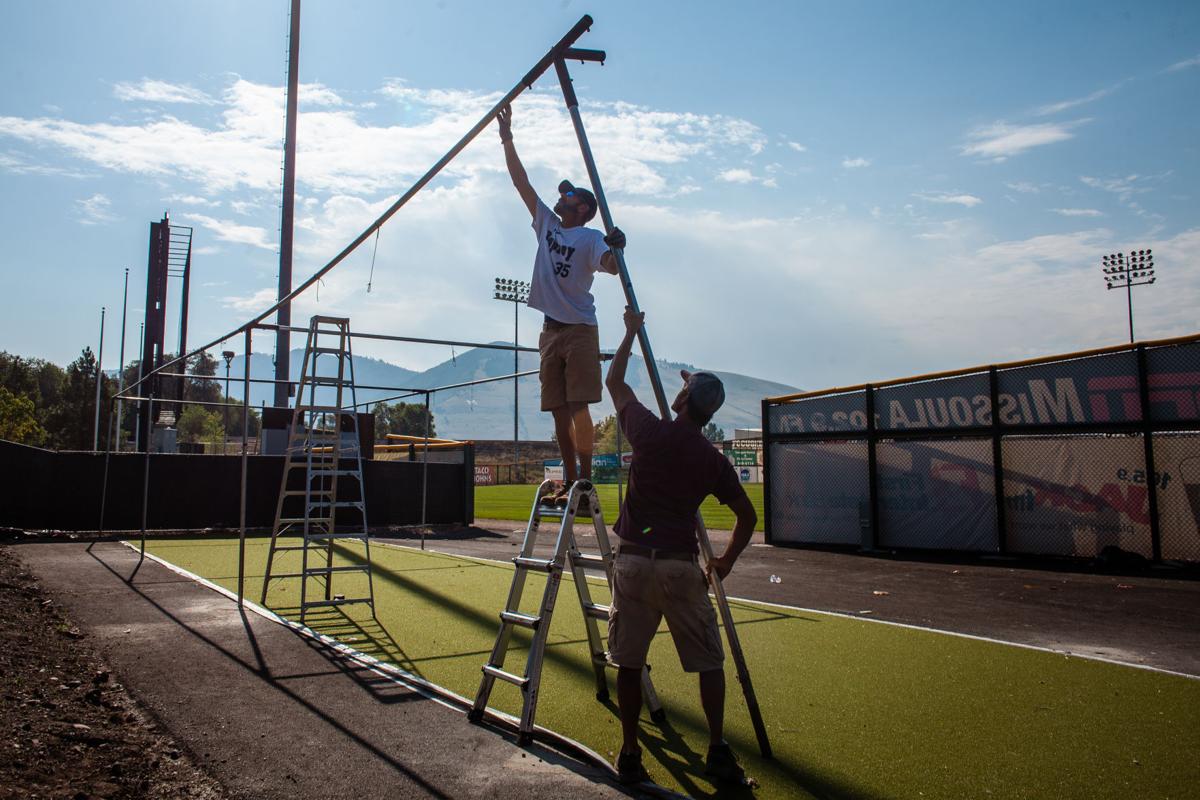 Osprey groundskeepers Trey Eure, above, and Ray Kroenke dismantle batting cages Wednesday morning behind Ogren Park so tour vehicles will be able to drive down to the field. 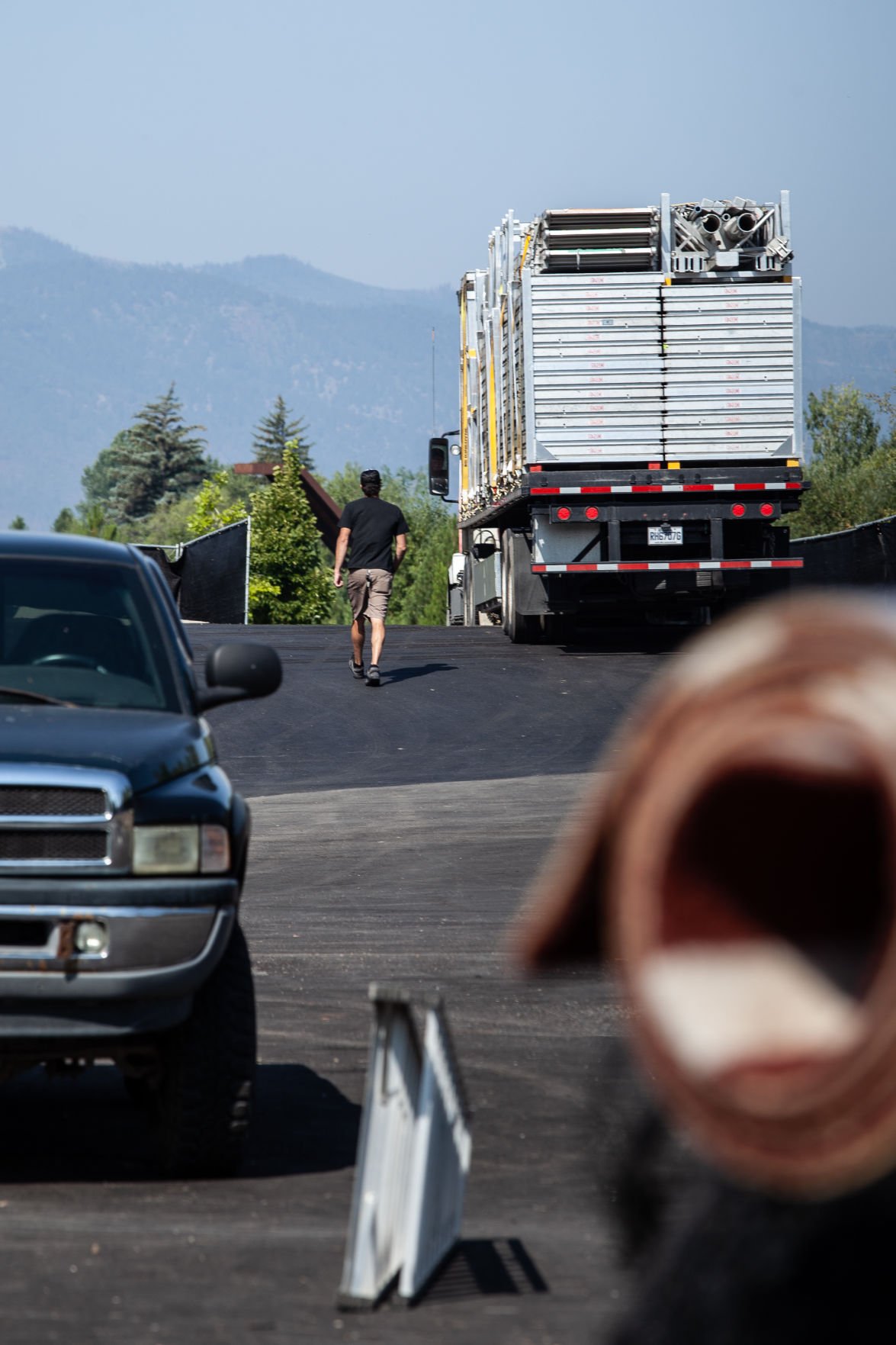 A semi-truck carrying stage pieces uses of the newly paved ramp behind Ogren Park. The ramp was part of around $150,000 of upgrades Logjam funded so concerts of this size could be held.

Sunday's Mumford & Sons show, which features an arena-level band and 13,500 tickets sold, is a test run of sorts for next year, when Logjam Presents plans on scheduling three to five such concerts at Ogren Park.

“This is not what you’ve seen in Ogren,” Logjam owner Nick Checota said Wednesday during a tour of the facility. “You could put this (show) in Washington-Grizzly stadium.”

Mumford & Sons are on a U.S. tour playing arenas that are up to triple the size of Ogren Park, with a handful of smaller amphitheaters and stadiums that top out around 18,000 people.

That makes Ogren the smallest stop by far, Checota said.

Logjam, as part of its 10-year agreement with the city and Ogren Park, put about $150,000 worth of improvements into the stadium, including paving the loading dock, installing a second 32-foot gate in the back of the stadium and adding additional power shores to pump electricity to the 10 tour buses, mobile offices, kitchens and the stage.

There will be a mobile kitchen in the parking lot, built to serve six meals to around 80 tour staff, as well as facilities for the band’s private chef.

Logjam shipped in three semi-trailers full of plastic floor tiling that will lie over the baseball outfield, to protect the grass and allow the tour trucks to drive into the stadium to unload the stage, with accompanying video screens.

Groundskeeper Trey Eure, who was packing up the Osprey batting cages to clear room for the concert setup on Wednesday, said the main difference from past concerts, aside from the scale, is that Logjam is handling so much more of the work.

“That takes a lot off our shoulders, as far as setup,” Eure said. “Definitely there’s more production involved.”

Eure was unfazed thinking to next year, or the year after, where there might be three, four or five concerts of this size at the stadium.

The concert sold out its 13,500-person capacity, Checota said. Logjam assumes 10% of ticket buyers won’t show up, meaning they should have around 12,000 people packed into Ogren Park.

The last sell-out show at Ogren Park was Paul Simon in 2017 that sold 8,000 tickets, according to a Missoulian article from the day after the concert.

Without all of the improvements, Checota said, “you could have never done a show like this.”

Logjam is expanding to four gate entrances, including the main gate, two gates on the left and right of the upper level, and the southside ramp gate near the railroad tracks.

The two outfield gates will be available as emergency exits, he said, but otherwise are only for production staff.

Bathrooms, drink tents and food vendors will be stationed around the edges of the field, with a thought to giving those in the stadium seats as good of an experience as those standing in the outfield.

“A lot of thought was given to capacity and not blocking sightlines,” Checota said.

There’s a lot of planning as well that goes into funneling the 12,000-or-so people into the stadium. Wyoming Street will be closed to nonresident traffic, and Logjam is encouraging biking and walking from free parking downtown.

The Sawmill District is hosting food trucks in the lot next to Silver Park as well, giving a “festival atmosphere” for concert attendees.

But it all adds up to one of the more unusual concert venues on the Mumford & Sons tour, which surely drew those outside Missoula to buy tickets.

Checota said that around half of all the tickets sold were sold to people with ZIP codes from more than 250 miles away.

“I think this year we’re really learning how much Missoula can absorb,” he said.

That’s a trend across all of the Logjam venues, Checota added, with around 40% of all tickets sold to people outside that 250-mile circle.

Mumford & Sons should have a unique concert experience here, he said.

“Missoula’s a little different than other places,” Checota said. “It’s a rowdy, loud crowd that’s gonna get super-excited about their music.”

Here's a basic rundown of what you need to know if you're going to the Mumford & Sons show Sunday at Ogren Park. All information is from Logjam Presents, and detailed maps, graphics and an FAQ can be found by navigating to the info button for the show at logjampresents.com.

Most if not all of this info is being sent directly to ticketholders' email as well.

11 a.m. – Ticketing/Information booth opens at the Top Hat to assist with any ticketing questions (Directions)

The Ogren Park/Silver Park parking lots will be closed to vehicles on Aug. 10 and 11. Bicycles and pedestrians can still use the area.

As of Wednesday, the National Weather Service predicted a high of 73 degrees on Sunday, with a 60 percent chance of rain.