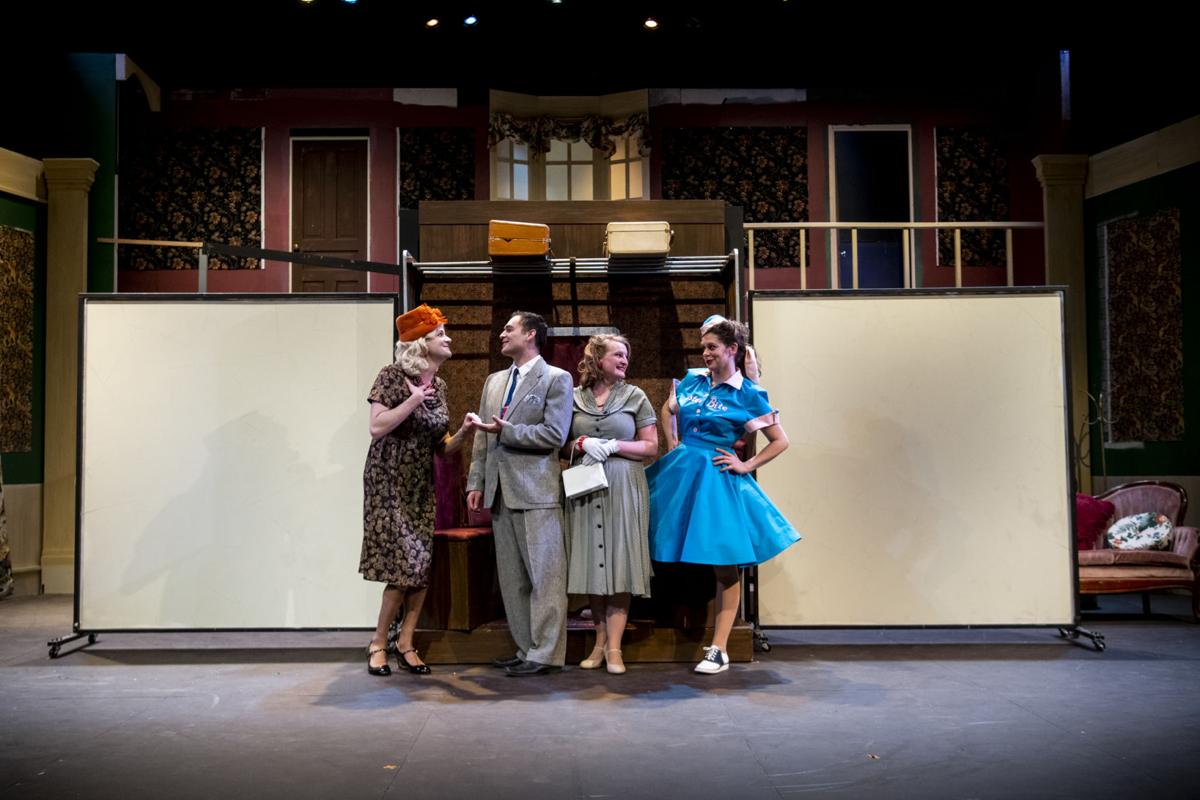 From left: Brennan Buhl, Zach French, Bridget Smith and Anna Loehrke rehearse for a performance of "Leading Ladies" at the MCT Center for the Performing Arts last week. The Ken Ludwig comedic farce premieres Jan. 23 and runs through Feb. 2. 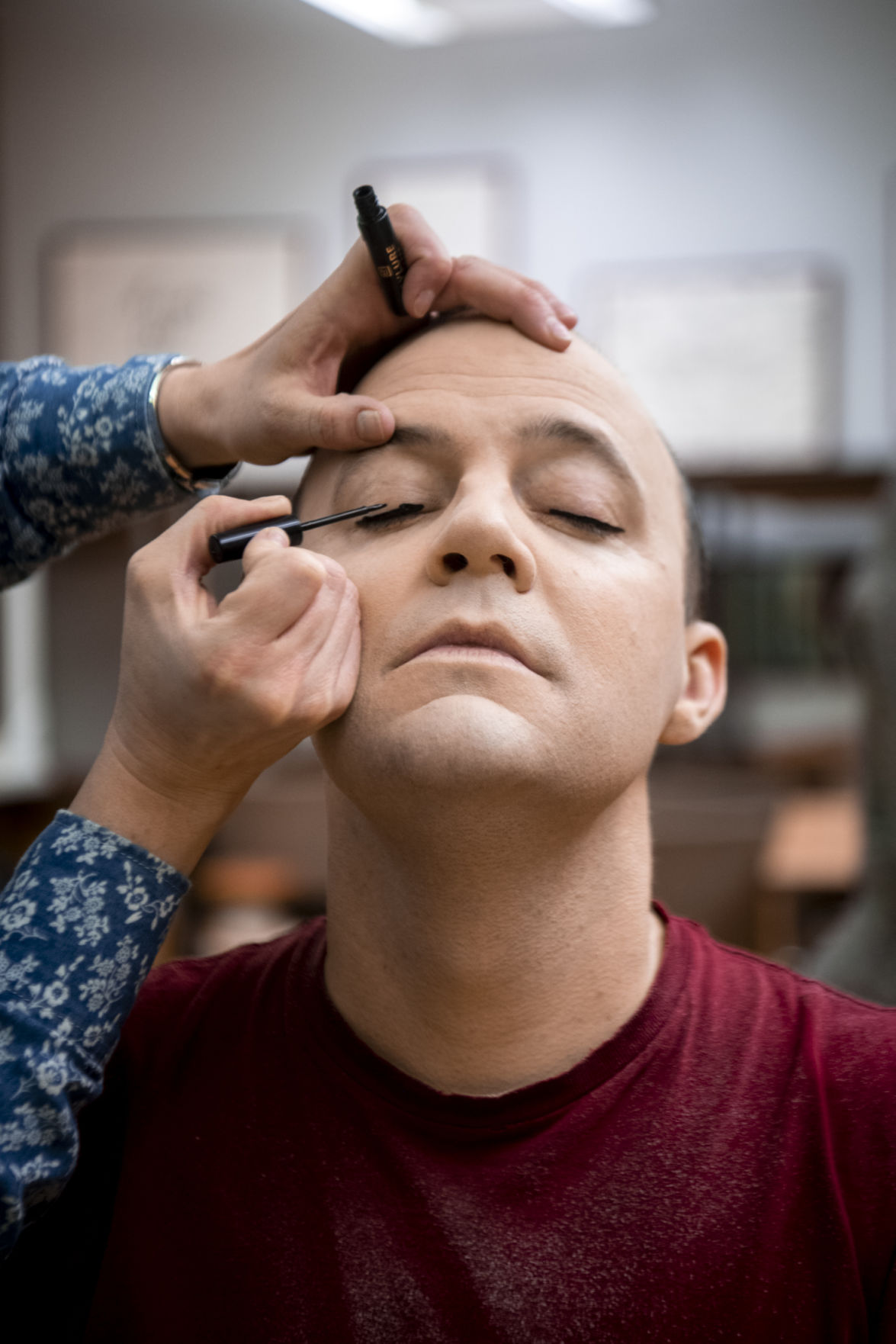 Brennan Buhl puts the final touches on his costume before a rehearsal for "Leading Ladies." Buhl said it's the first time he's played a woman and the most extensive makeup and costume work he's been involved in. 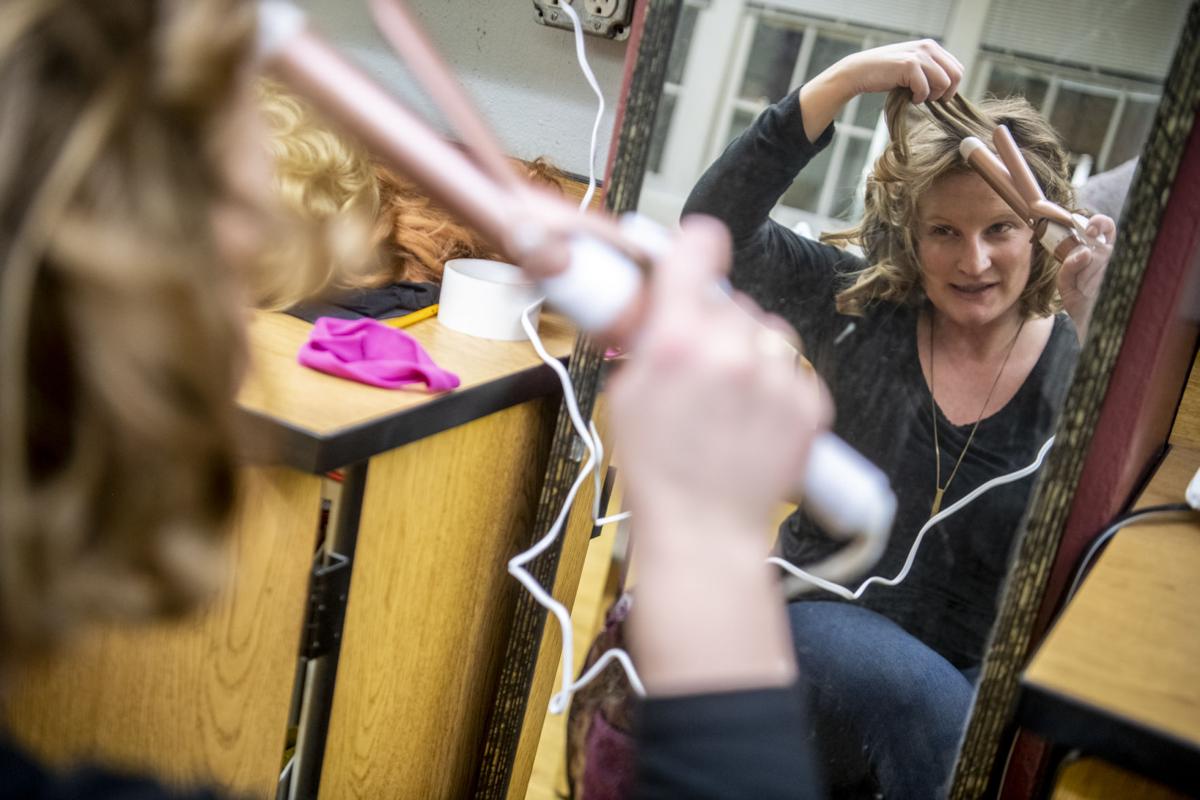 Bridget Smith curls her hair before heading on stage for a rehearsal of "Leading Ladies."

From left: Brennan Buhl, Zach French, Bridget Smith and Anna Loehrke rehearse for a performance of "Leading Ladies" at the MCT Center for the Performing Arts last week. The Ken Ludwig comedic farce premieres Jan. 23 and runs through Feb. 2.

Brennan Buhl puts the final touches on his costume before a rehearsal for "Leading Ladies." Buhl said it's the first time he's played a woman and the most extensive makeup and costume work he's been involved in.

Bridget Smith curls her hair before heading on stage for a rehearsal of "Leading Ladies."

Missoula Community Theatre is filling Montana’s long, cold winter with laughter and love and taking a look back at gender identity in its upcoming production of Ken Ludwig’s comedic farce “Leading Ladies.”

Set for Jan. 23-Feb. 3, the play tells a story of romance, triumph and finding ourselves to a backdrop of big belly laughs and fun, said director Rosie Seitz Ayers.

“Leading Ladies” follows Meg, a young woman living in York, Pennsylvania, in 1958 as she cares for her dying, wealthy aunt Florence and dreams of life outside of her small town. She meets two down-and-out Shakespearean actors, Leo and Jack, who are masquerading as her cousins, Maxine and Stephanie, in the hopes of inheriting Florence’s fortune.

“And the farce ensues,” Ayers said. “In and out of doors and fish flying across stage and all that good stuff.”

Ludwig’s writing is known for its fast pace, flamboyant characters and clever shenanigans of mistaken identity, and “Leading Ladies” has it all.

With a background in improv and standup comedy, Ayers was immediately on board to direct the play after being asked by MCT artistic director Joe Martinez.

“I do gravitate more towards comedies, particularly dark comedies, especially in the winter in Montana,” Ayers said, adding she was also attracted to the time period. “It’s set in 1958, which is a glorious time period — the costumes, the music, the cocktails — all that stuff we get to really bubble about.”

The cast has also been exploring some of the play’s themes surrounding gender identity and norms and how they’ve changed since the 1950s and even the early 2000s when the piece was written.

“This very much does address the idea of, what were some of the struggles, as far as being a woman? What kind of voice did you have in 1958 compared to what you have now? And it’s quite interesting to me that we’re looking at it from that point of view,” Ayers said.

The production is all-inclusive and casting the roles of Leo/Maxine and Jack/Stephanie was less about if a man could play a woman and more about who could play two distinct characters, Ayers said.

“We live in a much more non-binary world, so even those ideas of what is feminine and what is masculine has really drastically changed. So it really was about finding people who could inhabit two very different characters within the same body.”

Brennan Buhl was not familiar with “Leading Ladies” when he saw the call for auditions, but with an affinity for comedy, he decided he’d throw his hat in the ring. He ended up with the role of Leo/Maxine, and the challenge of playing two personas in one show.

“My guy Leo reads a story about this dying woman who’s searching for her long-lost nephews, he thinks, to give them a ton of money,” Buhl said, adding he and his partner in crime, Jack, devise a plan to present themselves as said nephews. “It all falls apart rather quickly because they learn that they’re not nephews, they’re nieces.”

Never having played a woman before, Buhl said it was a fun challenge to take on, adding this role has required the most extensive makeup and costume work he’s ever been a part of.

“It’s interesting to put on these things I’ve never had on and suddenly you’re like, ‘Oh!’ It encourages you to move in this way and suddenly other humans make more sense to you, which is sort of the point of theater, and it’s a nice little side effect of doing a farce,” he said. “So you also come away with more respect for more people, which is always good.”

Buhl even lost his voice trying to find the right one for Maxine, adding fellow cast member Zach French, who plays Jack/Stephanie, had his mastered from the start.

“Zach is quite skilled at properly using his voice and body and supporting as he tries to use this high-pitched feminine voice. You can hear he’s doing it properly from his diaphragm,” Buhl said. “As soon as I step out there I just start screaming in falsetto, and so it wasn’t a surprise that my voice went away.”

Meg is played by Bridget Smith, and Ayers touted the chemistry between her and Buhl, whose characters eventually fall in love.

“Her giggle and Brennan’s bumbling together make for the greatest love story that I have seen on stage in a long time.”

Ayers and Buhl said the cast wanted to be sensitive to the fact that times have changed since the 1950s and even since the play was written 20 years ago, and what may have been funny then isn’t funny today.

“I think it’s safe to say that in the ‘old days,’ (a man wearing a dress) was a punchline, but Rosie has done a really great job of making sure that’s not the punch line, because it isn’t anymore,” Buhl said. “We have a better understanding of the different lives of different people.”

Calling it a high-brow comedy and intellectually stimulating, Ayers said Ludwig was intelligent enough to write smart jokes, rather than joking at the expense of others.

“The most hilarious parts of this come from the conflict between the characters and the places where they really relate to each other,” Ayers said. “It truly is an interesting study in looking at gender identification of the past, looking at how it has even evolved in the last 10 years and how our current society look at it through this lens of the arts and theater.”

Both Buhl and Ayers said the cast has been laughing their way through rehearsals and hope the audience finds the show just as hilarious and fun as they have.

“Everyone in the community, people coming to watch this show, especially in the winter, they need a place to have a break from their grief that might be going on in their life, their challenges, the things bringing them down,” Buhl said. “And to get together in that big room and have everyone laugh together is so special.”

For more information and to purchase tickets, visit https://mctinc.org/.