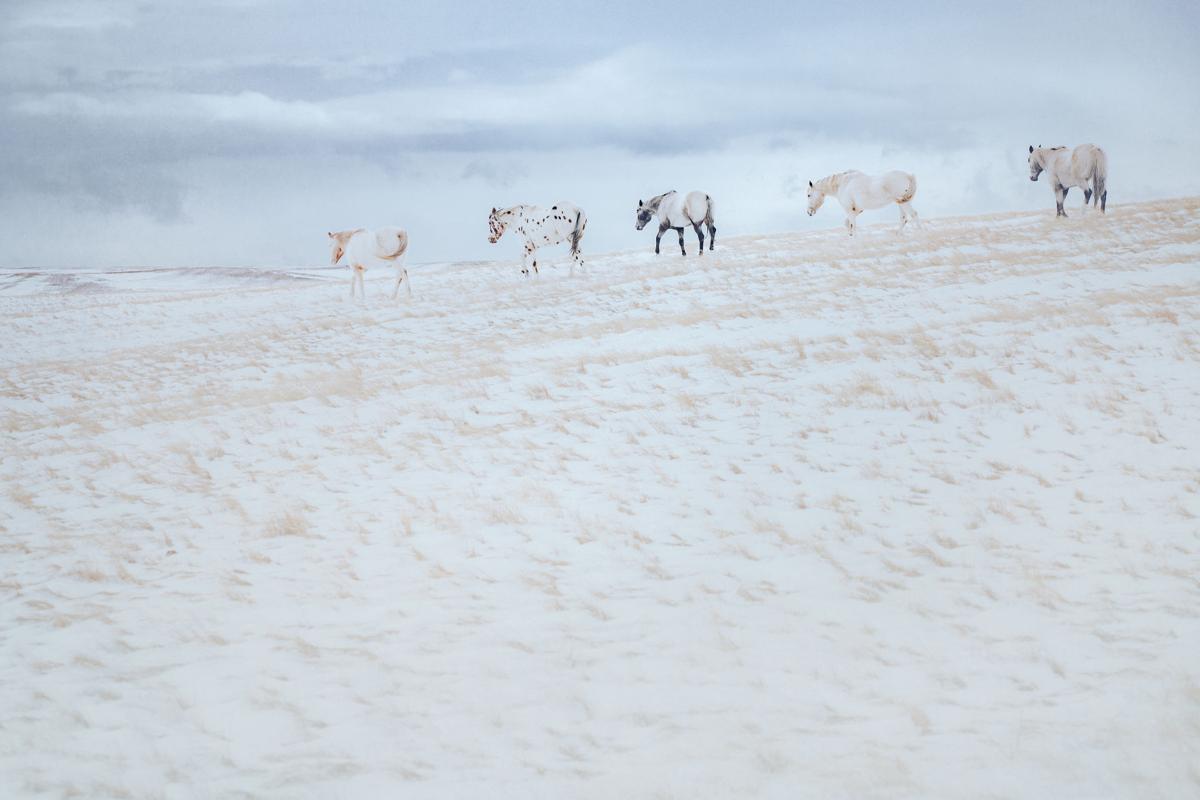 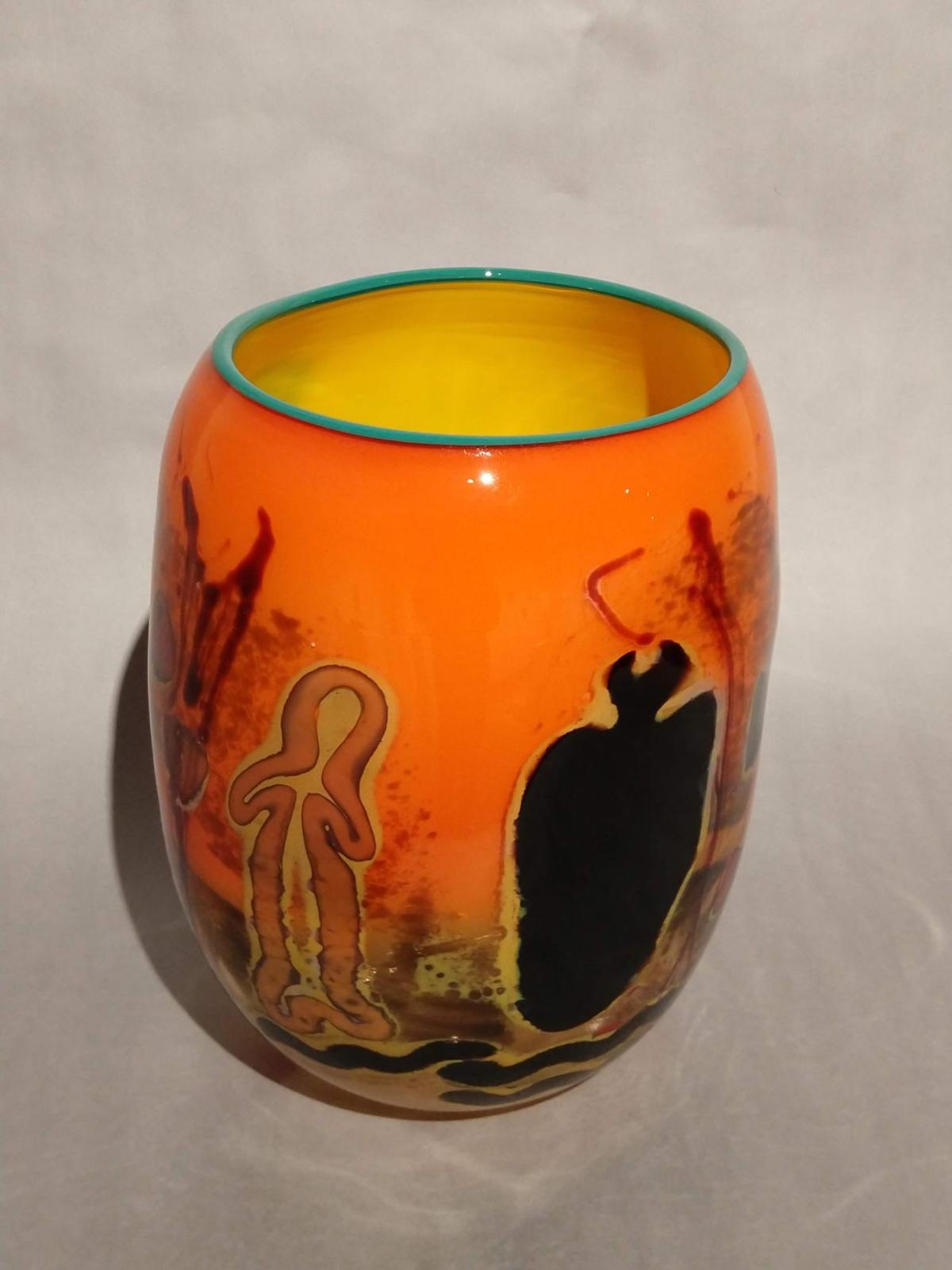 Lillian Pitt's "Gathering of the Shadow Spirits" (blown glass, 12 by 9 inches) sold for $4,250 during the live auction. Her exhibition, "Honoring My Ancestors," has been on view at the MAM since September. 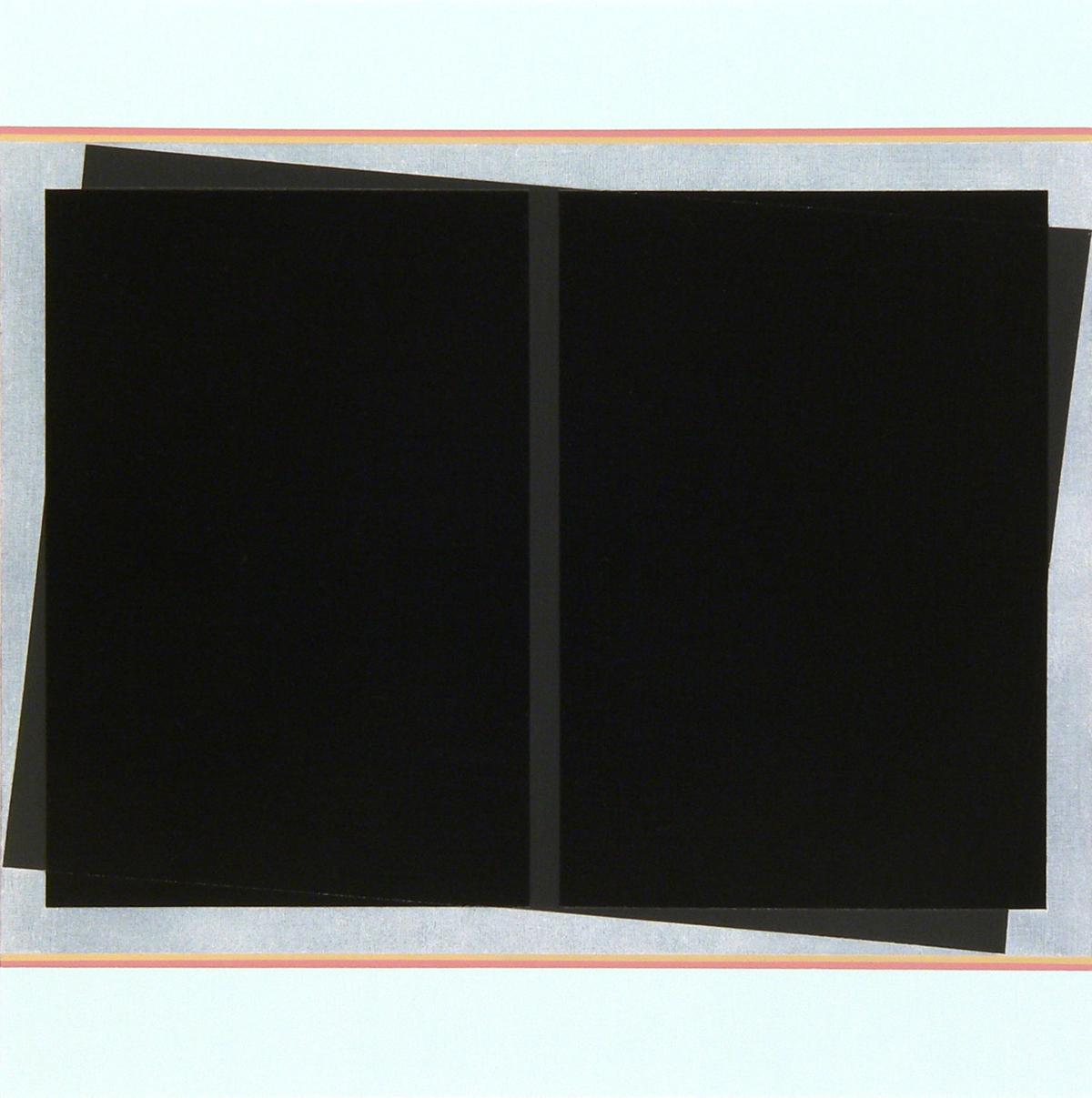 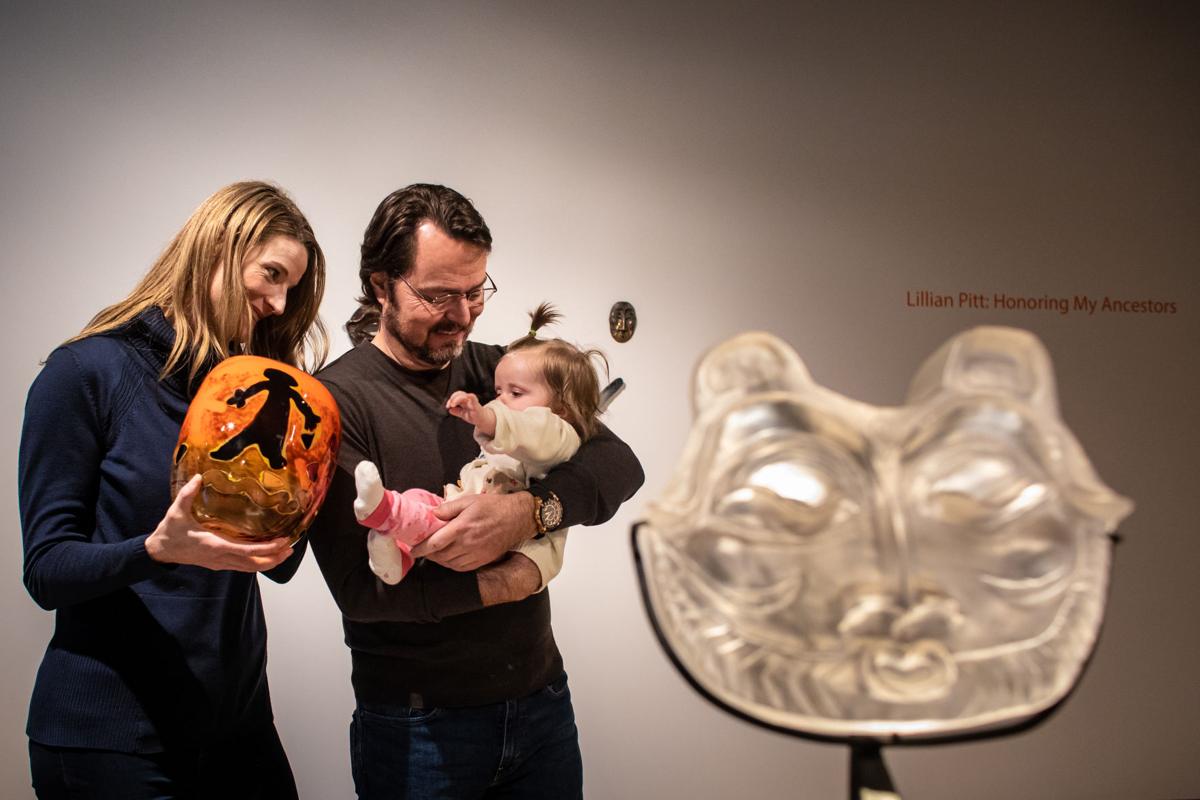 Emily Brock, left, and Matt Gibson, with their daughter Charlotte, stand among artworks from Lillian Pitt at the Missoula Art Museum. Brock and Gibson hold Pitt's piece, "Gathering of Shadow Spirits," which they purchased at the MAM's annual auction last weekend. The auction helped Pitt, an artist from Oregon, gain exposure for her artwork.

Lillian Pitt's "Gathering of the Shadow Spirits" (blown glass, 12 by 9 inches) sold for $4,250 during the live auction. Her exhibition, "Honoring My Ancestors," has been on view at the MAM since September.

Emily Brock, left, and Matt Gibson, with their daughter Charlotte, stand among artworks from Lillian Pitt at the Missoula Art Museum. Brock and Gibson hold Pitt's piece, "Gathering of Shadow Spirits," which they purchased at the MAM's annual auction last weekend. The auction helped Pitt, an artist from Oregon, gain exposure for her artwork.

There are two parts to the Missoula Art Museum's Benefit Art Auction: The pieces auctioned by a professional, live on stage, and the silent portion, which lines the walls of the University Center Ballroom each year.

Last Saturday in the University Center Ballroom, the MAM tested an online silent auction for the first time. Participants, whether in the room or bidding off-site, could stay in the game on their phones or even set an automatic maximum bid and let the app do the work. The MAM hoped that the move would help sell more pieces in the midst of the event, when an auctioneer, dinner and drinks are all competing for attention.

"Our goal is to sell all the work that is accepted and sell it as well as we can, and with the live auction we have the auctioneer really working to make that happen," said Laura Millin, MAM's executive director. In years past, with the silent auction, "we haven't had the push, the competitiveness and the energy around it, to make sure that happens."

The final numbers indicate that the digital bidding, made through a service called Givergy, worked.

After expenses, the auction brought in $130,000, including $45,000 raised during the "moment of giving," in which attendees are encouraged to donate directly. Last year's haul was about $215,000. A significant matching grant for the "moment of giving" accounts for the difference. In 2019, the Drollinger Family Foundation donated $60,000 after the crowd met and then exceeded the stated target, with $64,075.

The money raised comes not only from the auctioning of the art, but a wine wall, ticket sales, and sponsorships.

Only a small portion of the silent auction of 39 pieces sold below the listed value. Some pieces greatly exceeded it. "Montana Gait," by Missoula photographer Erika Peterman, is valued at $800 and sold for $2,250. "Colstrip 1 2 3 4," a nighttime photograph of the coal plants by David Spear of the Flathead Reservation, had a listed value of $250 and sold for $497.

In the live auction of 34 pieces, among the most successful was Brooklyn painter Don Voisine's geometric abstract oil, "Spun." It sold for $4,700, with a stated value of $4,000 at a 100 percent donation. Oregon artist Lillian Pitt's blown glass vessel, "Gathering of the Shadow Spirits," sold for $4,250, with a listed value of $3,000. Pitt, an indigenous artist with heritage in the Warm Springs, Wasco (Watalas) and Yakama (Wishxam) people from the Northwest, has been exhibiting work at the MAM since September.

The art is selected by a jury, based on the quality of the pieces and the artist's reputation that fit with its mission to promote contemporary art. It's always an open question whether a piece from a popular exhibiting artist will sell, or whether a piece from an artist who sold well in years past will repeat again.

"We can't predict the commercial art market," said associate curator John Calsbeek. "That's not what we do. It's the opposite of what we do."

The auction is the largest fundraiser of the year for the accredited nonprofit museum, and goes toward its programming and keeping its admission free.

Millin said they've been considering the online move for several years now, one that they say was inevitable. After talking with other local organizations who've already made the change, they were told that they might hear some complaints but overall would raise more money, Calsbeek said.

Auctions are a balancing act, with the live and silent portions sometimes competing with each other. For instance, if the auctioneer has to stop the event to remind people that a silent section is going to close, people then get up to move to another part of the room to check.

Selling pieces live "relies so much on momentum and atmosphere and excitement and a sense of conviviality, and so as soon as you stop that you have to build it up again," said senior curator Brandon Reintjes.

With the Givergy app, if someone outbid you, you would be notified via text and prompted to bid again if you wished. There was a small glitch, where that led to a dead link and you had to go back to the main auction page.

They'll likely have online bidding in the silent auction next year, with some changes. This year, one section of 12 pieces went up for bid at the start of January when the auction works were unveiled at the MAM and stayed on view for a month. That section closed before auction night, and some works that didn't sell were moved to the auction night. Millin said that's likely a matter of marketing, since it's a new feature.

On auction night itself, Millin said they held the crowd until the end, which came right as promoted at 9:30 p.m. Jay Schmidt and Steve Glueckert's sculptural pieces, which ended the night, both sold at or above value.

"We held the crowd better than ever," Millin said.

Missoula Symphony Orchestra and Chorale will stick together for Holiday Pops