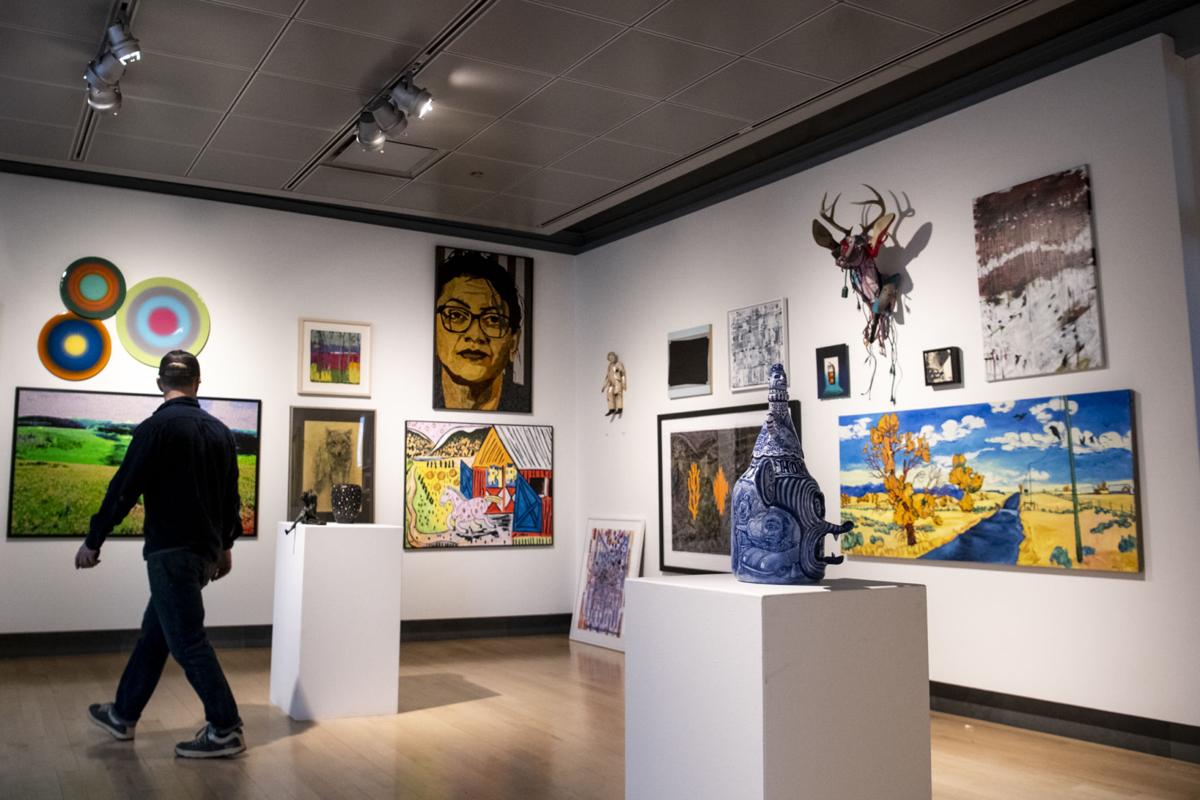 The Missoula Art Museum will host a silent auction online for portions of this year's Benefit Art Auction beginning Friday. The MAM hopes to "open the bidding to the world, to bidders anywhere," said Laura Millin, the MAM's executive director. 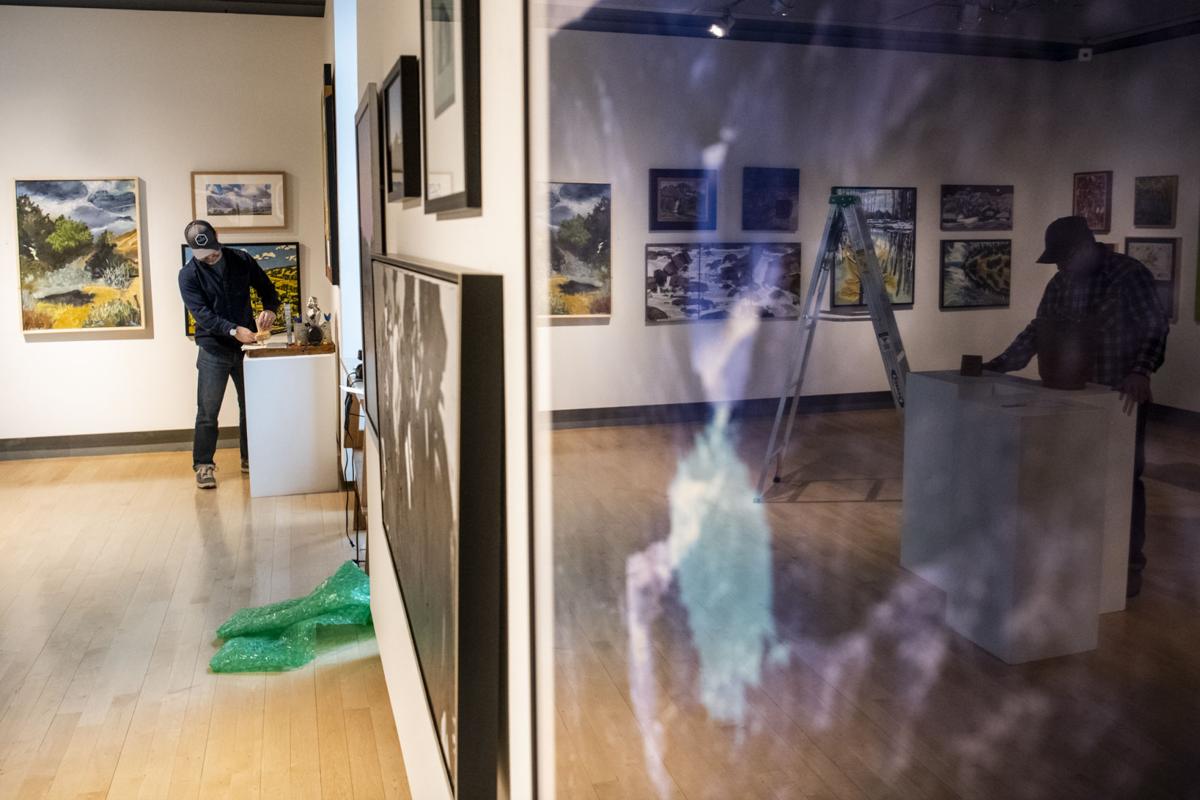 “A Drawing Machine with George,” is an automatic drawing sculpture made by Stephen Glueckert, a retired MAM curator.

The Missoula Art Museum will host a silent auction online for portions of this year's Benefit Art Auction beginning Friday. The MAM hopes to "open the bidding to the world, to bidders anywhere," said Laura Millin, the MAM's executive director.

“A Drawing Machine with George,” is an automatic drawing sculpture made by Stephen Glueckert, a retired MAM curator.

The Missoula Art Museum is going digital for parts of its Benefit Art Auction.

By running the silent auction portion online, the MAM hopes to "open the bidding to the world, to bidders anywhere," said Laura Millin, the MAM's executive director. She noticed other organizations she follows have tried similar formats at their fundraisers, and thought it presented new angles for the MAM to broaden its audience and generate more interest.

The auction, now in its 48th year, is the accredited, nonprofit museum's major fundraiser of the year. Last year, it set a record high of about $218,000 for its programming, including free admission and its Fifth Grade Art Experience.

The line-up for this year's auction includes well-known local, regional and national artists, and they stacked the first online silent auction with many annual favorites like Gigi Don Diego, Dudley Dana and Nancy Erickson.

"We hope that by doing this early, it's going to teach people about the online platform. It gives them a chance to experiment with it in a less frenzied environment," said Brandon Reintjes, senior curator.

"We selected pieces that we thought were of special interest that we thought could bear the scrutiny of that extra attention and then teach the community how to work with that online platform."

When the exhibition opens at the MAM this Friday, people can begin placing bids on the first round of silent auction items online.

The second two rounds of the silent auction open on auction night on Feb. 1. Those, too, are open to online bidding to people in attendance or not. There's also an option to set a maximum bid, so hopeful buyers won't have to continuously monitor a paper bid sheet and have more time to socialize.

The MAM hopes this system moves things along more quickly on auction night and the live auction can start earlier, while giving each piece more attention.

In total, the silent auction features 36 pieces and the live auction has 34. The works range from abstract paintings to landscapes to something in between, and the same for photography, sculpture and mixed media. They range in price from an estimated value of a few hundred dollars to a $9,000 allegorical ceramic sculpture by Adrian Arleo.

Besides veteran participants, there are new artists, too. Jesse Blumenthal, a recent University of Montana MFA graduate and metal sculptor, has organized community iron pours at Free Cycles community bike shop. He also constructs sculptures from a variety of materials. His "Community Radio Outlet #2" is a functioning radio built from electronic parts, a steel frame and a glass box with what looks like a vase acting as a speaker horn.

Photography is represented, too, and some of it in unexpected ways. Susan Moldenhauer, a retired curator from the University of Wyoming Art Museum, donated a print from a recent series. "Home of the Big Cone, Farson, Wyoming," is a smart phone panorama shot while driving through a small town. While riding in the passenger seat, Moldenhauer takes advantage of the digital glitches that occur when the panorama mode is used at high speed. Among the fragments of buildings, you can see the storefront of the Farson Mercantile, "home of the big cone," per its sign, as well as a customer leaving with one.

"I love the way she's stitching together the Western landscape," Reintjes said, and it represents a "contemporary take on landscape photography."

There's a fair amount of artists who either had exhibitions at the MAM recently or will in the future.

Arleo, Richard Notkin, Jay Schmidt all participated in "In Praise of Folly: Five Artists After Philip Guston," in which they created response pieces to a work by the influential painter.

John Buck, who made a sculpture for that show, donated a large woodblock print, "Border Lands," that sets wall and conflict imagery behind a set of three orange emblems.

Linda Thompson, a former Missoulian photographer, submitted a photograph of Lower Falls in Yellowstone National Park, with vintage looking wear-and-tear and a large icon-like splotch of aquamarine. While it appears to be an intentional accent, that splash of color is water damage on a family picture, a theme in her show, "Emigrant Memoir." Ken Little donated a pop art-style "deer mount" constructed from leather, shoes and other found objects in bright pink and blue, from his show of this series, "Trophy Room." Lillian Pitt, a Wasco and Yakama artist who has an exhibition up, gave a blown glass sculpture emblazoned with traditional imagery, that the MAM expects will go quickly.

Stephen Braun, a raku-kiln ceramic artist from Whitefish, has a large solo exhibition coming up in March. "Hindsight is 20/20" will be interactive, with shades of his activist and political passions. According to the MAM's description, this will include pieces that "spin" and ones that you can walk on.

Gordon McConnell, a former curator at the Yellowstone Art Museum, donated a large monochrome acrylic similar to work in his traveling museum show, "When the West Was Won," that opens here in February.

As a whole, Reintjes said artists are donating major works, some at up to 100 percent donations.

"With all these artists and all these pieces, I feel like they're contributing their best work that's most significant to them as an artist to represent who they are and what their artistic identity is," he said.

The Missoula Art Museum's 48th Benefit Art Auction Exhibition opens on First Friday, Jan. 3. The auction is Saturday, Feb. 1, in the University Center Ballroom at the University of Montana. Tickets are available through missoulaartmuseum.org. They cost $150 for non-members, $100 for members, and $1,000 for a prepaid table for 10.

How to bid online

You can register and bid on silent auction items online this year, some before and some during the event itself. Go to givergy.us/mamauction to sign up and follow the instructions.

At the auction, bid on 37 items starting at 5 p.m. The second round closes at 7:45 p.m. and the third closes at 8:45 p.m. You can bid online and set a "maximum bid" option that will automatically bid for you so you don't have to monitor a paper bidding sheet.

Arts in Missoula: Gaming fundraiser, Pop Up Film Festival and a Wassail workshop