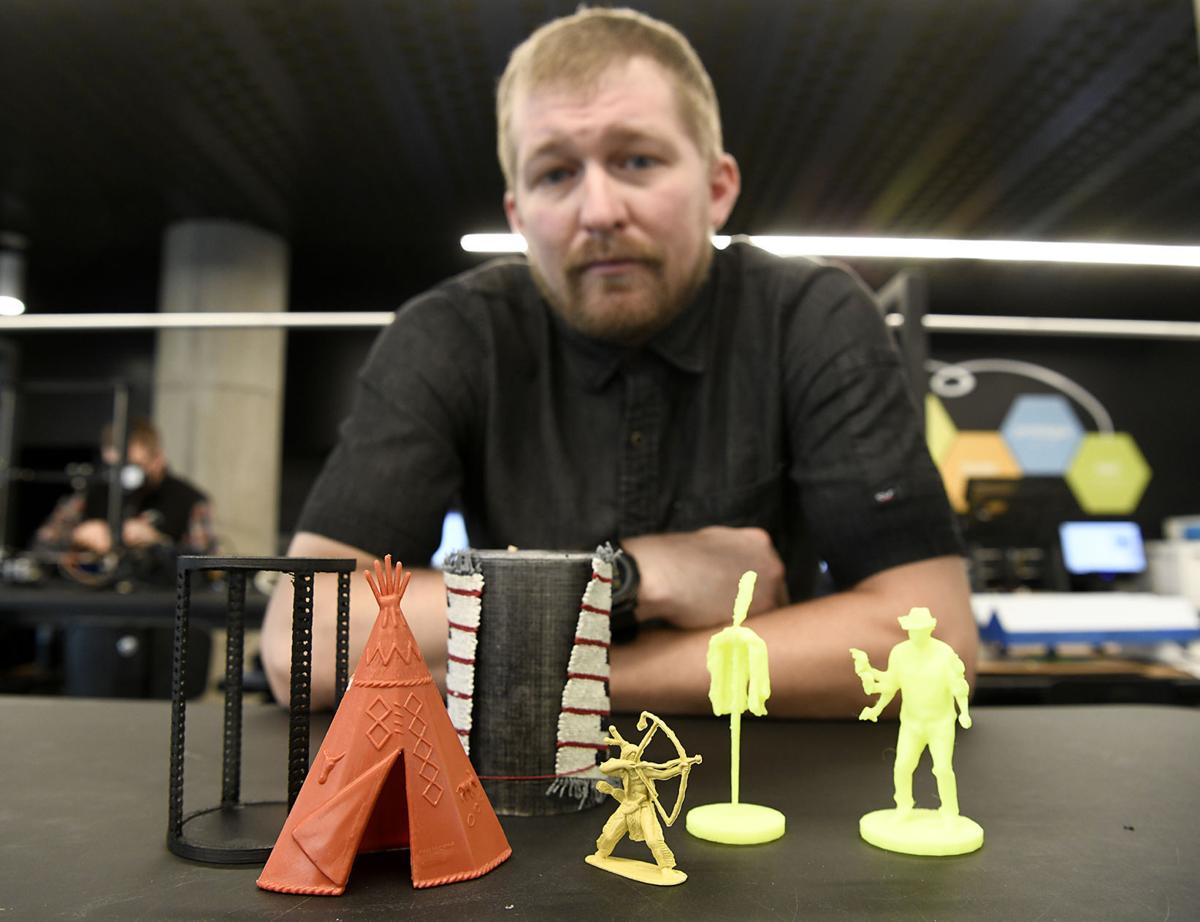 Quinton Decker has been creating projects that relate to the representation of Indigenous people in movies and television. 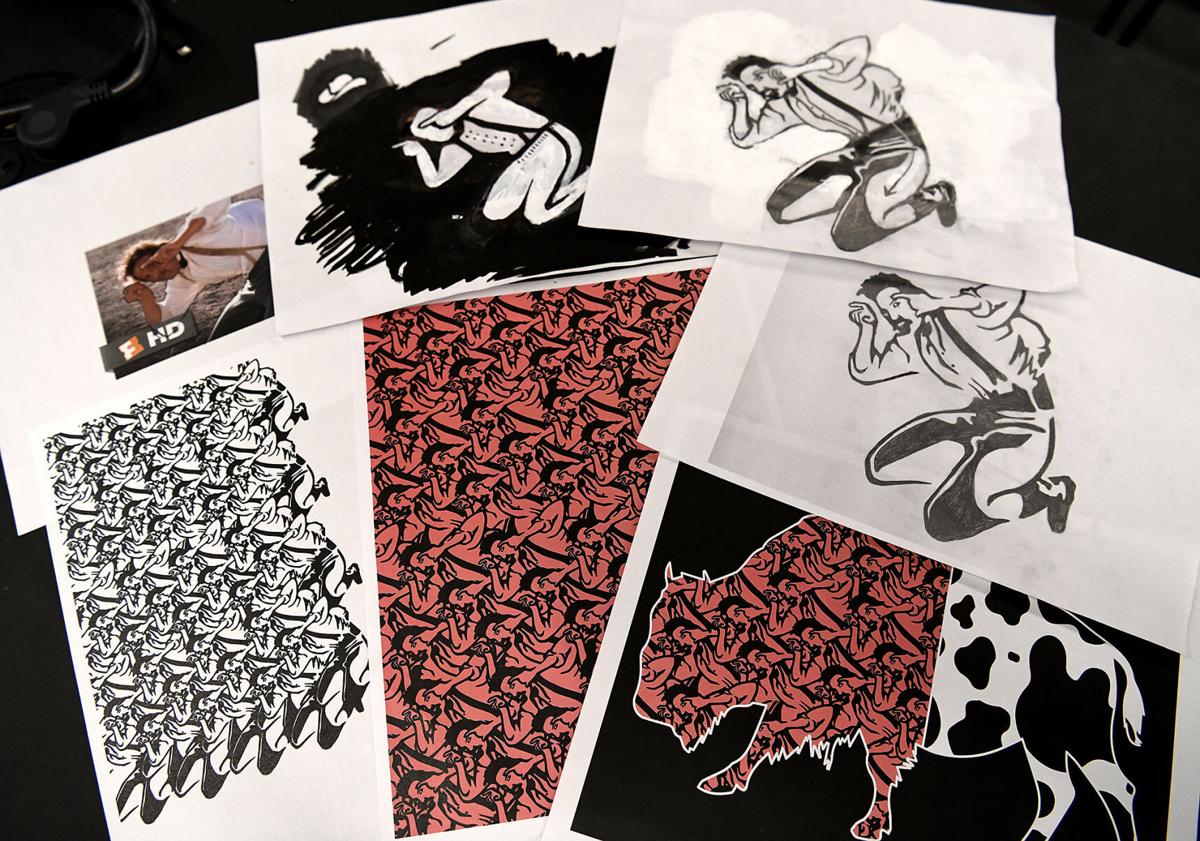 Decker is manipulating images from popular culture, such as an image taken from the movie "Dances with Wolves."

Quinton Decker has been creating projects that relate to the representation of Indigenous people in movies and television.

Decker is manipulating images from popular culture, such as an image taken from the movie "Dances with Wolves."

For Quinton Decker, the last several weeks have been permission to experiment.

The Missoula artist has been working in the Missoula Public Library’s MakerSpace, equipped with 3D printers and other tools, through the Open AIR artist residency program, a nonprofit that places artists in locations around western Montana and access to their spaces and resources.

It also carves out time (there’s a stipend), which is key for artists.

Decker studied art at the University of Montana, graduating in 2018 with a bachelor of fine arts degree and an emphasis in ceramics. Once he was done, though, he didn’t have easy access to a kiln anymore.

“I shifted into painting, because it was just accessible and I could do it at home,” he said.

He applied for the library because of the MakerSpace and its 3D printers. He’s become more interested in weaving and the potential for custom-designed frames, “trying to pull weaving from a more traditional context and pull in material that’s modern.”

Decker, an enrolled member of the Navajo Nation with Salish descent, sees potential for a conversation between the materials, like how the influential Colville artist Joe Feddersen has brought Indigenous imagery into glass, a nontraditional material.

Decker’s been mocking up cylindrical frames that could support a woven surface wrapped all the way around them. Using CAD software, he designed holes through the frame to support it to create a tight surface, rather than the loose one you would achieve if you wove a piece separately and then tried to attach it to a surface.

Regarding time to work, Decker, like many artists, said that it’s always challenging — he has a job in the service industry, for instance, which has been more demanding since the pandemic due to staffing shortages. With the residency, he’s able to have a routine of coming in from 11 a.m. onward Monday through Wednesdays, with access to all its new tools.

Decker has also been working on 2D and 3D projects that relate to representation of Indigenous people in movies and television.

Some involve mixing old plastic figures with custom, 3D-printed ones. It would bring them into a “modern context, where these toys present an idea of the past.” They could potentially be placed with a diorama, perhaps recreating scenes from “romanticized Western contexts like Charlie Russell.”

For instance, there’s a teepee that he wants to augment by placing a satellite dish on the exterior, to “give it the sense that Native people still exist, but it’s not the way that this toy presents it,” he said.

Another figure he made is of a cowboy, standing in a duel stance, with guns drawn in each of his six arms. The unrealistic addition of six arms is a way of exploring the myths of the past, such as the lone cowboy trope.

He and Ira Sather-Olson, the senior MakerSpace associate, made it with a 3D scanner by a company called Occipital that wirelessly connects to an iPad, along with a program called Skanect. Decker posed as the model, and Sather-Olson scanned him, moving around multiple times. Then you can edit out any extra data (such as, say, the floor) and in this case, add extra data (multiplying the arms) and export it to the 3D printer.

It doesn’t pick up a tremendous amount of detail on faces, for instance, Sather-Olson said, but for the purposes of art projects has been useful.

One piece relates to Disney’s “Pocahontas,” and an early scene in which they’re sailing to America and talking about what they’re going to encounter. "They paint this really ugly picture of Native American people, and they parade this mop around, with a feather, and then they chop it off,” he said.

Using the 3D printer, they made a mop in the style of an old plastic toy, the kind he grew up with, and wants to incorporate the imagery.

He’s been working on 2D imagery as well, one of which is based on Kevin Costner’s “Dances with Wolves.” His lieutenant is trying to communicate with the Sioux, and impersonates a bison by positioning his fingers next to his temples like horns.

“He's imitating the very thing that he ends up ultimately wiping out, or at least what colonizing has done,” he said.

Decker painted, then began manipulating the image on the Cricut stencil maker to create “a herd of Kevin Costners.” It’s gone through iterations, such as one that uses a bison with Costner images and cow spots (an allusion to the genetic makeup of current herds).

In another version, he’s divided the bison like a map with borders, which he thinks could be an interesting conversation about reservations and divisions.

“I feel like it’s getting somewhere the more I keep working,” he said.