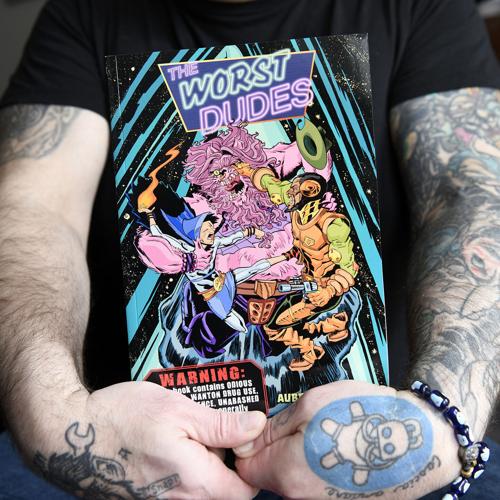 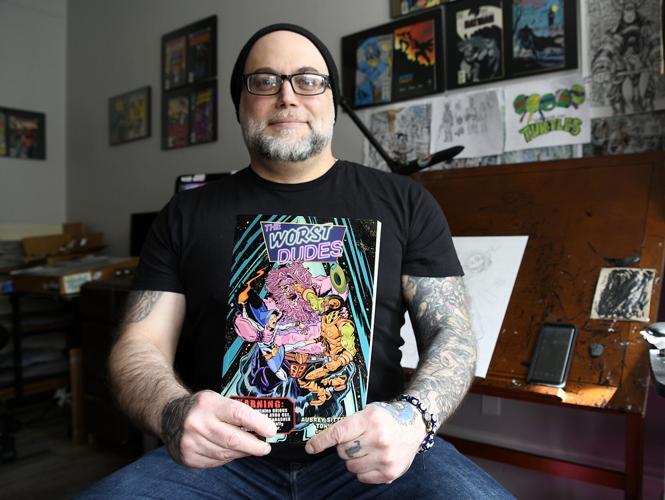 Local comic artist Tony Gregori recently completed a run for a comic book series called "The Worst Dudes," which is out now on Dark Horse. 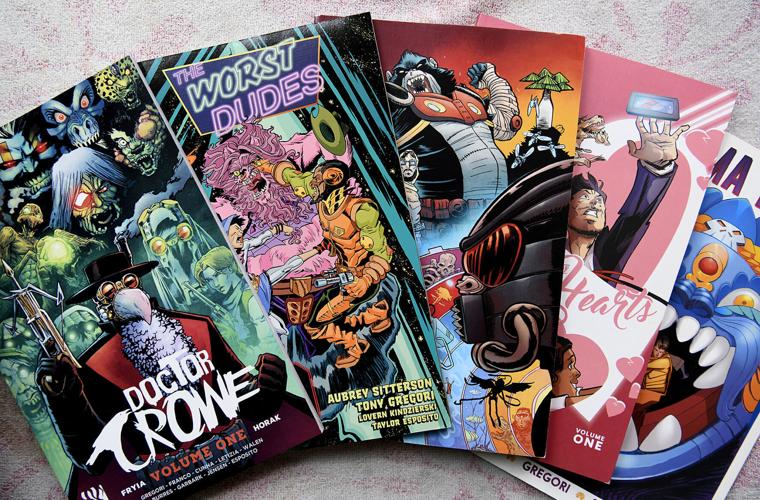 Gregori has worked on comics for indie publishers including Vault, which started here in Missoula.

Local comic artist Tony Gregori recently completed a run for a comic book series called "The Worst Dudes," which is out now on Dark Horse.

Gregori has worked on comics for indie publishers including Vault, which started here in Missoula.

Tony Gregori is a local comic artist who has been drawing professionally for over a decade. Gregori recently completed a mini-run for a crass, wild and weird comic book series called “The Worst Dudes,” which he completed with writer Aubrey Sitterson and was published earlier in 2022. Gregori is also now working on some of the most popular comic book series of all time, and just finished drawing “Teenage Mutant Ninja Turtles” when we met this past April. After putting in 20 10-plus-hour days to complete the book and get it to his publisher he was understandably tired but gracious enough to chat about his work, biography and what it’s like to write and create comics in a world whose pop culture is ever more shaped by comic books.

How did you get into your current line of work as the guy who draws panels in comic books for a living?

Well, back when I was first starting to break in in the mid-to-late 2000s, Facebook was the thing and everyone connected on Facebook. So I would just be on Facebook and I would draw and post art. And I would meet people online and I also lived in San Diego, so I would go to San Diego Comic-Con. I did that every year. The impetus for me moving there in the first place was because I had a book I did with a friend that got picked up by an independent publisher in Miami, and the publisher took it to San Diego Comic-Con to table there. And going to that (convention) every year I met writers and other artists, people who now are in at a company instead of working at the publishers as an intern or as a booth person during a con.

And then it's like any other job — you just go to where the rest of the pros are and you network and you put your work out there and hopefully people respond to it.

So Tony, where are you from?

I was born in West Palm Beach, Florida, and I lived in South Florida. About 2007-08, I moved to San Diego for about five years, lived in Boulder for about a year and then came to Missoula in 2012. I’d become close friends with a writer named Tim Daniel who lives here and he was constantly heaping praises on Missoula, telling me how great Missoula is, and I should check it out.

I was working two jobs at the time just to get by because the cost of living was so expensive in Boulder, and I was finding myself further and further from my dream which is drawing comics. My lease was up and Tim said “Hey, you should come check out Missoula.”

Then I came out here and fell in love with the place.

How long have you actually been drawing comics full-time? And how long were you actually gaining the skills to become a comic book artist?

So when I was really young, that was my dream — I drew comics as a kid and my mom would staple them together. I draw dinosaurs and sharks and whatever little kids draw — superheroes, stuff like that. I grew up reading comics and then when I was in high school, I kept with it, and I was drawing all the time.

But when I got out of high school, I graduated and I kind of went off on a period of “self-discovery.” I grew up in South Florida in the ‘90s, so there's a lot of trouble to get into.

Once I cleared my head and cleaned up my act, I started working in bars. I was a bartender all through South Florida, Fort Lauderdale, Miami, for a long time. And in the mid-2000s I was working at this bar that was across the street from an art institute. I was working with these kids who went to school there who were art students at the art institute and I was looking at their portfolios and then in the back of my mind, I'm thinking like, you know, I haven't drawn since I got out of high school, it's been like almost a decade and I'm like, I can draw better than any of these kids can and they're going to school for it.

And at that point in my life, I was like in my mid-20s. I was trying to decide what I wanted to do with the rest of my life because I didn’t want to be a bartender forever. To be honest, the profession is a good living but I wanted to do something different with my life and the only thing I ever really knew how to do was draw.

I read through "The Worst Dudes" and I know that you're now working on "Teenage Mutant Ninja Turtles," but what other comics have you drawn in the past?

Well, "The Worst Dudes" is without doubt my favorite thing I've done because it was a whole series through Dark Horse Comics and it was a dream opportunity.

I did two books through Vault Comics, "Deuce of Hearts" and "Karma Police."

"Karma Police" was probably my first breakthrough — that was the first time I was able to really sink my teeth into something like a whole series.

What I'd done before was shorts for anthologies or one-shot 32-pagers that we would crowdfund, but ("Karma Police") was the first real series, and I really immersed myself in this world with these characters and was able to do a lot of intense world building, which I enjoy.

Generally, I work with a collaborator. So I'm working with the writer usually and second, just like any other collaborative process, you chat on the phone, you email, text, they send me documents. It's hard for me to just pick apart, like, who created this character, who designed this, like who came over the ideas?

Sometimes it's me just sitting at the desk, “Oh, I want this character to be one characteristic, a giant nose” and then his name is Schubert, Schubert De Schnozz.

And then there's a character called Cuisinart. He's just a guy with a blender for a head, and that was [the writer’s] idea.

What are your influences?

They’re from all over the place now, but I grew up in the ‘80s. So definitely "Star Wars" and Spielberg movies and things of that nature are definitely a part of my foundation. It's like classic pop culture. Now it's all nostalgia and you know, "Stranger Things" and it's all reflective and looking back but at the time it was all “Oh my god. This is new and crazy.”

Do you read a lot of other comics as well?

I used to, but not as much anymore. Just because it's like, if you do something all day you don’t want to do it some more. I will read classic stuff like "Mobius," or like "Unbreakable Batman," or like a classic X-Men run, but I generally like contemporary stuff. But I think it's like, you know, when I was coming up and I was younger, like it's all mystical and it's all like, how did they make this, how they do this? Now it's more that it's hard to read something and not be totally analytical and break it down.

How did "The Worst Dudes" come to be?

Aubrey (Sitterson) reached out to me in 2018 and asked me if I want to work on something together. And I said, sure because I was a fan of his writing.

So he was like, all right, I got this idea for a story that I've been kicking around. It's a space road trip. It kind of started off like we wanted to do something that would be what the inner 15-year-old in us would be a fan of.

But we also wanted to layer that with subtext. And there's something beneath all the crass humor and dirty jokes and nudity and drug use and stuff. There's a story about toxic masculinity and “daddy issues” and forgiving yourself. Also, the idea that because somebody does bad things doesn't mean they're a bad person and just because somebody does a good thing doesn't mean they're a good person.

And we wanted to say you can still do that stuff, you just have to be artful about it. You can't just insult people, you know? You gotta be self-aware and you also have to make fun of yourself.

Thomas Plank is a former Missoulian and Independent Record journalist. When he is not working for Backcountry Hunters & Anglers, he is fly-fishing western Montana's rivers and considering better ways to expand his bookcase situation because let him tell you, he's running out of room already.

Tony Gregori will be at Muse Comics on Saturday, May 7, for Free Comic Book Day. Come down and chat him up about Spielberg, "The Worst Dudes" and following your dreams at 1940 Harve Ave., Missoula from 10 a.m. through mid-afternoon.

Take a walk and experience a play on your phone