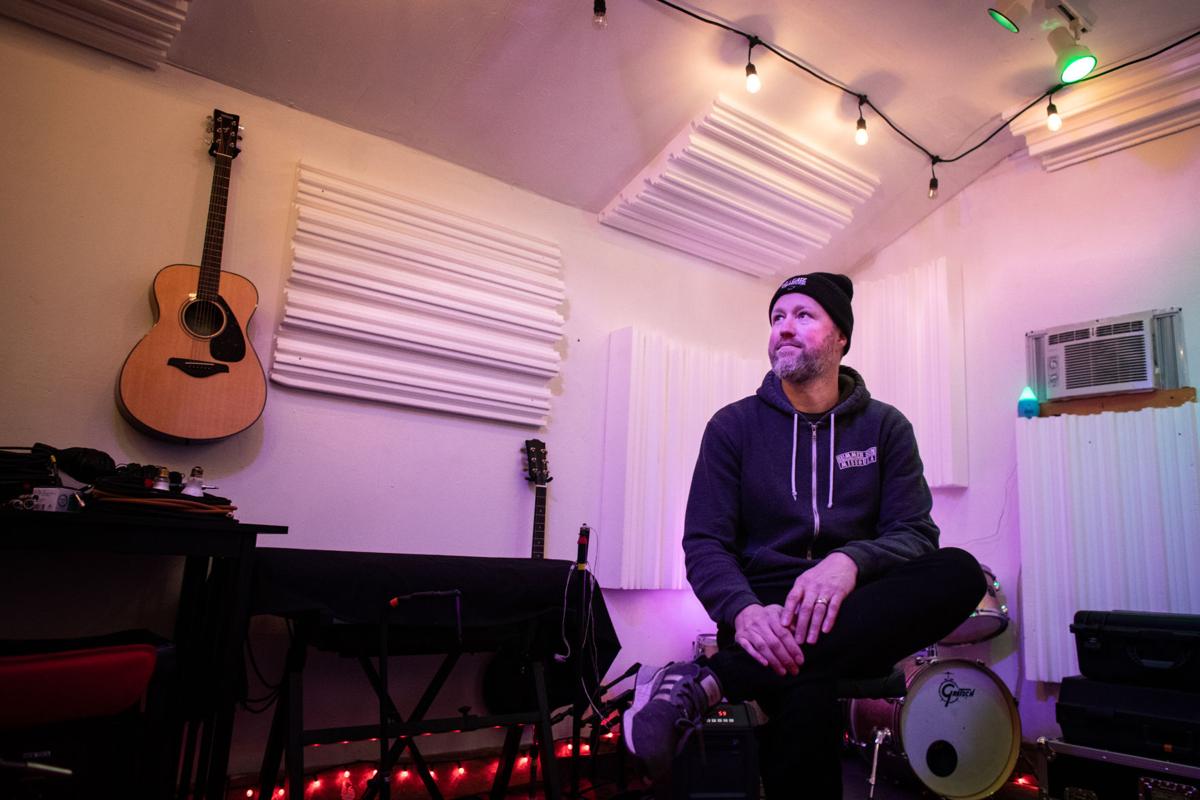 Owner of Attack and Release Sound Matt Olson, in his recording studio on Tuesday afternoon. Olson, a professional soundman for venues around town, is beginning to experiment with live-streaming music events, in light of cancellations due to coronavirus. 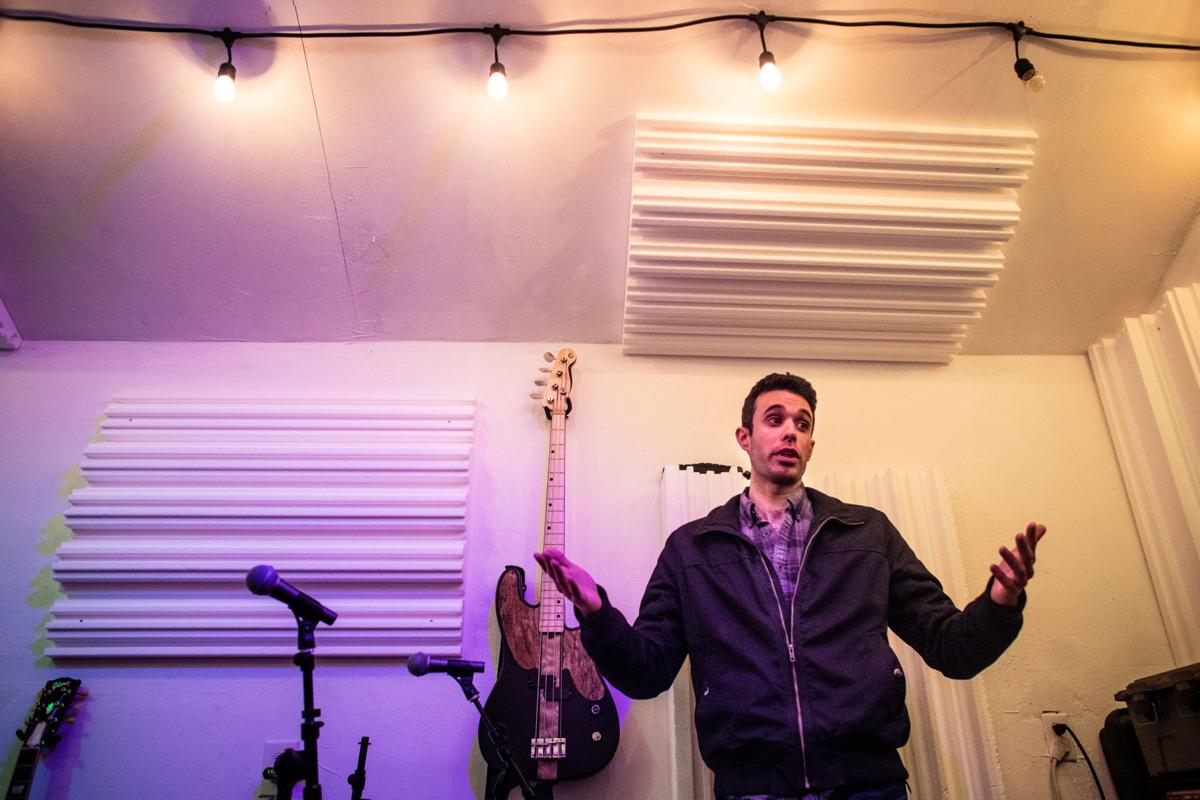 Missoula musician Valley Lopez discusses strategy for live-streaming shows and bringing Missoula artists together to create virtual events and support the community in Missoula. Lopez is helping to start an organization called Missoula LIVE Arts that will work toward finding a way to replace lost income for performing artists. 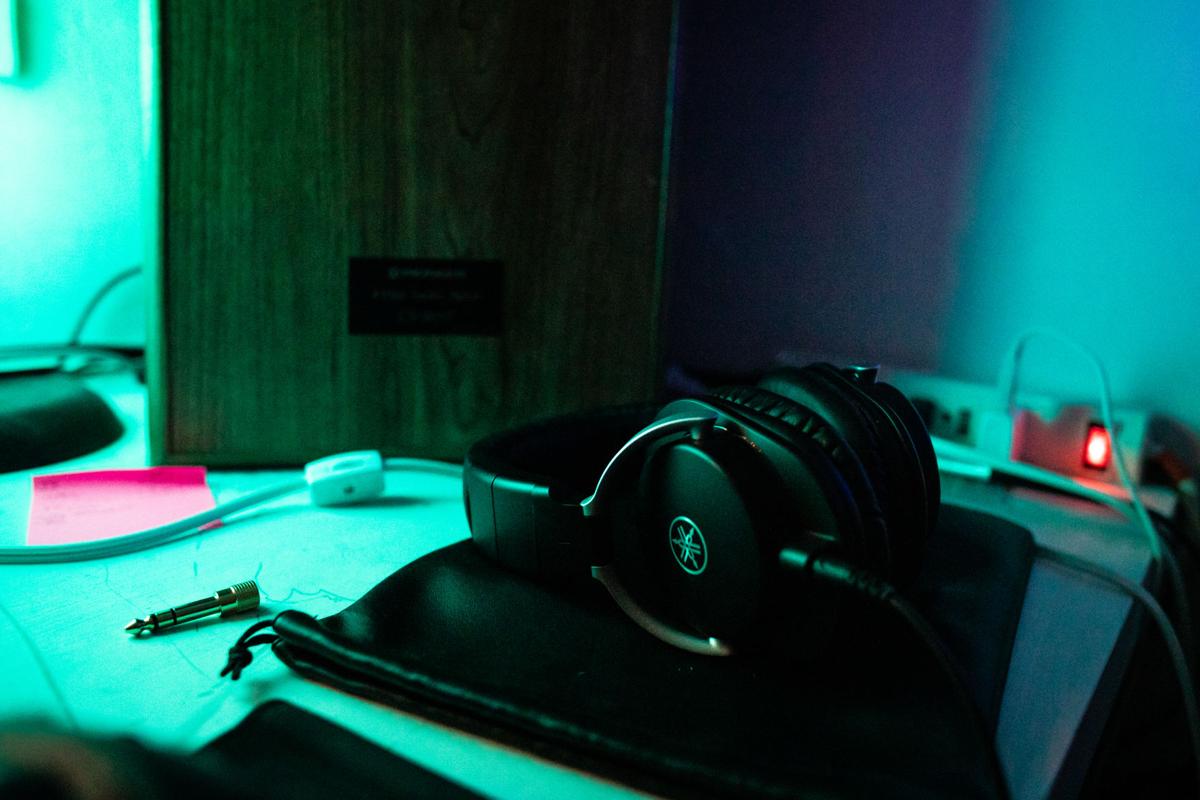 Headphones sit on the counter of Matt Olson's garage-made studio, where he records music. For his live streams, Olson plans to have sound run through boards to achieve higher quality than typical live streams.

Owner of Attack and Release Sound Matt Olson, in his recording studio on Tuesday afternoon. Olson, a professional soundman for venues around town, is beginning to experiment with live-streaming music events, in light of cancellations due to coronavirus.

Missoula musician Valley Lopez discusses strategy for live-streaming shows and bringing Missoula artists together to create virtual events and support the community in Missoula. Lopez is helping to start an organization called Missoula LIVE Arts that will work toward finding a way to replace lost income for performing artists.

Headphones sit on the counter of Matt Olson's garage-made studio, where he records music. For his live streams, Olson plans to have sound run through boards to achieve higher quality than typical live streams.

Local musicians are experimenting with live-streaming concerts after their gigs have all been canceled, whether at a local venue or an entire tour.

One resident helping make that happen is Matt Olson, who runs Attack and Release Sound and Studio. He works as a professional soundman at venues like the VFW and Free Cycles, and also records local bands.

He did a stream last Friday with the folk band Judith Gap that he said went smoothly. He's working on refining the sound. Unlike many Facebook Live events beamed from a smartphone, his will have professional sound run through his boards.

"That's my whole life, getting things to sound better," he said.

He'll work from either his recording studio in East Missoula or perhaps from a venue like the VFW, which will be empty save for himself and the musicians, and has followed the latest recommendations on safety and sanitization. He said the shut-down on bars and events has affected him "massively," since live events are the majority of his income. Shows have been dropping off his calendar rapidly, as locals cancel and visiting acts postpone or call off tours.

Its events could include musicians, comedians, entertainers and other performing arts in partnership with venues (potentially at those venues, sans crowds) and sponsorships. It could help make up for their lost income while providing a sense of community from the safety of home.

They're looking to include engineers and producers who also are affected, and to ensure that everyone gets paid.

"The goal is have daily events that people can watch and they support the artists and portions of the money are also going to go the community, like the Food Bank and other places like that," he said.

"I think the arts are a great way to help people get through this," he said.

They both said safety is a higher priority than going ahead with gigs in front of live audiences.

Olson is trying to line out more recording sessions for his business.

"Hey, if you're not on tour and you're not performing, now's the time to come into the studio and record," he said.

Izaak Opatz, a Whitefish native, had to cancel an upcoming multi-state tour with 16 dates. After spending time in Nashville and Los Angeles, he had cultivated enough attention that Rolling Stone Country wrote an article about one his tracks.

At this point in his career, he expected the tour might be a break-even proposition for him and his band of L.A. musicians.

"I've just been able to get better and better shows over the years and this was kind of a good-looking tour for someone like me. Mostly, it's a loss of that opportunity to play some of these venues and get in front of people," he said.

One of the prime stops was TreeFort, the musical festival in Boise, Idaho, that's something like the South by Southwest of the Pacific Northwest. That's been postponed until September, and he's uncertain whether he'll arrange an entire tour around the date, especially if it could get scuttled again.

The tour was put together by a booking agent, who was going to be paid a percentage from the door. He did all the advance work and now won't get anything. "He's almost losing out more than we are," Opatz said.

"All kinds of people are affected that you don't even think about," he said.

He now has a month and half to spend in Missoula, likely writing more songs for a new album — he already has one recorded that's now delayed — and making hand-tooled leatherwork to help pay his bills.

He's decided to sign up for another summer working on the trail crews in Glacier National Park, his old job, since at least it's reliable and has the bonus of taking place in remote locations.

"It's never been something that appealed to me too much when you could congregate in person, but it definitely serves a purpose now," he said.

Singer-songwriter Caroline Keys recently recorded an album with her group Junior, which features vocals by herself, Jenny Lynn and Hermina Jean. Their Friday date was originally intended as a private house show to raise money to have their new recordings mixed and mastered.

Instead, they'll play at Olson's, "sort of like a youth-group lock-in," she said.

There might be Q&As and other things to mix it up. She's never done a live-streamed concert either, but thinks it might be a way invite the outside world to see Missoula music. "People don't have to be together to get together," she said. She believes streamed or virtual events will help people "do something normal" and "if we're going to be in this status for a while, I think it's going to be incredibly valuable."

Travis Yost, 38, has made his living as full-time musician for 10 years, and played part-time going back farther, 25 years. After putting in work as a drummer for established bandleaders like Tom Catmull, he transitioned into a solo act, singing and playing guitar, including originals and covers.

He hit the road hard to take advantage of brewery gigs, for instance, which became a reliable and financially viable source of income, often playing as many as 20 or more in a month.

He played one gig in March. As of Monday, 11 gigs had canceled, from Ten Spoon Vineyard and Winery to Norris Hot Springs, DraughtWorks Brewery and house concerts.

"Ninety percent of my income for the month of March is gone," he said. He expects April to be bad as well.

So on Sunday night, he logged into Facebook and tried live-streaming a concert. He wrote his Venmo and PayPal information on a piece of paper that was visible through the show.

"I took to begging on the Internet last night, that's where life is right now," he said.

Thankfully, the infrastructure for live-streaming is already built and ready to go. At any given time, about 30 people were watching, and gave enough donations that it made up for the loss of a few gigs.

"If the streaming model is like the busking model, and you can get people for 10 minutes that's a win. That's amazing."

He said he felt somewhat "guilty" asking for money as other people lose work, too.

"I feel guilty about people who have jobs that cannot be replaced by anything, so I don't know what to think about it," he said.

If he has to, he'll find other work. For now, he's dipping into a savings account that was intended for a stretch of time off.

"The bigger part is that I love performing and so I have to do that. I do turn into a giant ass---- if I don't perform, and so, OK, put up a camera and stare into the Internet for awhile? Does that fill that void? It did last night," he said.

He'll try another one on Sunday, March 22. Check his Facebook page or his YouTube channel, "Missoula Hit Machine," for more.

Travis Yost is going to live stream a concert on Sunday, March 22. Go to "Missoula Hit Machine" channel on YouTube or his Facebook page.

Junior and Izaak Opatz are going to live stream a show at 7 p.m. Friday, March 20. Go to the Attack and release Studio and Sound page.

On Saturday, March 21, watch Freedom Loader live from the VFW. It will likely start around 8 P.M.

On Sunday, March 22, watch Cory Fay and the Good Goddamn at approximately 7 p.m.

Check Missoula LIVE Arts on Facebook for information about their upcoming shows.

Email us your events

If you have a live-streamed local event, email the date and website information to entertainer@missoulian.com. The deadline is Tuesday for publication in Friday's art section.

Arts in Missoula: Four arts 'events' to check out from home