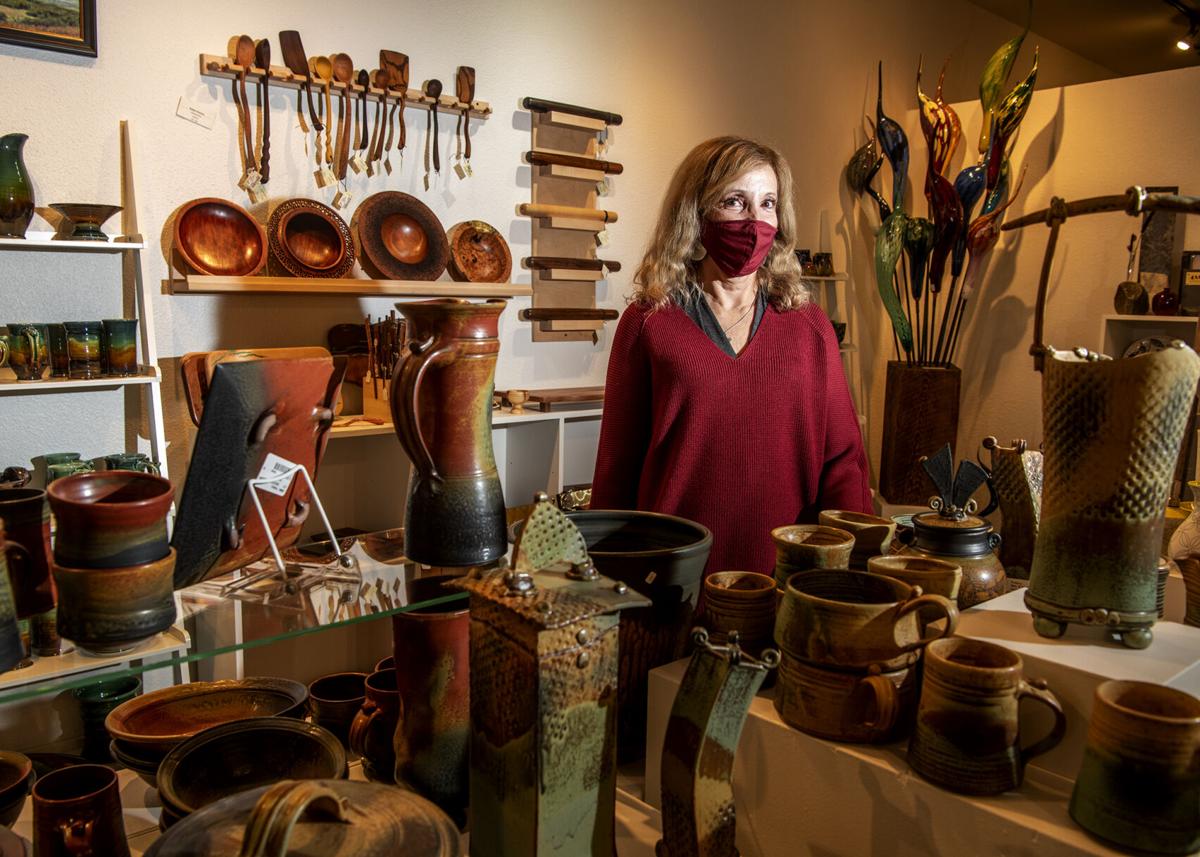 Maryann Eikens, a bronze sculptor, stands in the 4 Ravens co-operative gallery's new space in the 200 block of North Higgins. Heading into the winter season, downtown art galleries, which once hosted a bulk of First Friday events, are cautious and optimistic of the future. 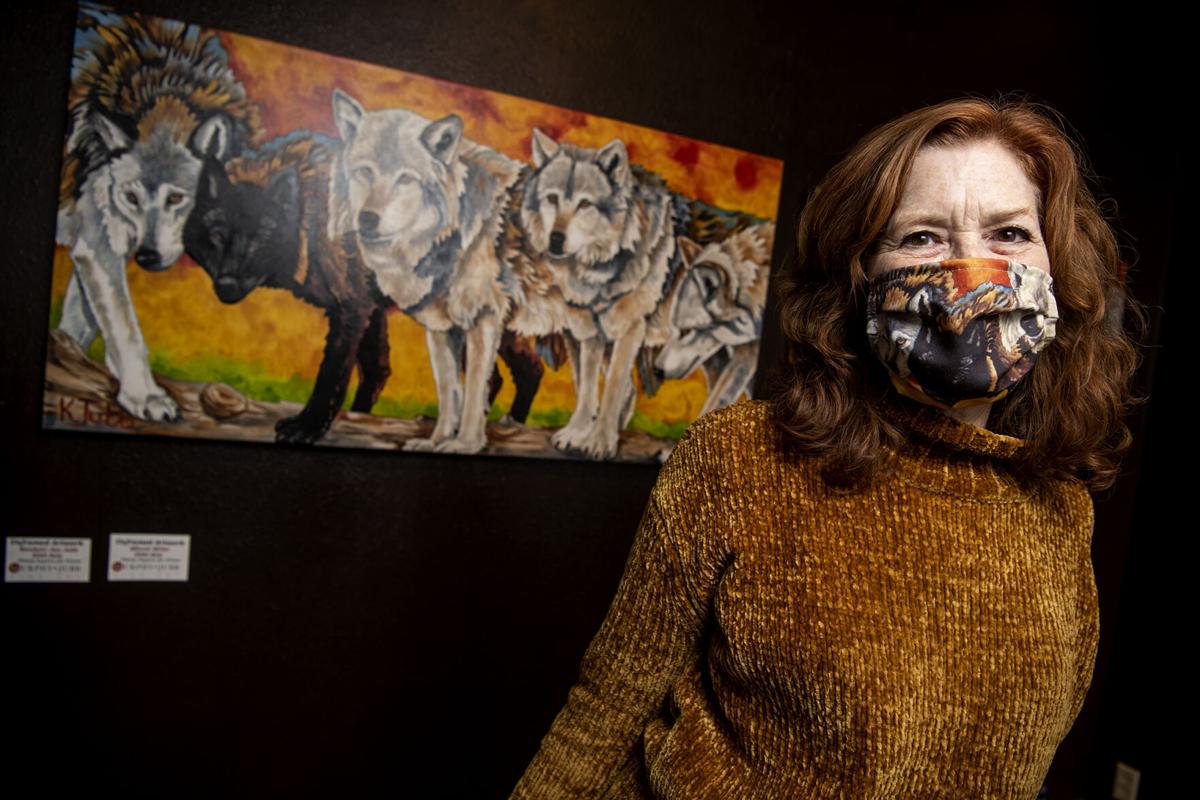 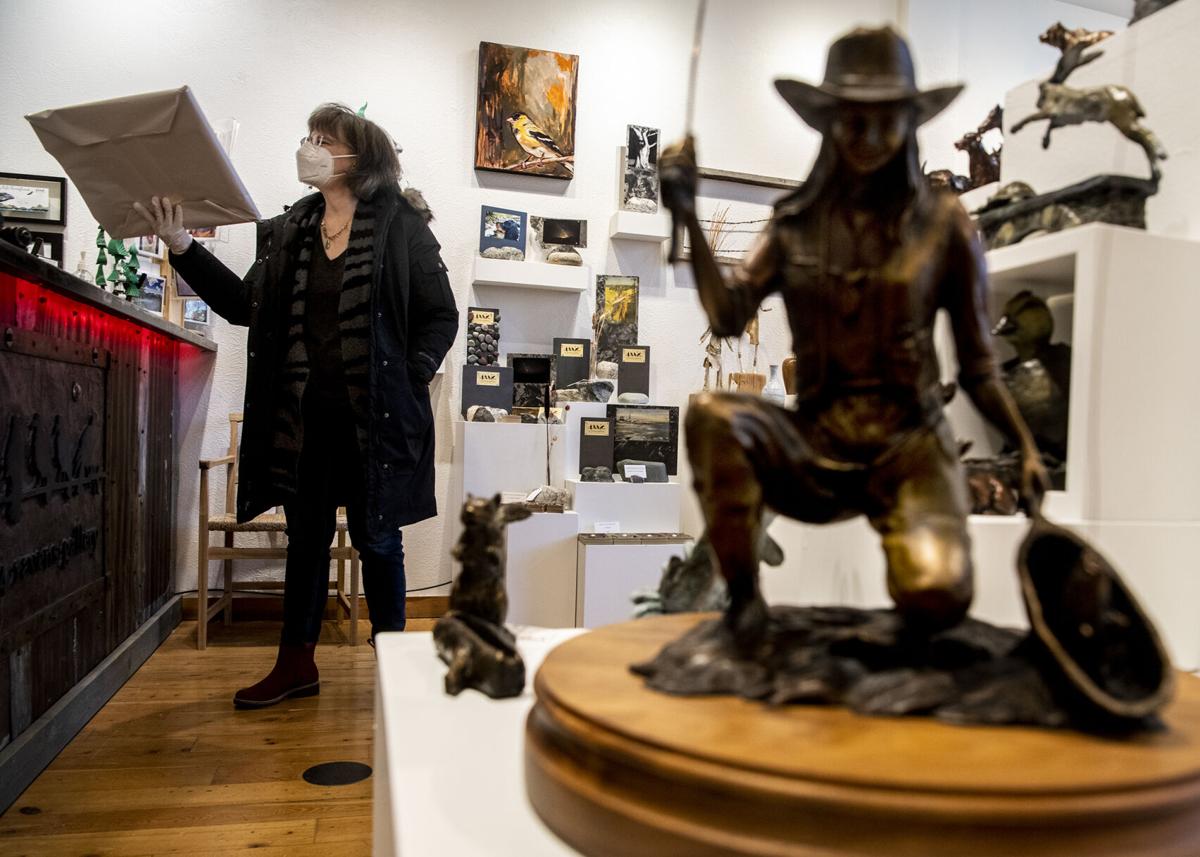 Elaine Gagliardi, a professor at the Alexander Blewett III School of Law at the University of Montana, picks up a painting from 4 Ravens gallery on Tuesday.

Maryann Eikens, a bronze sculptor, stands in the 4 Ravens co-operative gallery's new space in the 200 block of North Higgins. Heading into the winter season, downtown art galleries, which once hosted a bulk of First Friday events, are cautious and optimistic of the future.

Elaine Gagliardi, a professor at the Alexander Blewett III School of Law at the University of Montana, picks up a painting from 4 Ravens gallery on Tuesday.

Downtown art galleries, the core of First Fridays that once drew thousands of people up and down Higgins Avenue, are heading into winter in a varied state of caution and optimism, particularly since news of vaccine timelines are solidifying.

In some cases, business is down drastically, and many don’t hold art openings any more at all since they don’t want too many people in the door at once. But many gallery owners expressed confidence they can weather the winter, and others reported a strong year despite the restrictions.

Several months ago, 4 Ravens, a co-operative gallery run by member-owners, had a meeting. Their lease at the corner of Higgins and Broadway was expiring, and they decided they needed to either renew, move or close.

They decided to scale down to a storefront on the 200 block of North Higgins formerly occupied by the Rocky Mountain School of Photography.

William Munoz, a gallery partner and photographer, said it’s “roughly half the cost, lease-wise, so our expense is half, but it’s also half the space.”

While they can’t display as much art, they didn’t have to cut any of the 75 artists they show, who hail from Montana and the broader region, in a mix of fine art (photography and paintings) and high-quality crafts (woodwork, clothing, jewelry and more).

The middle of March through July was “bad,” said Katie Patten, a member-owner and glass artist. They stopped hosting First Friday openings, since their entryway, which they share with the Dana Gallery, was often packed in normal times. They’ve been participating in virtual First Fridays with Arts Missoula, and have redone their online store, which will be a “major focus for winter,” she said.

Munoz hopes the location, with large glass windows between Fact & Fiction and Doc’s Sandwich Shop, will benefit them, along with the proximity to the Merc and more new hotels on the way.

A few days in, they’re pleased with the foot traffic — although Munoz, who shoots concerts, said the pause on large events has also nixed the influx of sales they’d see around show dates.

“We can survive the winter and into the spring, no question," Munoz said. "We’re OK with that financially because of the move, but that’s been the main concern for us."

Patten said they’re “optimistic” about Missoula’s future, but have concerns that downtown’s “quirky” local character could be victim to rising rents.

Murphy-Jubb Fine Art opened 15 years ago, with painter Kendahl Jan Jubb’s ornamental paintings of flora and fauna as its signature fare. It also carries ceramics by Richard Smith and paintings by M. Scott Miller, best known for his Missoula night scenes, among other artists.

Co-owner Ram Murphy said that this has been a “positive year,” and “traffic is less but sales are up.” That’s in comparison to the recession and its aftermath in 2008-11, in which they were “badly scalded.”

They have smaller in-person First Friday openings than they used to — fewer people are allowed in — but he believes it’s an important marketing tool that still leads to follow-up purchases. In addition, he thinks it’s better to remain a destination during the art walk rather than try to rebuild from scratch in spring or summer of next year.

Regarding the traffic, he says people seem to come in with a purchase in mind already, rather than “coming in to kill time.” He suspects that the increased amount of time at home has pushed some people, including younger customers, into re-thinking their home decorations.

The gallery’s calendars of Jubb’s paintings are now complemented by a sign of the times — a line of five or more cloth masks emblazoned with her work.

“People are really turned on by them,” Murphy said, even if some, understandably, ask for mail delivery.

The oldest commercial gallery, the Dana, also had a “surprisingly great year,” according to Dudley Dana. Like Murphy-Jubb, it’s weathered stronger recessions, and at some points Dana considered closing the doors. This year, it’s seen strong sales from its regular stable of artists, like the painters Robert Moore and Caleb Meyer. Earlier in the pandemic they held an online sale geared toward helping their artists, and are starting an online auction this week.

In prior economic downturns, which wiped out galleries around the U.S., he said the gallery made it through because local buyers, rather than tourists or out-of-state collectors, kept them afloat.

Radius Gallery, which is holding its annual holiday show with hundreds of pieces through December, has focused on local artists in hopes of drawing local interest.

Their strategies for designing shows and figuring out what people respond to have been disrupted, though, with no reliable ways to gauge previous successes to future ones.

“It seems like that is all sort of out of the window,” co-owner Jason Neal said.

Foot traffic is lower in their first winter in their new building next to the Merc. They’ve created a time-slot reservation system for openings, instead of the crowds that they welcomed in early 2020. A redesigned website has proven successful with out-of-town customers and locals who don’t want to come downtown. And as a point of pride, they didn’t have to cancel any shows.

The Artists’ Shop on North Higgins noted the decline in international tourists over the summer, who usually comprise part of their busy summer season en route to national parks.

They sell work by 11 co-op members and additional consignment artists, “a business model that has allowed us to remain open and viable,” said Anne Franke. They share duties and the pressure isn’t levied on a single owner like some businesses.

“We’re not down and out but it’s definitely been an unknown going into it,” she said, calling the earlier stages “nerve-wracking.”

They’re closed on First Fridays, instead opting for the Arts Missoula virtual event. Foot traffic was strong on Small Business Saturday last week, and locals are stopping in.

“We’ve been able to move forward one month at a time and have plugged along, so that we could get through it,” she said.

Munoz, from 4 Ravens, thinks next summer could be “vibrant” downtown in a different way, as concerts eventually resume and the city sees more growth from tech firms and movie production companies, and people begin traveling more again.

“We’ve had to adjust and I feel that we have done it with a great deal of consideration and it will pan out,” he said. Then adding the caveat: “It may be a very slow winter.”