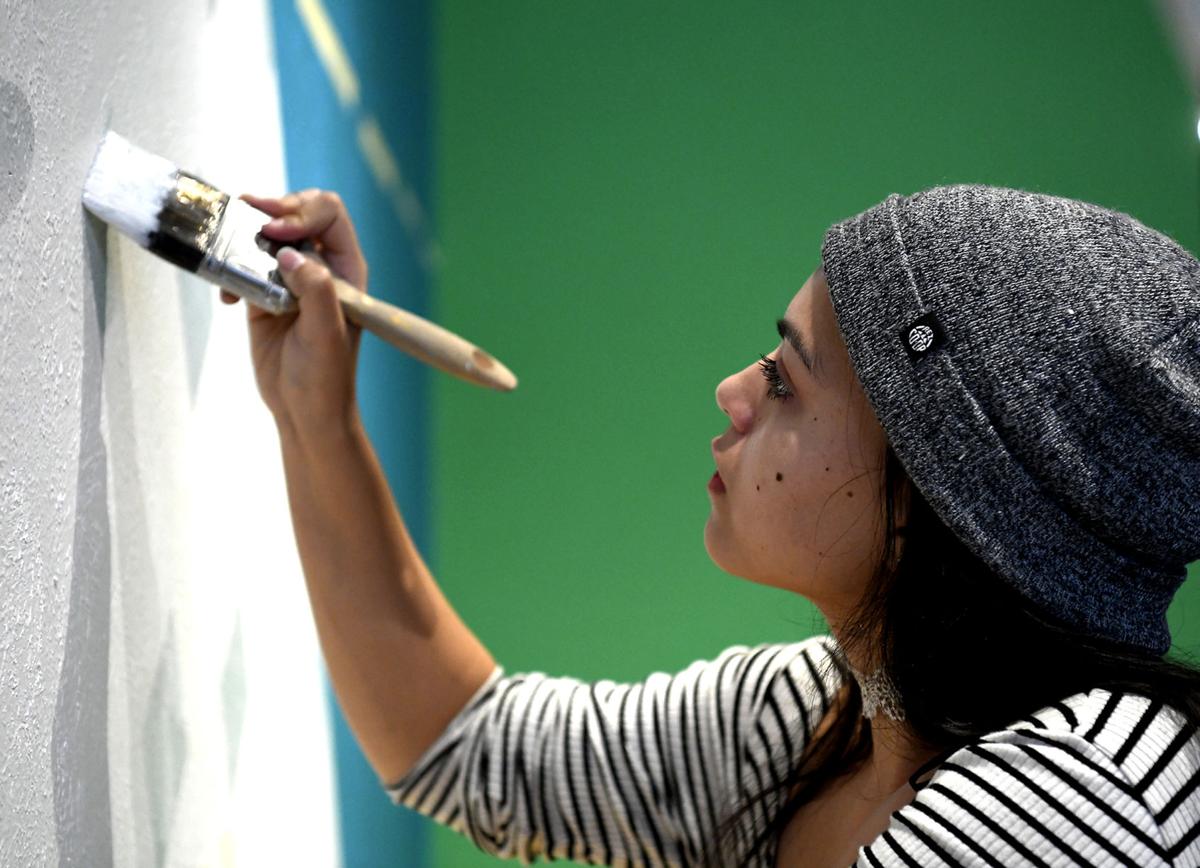 April Werle works on a mural she's painting at the Kulture coffee shop in Missoula recently. Werle, a graduate of the University of Montana's School of Art, began painting murals after being asked to create one while travelling in Morocco. 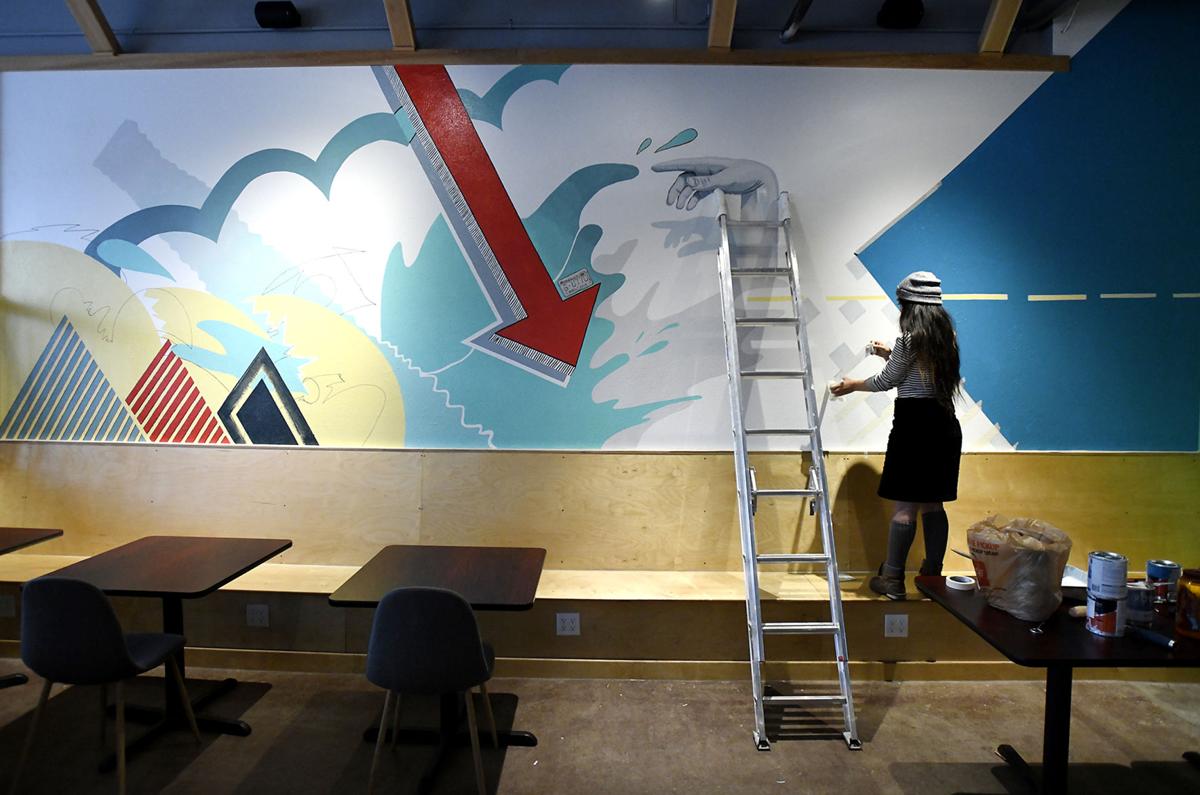 Werle works on her mural at Kulture, where she spent two weeks painting. She said it's the largest mural she's painted to date.

April Werle works on a mural she's painting at the Kulture coffee shop in Missoula recently. Werle, a graduate of the University of Montana's School of Art, began painting murals after being asked to create one while travelling in Morocco.

Werle works on her mural at Kulture, where she spent two weeks painting. She said it's the largest mural she's painted to date.

April Werle had never done a mural before, but her hostel host in Morocco learned she was an artist, and — pointing to a blank section of wall — asked her to contribute to a building full of former visitors’ art.

“That was my first one,” Werle said. “After that, I knew that I wanted to keep doing them.”

Werle, who is from Helena and graduated from the University of Montana's School of Art in 2017, had done large-format art before, but mainly using found objects; trash and vintage paintings, mostly.

But after painting murals in Africa and Asia, she’s now back in Missoula, adding to downtown coffee shop Kulture’s (formerly Kulture Kava) arty atmosphere with a huge, bright mural covering the west wall.

The mural is built around a chunky red arrow, which angles down pointing at about head height at the seat below. Large teal triangles, yellow circles and other touches, like paint pen free-drawing and a finely detailed hand, limply pointing at a drop of water, fill in the mural.

“I really like working large, because it’s so about your body and your relationship to the space,” Werle said. “I don’t plan anything.”

After painting the initial shape or picture, she “responds,” adding other pieces of the mural one by one, as she feels inspired by the previous part.

“Now I’m just hustling to get walls,” Werle said of her verve after painting the first mural in Morocco. “It’s kind of taking over making physical work.”

After the 2018 art residency in Morocco, Werle went backpacking with her partner, also an artist, in Greece, Malaysia and Thailand.

The two had met while studying abroad in Malaysia and were eager to visit Southeast Asia again, this time registering with the website Workaway, which matches travelers with locals who will give them food and a place to stay in exchange for work. The two looked for any hosts who wanted murals.

Werle packed brushes, along with her sketchbook, where she outlined ideas. She matched up with a woman who owned a children’s theater in Bangkok, who wanted a mural at their headquarters.

In Malaysia, Werle had no trouble finding places to paint.

“The arts are booming right now (in Malaysia),” she said. “In the last few years, street art is becoming a thing.

“I think it’s going to be somewhere that I continue to go to.”

Her experiences painting murals varied. One host handed her a wad of cash to buy paint and pointed her in the vague direction of a home supply store. Their house paint was really expensive, Werle said, and she eventually ended up at an art store.

Some hosts wanted specific colors or themes painted in the murals, but others would let Werle paint what she wanted to, as long as she kept within the varying budget.

Nearly all of her murals have been done with house paint, which is fairly common for mural artists, Werle said, though it’s different than usual acrylics or oils. Made of latex, house paint can peel easily, coming off in whole sheets when Werle removes the painter's tape edging the piece.

It also can require multiple coats, especially when using red or yellow. It is, however, much more cost-effective than fine arts paints.

The mural at Kulture is Werle’s biggest so far (“just by a few feet”) and she’s glad she asked for two weeks to complete it, over the usual one-week time frame for her murals abroad.

Over that two weeks, she spent about two hours per day painting, over and around customers seated on the wooden bench that stretches along Kulture’s west wall.

Before she started painting, Werle noticed “no one sat at that bench.”

“Progressively, every day, I’ve had to wait a little longer (to start painting) 'cause people have been sitting there.”

One customer told her she sat underneath the red arrow when meeting someone at the shop.

“I think it’s the best one that I’ve done,” Werle said, nodding at the mural.

Now she's living in Missoula while saving for the next overseas trip. Though, she was quick to add, she doesn’t have to stay in Missoula.

“Wherever there’s walls. That’s just what I want to focus on.”