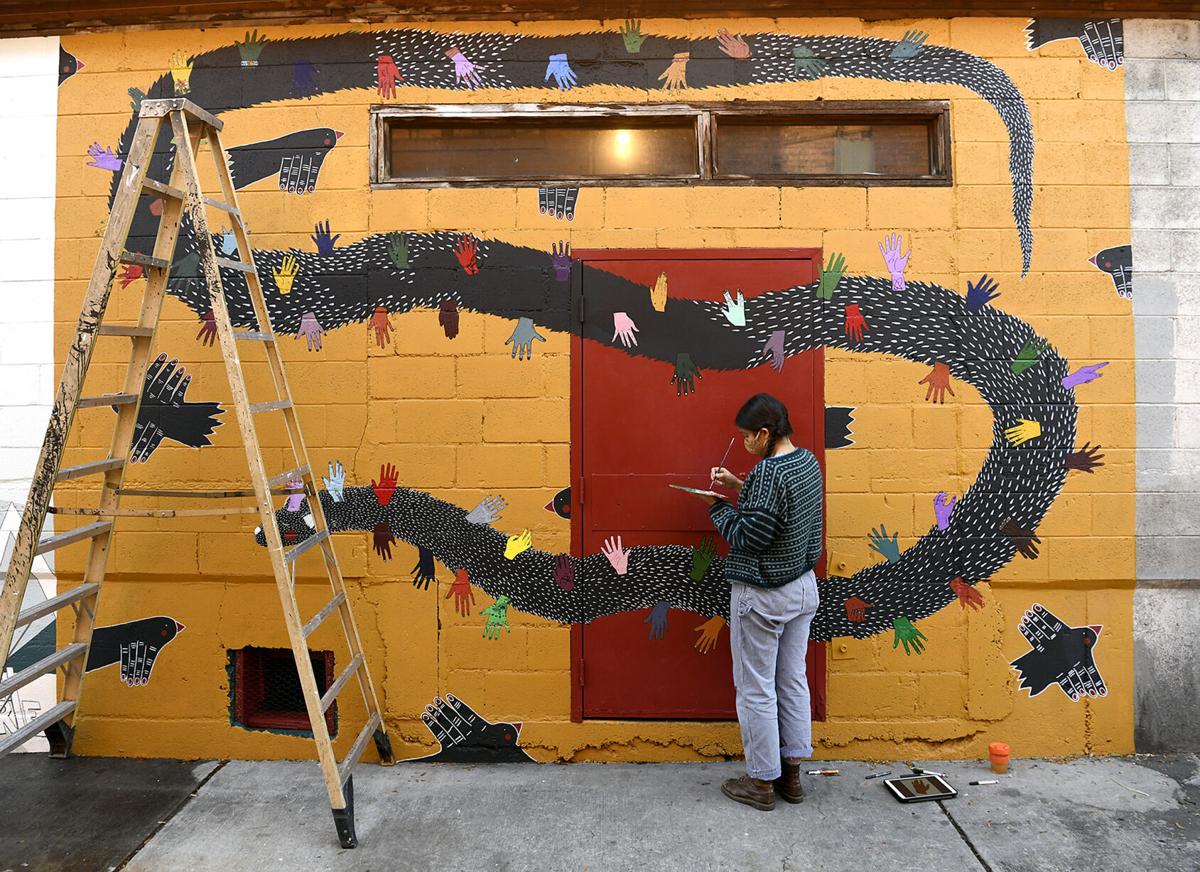 Stella Nall works on her mural in the alley behind Zootown Arts Community Center. Her mural features a black snake decorated with about 70 silhouettes of the hands of people who responded to her call to participate. 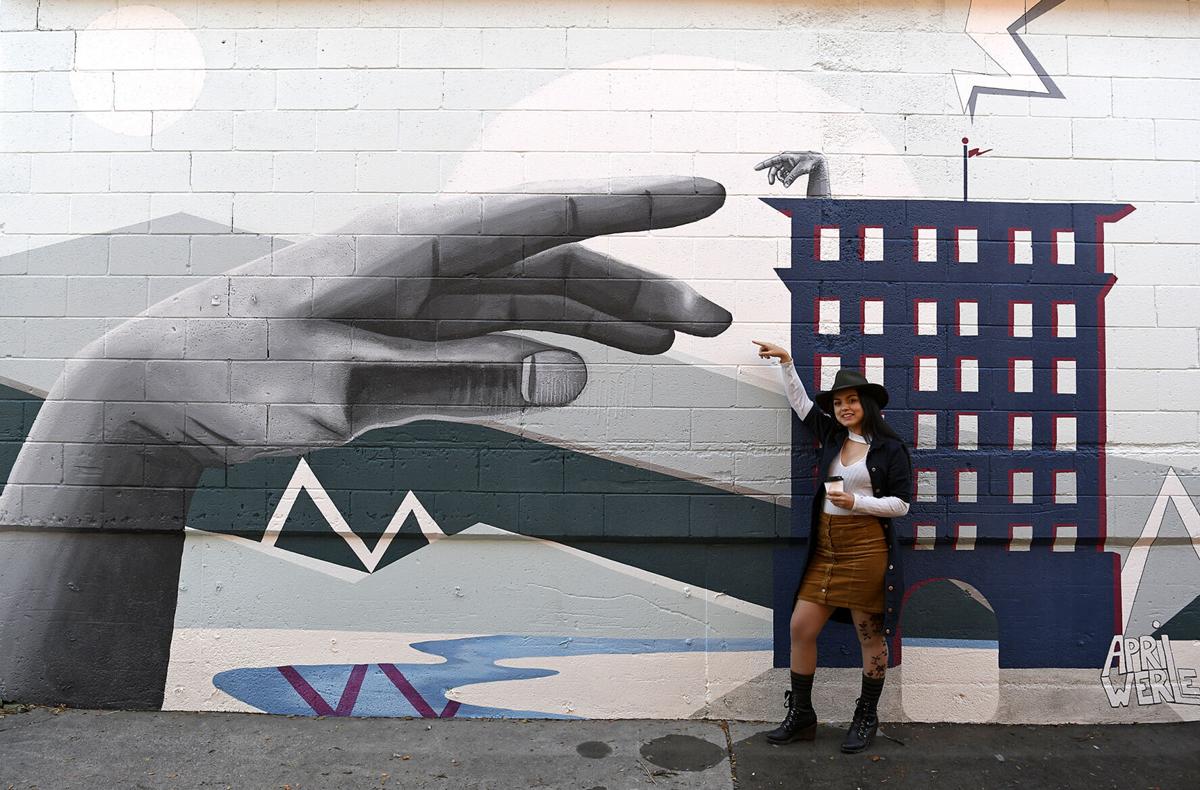 April Werle stands in front of her mural, which features hands as characters engaged in conversation. 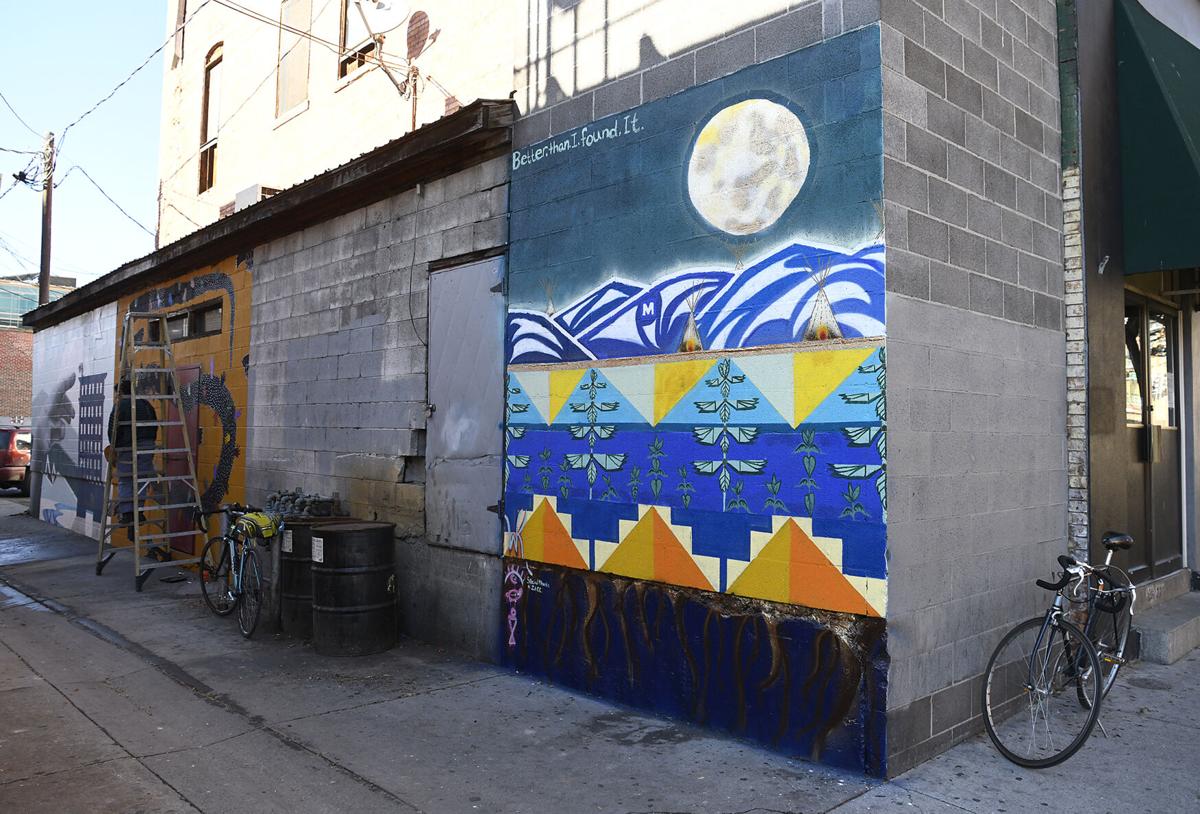 Willow Kipp, a Blackfeet/Shoshone-Bannock artist and recent University of Montana graduate, wanted her mural to represent Missoula from the roots to the mountains, including imagery that would "indigenize" the space.

Stella Nall works on her mural in the alley behind Zootown Arts Community Center. Her mural features a black snake decorated with about 70 silhouettes of the hands of people who responded to her call to participate.

April Werle stands in front of her mural, which features hands as characters engaged in conversation.

Willow Kipp, a Blackfeet/Shoshone-Bannock artist and recent University of Montana graduate, wanted her mural to represent Missoula from the roots to the mountains, including imagery that would "indigenize" the space.

One alley in Missoula is looking rejuvenated and more welcoming with new murals by a diverse trio of Montana artists.

The "Feeling Welcome" theme gave the artists a public space to explore issues of identity and belonging along a busy street.

“It has really come to fruition and made it feel like more of a space that belongs to the community” rather than just an empty alley, said Kia Liszak, the executive director of the Zootown Arts Community Center.

Last year, the ZACC applied for and received a $10,000 Challenge America matching grant from the National Endowment for the Arts to fund the “mural alley” behind its new building on West Main Street.

They put out a call for submissions, with an emphasis on artists and input from underserved portions of the community. A likewise diverse group helped them in the selection process, with three of the four artists able to complete their sections before winter.

The mural by Willow Kipp, a Blackfeet/Shoshone-Bannock artist, is situated closest to Ryman Street, catching passers-by with “a geometric design that starts at the roots and goes all the way to the mountains,” she said in a phone interview from Heart Butte.

Her piece does just that in layers, starting with roots at the street level. Above those are angular shapes and two interpretations of mint, a medicinal plant that grows on riverbanks around the area. She painted them in both representational curves and in more triangular traditional styles. The plants serve as a “reminder that we’re a part of the natural world” even if we forget it during day to day life, she said. That message also aligns with her theme, written in the upper-left corner: “Better Than I Found It.”

“When you’re traveling to new places, where the circumstances are good or not, you can always leave something better than you found it,” she said, or even simply a reminder to do better in everyday life.

The prominent Native designs are a way of “Indigenizing” the corner, since Montana is lucky to have such a high number of reservations and tribes, she said.

Next are blue-and-white mountains, one marked with an “M.” Kipp is a recent University of Montana graduate, her mother works there, and she has many alums in her life. Teepees can be seen on the valley floor and in the hills, to “recognize the deep roots, metaphorically and physically, that Missoula has, with being Indigenous lands as well.” In the lower lefthand corner, she signed her initials, as well as a set of symbols that represent her name, "Holy Beaver Woman," or "natoyiiksistikiaakii."

Kipp has more to add to her piece, but had to pause for the winter after she made enough progress. The location made it difficult. She thinks it’s a “progressive” and awesome project for the ZACC, to showcase Indigenous art in a prominent place, something she hopes will become more of a trend in Missoula.

A black snake wraps around a set of windows and a red door, set on a muted yellow-orange background. Small birds with finger-like wings flutter about. Besides hundreds and hundreds of tiny white hairs painted by brush, the snake is decorated with about 70 silhouettes of hands in a rainbow-assortment of complementing tones.

For her mural, Stella Nall wanted community participation, a feature of the installation-style shows the recent University of Montana graduate has held.

“Since I’m an Indigenous person, I was at first really interested in trying to reach out to people who are potentially marginalized, and giving space for their voices to be amplified. And then I ended up putting an open call out for anyone who wanted to be involved,” she said.

She asked for people to send a photograph of their hands, list their favorite color, and include a sentence or two about themselves. She then painted their hands onto the wall in that color. Within a few weeks, she’ll have completed a digital book available on her site and the ZACC website that includes all of their writing. It’s a way to create community connection “in a time where we’re isolated. A way for people to meet each other,” she said.

Cumulatively, in the book and in the mural, the hands are a hopeful collage of voices.

“Each individual person is still a human, even though there’s a lot of divisive things right now,” she said.

Nall favors creatures in her imagery. She began using the hand-bird during her thesis work at UM to explore her own identity. Her mother is Crow, but her father is not, and so she doesn’t meet the requirements to enroll in the tribe. The Crow’s name for themselves, Apsáalooke, translates to “Children of the Large-Beaked Bird.” The smaller bird became a kind of “self-portrait.”

“It was really cool to hear from other people who have similar experiences to me, living in mostly white place,” she said, adding that “it feels really minimizing when people say there’s no diversity in Missoula cause there is, it’s just been overshadowed by settler colonialism.”

She’s excited to have a public space this large to populate with her favorite colors and imagery.

“It’s just awesome to have space, and as a person, I’m pretty soft-spoken, and it’s really empowering to have art that I can use to amplify my ideas,” she said.

“These conversations were centered around being multi-racial and that inner identity conflict,” she said.

They’re planning on posting the bulk of the interviews on the ZACC website.

“I think there’s a lot of self-discovery talking to other people that have these similar identity problems within themselves that I didn’t know that other people had,” she said.

Werle, who grew up in Helena and whose mother is Filipino, said that growing up in a majority-white culture poses those issues.

“Being biracial, you’re not ever equally two things. Some days you feel more of one thing than the other.”

She said her work frequently features hands as characters to carry a narrative — for this piece, a massive hand extends a finger to a much smaller one — two identities in conversation. The diminutive hand is perched on top of a Wilma-like building. Since the theme is “feeling welcome,” she mixed in Missoula references in addition to cool-toned mountains and an “M” reflected in a river.

The mural wall won’t be complete until next spring, when Bozeman artist Cristina Marian can come to Missoula to add her piece, which is influenced by the cultures of the local refugee community.

While the “opening” won’t be until First Friday in June, the artists will share process and interviews from their projects on zootownarts.org.