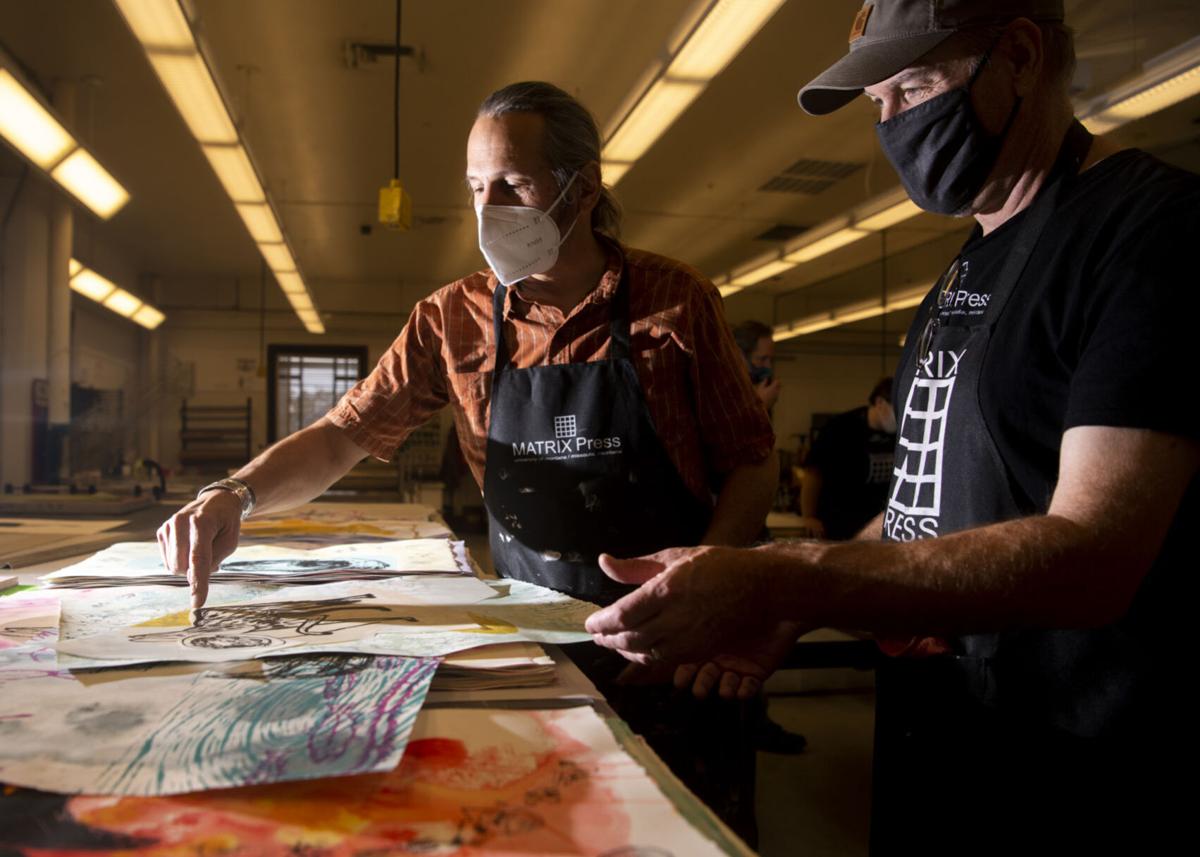 Neal Ambrose-Smith, an art professor at the Institute of American Indian Arts in Santa Fe, visited the University of Montana to work on a residency with the Matrix Press. 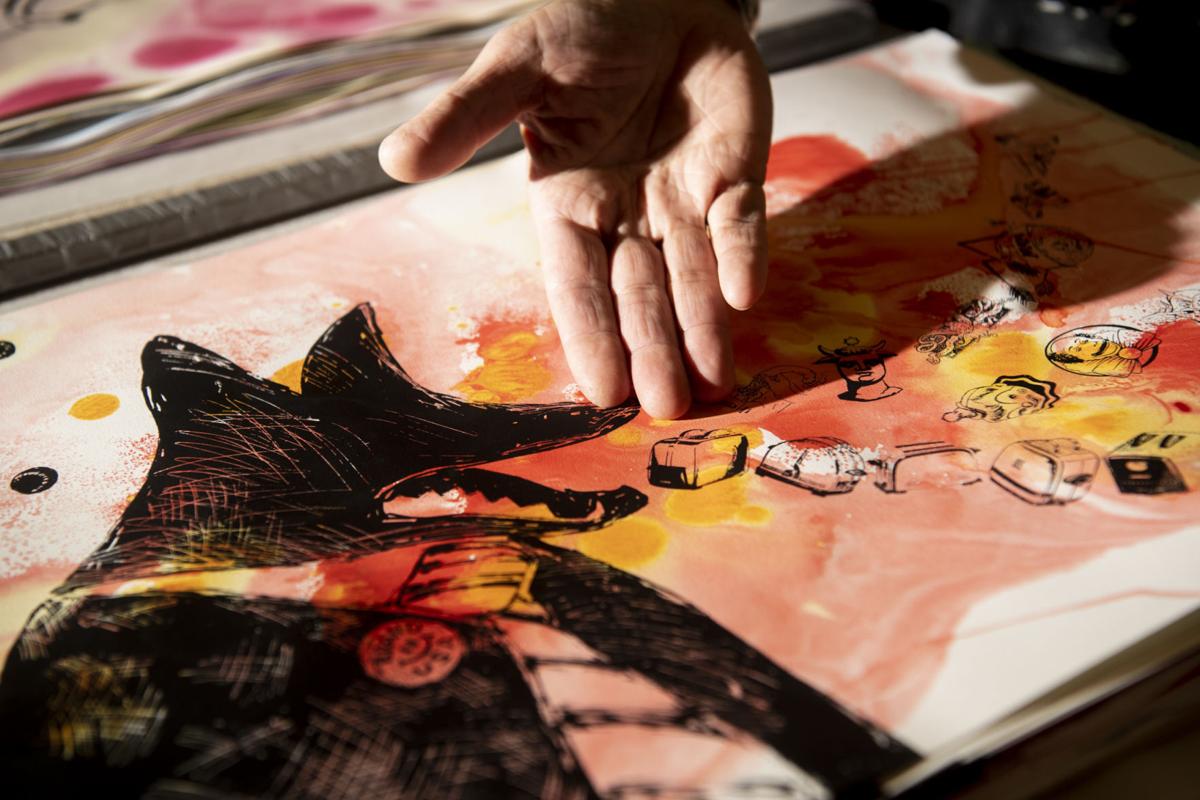 In the studio at UM, he talked about the joy of working with students on prints that are a collage of time periods and points of reference. 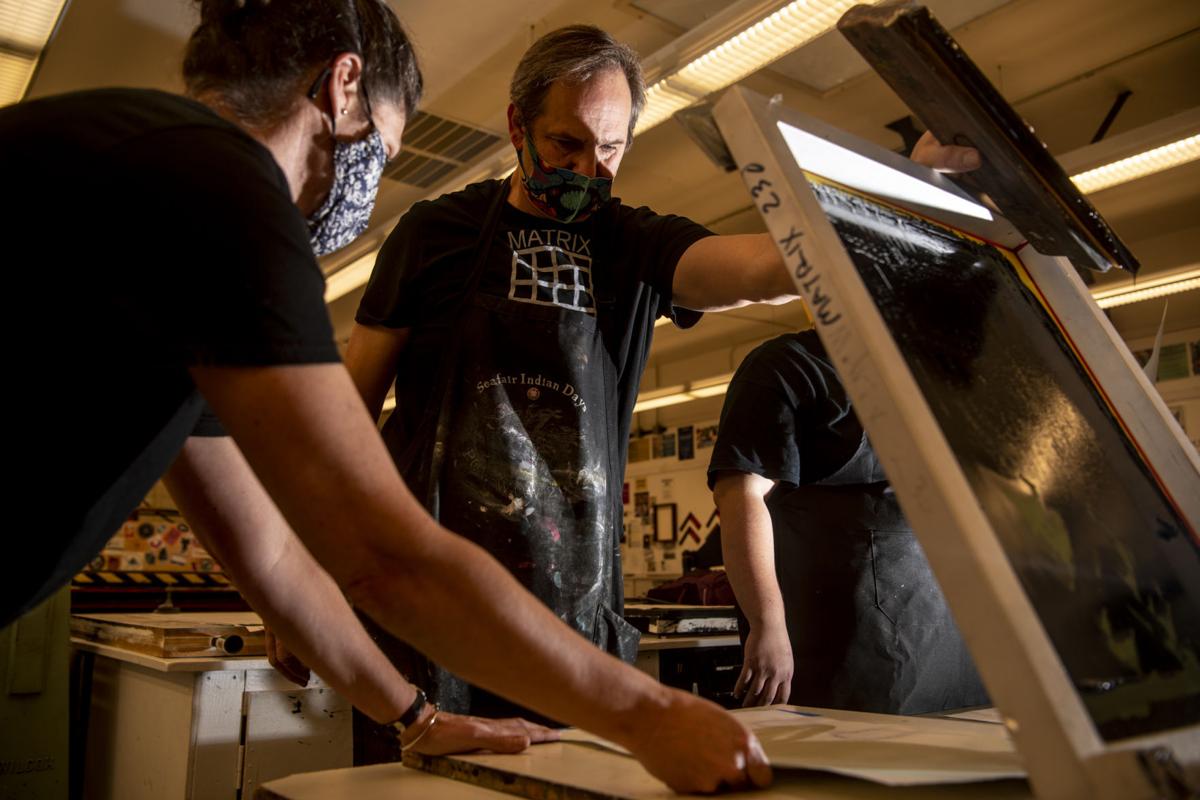 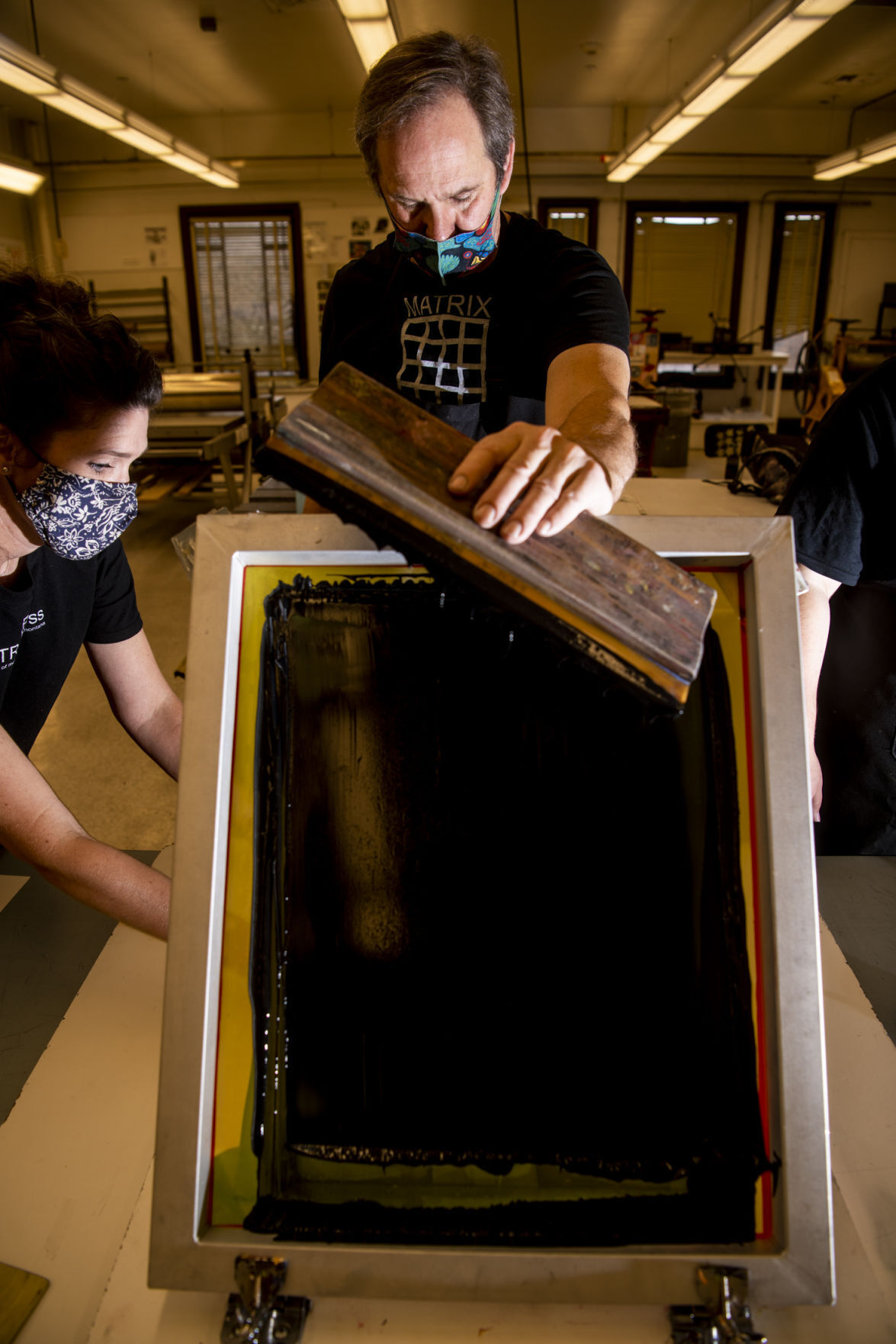 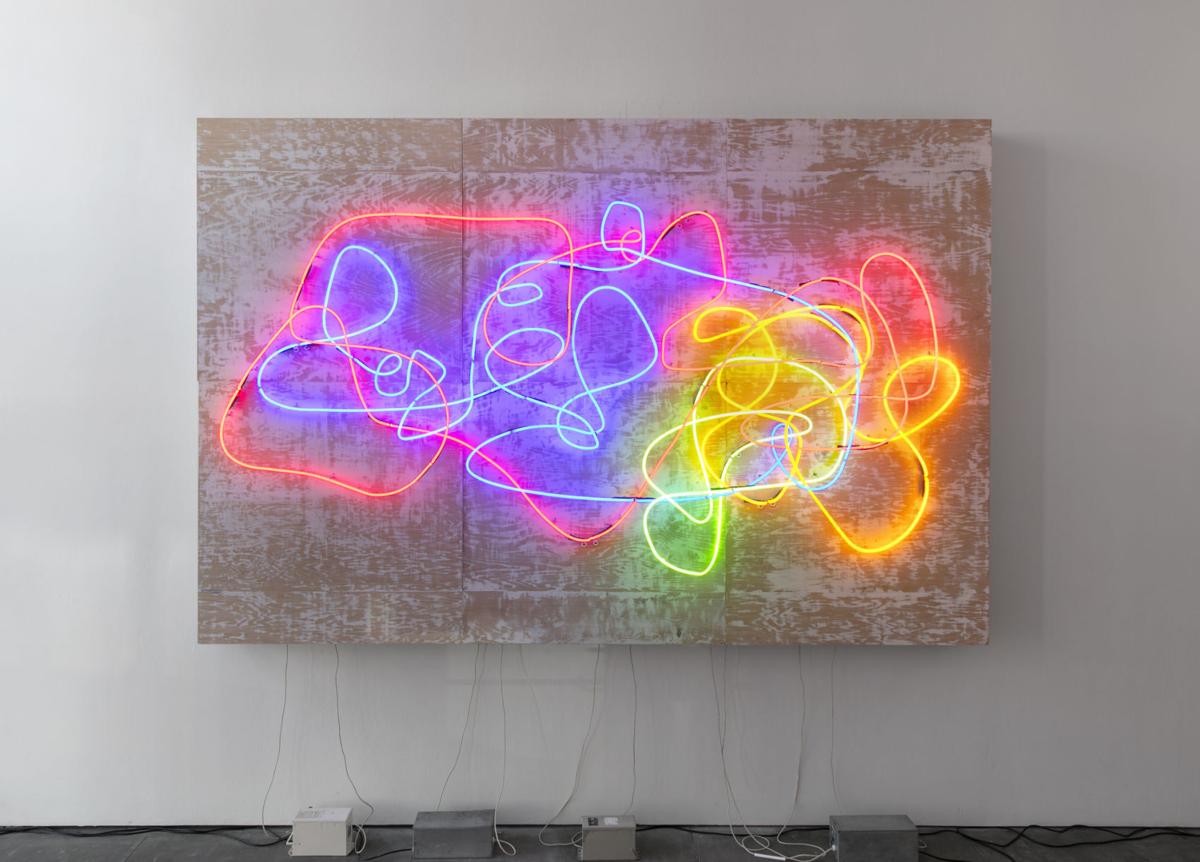 Neal Ambrose-Smith, an art professor at the Institute of American Indian Arts in Santa Fe, visited the University of Montana to work on a residency with the Matrix Press.

In the studio at UM, he talked about the joy of working with students on prints that are a collage of time periods and points of reference.

Neal Ambrose-Smith doesn’t believe you can create from scratch.

“It’s gotta come from somewhere, and I have no problem with that,” he said.

Ambrose-Smith, an art professor at the Institute of American Indian Arts in Santa Fe, visited Missoula last week to work on a residency with the Matrix Press at the University of Montana and for his exhibition at Missoula Art Museum, which includes a Salish and English title, “č̓ č̓en̓ u kʷes xʷúyi (Where Are You Going?)”

“Everything comes from somewhere. Nothing comes from nothing. You can’t make artwork in a vacuum,” he said. “You’re always influenced by the world around you and the research that you do.”

‘Where Are You Going?’

The pieces are on view in the museum’s Frost Gallery, which is dedicated exclusively to contemporary Indigenous art. Ambrose-Smith is Flathead Salish, Metis, and Cree, and a member of the Confederated Salish and Kootenai Nation.

The show includes mixed media prints, paintings and a floor-to-ceiling neon installation and draws on abstract painting, text, found imagery, and pop culture. They address a sense of confusion and entrance into unknown territory, sometimes with direct references to Star Trek.

“You see a lot of the same repeated imagery,” said Brandon Reintjes, the MAM’s senior curator. He thinks the show has the feel of an aggregator website, with information from hundreds of sources.

The exhibition works were all made after the 2016 election and reflect his disappointment. After two terms under Obama, he "really was shocked by it.”

The title piece, “č̓ č̓en̓ u kʷes xʷúyi (Where Are You Going?)” stretches floor to ceiling, 10 feet tall and 15 feet wide. It’s like an abstract drawing transferred into neon — four lines in red, yellow, green and purple loop around a wooden backdrop. Set to a timer, they brighten and dim in sequence, eventually leaving only green.

“I’ve been practicing my scribbling like crazy, because I love to scribble,” he said. As he worked on it, he began to see its content as cultures and separation.

While neon at close range might seem overwhelming, he’s happy that the effect is pleasant and somewhat hypnotic. It’s a piece that draws you to want to sit on the bench and soak it in.

“It’s really soothing. That changing light is like the sun coming through the leaves and the trees, how it moves through the sky … things are always changing,” he said.

The prints and paintings are united by repeated motifs. Lewis Carroll’s Alice has in some cases seemingly merged into a Rabbit character as well. He does love scribbling, too. The squiggles in the neon sculpture are also in the paintings. It’s sometimes difficult to tell whether imagery is appropriated or only feels that way, said John Calsbeek, the MAM’s senior curator. There’s a sense that he's throwing in “everything he knows” and everything he’s learned about.

In one of the larger paintings, “Get in the Relief Pod,” (7 feet by 8 feet) the Starship Enterprise hurtles through a vortex of imagery — abstract brushwork, a mesh of what could be Spirograph drawings, all swirling around in zero gravity with what looks like vintage imagery of a headdress, vintage trailers, clothing irons, a clown face and more.

The edges of the canvases are covered with text he’s culled from SkyMall magazine, alternating light and dark in a long run-on sentence — “all art is fake,” “the politics of instability”, “resculpt lands,” “high brightness means high impact,” "get in the relief pod," and on and on.

Blacklight paint and 3D goggles aren’t that common at the MAM, but Ambrose-Smith wanted to add an element of excitement for kids who visit through the museum’s Fifth-Grade Art Experience, and when the lights are dimmed you see even more imagery loaded onto the canvas.

In one of the show’s large-scale prints, “The Story Teller,” a hand-drawn Coyote is seated in a chair, dressed in a suit, legs crossed, pipe in hand. Appropriated images of trailer houses, headdresses, clothes irons, a clown and more orbit him like an asteroid belt. Throw on the glasses and it all seems to hover over the bright galactic background.

The smaller-format paintings have more thickly rendered characters and hand lettering. “If I Have to Listen to the News One More Time,” centers on a Coyote/trickster with circles in its pupils, like a character in a cartoon who’s been hypnotized. The bewildered creature appears submerged to its neck in a white and red pool. Chaotic red brushwork looms above like ominous weather. (For context and speculation’s sake, the piece is from 2019.)

Ambrose-Smith’s mother is Jaune Quick-to-See Smith, a member of the CSKT from the Flathead Reservation. She broke ground for Indigenous artists and women artists starting in the 1970s, not only through her own work but curation. She’s also the first Native painter whose canvas was purchased by the National Gallery of Art.

Ambrose-Smith said that when his mother was finishing her bachelor’s degree, they couldn’t afford child care, so he went to art classes with her and followed along. “I took ceramics, I was in painting, I was in drawing, and you know, I just sat there and did what everyone else was doing,” he said.

He also worked with her on her archives and in her studio. Their house was a stopover for innovative artists like Joe Feddersen (Colville) and more, and her work has influenced his thinking and imagery as well.

The visit was paid for with a grant from the Warhol Foundation for Matrix and the museum to fund projects like this. Prior visiting artists through the grant include Sara Siestreem, Lillian Pitt, Molly Murphy-Adams, Melanie Yazzie, John Hitchcock, Duane Slick and more.

The title in one of the new prints represents dialogue the viewer can imagine, that the Coyote is telling Batman: “So, your grandmother is a Cherokee princess, no kidding?”

“So it’s funny, right, but it tells a story, it talks about something,” he said.

He likes that it has content and conflict but humor, which makes it more open.

“The best stories are about the way we work together,” he said.

Another is straightforward in the joke. Coyote tells Darth Vader, “Search your feelings. Who’s your daddy?”

One piece has images by all three non-student artists — Algonquin images by Clark, a whirlpool by Bailey, while Ambrose drew a Coyote version of Rat Fink in a canoe instead of a race car. The first pass felt too busy, so they decided to try it again, which is easier with a whole crew.

“In my own studio, I spend a lot of time fixing things all the time. Because nothing ever works out. All the best-laid plans, forget it. The title’s gone. The initial idea? Gone, out the window. Things don’t always work out I’ve planned,” he said.

One print sets a black and white Coyote coughing up clip art designs against a washy background of tangerine and yellow washes, drips and runs that the students came up with.

He loves using well-made appropriated images and placing them in new contexts to tell a story. The crisply designed clip art comes from Crap Hound magazine, an artist resource that compiles vintage imagery. One piece has the Coyote holding a mask bearing the goofy visage of Alfred E. Neuman, the “what, we worry?” mascot of Mad Magazine. Ambrose-Smith points out that this image itself was appropriated from an old dental ad.

In a different take on the theme, Coyote’s mask bears a parted mouth. He saw it on the wall of the UM print studio — at first he thought it might be from the Rocky Horror Show, but it’s not. It almost could be, though. Or it might call to mind the Rolling Stones’ lips logo.

He's not sure where it came from, only that he liked the way it looked on the print.

“There has to be a bit of fearlessness when you’re making work, and so working here with the students is really great because they … could see it in action, like how it happens,” he said.