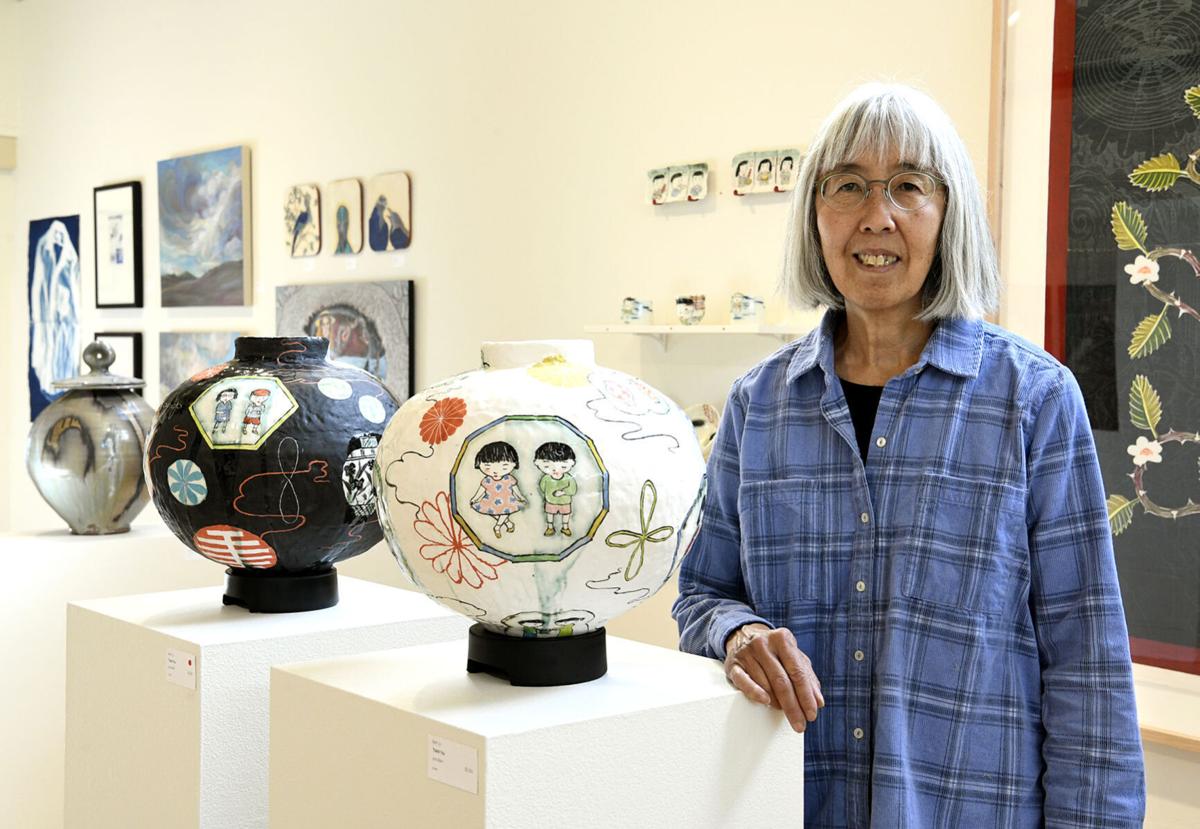 Beth Lo stands with some of her work at a show at Radius Gallery in 2019. 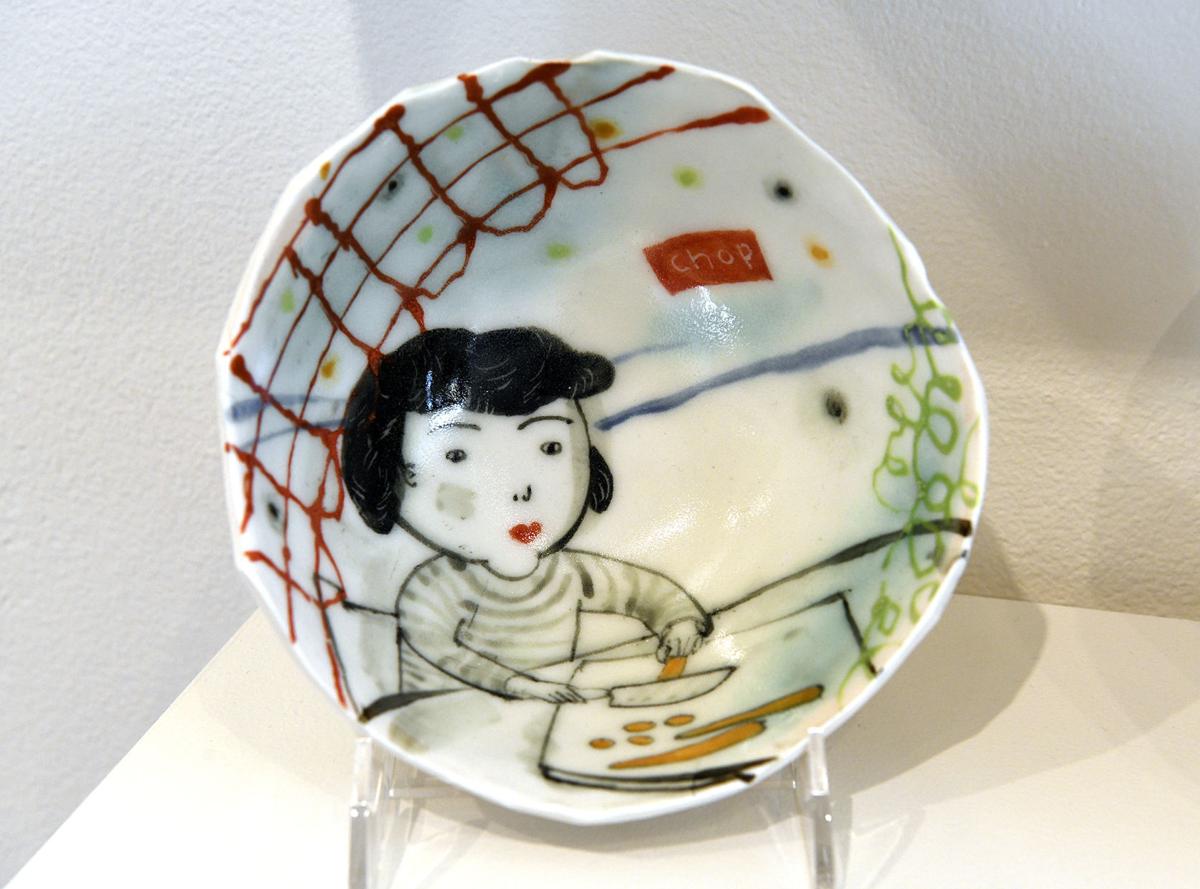 One of the pieces from Beth Lo's show at Radius Gallery in 2019. 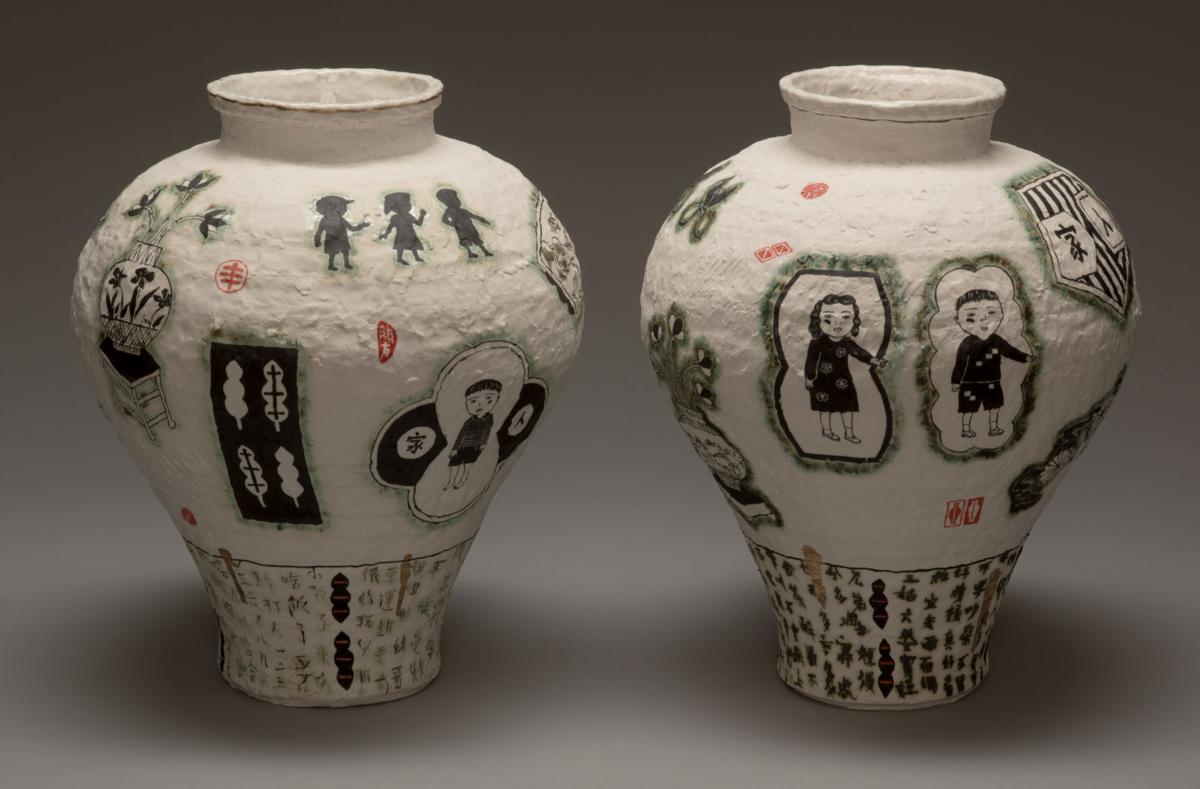 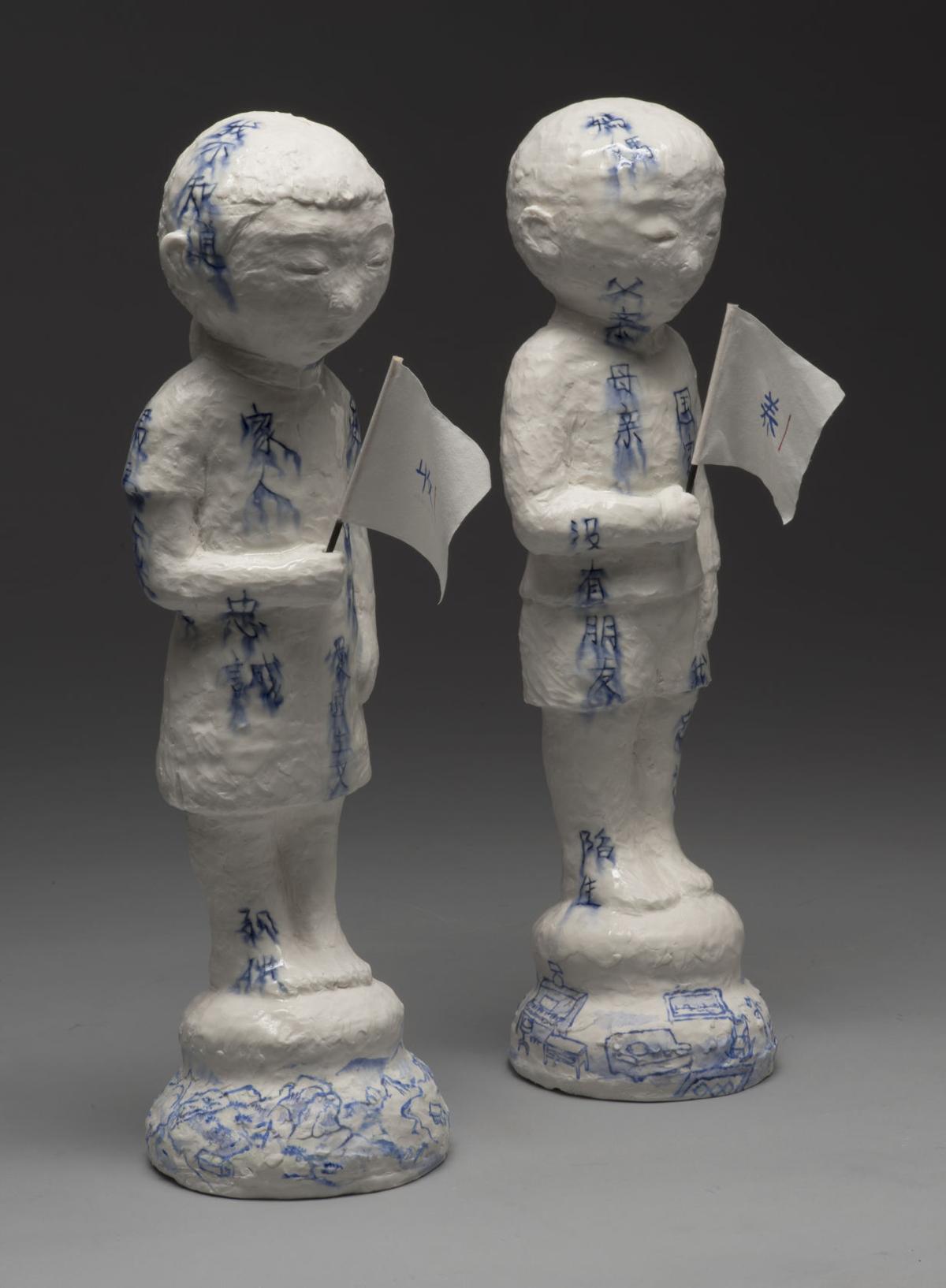 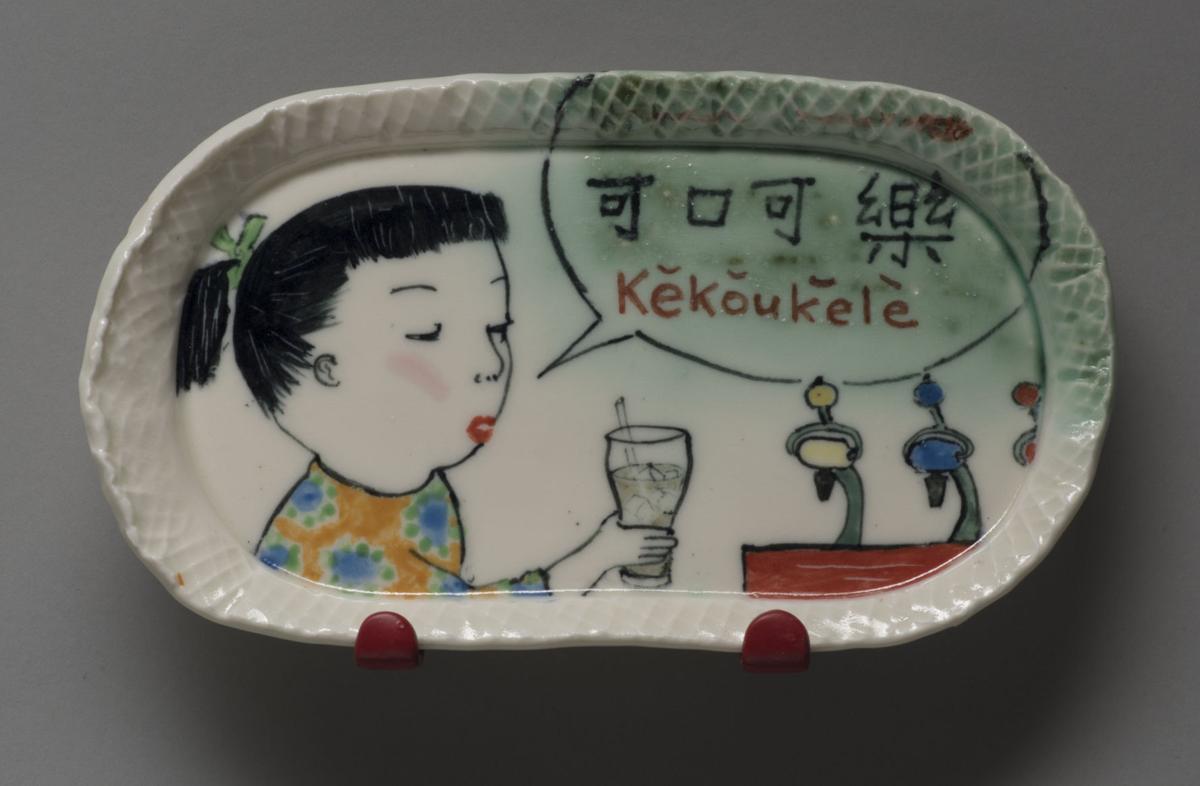 "Learn Chinese: Coca-Cola" is part of her series based on "loan words" that are adaptations of English terms. 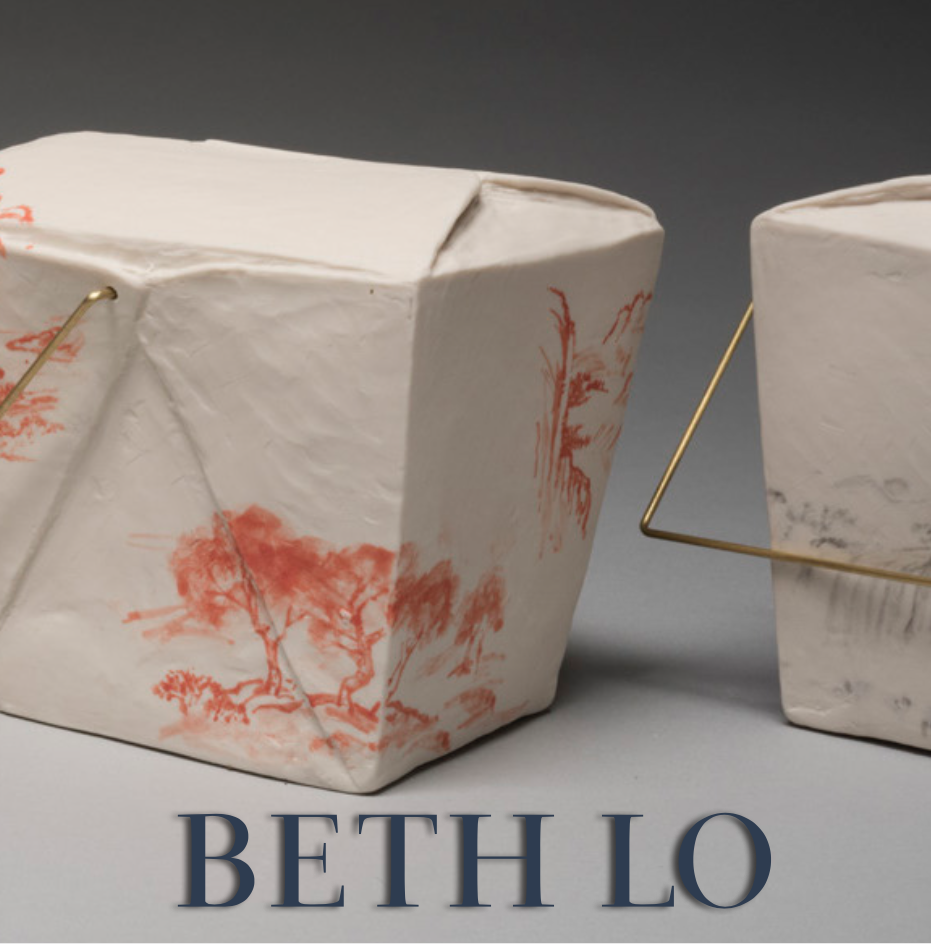 Beth Lo stands with some of her work at a show at Radius Gallery in 2019.

One of the pieces from Beth Lo's show at Radius Gallery in 2019.

"Learn Chinese: Coca-Cola" is part of her series based on "loan words" that are adaptations of English terms.

Beth Lo’s ceramics, with her inviting drawings on their surfaces, can naturally be enjoyed on their own. The interpretation and context in a new book, though, is welcome.

“On pieces like Inheritance Vases II one can find calligraphic brushwork techniques side by side with cartooning line work. The story being told has taken thousands of years to come together on a single vase. There’s something here for everyone — from a Chinese calligraphist in 200 BC to a teenager making comics in their bedroom today,” writes Tahlia Aghily.

Through essays and hundreds of photographs, the self-titled volume (“Beth Lo”) deepens appreciation of the her long career. For those familiar with her, it’s a reminder of her prolific breadth, tracing her many projects spanning from the 1970s to 2020. For beginners, it’s a thoughtful, deep dive with insightful writing in an accessible voice.

The book, published recently by the in-house press of one of her galleries, John Natsoulas Center for the Arts, leans heavily toward images of the art — naturally, the main event — while the themed essays (“Language, Culture, Food and Family,” “Reclaiming Identity”) help illuminate the different facets of it.

As the essays make clear, Lo’s thoughts about cultural identity and family are inseparable from her work, written and drawn directly on their surfaces in images and Chinese characters. The biography sketches out the specifics of a path that led her to build a national career in clay from western Montana.

Lo was born in 1949 in Lafayette, Indiana, to parents who fled instability in China for a new life in the United States. Her father, Hsu Lo, came to the U.S. on a scholarship in 1944. Her mother, Kiahsuang Lo, had a difficult journey — she fled into India with a group of other students’ wives and found passage to America by boat.

Hsu Lo studied aeronautical engineering, and Kiahsuang, physics. Her father completed a doctorate and taught at Purdue University in Indiana, yet they were treated as outsiders — they had difficulty finding housing because of racism.

Kiahsuang taught Beth and her sister traditional calligraphy, grading their work after lessons. She also brought them to a family summer camp for other Chinese people living in the Midwest. (After retirement, Kiahsuang learned traditional brush painting and collaborated with Beth on pieces.)

During her freshman year of college, Beth took a Parks and Recreation ceramics class that eventually led her to the University of Montana for an MFA. She was drawn by the mountains and sense of possibility. She studied under the late, world-renowned ceramicist Rudy Autio, who encouraged her to draw on the surfaces of her pots, which set her on a path she’s still exploring to this day. After co-founding a collective, Art City, in Hamilton, she returned to UM after Autio retired and spent three decades there, stepping down in 2015 and steadily producing new work since.

Some of imagery that makes Lo’s work identifiable across a room came to her after the birth of her son, Tai. Thoughts about parenthood, raising children, the innocence of that age, eventually commingled with Chinese social realist posters depicting model youths. (Some of her lettering is rooted in trips to China and the graffiti style she saw there.)

Agihly summarizes the particular charm and appeal of the approach:

“Lo’s pieces are simple, colorful, and bright, thereby enveloping us into the safety and simplicity of childhood. Her work veers towards simplicity with reductive forms, simple color palettes, and common imagery. … The intentional vagueness allows the piece to present the universal qualities of humankind,” she writes.

The section on “Water” includes images of an installation, “Breathe,” made for a 2013 Gyeoneggi International Ceramics Biennale in South Korea, where her more allegory-like sculptural figures with papier-mâché seeming texture were used.

The career survey extends into the present, with timely pieces from 2016 onward.

One of the surprises you’ll find halfway through are a series of “COVID-19 trays” in which Lo puts her educationally-themed “Good Children” imagery toward timely instructions. Figures demonstrate masks, picking up takeout, social distancing, cleaning surfaces, and washing their hands before eating. (One, in which two characters point fingers at each other, alludes to “the blame game” and former President Donald Trump.) The trays are delightful in a way that few pieces of pandemic-related artwork are, despite the dissonance between the simplicity of the steps to prevent the spread of disease and America’s own struggles with them.

While innocence is key to the child images, they are not always shielded from the harshness of reality. Some pieces confront gun violence and xenophobia.

You can get nice insights into other work made in 2019-20. In a new series, “99 Years,” Lo made slip-cast porcelain Chinese food boxes and decorated them with traditional landscape imagery copied from her mother’s paintings — the piece pays tribute to Kiahsuang Lo and the title is drawn from her age when she passed. “To Go: USA/China,” comprises two of these boxes, one with the outline of the United States and one of China painted around two sides. Set close together, the countries merge.

As Rebecca Romani writes in the introduction, Lo's work is personal and specific, yet ultimately leaves the audience with encouragement to look inward in more ways than one.

“Her art is a dialogue between herself and the viewer — and a way of encouraging others to think about their own heritage and family background, inspiring people of all ethnicities to become comfortable with and accepting of what might otherwise be perceived as ‘foreign’ or ‘other.’ ”