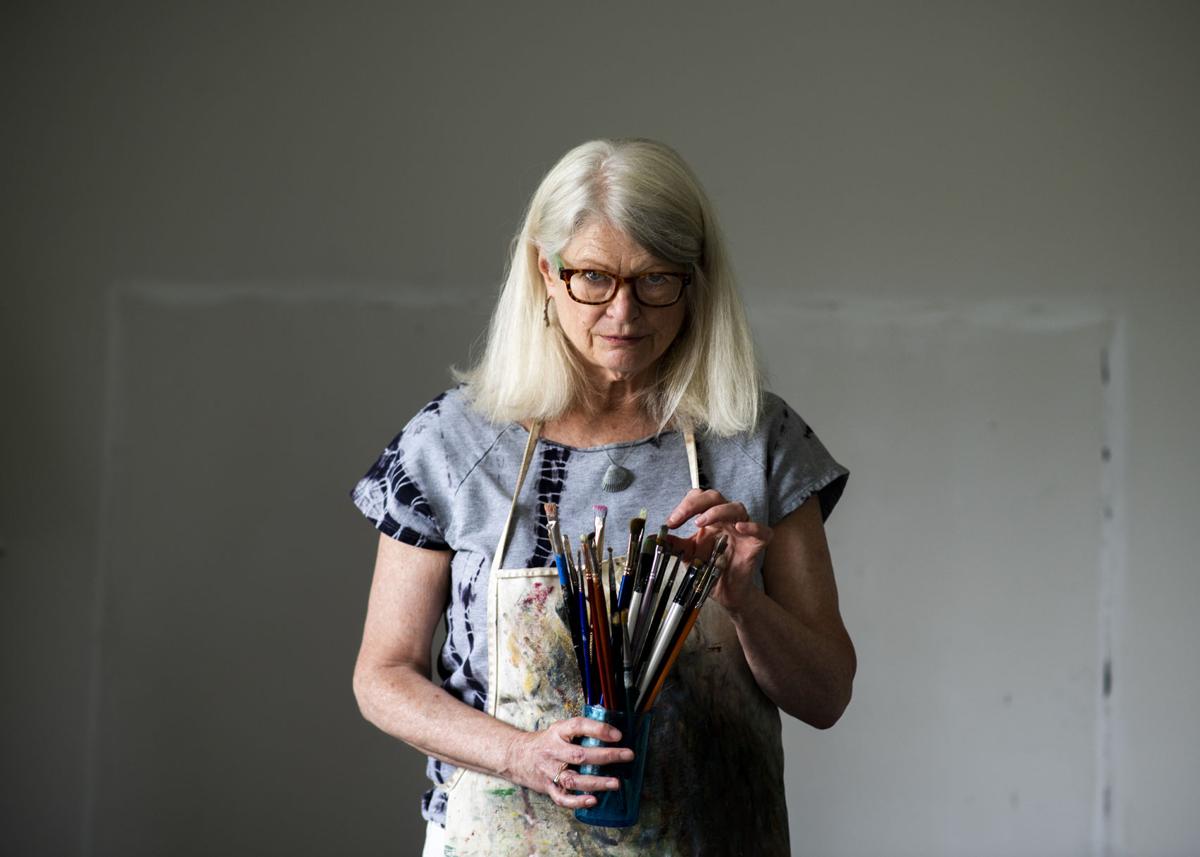 Kathy Herlihy-Paoli, an oil painter, is one of the creators in Open AIR, Artist in Residency Program, this summer at the Historical Museum at Fort Missoula. The program is designed to put artists in unique places throughout western Montana. 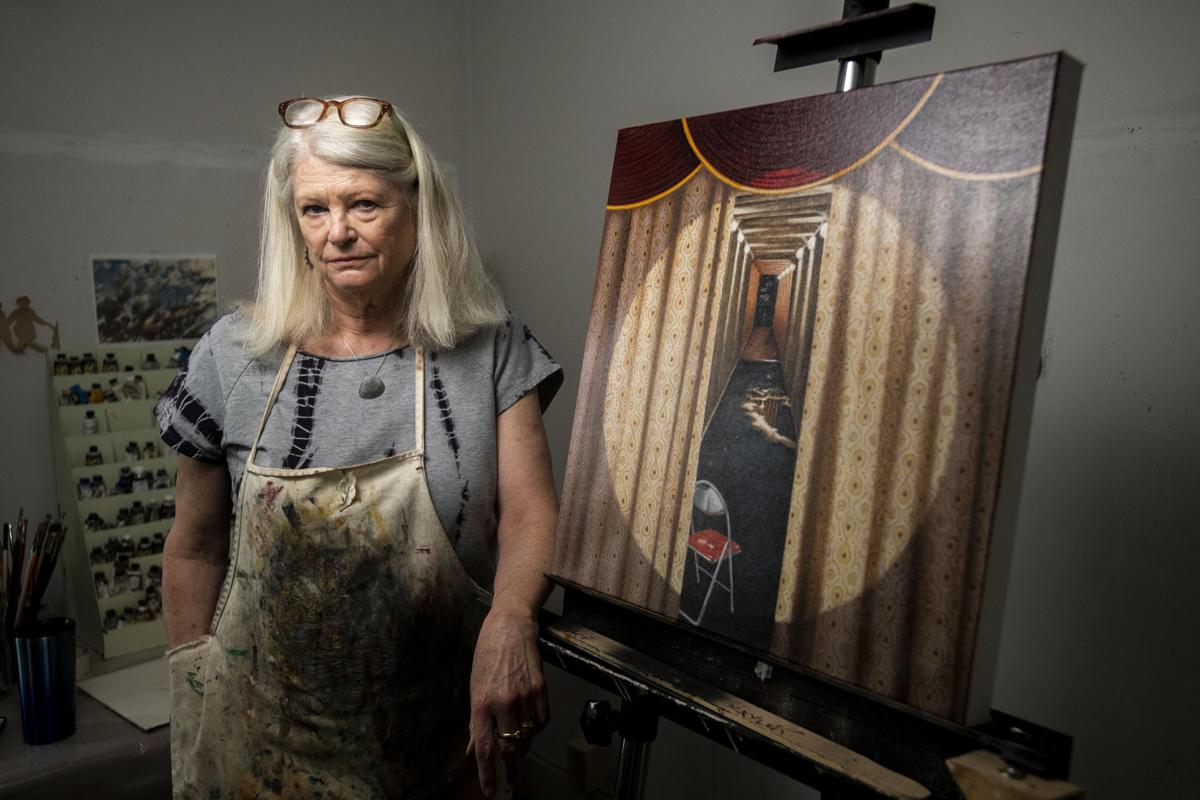 Kathy Herlihy-Paoli said much of her work is derived from personal experience with loss as well as political issues relating to water and water rights. 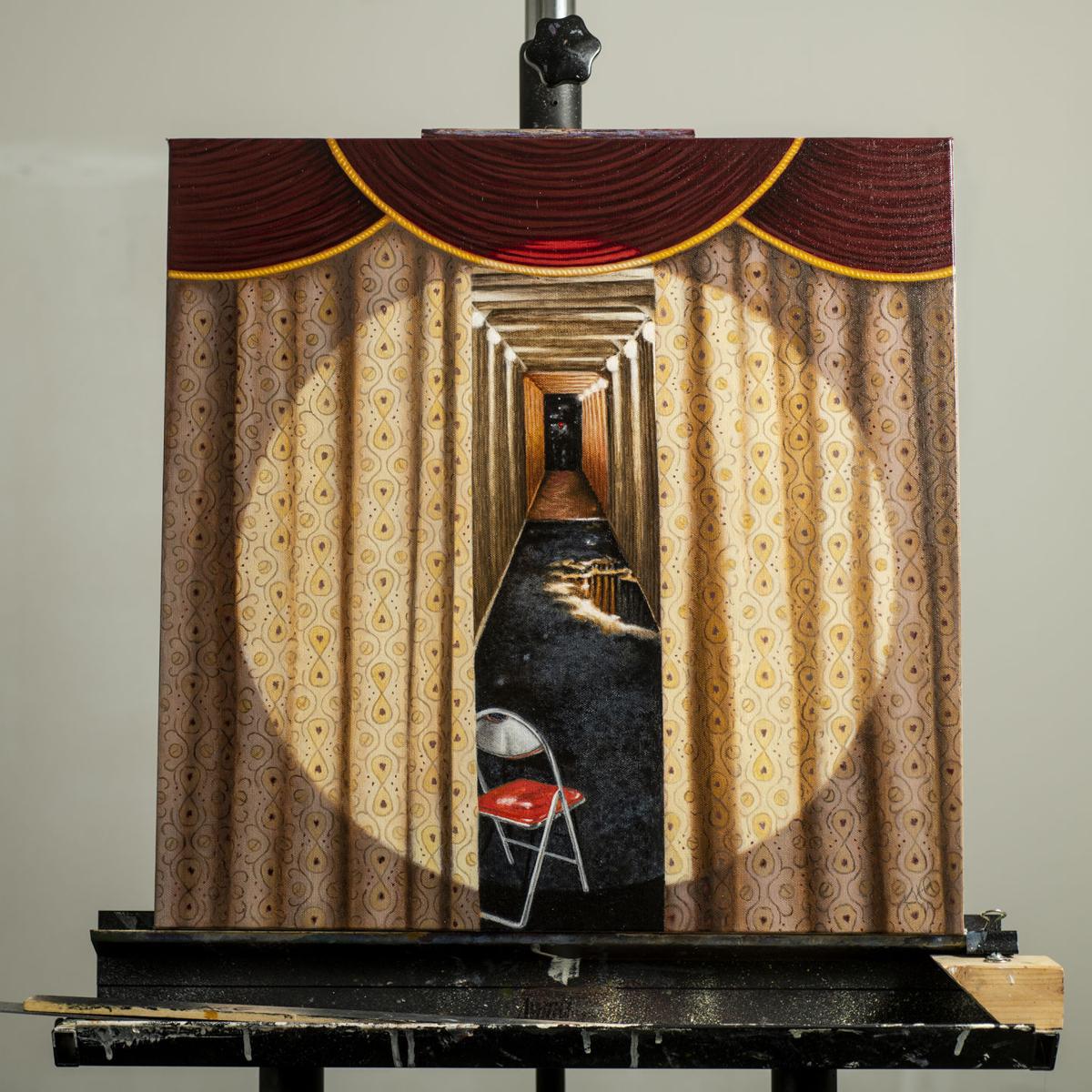 Herlihy-Paoli's piece "Opening Up" depicts a construction walkway in front of Radius Gallery on Higgins Avenue. 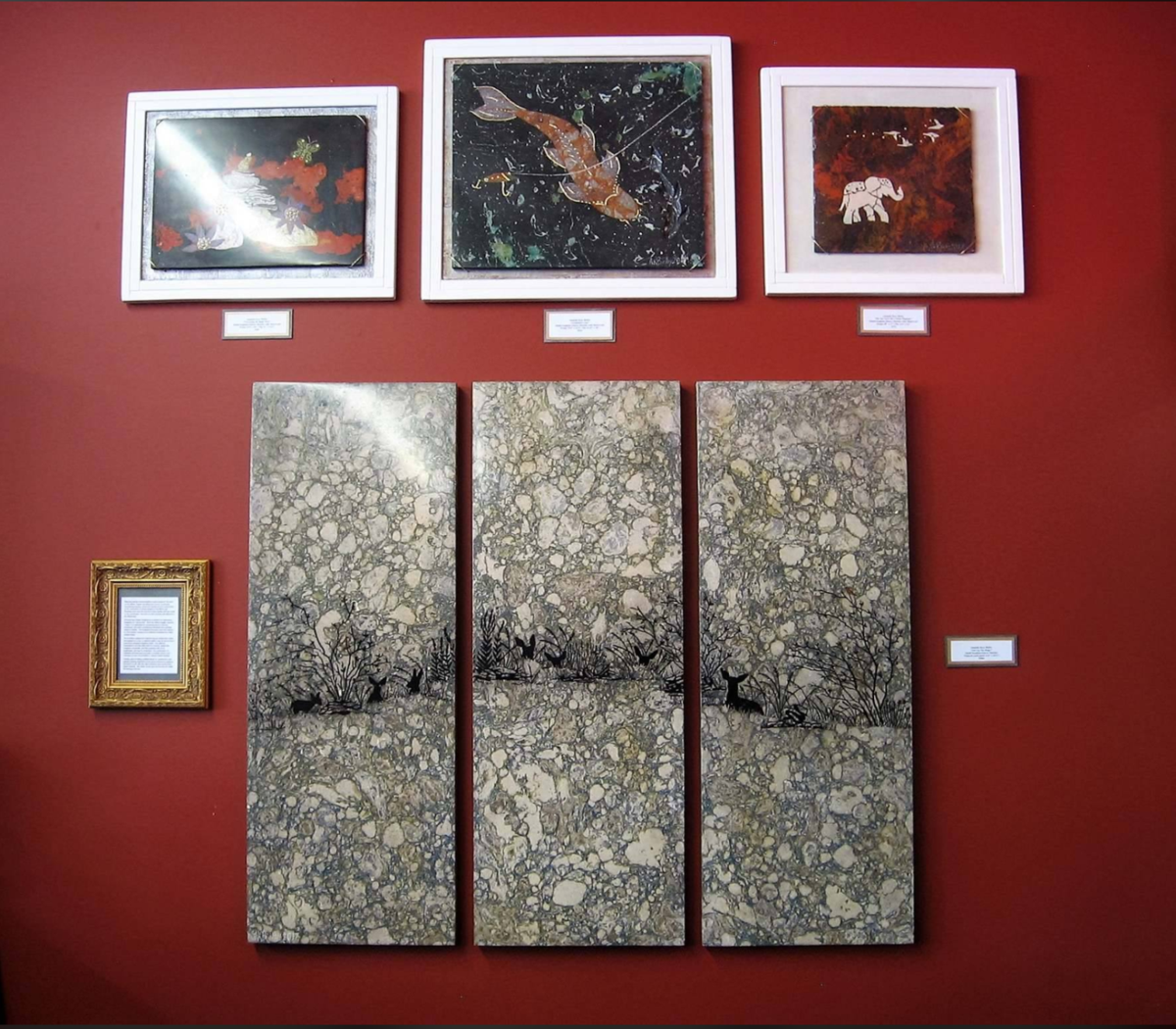 Amanda Bielby uses industrial painting and decorative techniques she learned in the building trades. These pieces use an inlay scagliola, a 16th century technique to mimic stone and marble.

Kathy Herlihy-Paoli, an oil painter, is one of the creators in Open AIR, Artist in Residency Program, this summer at the Historical Museum at Fort Missoula. The program is designed to put artists in unique places throughout western Montana.

Kathy Herlihy-Paoli said much of her work is derived from personal experience with loss as well as political issues relating to water and water rights.

Herlihy-Paoli's piece "Opening Up" depicts a construction walkway in front of Radius Gallery on Higgins Avenue.

Amanda Bielby uses industrial painting and decorative techniques she learned in the building trades. These pieces use an inlay scagliola, a 16th century technique to mimic stone and marble.

How does a specific place and its history reveal itself through art? Creators are delving into that question around western Montana this summer, as the Open AIR, or Artist in Residency Program, starts its summer season.

To Kathy Herlihy-Paoli, an oil painter, the backstory of internment and archives at the Historical Museum at Fort Missoula will stir new work in her series, in which she frames myriad subjects on a stage, bounded by curtains. For Amanda Bielby, the removal of the Rattlesnake Creek Dam and the restoration of the environment mirror her own path. A lifelong house painter and laborer, she studied her craft and moved on to projects like the Wilma's new ceiling or columns at the Missoula County Courthouse. The hard physical work took its toll on her physically and mentally, and she's begun pursuing visual art that has literal restorative effects (she re-uses old materials) as well as emotional ones.

Open AIR is designed to "connect artists with unique sites in western Montana," and to offer an "exchange between artists from outside and inside" Montana, along with its residents, said director Stone Samsoe.

Samsoe and fellow artist Hadley Ferguson founded the nonprofit program, and launched it last year, bringing artists from around the U.S. to sites here for sessions in the spring, summer and fall. While they had more than a hundred applicants for the coming year, COVID-19 forced a change: Montana artists only, with a few exceptions. Samsoe said it was a way to "reduce the flow of people" traveling and "double down" to support local communities.

Starting last week, 13 artists began acquainting themselves with their chosen places and their host organizations, which include the University of Montana's Flathead Lake Biological Station, the Historical Museum at Fort Missoula, Home ReSource, the Moon-Randolph Homestead, Rattlesnake Creek Dam, the Selway-Bitterroot's Paradise Guard Station, and the Montana Museum of Art and Culture. Once it opens, an artist will also be placed at the new Missoula Public Library.

One new site for the summer season is Philipsburg, where Jules Lucero will have free rein of an entire historic mining community. Also later in the summer, Cristina Victor will visit the Montana Museum of Art and Culture to lead students in one of her specialties: vexillology, or the study of flags. Her visit was originally scheduled to coincide with an Olympics-themed exhibition at the MMAC. With the summer games postponed along with the exhibit, they decided to bring her to town anyway.

While Open AIR usually involved artist lunches where you could hear about their work and the sites, this season they've switched to socially distanced talks with registration required on openairmt.org. The artist's final products, too, won't be shown physically in a gallery show until perhaps sometime next year. In the interim, Samsoe said they're looking at options for an online exhibition, or videos where artists talk about their process.

When artists apply, they can choose three sites, and jurors and site partners help decide who would be a good fit.

Herlihy-Paoli only wanted one: the Fort.

For the past number of years, Herlihy-Paoli has been working with a motif: a stage and set of curtains, at the center of which she can frame any number of images. It began with the personal — she'd gone through some health struggles and decided that she wanted to spend the last phase of her life focusing on art above all else. Her exhibition, "Act Three," was selected as a traveling show through the Montana Art Gallery Directors' Association. It was exhibited at the Missoula Art Museum and will travel to larger cities around the state through next spring.

Her subject matter broadened past the personal awhile ago. At the Fort, she wants to learn more about the experiences of Italian-Americans and Japanese-Americans who were interned during World War II. She's not sure how her project will play out, but she's curious about ways to "try and recognize cultural gifts," or "things from other cultures that we've appropriated that are part of our lexicon now," with food being a major example.

"I was happy to get time to reflect," she said, and think about "our culture at large, and how we accept or don't accept other cultures," especially given the current anti-racism movement. The curator, Ted Hughes, has already been helping her with information and access to resources.

Coincidentally, she'll be set up at the fort's T-1 Building with two artists, Courtney Blazon and Carrie Richer, who all are connected. Richer curated exhibitions for both of them from a previous job in Wyoming.

Bielby's connections to the stream and dam are layered. Her abstract mixed media paintings depict river rock, fish and vegetation. She and her husband own riverbottom property that they're trying to restore, so observing that work in the Rattlesnake will be beneficial, she said.

The area will undergo a "rebirth" that she identifies with closely. She's also "trying to heal," along with the creek. She makes her art using techniques she learned in labor-intensive house painting and decorative work. She used old techniques to faux-painted columns in the courthouse, and matched new wood to existing wood. She painted the murals and pinstriping on the ceiling of the renovated Wilma theater.

It's taken a toll, such as painful arthritis in her back and shoulders. Those projects gave her the confidence to pursue her personal artwork into a career while satisfying her "passion to build and heal."

She takes industrial materials from that other work, or goes to Home ReSource, and melds the industrial into natural imagery, such as silhouettes of plants made on the site. She's studying the work at the dam and sees more opportunities to think about ways we need to "make a better environment for ourselves and others," she said.

To learn more and see a schedule of artist talks, go to openairmt.org.