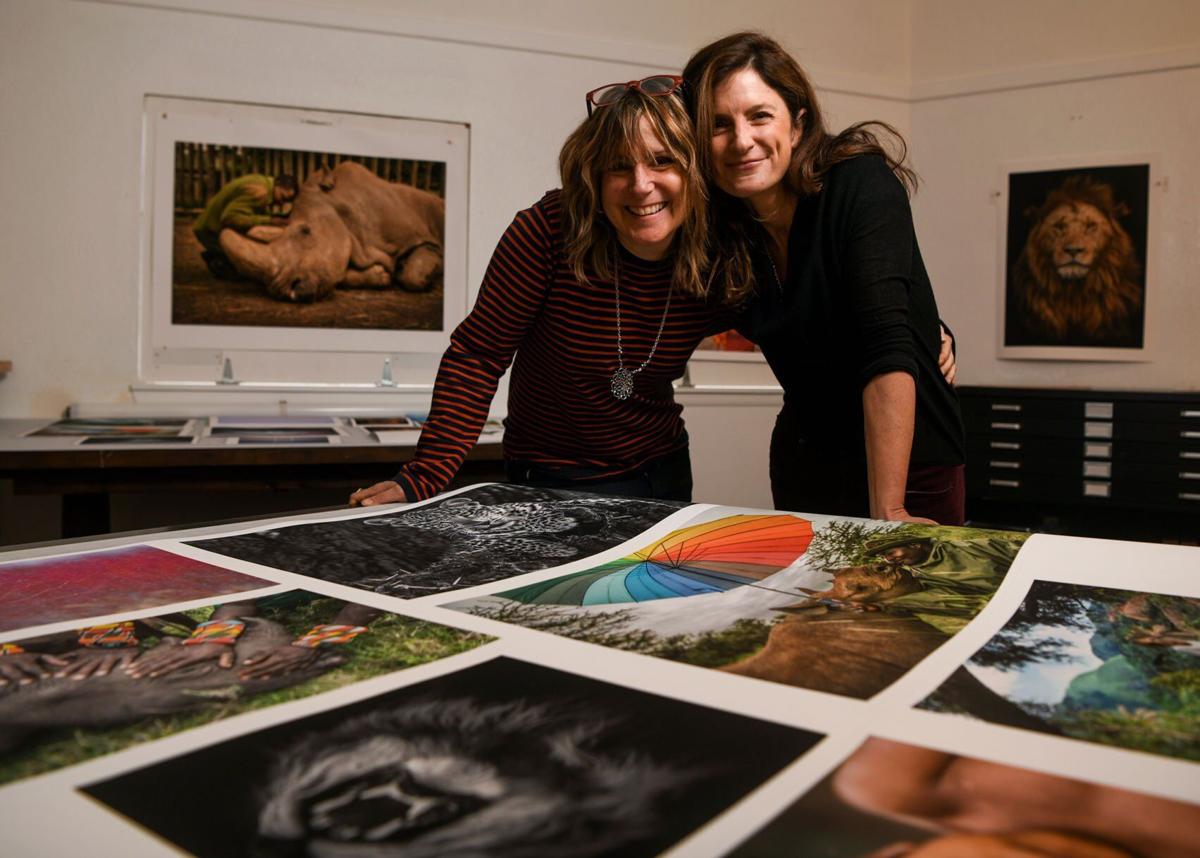 Ami Vitale, a local resident and National Geographic photographer, and Marcy James, founder of Paper and Ink Studio, are collaborating on a print sale fundraiser for environmental groups. 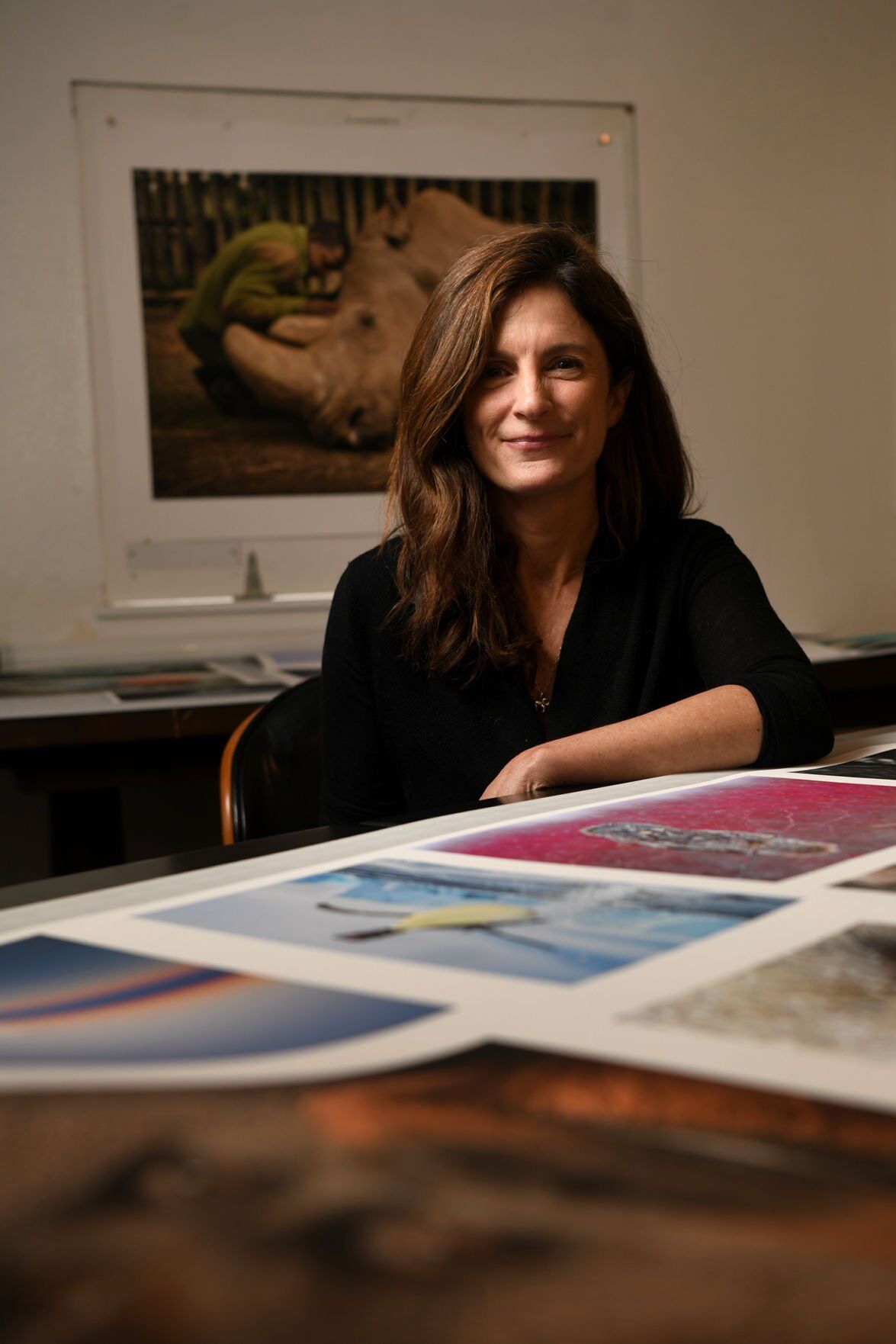 Ami Vitale's nonprofit, Vital Impacts, has raised $425,000 of the ultimate $1 million goal for the print sale. 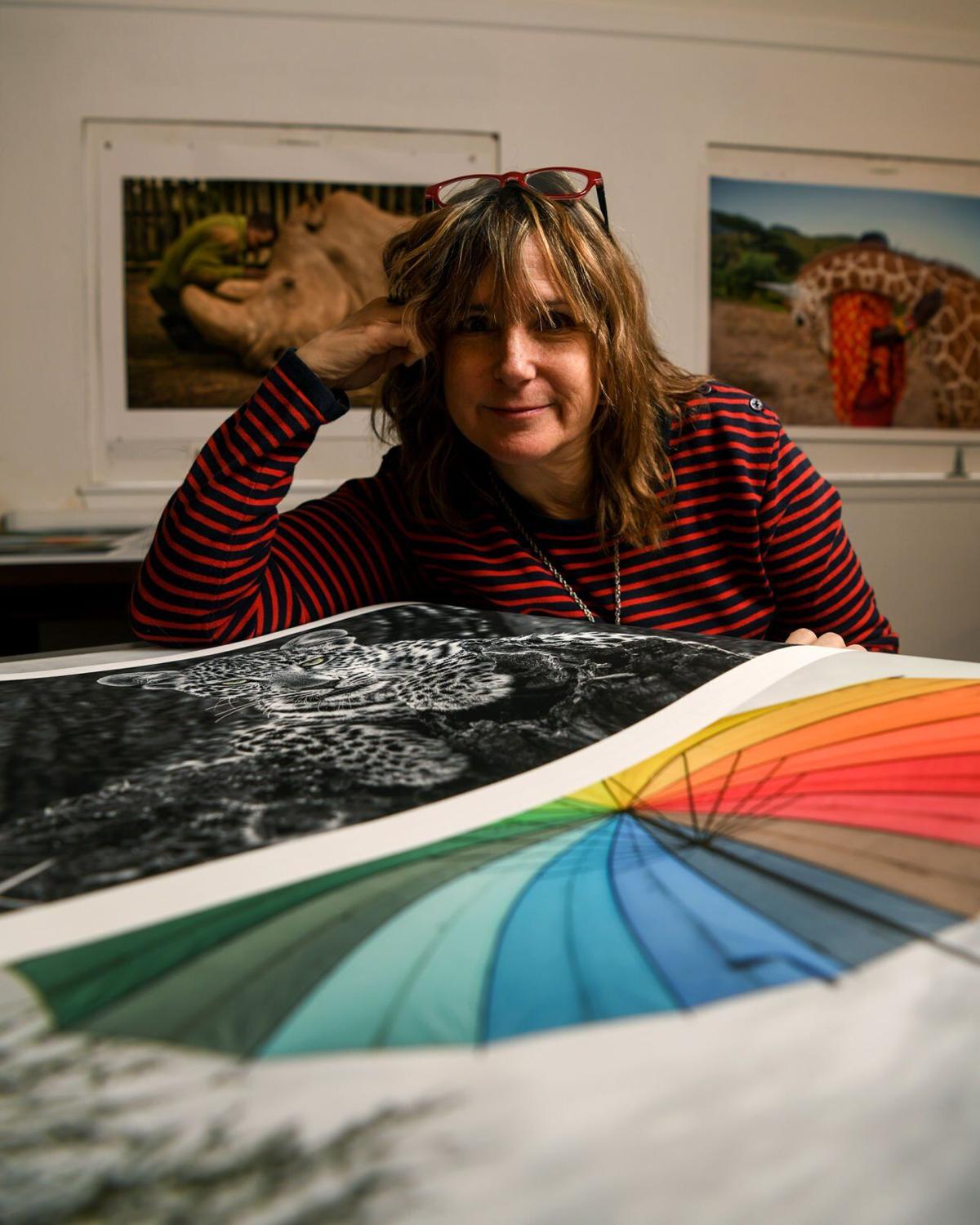 Marcy James' Paper and Ink Studio is responsible for making the high quality prints used in the sale. 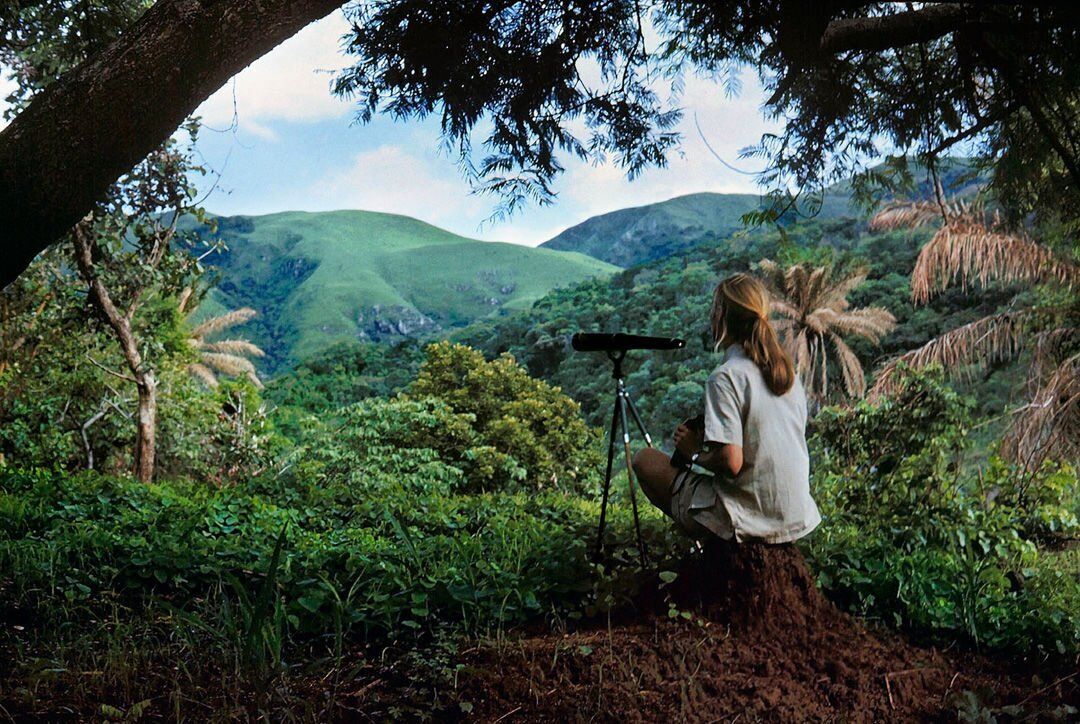 Jane Goodall contributed this self-portrait, taken in the early 1960s. 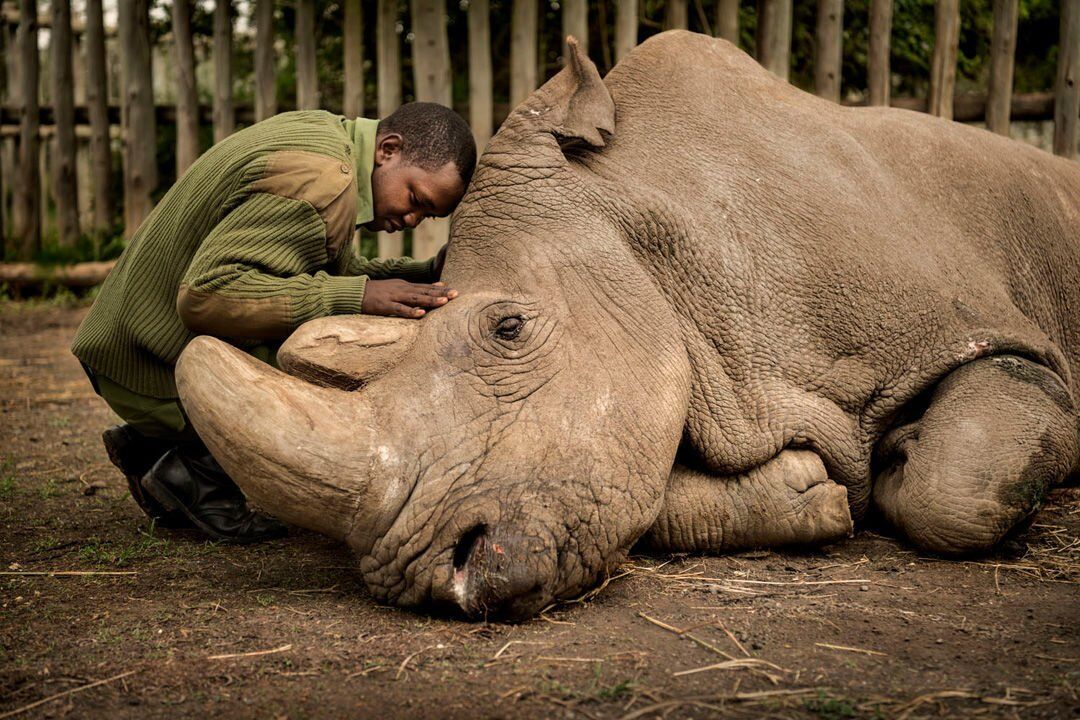 Ami Vitale photographed the last male Northern white rhinoceros as it lay dying in 2018 in Kenya.

Ami Vitale, a local resident and National Geographic photographer, and Marcy James, founder of Paper and Ink Studio, are collaborating on a print sale fundraiser for environmental groups.

Ami Vitale's nonprofit, Vital Impacts, has raised $425,000 of the ultimate $1 million goal for the print sale.

Marcy James' Paper and Ink Studio is responsible for making the high quality prints used in the sale.

Jane Goodall contributed this self-portrait, taken in the early 1960s.

Ami Vitale photographed the last male Northern white rhinoceros as it lay dying in 2018 in Kenya.

A fundraiser for environmental groups that boasts gorgeous images shot around the globe by some of the best photographers around is based right here in Missoula.

Ami Vitale, a local resident and National Geographic photographer, captured a historic photograph that you’ve likely seen. In 2018, she rushed to Kenya to get pictures of Sudan, the last male Northern white rhino. He lies on the ground while one of his keepers, Joseph Wachira, gently leans on him, forehead to forehead, as he dies.

The relationship between humans and animals glimpsed within is a potent reminder of “our interconnectedness,” Vitale said.

“It's not just the loss of the species, it's a loss of humanity really. It's the loss of wonder, when we don't start to see how important they are to our own survival,” Vitale said.

The print sale, which ends on Dec. 31, is an effort between Vitale’s nonprofit, Vital Impacts, and Paper and Ink Studio founder Marcy James. All of the images are on Vitalimpacts.org, where you can also learn about the photographers. They’d raised $425,000 as of last week, and have a goal of $1 million.

The images she’s gathered for the fundraiser all portray or allude to our ties to nature.

“The one thing that connects all the photographers is a shared commitment to the environment. They are understanding the crisis that we are now in, and they address it in their work in some way,” Vitale said.

Through her professional network, Vitale recruited world-class creators — and conservation icon Jane Goodall — to contribute shots that James prints at her shop. A photographer herself, James’ pictures have been exhibited at the Missoula Art Museum, and she’s produced prints by other artists for display at MAM, the Montana Museum of Art and Culture, and more.

Vitale and James started doing print drives together in 2020. Last year, Vitale formed Vital Impacts as a nonprofit to “not just create awareness, but get that much-needed funding to the people who are on the ground, doing this amazing work.”

Among its goals is bringing together photographers from many different worlds, career stages and backgrounds together.

“There’s been this huge shift to really, actively seek out and lift up beautiful voices,” Vitale said.

It’s an extremely competitive industry, she said, but it can be more powerful if people “come together” and are “lifting each other up.”

“There’s room enough for all of us. There really, really is,” she said. And that is “what saves this planet, at the end of the day. We literally have to get off this track” and think of it as “a shared web” on “our one little lift raft.”

“Amy tries to foster this community so that all the photographers on Instagram accounts are celebrating each other, you know, sharing each other's work, and that just gets this message out even farther,” James said.

A highlight of the drive this year is a self-portrait of Goodall, taken in the early 1960s in Gombe. She’s seen looking out over a jungle vista, as though viewers can sense the pioneering work ahead of her.

Tony Wu, who “lives underwater,” Vitale said, donated dynamic black-and-white images of humpback whales that appear as though you’re swimming with them at close range.

Dudley Edmondson, a Black photographer based in Minnesota who’s led efforts for equity in the outdoors, contributed a nearly dream-like image of a great horned owl against a fuzzy magenta treeline during a snowstorm.

She enlisted photographers who come from more of a fine art sensibility, too. Jim Naughten, who studied painting, uses digital post-production to create images of wildlife such as rhinos and primates that boast rich palettes that call to mind oil on canvas. They’re “fantastical, fantastical worlds,” Vitale said, that also call into question humans’ impact on the species’ future.

They’ve also ensured there’s a variety of price points and that the photographers get a share of the proceeds, since fine-art sales are among the “last vestige” where photographers can earn a living.

Montanans are among the mix. They include Tailyr Irvine (Salish-Kootenai), who grew up on the Flathead Indian Reservation and has become a regular contributor to the New York Times and a Nat Geo Explorer. Ronan Donovan, also an Explorer, donated pictures of an Arctic wolf and her pups and a god’s-eye view of the Grand Prismatic Spring in Yellowstone National Park.

Vincent J. Musi, who photographs close-range portraits of animals — including an orangutan, looking remarkably peaceful — once shot pictures for the Missoulian.

“Her attention to the whole, everything from the print itself to the packaging, to making it 100% carbon neutral — she plants trees for these prints — and the thought and the intention, you can feel it in the finished product.”