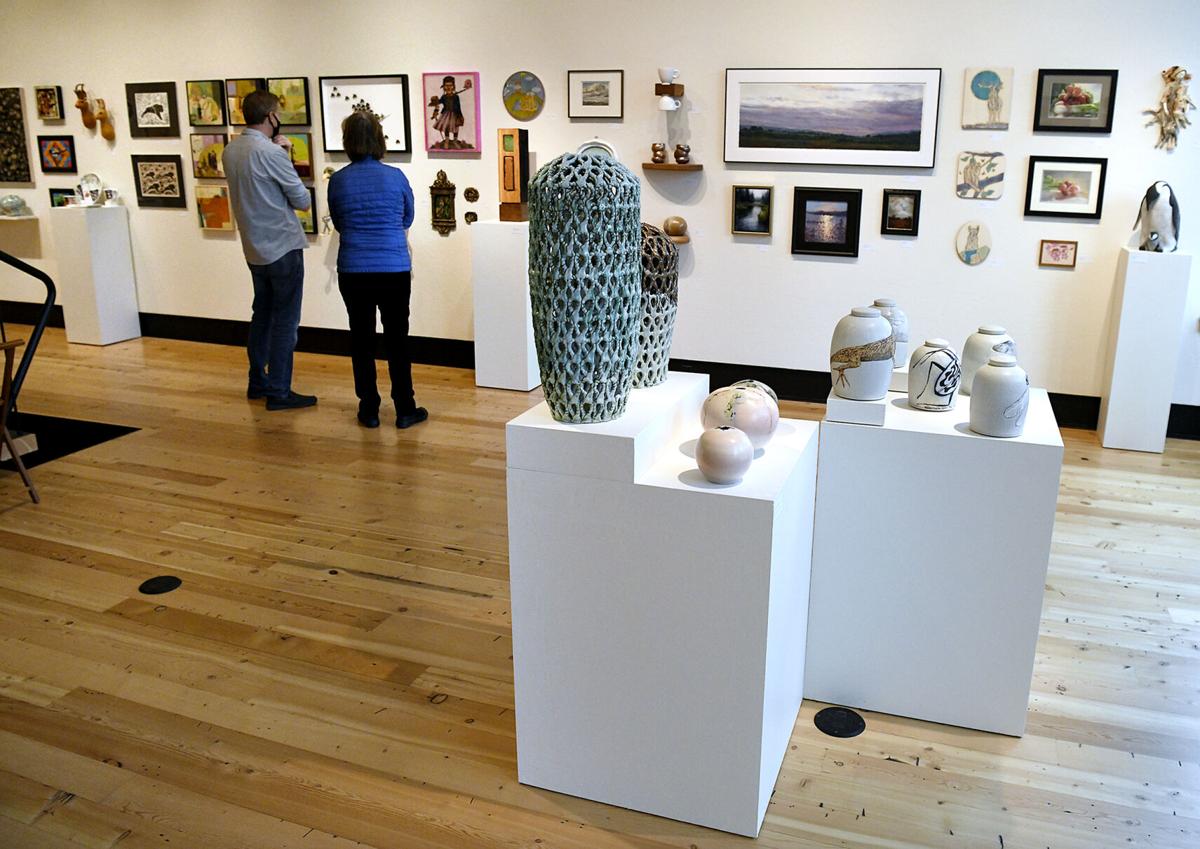 The Radius Gallery's Holiday Show, featuring work by 60 artists, opens on Friday. The gallery is asking people to reserve a time to arrive because of COVID-19 restrictions. 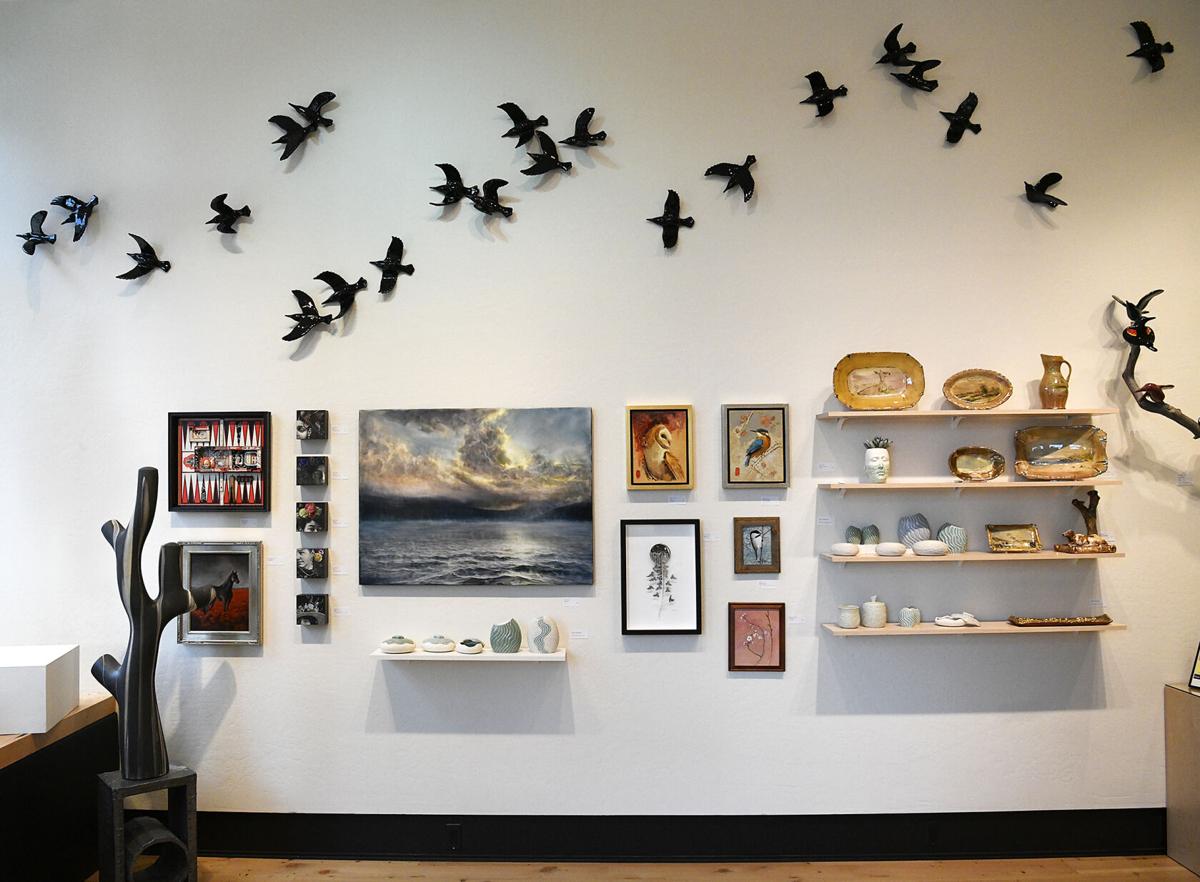 The Radius Gallery Holiday Show, in its seventh year, is an eclectic invitational show with many affordable, smaller pieces.

The Radius Gallery's Holiday Show, featuring work by 60 artists, opens on Friday. The gallery is asking people to reserve a time to arrive because of COVID-19 restrictions.

The Radius Gallery Holiday Show, in its seventh year, is an eclectic invitational show with many affordable, smaller pieces.

The Holiday Show at the Radius Gallery might double as one of the biggest group art shows in downtown Missoula. Now in its seventh year, it still is, even though they had to “pare back” due to COVID-19.

“This is about half the artists as usual, but that’s still super-ambitious to have a 60-person art show under these conditions,” said co-owner Lisa Simon.

The plan is still the same: An eclectic invitational show, with a lot of affordable, smaller pieces priced as gifts in the under $500 range.

It’s the gallery’s first Holiday Show in its new two-story building on Higgins Avenue, which is also home to the Relic Gallery, and, in the alley facing the Merc, the Allez! mural project, where temporary murals can be installed.

Last year, Simon estimated that 700 people showed up for the holiday opener, including artists and their families. Even with the extra space, they’ve had to devise a safety-minded system to guide people through the gallery during the first weekend.

They’re asking people to go to radiusgallery.com and reserve a 15-minute arrival window. “Four people (max) will be admitted to the gallery every 15 minutes to keep the total number of concurrent visitors low—i.e. 8-12 at any one time,” the site says. That will still allow visitors to see the show for about 30 to 60 minutes.

They’ve also been working on a designated route that will take you through the main floor, then upstairs to the more ceramics-focused gallery, through to the Relic Gallery, a space curated with interesting art, antiques and curiosities owned by building owner Brian Sippy and national appraiser Tim Gordon.

Then you’ll head back down a separate stairwell and through another exit. You can reserve an item to buy, but won’t be able to pick it up until later.

Along the way, you’ll see hundreds of pieces, the bulk made by locals or regulars.

“One of the things that I hope people are getting out of coming to the show cumulatively, is knowing who the artists in the community are because they see their work at least once a year,” Simon said.

Peer around the gallery, and familiar handiwork is everywhere.

Hadley Ferguson painted a series of magic-hour landscapes over hills, fields and lakes. Theo Ellsworth created woodcuts of wide-eyed creatures with his signature linework. Barb Schwarz Karst, a retired art teacher who’s won awards for her detailed portraits, has been making abstract paintings with meditative line work and a minimal palette. They’re small-scale with outsized impact, a theme for the show. You can also see that quality in a series of prints by Frank Finley, who teaches art at Salish-Kootenai College.

Downstairs and upstairs are lined with cups — splashy surfaces by Josh DeWeese, hand-drawn illustrations by Donna Flannery and Shalene Valenzuela, geometric patterns by Andrew Avakian and Nicholas Danielson. There are sculptural ceramics, too. Jon Bonnicksen, whose white rake-fired rabbit busts were popular last year, tried a new technique to make a black one, with white tethering around the edges of its elongated upright ears.

Susan R. Carlson, who assembles her pieces from found objects, has conjured several sculptures that, while they have a cheerful palette and items, remain cryptic. In one shallow box, portions of maps of places around the world are joined by dice, an eight-ball, airplanes, and tiny Airstream vehicles, a nostalgia-inducing view of the former freedom of travel that doesn’t directly allude to current events.

Since the objects she uses appear vintage, it feels timeless, like something that could’ve been made 30 years ago, 12 months ago, or last month.

After it opened in its original location on East Main Street, the gallery has been taking notes, basing its plans on community response and needs, Simon said.

Co-owner Jason Neal, said it was “six years trying to figure out patterns in terms of what shows are successful and what times of year have more walk-in traffic.”

Since the pandemic, “it seems like all that is sort of out the window,” but they’ve maintained a regular schedule of exhibitions without canceling or shortening any.

They’ve redesigned their website to make it more user-friendly and easy to order. They used to view the site as a way to reach people outside of the area.

Now, “it’s a way to reach people who can’t leave their homes in Missoula,” Simon said.

It’s a demanding time for artists as well. Many have seen exhibitions elsewhere canceled and are sending extra work.

They’ve even had to stagger the drop-off times because of COVID. As many artists come by, it might be the first time they’ve been through all year.

“It’s a very social show, that’s why it might be kind of strange this year,” Simon said.