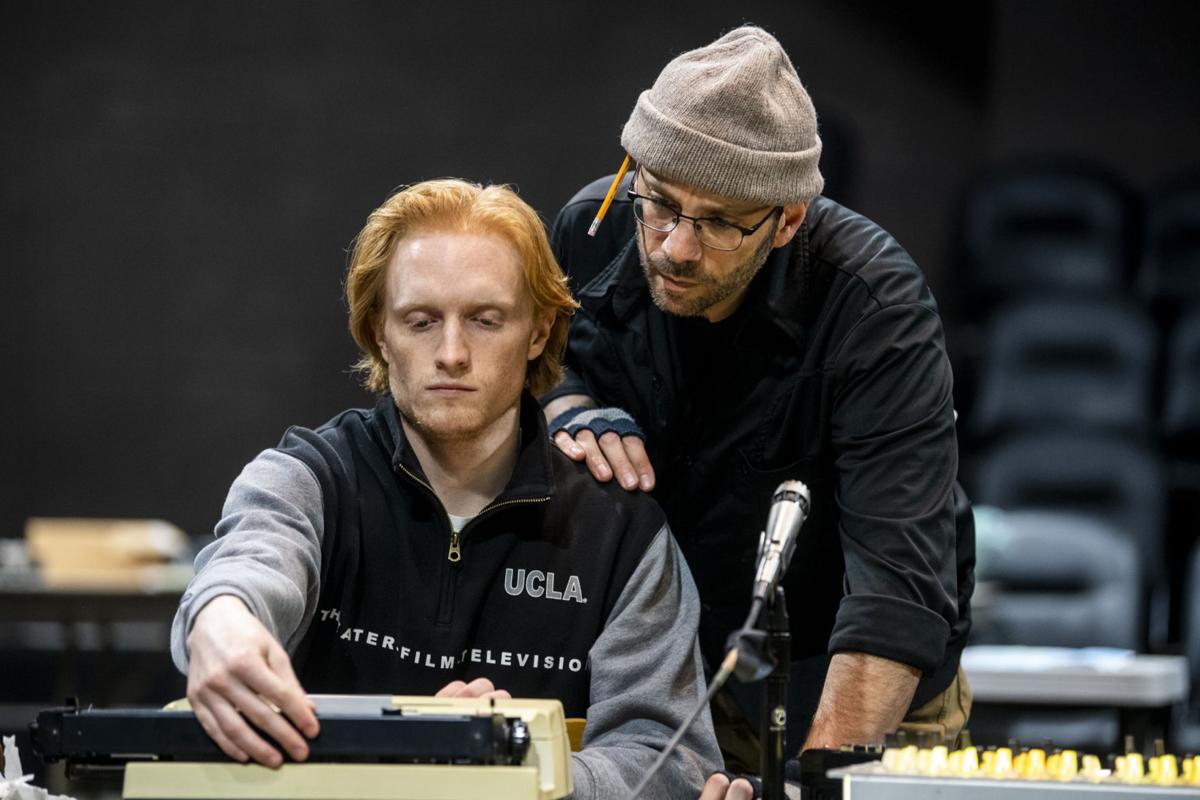 Montana Repertory Theatre's Hudson Therriault, left, and Jeremy Sher rehearse a scene of the upcoming "War of the Worlds" performance at Masquer Theatre last week. The play is based on the original 1938 radio play by Howard E. Koch and narrated by Orson Welles. 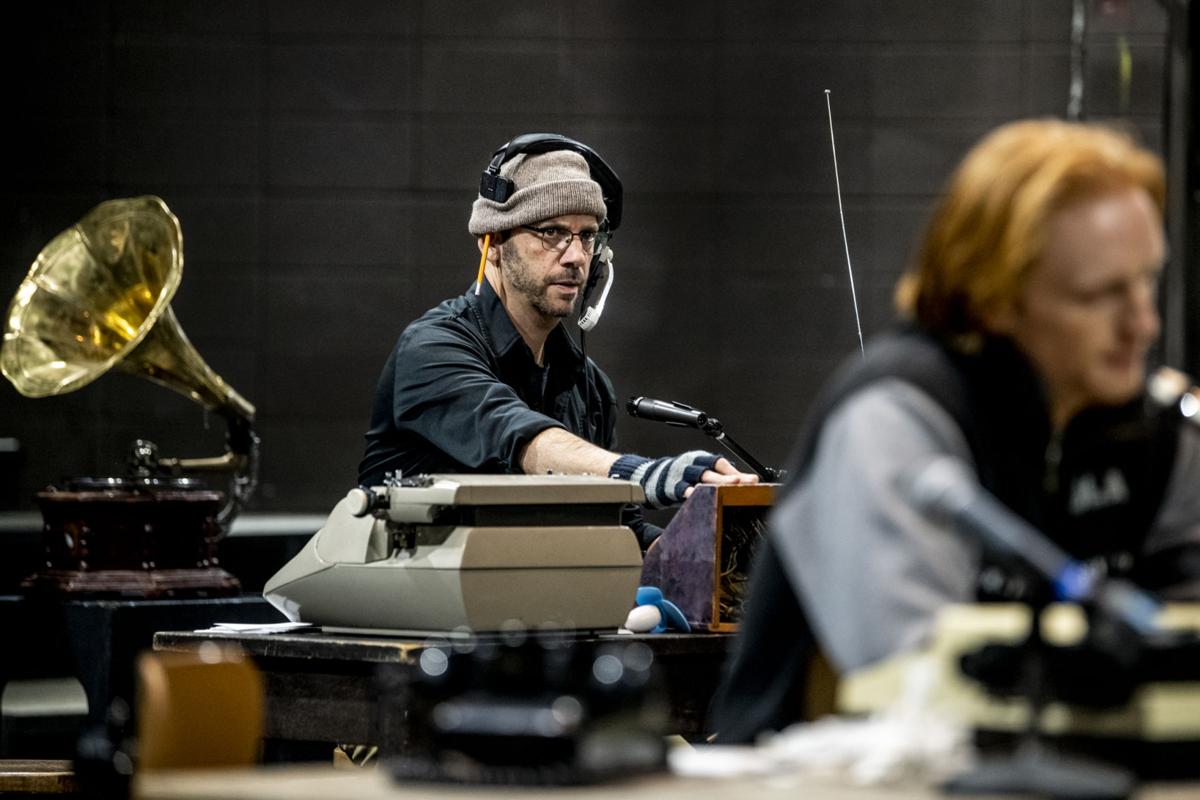 All five actors and actresses will be cast in multiple roles throughout the performance.

Montana Repertory Theatre's Hudson Therriault, left, and Jeremy Sher rehearse a scene of the upcoming "War of the Worlds" performance at Masquer Theatre last week. The play is based on the original 1938 radio play by Howard E. Koch and narrated by Orson Welles.

All five actors and actresses will be cast in multiple roles throughout the performance.

At a recent rehearsal in the Masquer Theatre, five cast members darted around the stage, arrayed with old-fashioned equipment: microphones, a Victrola record player, a typewriter, a bass drum.

At a table, covered with antiquated broadcast equipment, in the center stage, Glenna Brucken, a professional actor from New York, assumed the drawling voice of a U.S. Army general, assuring listeners of a radio news bulletin that the military could quash any potential threat from the nearby Martian ship, which had crash-landed on a New Jersey farm. To her left, a trio of actors gathered in a row and began stomping their feet to create the sound of the army approaching an alien as it emerged.

As the threat escalated and the invaders warmed up their ray gun, Jeremy Sher grabbed a waterphone, a circular metal instrument, and began bowing to create an eerie, unsettling drone. On cue, Jeremy Sher clanged chains against a barrel and piece of sheet metal to generate startling sounds of violence.

"War of the Worlds" infamously terrified listeners back in 1938, when Orson Welles and his Mercury Theatre reinterpreted H.G. Well's story of an alien invasion on radio across the country. A new production by the Montana Repertory Theatre re-envisions the play, wondering how its messages of apocalypse would resonate if performed live on stage in 2020, with a cast of five creating those effects live on stage, the old-fashioned way.

The Rep, a professional theater in residence at the University of Montana, picked the original 1938 radio play by Howard E. Koch as its touring production this year, where it will premiere in Missoula and then head to five other cities with stops back at home base.

The Rep's new artistic director, Michael Legg, selected the play, which exists in the public domain and consists of not much besides the dialogue required for a radio play.

He reached out to Caitlin O'Connell, a director based in New York who specializes in brand works, and asked her how she would reinvent the script, in essence creating a new play.

O'Connell said she read the script and felt "haunted" by some of the language and its contemporary resonance, with phrases like "you wrecked the greatest country in the world," or references to calamity, catastrophe or disillusionment.

"All those words to me speak to the moment that we are in, and the kind of tumult and turmoil that I think we see in our very divided nation in the moment," she said.

In her vision, we see five characters who have survived a modern-day apocalypse. They break into spaces like an old multi-purpose recording or broadcast studio, and "re-tell" the original play as a "coded message to the people who might be able to tune in, the survivors of that crisis."

With visual projections, there will be allusions to the threats they're under without getting too specific.

"We're trying to give just enough clues and just enough details so that the audience understands that but also, we're not limiting it to an explicit or myopic view, one sort of hyper-liberal point of view on the world right now. We're trying to make space for people to bring their own interpretation of what that resistance group would be made up of," she said.

The conceit of the play within the play sets the cast rushing around the stage in a choreographed manner, picking up and dropping gadgets and objects to create the live sound effects, whether it's a plane or an explosion. They also must switch personas frequently — there are five cast members, three from New York and two from Missoula, portraying more than 20 characters. Brucken compared it to rubbing your stomach while patting your head. "Your body needs to be doing one thing and your voice needs to be doing another, and you've got to think about what's coming next," she said.

The contemporary setting means that the cast doesn't have to do the nonstop "Mid-Atlantic, clipped radio voice" of the original, Sher said.

"Sometimes the language really needs that, so you can dip into it slightly, and then bring it back into a contemporary place. And for the most part it's very much now," he said.

O'Connell hired sound designer Michael Costagliola to think of ways to make those sounds live. He came up with an assortment of traditional Foley artist tools, like the water phone. He also improvised some unexpected ones, like a Styrofoam plate that conjures up the noises a Martian rising from a ship might generate.

As they've moved into rehearsals, he's noticed that watching the actors make the sounds adds another theatrical element.

"Seeing the cognitive dissonance between this ordinary object and the otherworldly sound it can produce is, I think, exciting to me," he said. It's also brought out an unexpected layer of lightness that you might not expect from a script that's completely straight-faced and serious. As a whole though, Sher said he believes it will be "genuinely terrifying" with "immediate and emotional" effects from the sound design. For those who haven't heard the original show, the latter half suddenly moves from action into a more ground-level contemplation of humanity, with a long monologue from a survivor. O'Connell said it "presents two different perspectives on where people go after an apocalyptic crisis."

"The choice of Orson Welles' interpretation to land in that conversation and just give us human interaction and belief systems colliding, I think, is purposeful and feels also nice in a 2020 context, when we have so much stimulation, so many action films, so many disaster-apocalyptic movies that are more horror-based, more about gore and wreckage, to land in a really human interaction," she said.

The production marks a re-incarnation of the Rep's tour under Legg, who was hired in early 2018 and is now in his second season in the post.

Over about a quarter-century, the Rep had built a national tour, with stops around the United States.

Legg said the number of producing houses that would book non-musical plays has declined in the past 10 years. With a shrinking number of venues, the profits from the tour were down as well.

After taking a year off, the project is re-emerging as a Montana-only tour that still aligns with the Rep's original mission.

"How can we go back to why this thing was developed in the first place, and it was to provide an educational experience to the students here, and to take theater to people in Montana who might not otherwise have access to it?" he said.

The Rep had developed a signature style of "classic American stories," which often meant plays like its signature production, "To Kill a Mockingbird."

Legg thought the Rep could extend that definition to include works outside of names like Tennessee Williams. In his view, one of the limitations of the classic American canon is that "those plays don't necessarily represent all the people who live in this state."

"I can't think of one that ... really takes in the breadth and depth of all the stories that are contained inside this state," he said.

It could mean, say, "War of the Worlds," a text that exists in the public domain and can be reinvented to engage and "acknowledge younger audiences and more diverse audiences."

"What are the stories that have resonance today, what are the stories from that classic American canon that I can hand to a director like Caitlin and say, what can you do with this, how can you re-imagine this play to be relevant to all of our audience in Missoula?" he said.

The Montana Repertory Theatre's 2020 touring production, "War of the Worlds," based on the original 1938 radio play, will premiere in Missoula and tour around Montana. All Missoula performances take place in the Montana Theatre, PAR/TV Center at the University of Montana. Tickets are $25 regular or $10 for children. Tickets to the Missoula shows can be purchased there or at the UMArts Box Office.

Here's the full list of dates. Go to to montanarep.org for more information.

The cast will perform a live broadcast on Montana Public Radio on Feb. 7.

Artists give form to the formless at new UC Gallery exhibition