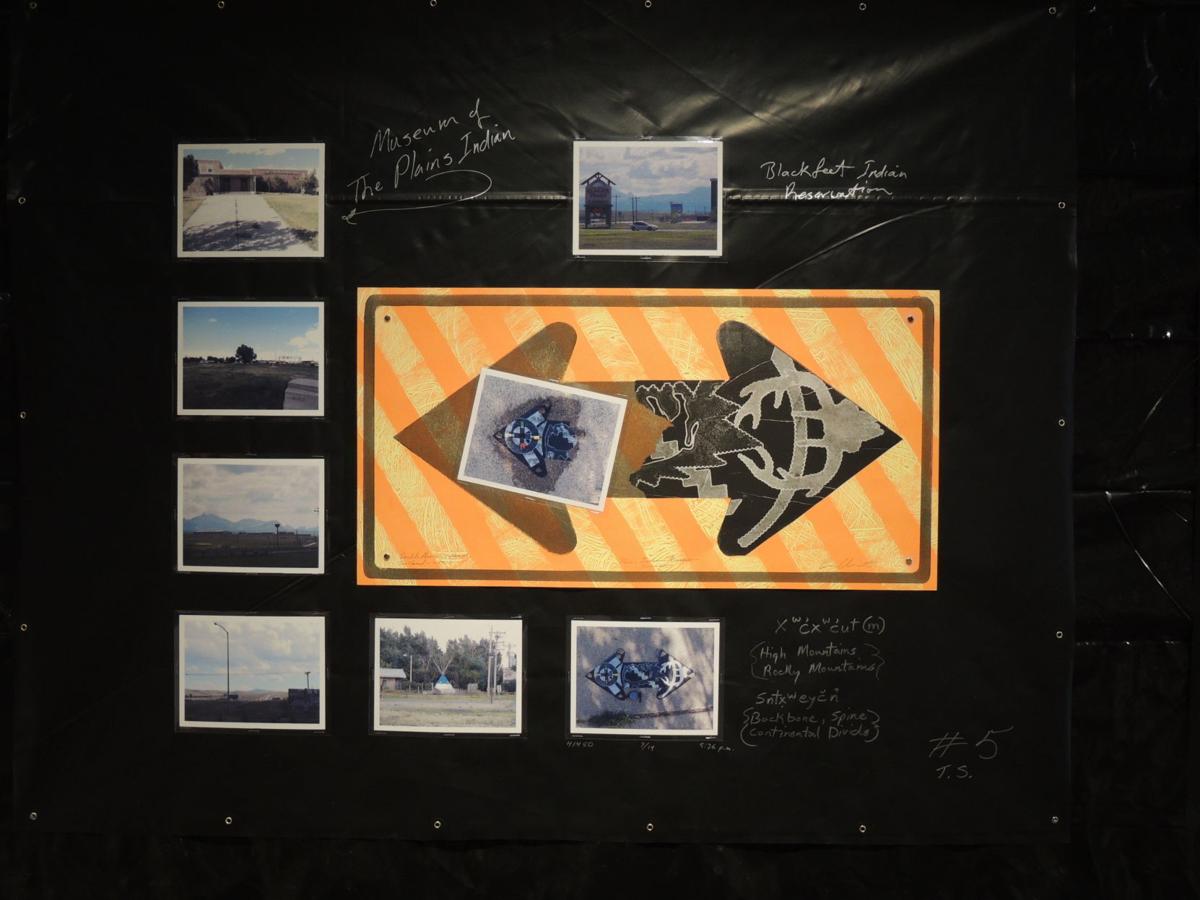 Each of the panels documents a particular site that Clairmont visited, like here, the Blackfeet Indian Reservation. In the center is his two-headed arrow print and a photograph of the on-site arrangement and the surrounding area. Clairmont chose to display the art on black plastic since it's a petroleum product. 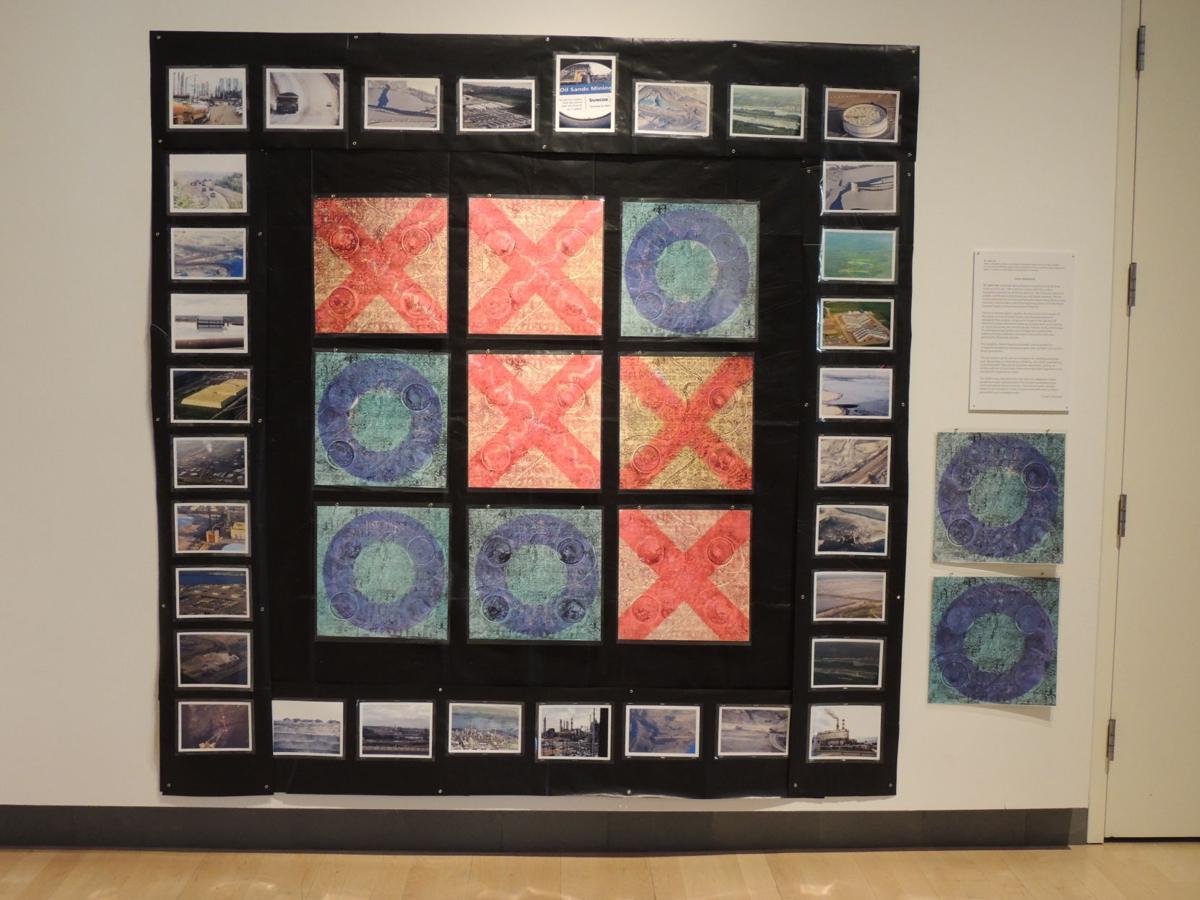 The tic-tac-toe prints include references to games and buffalo nickels. The photographs include aerial views of the tar sands sites. 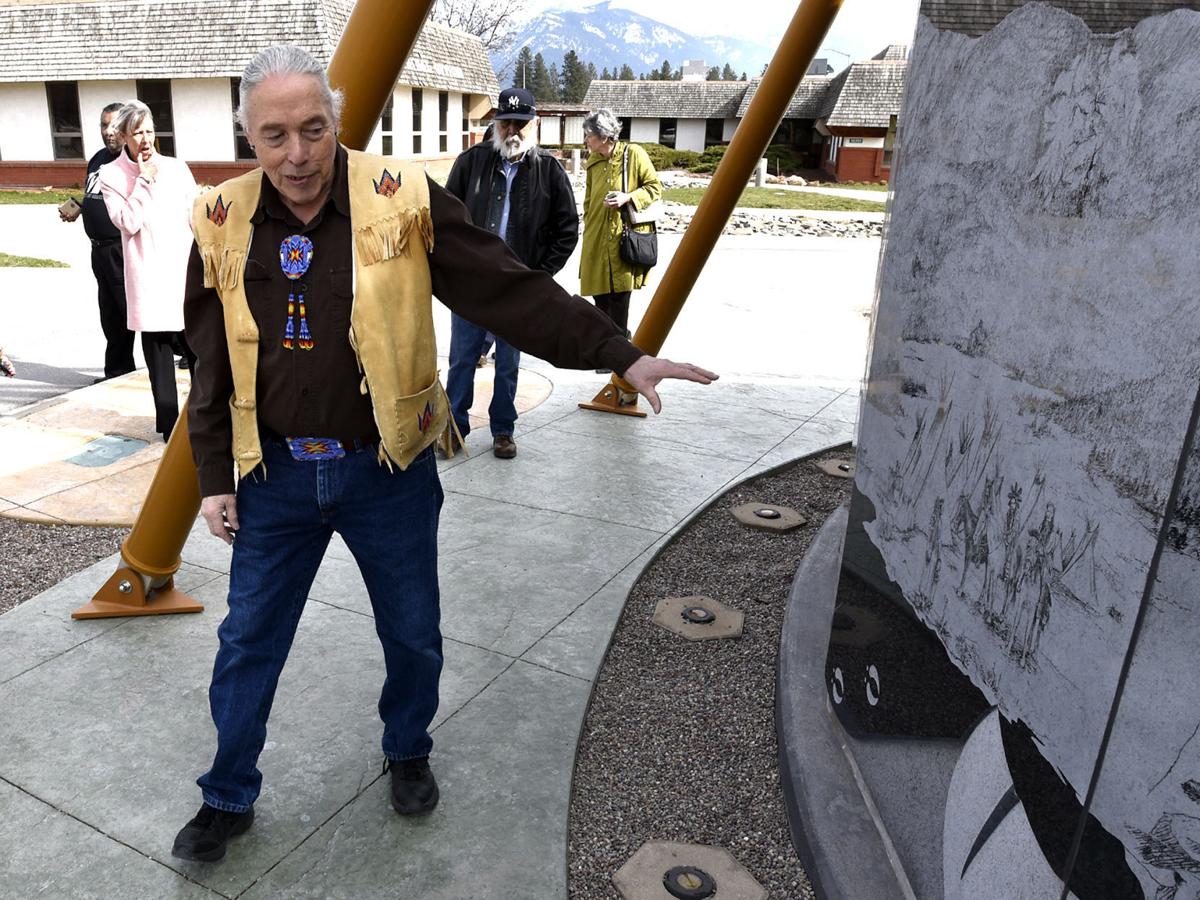 Corky Clairmont leads a tour of the Warrior/Veterans Wall of Remembrance, which he designed, at the Confederated Salish and Kootenai Tribal Headquarters in Pablo in 2016.

Each of the panels documents a particular site that Clairmont visited, like here, the Blackfeet Indian Reservation. In the center is his two-headed arrow print and a photograph of the on-site arrangement and the surrounding area. Clairmont chose to display the art on black plastic since it's a petroleum product.

The tic-tac-toe prints include references to games and buffalo nickels. The photographs include aerial views of the tar sands sites.

Corky Clairmont leads a tour of the Warrior/Veterans Wall of Remembrance, which he designed, at the Confederated Salish and Kootenai Tribal Headquarters in Pablo in 2016.

The Biden administration’s revocation of the Keystone XL oil pipeline permit last week had special significance to Corwin Clairmont. The construction project would originate in the Canadian tar sands in Alberta, a destination that the Salish artist visited himself.

The environmental impact of the pipeline is “too great a sacrifice,” he said.

“I am really happy, that hopefully, there is a shifting of emphasis in the need for fossil fuels and the mining of the tar sands,” he said.

The tar sands were the subject of a years-long art project he undertook starting in 2010 and culminating in an exhibition at the Missoula Art Museum in 2018 called “Two-Headed Arrow/The Tar Sands Project.”

A new catalog with color photographs revisits a project — with writing by Clairmont and other artists and writers, many of whom are Indigenous — that help illuminate an artwork that’s particularly suited to a book.

Clairmont’s way of making art involves print-making, which is a centerpiece of this project. There’s far more, though. His career took him from his home in western Montana to Los Angeles during the 1970s, where he was exposed to artists like John Baldessari, whose ideas about how to make art or what it should be were revolutionary. After establishing a career in California, in the 1980s, he returned to the Flathead Reservation and created the art department at Salish Kootenai College and stayed till retirement. The move home was a “necessary shift,” where he could begin relating to the tribal community through life and work again.

The artists Jaune Quick-to-See Smith and Neal Ambrose Smith wrote an essay together that sums up the way Clairmont’s way of making art (he has many) links back to a lifestyle of hunter-gathering, which, while nomadic, was meticulous.

“He photographs, makes molds, charts, sews things, prints signage, constructs maps, talks to people on his journey, flies in planes to view the land, and calculates mileage between test sites. He is doing what we would have done in tracking a buffalo herd across the prairie. Yes, there is a similarity, there is a continuum,” they write.

This particular project first began a decade ago, when Clairmont became aware of the tar sands in Canada. Like many, his first inklings were the “megaloads” — oversized truck shipments of equipment — that passed through western Montana on their way north. He was shocked by their size, and began shooting photographs and reading about them and their destination.

The ideas began to gestate around a particular set of images. He made a “double arrow” print, a reference to commonplace and stereotypical Indian imagery that’s also had basic utility for hunting. Importantly, it also visually resembled the road signs you see at T-intersections.

“It’s a warning sign to slow down and stop and make a decision whether you’re going to go right or left,” he said. It became a “clarifying” image for the project. “We don’t have the flexibility to keep making wrong decisions now,” he said.

He learned more about the destruction of habitat in Canada, including black bear territory.

“For tribal people, animals are relations,” he said. “The land itself, in a traditional sense, is more or less our book, our record, our stories with landmarks and different things that contain the stories that have been passed down for tens of thousands of years, and once they’re gone, you’ve lost a page of your book,” he said.

Clairmont’s no stranger to humor in his work either. He came upon the humble image of gummy bears, which come in four colors, one for each cardinal direction. And a pun — “chewz” — that looped back to the arrow sign.

And he decided he would go all the way up to Fort McMurray, Alberta, again. Travel has been a part of many of his art projects in the past. “Traditionally of course, our people would travel to site to site to site, from location to location to location, depending on the needs of our communities, so we were involved in travel all the time,” he said.

One of his first major travel pieces came much earlier in his career.

In 1979, he won a $3,000 grant from the National Endowment for the Arts, which was the subject of controversy. “A lot of people didn’t want to support artists who might be doing radical things with taxpayer dollars,” he said. So Clairmont thought, “when I get my money, I’m going to give it back to everybody in the form of an art piece.”

For his project, “Support Subversive Art in Your Community,” he flew around the country in large circle, taking out small ads that each contained a segment of the title phrase.

For instance, in the St. Petersburg Times, he took out an ad that read “SUBV-” in white text set on a diagonal stripes of black and white. In a small black bar at the bottom, it reads only “NEA” and his initials, “CNC.”

“All you’d see is a portion of a word, and so, of course, being subversive, no one actually recognized it as being an art piece,” he said, with a laugh. “And at the same time, I literally distributed it to millions of people.” He sent copies of each paper to the L.A. County of Museum of Art and the Whitney Museum with instructions to lay them out to the public.

To select his stops on his way to Fort McMurray, Clairmont decided on a somewhat arbitrary interval of 50 miles, perhaps a length that could’ve been traveled by his ancestors. He didn’t know where these measurements would land him, exactly, which was part of the point. “I wasn’t trying to create a travel brochure,” he said. Some spots, while lacking a “grandiose view,” are “no less important” than the next, he said. “Without that point, it wouldn’t be a whole” —  a sentiment he wanted to emphasize.

He started at the Missoula Art Museum, then went north to Ninepipes on the Flathead Reservation and all the way north to Fort McMurray.

At each point, he took photographs of his surroundings. He laid down a double-headed arrow print, arranged the gummy bears, said a prayer, and then left half the print behind. Travel, and repeat.

When he finally reached Fort McMurray, he signed up for a bus tour of the SunCor mining operation. He and a busload of perhaps 20 or more people were brought to various sites where they could get out and look around. At one stop, he took out his gummy bears and print for a picture.

Someone noticed his project, which would naturally appear cryptic. A Japanese engineering student asked if he could take a picture of them, too. The guide had noticed, too, and when they returned to the bus, the guide excitedly told the group that SunCor produces the lubricant used to prevent the ursine gelatins from completely sticking together.

He hopes the common-place nature of some of these images — the double-headed arrow/road sign, or the ubiquitous candy — will become “constant reminders” in a way, of those implications.

The photographs and prints for each site, with handwritten notes by Clairmont, were mounted on the MAM walls in 2018 on a deliberately unlovely surface — black plastic sheeting.

“I didn’t think it, personally, could be hung any other way,” he said. He liked the tie to the petroleum products — using a product of the industry to critique it, and the similarity to black-top highways he drove. “I really wanted to emphasize the nature of the oil, the impact,” and this presentation seemed to emphasize that. It reminded him of classic horror film, “The Blob,” or maybe dinosaur skins, or the buffalo hides that tribes used to record important historical events each year.

He didn’t only witness Fort McMurray from the ground. He chartered a flight and took pictures from above that capture some of the hugeness of the process. Those photos were displayed around prints that reference a game of tic-tac-toe with letters reproduced in faded, textured colors transposed with imagery from "buffalo" nickels.

He also took pieces to China on an exchange through the Montana Arts Council. (There, he was able to add some local gummy bears to the compass.)

One of the last pieces was made on a trip to Standing Rock, North Dakota, in the midst of the pipeline protests, and photos were included in his installation. Those are among the few images where his fellow opposition is so fully on view.

“There were people from all over the world. You could see over 300 flags flying from different countries and all of our tribal communities."

'The Small Crimes of Tiffany Templeton'