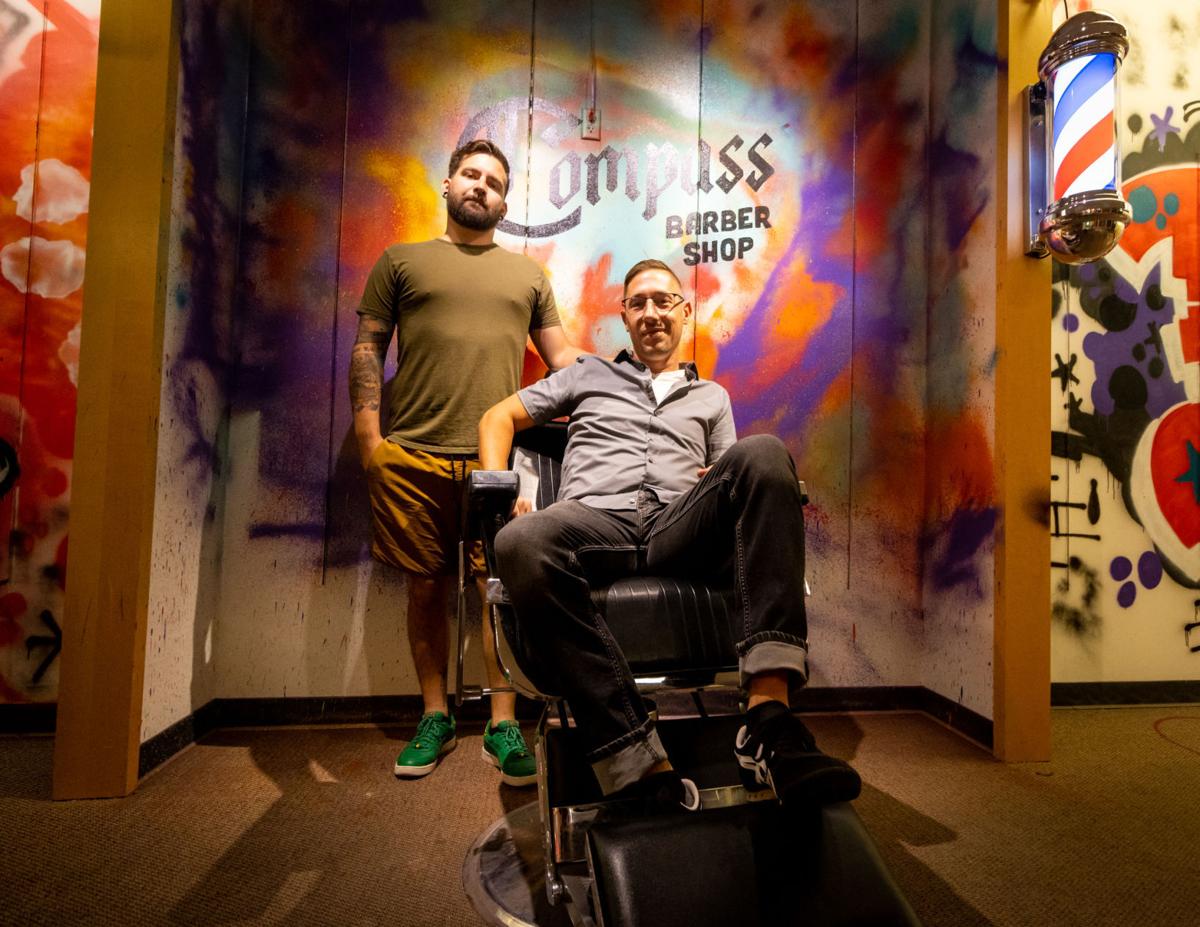 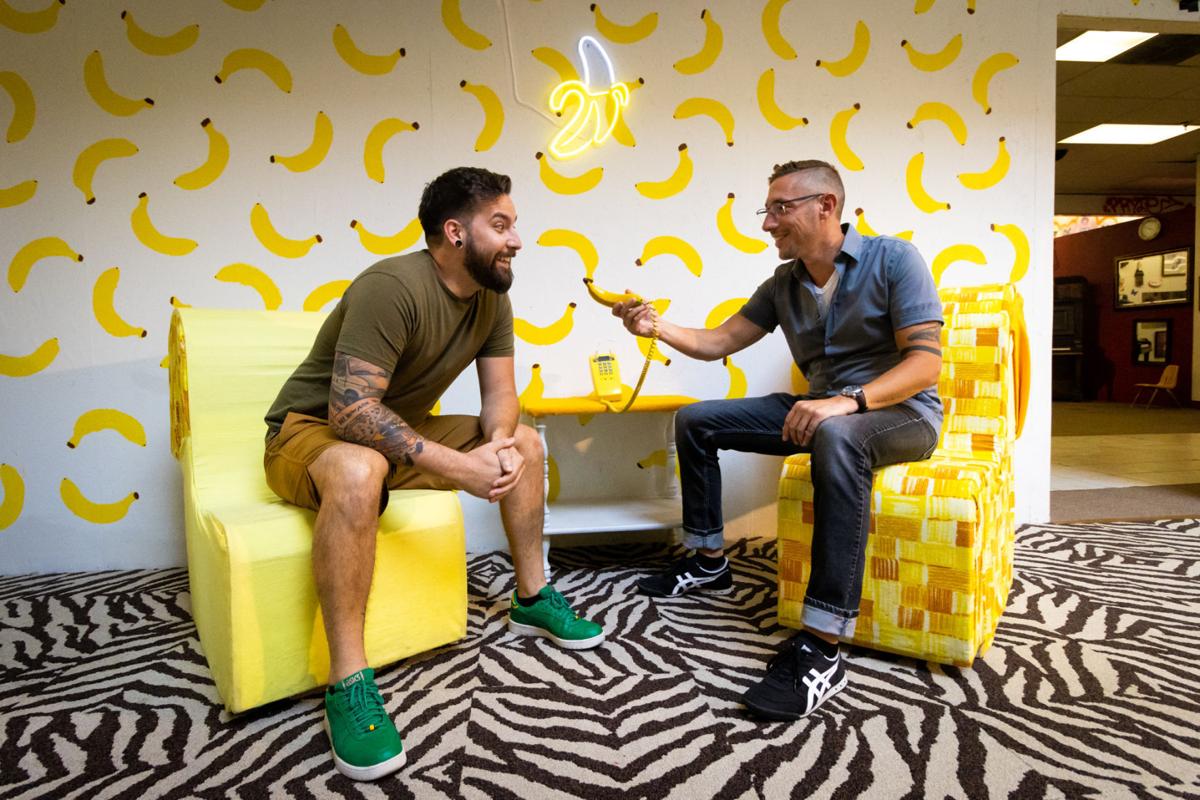 Gardner hands over a banana telephone call to partner-in-crime Foret at the Giggle Box.

Gardner hands over a banana telephone call to partner-in-crime Foret at the Giggle Box.

The co-owner of the Polson Theatres chain said it was going to “save their bacon,” and one independent promoter, Logan Foret, said it was “everything” for their business and employees.

Twenty-three recipients in the state have been awarded $8,246,070 in grants, according to the most recent update from the Small Business Administration. More grants are expected to roll out, according to a Friday news release from U.S. Sen. Jon Tester's office.

Applicants could apply for up to 45% of their gross earned revenue in 2019 and a maximum of $10 million. It can go toward payroll, rent, utilities, mortgage payments, independent contractors, administrative costs, state and local taxes and more.

The largest grant in Montana, at $3,785,303, went to Logjam Presents, which owns Missoula music venues the Top Hat Lounge, the Wilma and KettleHouse Amphitheater. It also books the Rialto in Bozeman and is building another venue there, The Elm.

The grant “allowed us to plan and fund the substantial upfront costs to launch the 2021 KettleHouse Amphitheater season,” which would not have happened without the program, according to an email from Ryan Torres, Logjam spokesperson.

“For Missoula, a lost season would have resulted in over 100 less jobs and the loss of the economic benefit associated with the 80,000-plus season concertgoers as they spend money before and after the concerts,” he wrote.

The Top Hat operated solely as a restaurant and bar during the pandemic. The Wilma had a small handful of limited capacity live events last year but otherwise was closed — concerts resume there at the end of July, while the outdoor amphitheater just opened its season with Brandi Carlile after staying dark since fall 2019.

With the prospect of the grant, they sought short-term loans to retain managers and bring back furloughed staff before restarting concerts, he wrote. It also helped them retain key staff members and “allowed us to plan a path forward without worrying about the financial burden which resulted from operating a business for 18 months with no revenue.”

Co-owner Becky Dupuis said the payment, which arrived last week, is “going to make the difference between us staying open or not,” and without it, “we were going to have to make some pretty tough decisions.”

Its theaters in Havre and Polson reopened last August, while the others have been more gradual depending on whether they’ll draw enough business to stay out of the red, if possible. Ronan and Cut Bank remain closed, the latter because they’ve had difficulty finding a new manager.

The grant money will go toward property taxes, utilities, loan payments and other fixed expenses they had to pay regardless of whether they were open. It sounds like “a lot of money, but with nine theaters it goes pretty fast,” Dupuis said. Before the pandemic, their number of employees varied from 130 to 150 depending on the season. They now have 75 and are potentially adding more as they increase screenings.

The Missoula Downtown Association received $187,182. It was forced to cancel its 2020 event season, including features at Caras Park such as the Garden City Brewfest, Out to Lunch, Downtown ToNight and the River City Roots Festival, losing approximately 60% of total revenues, according to Robert Giblin, director of finance and administration for the Downtown Missoula Partnership.

Foret and Michael Gardner’s BFK Productions received $59,654. The company is one of the few independent music promoters in the Missoula area, putting on the annual Disco Bloodbath Halloween party, the Silver Cloud Campout festival in Haugan, newer events like the BBQ & Whiskey Festival and the Northwest Margarita Festival, and the Giggle Box experiential art museum in Southgate Mall.

Foret said the grant “means everything” to their business, between planning upcoming events, reviving ones that were canceled last year, looking toward another large venture, and keeping the Giggle Box open.

They’re starting up some fuller capacity shows of up to 150 there this weekend (its prior offerings during the pandemic had as few as 15 to 25 people). Last Saturday’s BBQ & Whiskey Fest was their first “actual event” in a long time.

“That’s a year and a half of not being able to employ artists, production managers, stagehands, lighting guys, sound guys, food vendors, door and security staff,” he said.

Gardner said those workers have largely been left out of direct support programs, so “the majority of our grant went toward those production folks and towards talent acquisition,” since they “need all that to actually be functional or operational.”

The program, part of the Economic Aid to Hard-Hit Small Businesses, Nonprofits, and Venues Act, started up in early 2021 and the application process has proved to be a long wait.

Sean Lynch, owner of the Pub Station in Billings, said he doesn’t “know that it’s ever fast enough” given the situation venues have been in since March 2020.

He led the push for relief in Montana for the National Independent Venue Association, which formed last year with the “Save Our Stages” campaign. His venue did receive relief last year through a state program, but those funds needed to be spent by Dec. 31 due to rules governing the CARES Act.

His application was submitted in late April and recently bumped to “pending final review” status, he said.

His venue has reopened but is also prey to a “terrible” hiring market, he said. The staff that he has on hand are taking on multiple jobs — he’s relearning graphic design, for instance, which he hasn’t handled in years.

Those shortages also mean fewer concerts. “I’m turning down a lot of shows because I can’t staff ‘em,” he said.

While the Pub Station is actively selling tickets, “none of it shows up on your books until the show plays,” he said. After a brutal experience in 2020 where venues had to refund advance tickets, he won’t be “going down that path again.”

He added that both of Montana’s U.S. senators, Steve Daines and Tester, have been “extremely supportive of us in Montana,” and were both “totally engaged.”

The complete list of Montana recipients as of July 6:

Things to do in Missoula: Outdoor and online music, movies and theater