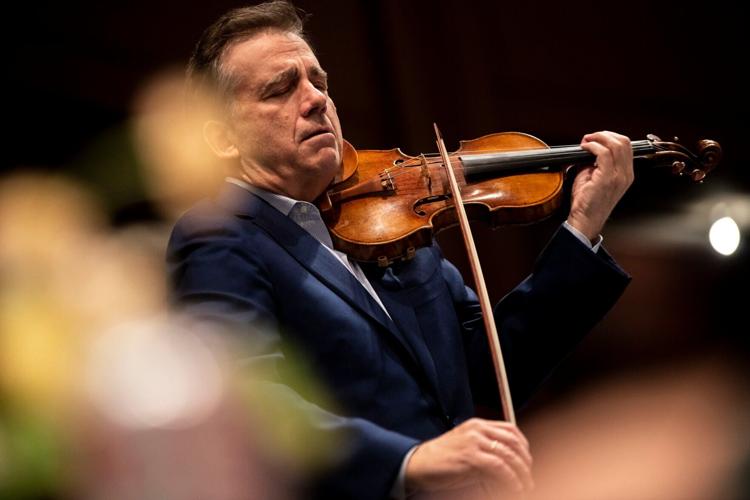 Robert McDuffie, a world-renowned violinist from Macon, Georgia, performs a piece for a small group of people at the Dennison Theatre on Thursday. McDuffie and his sister Margery McDuffie Whatley, a piano faculty member at UM, will perform together in the Missoula Symphony's "Brothers and Sisters" Masterworks concert Saturday and Sunday. 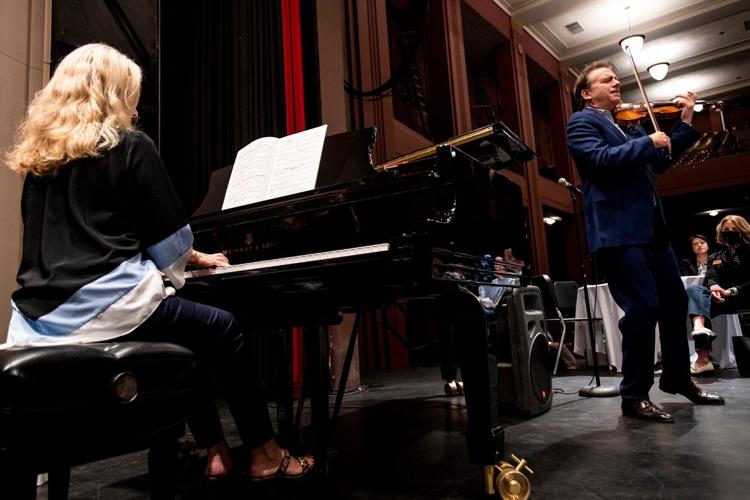 Robert McDuffie, a world-renowned violinist from Macon, Georgia, performs a piece for a small group of people at the Dennison Theatre on Thursday. McDuffie and his sister Margery McDuffie Whatley, a piano faculty member at UM, will perform together in the Missoula Symphony's "Brothers and Sisters" Masterworks concert Saturday and Sunday.

Felix and Fanny Mendelssohn were siblings, both celebrated musicians and composers.

Who better to perform their work with Missoula Symphony Orchestra than a pair of virtuoso soloists who happen to be siblings?

Robert McDuffie is an internationally renowned violinist who’s in demand from orchestras, performing masterpieces old and new. (Philip Glass wrote a violin concerto for him.)

His sister, Margery McDuffie Whatley, is a conservatory-trained pianist who teaches music at the University of Montana.

“This is the first time we’ve done a concerto together,” Robert said, as there aren’t many written that spotlight both their respective instruments.

“This is amazing,” said McDuffie, who’s eager to explore new pieces deep into his career. “I’ve just had the greatest time learning it.”

Whatley said she and her brother have performed together as a duo quite frequently, sometimes in interesting venues such as the governor’s mansion in their home state of Georgia, but the pandemic limited their opportunities.

Music Director Julia Tai said she’s long wanted to work with Robert, citing his warm tone and the fact that he performs “blockbuster” classics and premieres of new works. Soloists like that bring a “freshness and energy” that’s audible regardless of the time period in which a work originated, she said.

Whatley, meanwhile, is lively as a collaborator and musician. “I just love her personality, and she plays the same way on the piano,” Tai said. When Whatley moved back to Missoula to teach piano, she met Tai and the connections for a sibling concert were planted.

The Mendelssohns were both child prodigies. “They performed together, they studied with the same composition teacher, they're both very talented as a composer and a performer,” Tai said.

Fanny was four years older, Tai said, and acted as a trusted critic to whom he turned with works in progress for feedback and advice. However, because of sexism in the arts at the time, women were discouraged from pursuing international careers and Fanny focused on piano, vocal and chamber pieces.

The two will share the stage on Felix’s Concerto for Violin and Piano, which premiered in 1823. It’s not clear why, but Tai said it’s rare for a double concerto to feature the combination of violin and piano. He wrote it when he was 14, originally for strings and orchestra only. It became a hit, and he expanded it for a full orchestra. It was lost not long after, and only reconstructed in the 1980s by Christoph Hellmundt, a German musicologist, according to the L.A. Philharmonic’s website.

Like all of his works, she said it’s “full of energy, virtuosity on instruments and beautiful melodies. And then the play between the piano and the violin is really wonderful.”

McDuffie said he’s never played it before, and has had “so much fun learning it.” He said he’s grateful for the opportunity to perform a new concerto at this stage in his career.

“I'm still exploring, but you know, to learn a new concerto is not something I think about every day,” he said.

McDuffie said that the teenage Mendelssohn was “obviously cocky,” as the work is filled with “incredibly fast, difficult passages.” He jokingly said that as a 64-year-old, he’s “not gonna let some 14-year-old get the better of me. I’m not going to let you get away with that,” he said.

Overall, the score is “full of joy,” he said, like all of Mendelssohn music. The slow movement has “a sense of nobility and quiet beauty” that he finds remarkable considering the composer’s age at the time.

Whatley said the piece has “a lot of sparkle, a lot of vitality, just wonderful energy but also these beautiful, beautiful melodic lines.” It’s demanding for the pianist — when she was rehearsing, someone told her it sounded like she had 20 fingers.

Fanny is spotlighted separately with her Overture in C, which is rooted in the classical tradition, Tai said, with plenty of energy and rhythm.

To Tai’s knowledge, the Missoula Symphony has never played any of this weekend’s works.

She tries to strike a balance between composers that listeners will be familiar with, along with underperformed and under-recognized historical figures, plus contemporary composers across a diverse range.

Tai said that she’s also in the minority as a woman conductor. “I think I am more sensitive to voices that are underrepresented,” she said, and wants to cue listeners in to “those wonderful composers whose voices we just never hear.”

The centerpiece is Louise Farrenc’s Symphony No. 3. She shared a music teacher with Liszt and became the rare woman piano instructor at the Paris Conservatory. She was unique among 19th century French composers in her adoration of a certain German composer and the Classical tradition, Tai said, so much so that some people called her the “French Beethoven.”

Her work would be played alongside his in concerts, and she “wants to stand up to that.” This particular piece is “really masterfully constructed.”

Tai, who’s never conducted the piece before, has been studying it and said there are “certain kinds of familiarity” that happens when you’re looking at a masterpiece and feel like you already know the notes.

McDuffie, who also champions new and old music, said that he was intently focused on the works of the past when he was younger. When he entered a competition and had to learn a piece by Samuel Barber, he won and performed it for the composer himself.

“It changed my life, playing the concerto for him, and that became my own desert island piece,” he said.

He went on to work with major figures like Glass, Leonard Bernstein, John Adams and more. In 2016 he toured to support a Concerto for Violin, Rock Band, and String Orchestra with childhood friend Mike Mills of R.E.M.

“Being in the process, being in the trenches” made it easier for him to “go back and revisit the standards of the dead white European males and hopefully inject something into that,” he said.

He remains omnivorous, though, and is “always willing to give a listen.”

The Missoula Symphony’s season is, barring any complications, planned to be a normal one for the orchestra.

The family concert on Jan. 28, “The Mountain that Loved a Bird,” features a work by composer Caroline Shaw, who won the Pulitzer Prize in Music in 2013 for Partita for 8 Voices. She wrote a score based on an illustrated children’s book by Eric Carle and Alice McLerran.

The March concert, “Dynamic Duo,” includes two living composers. Jennifer Higdon, who won the Pulitzer for her Violin Concerto in 2010, will be represented with Fanfare Ritmico. The orchestra will also bring in a composer in residence, Jonathan Bailey Holland. A Black composer of new music from Flint, Michigan, one of his works, “Ode,” includes homages to late hip-hop artist J Dilla and Beethoven. Audiences will hear his Concerto for Percussion Duo. Re: the new alongside the classics, Gustav Mahler’s Symphony No. 1 “Titan” is on the program as well.

Finally in May, the Broadway concert brings in orchestral show tunes, courtesy of Curt Olds, a Montana native.

The Missoula Symphony Orchestra’s first 2022-23 Masterworks Concert, “Brothers and Sisters,” will be performed Saturday, Sept. 17, at 7:30 p.m. and Sunday, Sept. 18, at 3 p.m. in the Dennison Theatre. For tickets, go to missoulasymphony.org.

Downbeat Downlow: Show up an hour before the concert and hear Music Director Julia Tai discuss the works and tell stories about the composers.