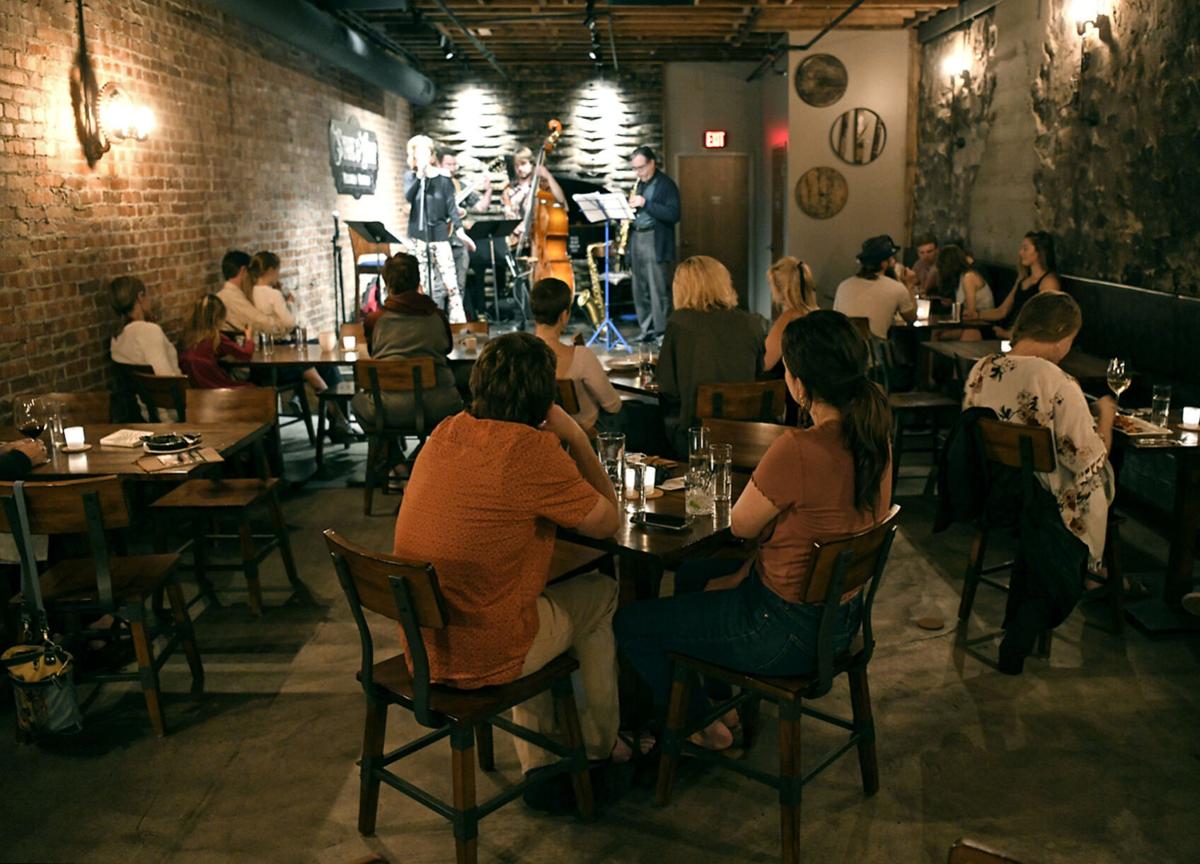 Stave & Hoop has a small club atmosphere and can seat about 100 people. 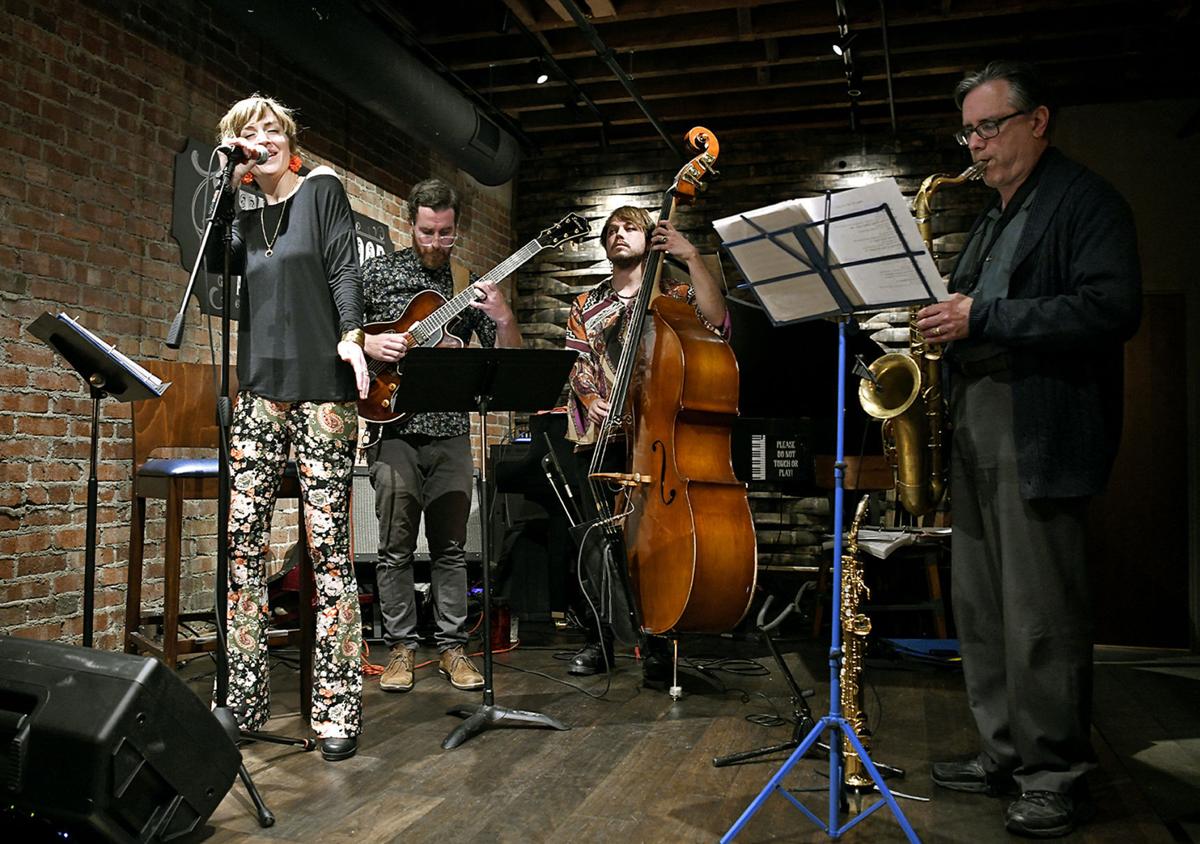 Stave & Hoop has a small club atmosphere and can seat about 100 people.

While the entrance to the Stave & Hoop speakeasy is tucked in an alley off Higgins Avenue, Scott Billadeau said they’re “starting to get discovered already” as more musicians look to perform and more people are heading downtown.

The basement bar isn’t dedicated to a specific genre as much as a niche — a small club atmosphere that can accommodate roughly 100 people seated. They look for acts that can fit the acoustic, intimate vibe, and perform “music with a story,” said Billadeau, one of the co-owners.

“Missoula’s eclectic in their taste, they like mixing it up," he said.

Owners Billadeau, Skyla Sisco, Chad Morgan and Kyle Riggs opened the speakeasy during a tumultuous year, but on Thursday night, there was a quiet and laid-back scene that could’ve been out of 2019.

On the low stage, vocalist Angela Billadeau was singing with a jazz trio: Stephane Gariepy on tenor saxophone, Ryan Belski on guitar, and Finn Caroll on bass. The crowd was quiet enough that the horn didn’t need amplification and the group sounded warm and clear toward the back.

Those who want to give the music full attention can sit up front, and in the back you’re more free to chat, Billadeau said.

Recent performers have included guitarist John Floridis and violinist Amelia Thornton. Local bluegrass group the Timber Rattlers will play there soon, and a trio from the University of Montana Jazz Program as well. The stage has a Yamaha grand piano at the ready for any acts who need it.

The offerings right now include “Thursty Ear” music nights on Thursdays; trivia on Wednesdays hosted by Lando; and stand-up comedy on Tuesdays; and on Fridays, a “dueling piano” night with Doug Olson and Josh Farmer with audience participation.

There will be some nights where they want to put the full focus on the music — a ticketed event where you can get food and beverages before the show and drink service during an intermission, perhaps. They held one recently with Erica von Kleist, a Juilliard-trained saxophonist who wrote and performed a one-woman comedy show. They’ve booked a September show with Quarteto Nuevo, a Los Angeles-based group that fuses classical, jazz and folk music from around the world.

Billadeau studied business and music, earning a master’s degree in music composition and music technology at the University of Montana, after which he taught in the program and led the tech program for years. He performs in the annual Piannisimo! concerts, and in 2018, the Missoula Symphony Orchestra performed his piece, “Last Best Place.”

While he’s familiar with the technological side of music, “there’s no replacement for the real, live thing.”

Regardless of the sound system, he feels “you’re never gonna get the energy, almost the spirituality in the music unless it’s live in front of you.”

The speakeasy is located below Pangea, the restaurant the team opened in the former Liquid Planet space on North Higgins Avenue. To find it, head into the alley — the entrance is on the west side of the building. They’ve been joking that “it’s the world’s longest soft opening,” Billadeau said, roughly one year’s worth from their opening last May, toward late 2019 when they began phasing in live acts at Stave & Hoop.

He feels that they’ve only just hit their stride in the last month, particularly since the Centers for Disease Control and Prevention announced that vaccinated people can gather safely. It was nearly at capacity on Thursday night, for instance.

The building was constructed in 1895 as the Garden City Bottling and Liquor Company and used as a basement since then. To retain the rustic, historic vibe, they’ve kept the original floor, trusses and exposed brick walls, “to have it feel like it could be 100 years ago in downtown Missoula.”

The lighting fixtures on the walls boast a vintage gaslight style and are kept dim to set the right mood. The stage is situated in the far end of the classic, narrow Montana space. The backdrop for the performers is a wall of interlocking bourbon barrel staves — the name of the bar, Stave & Hoop, refers to parts of a barrel — the staves are the vertical wood slats, held together by the metal hoops. The stage, meanwhile, is the “Stave Stage,” for added musical wordplay.

One of their recurring performers is “Doctor Doug” Olson, who has a doctorate in vocal performance from Indiana University, and leads choral activities at Sentinel High School. He performs regularly at Stave with Kelley Sinclair of Shodown; does a “piano bar” night, and started a “dueling piano” routine. It’s not a piano “battle,” more like a collaboration, where they trade off parts and verses — for instance, he and local piano regular Josh Farmer play together, and take requests from the audience via Venmo. Between their respective ages, they can figure out most tunes and one will lead. It’s meant to be a fun, interactive evening and people frequently sing along.

Olson said playing again “felt amazing. I hadn’t played out live for over a year,” and “I would say a lot of musicians who performed here in the last few months have said the same thing.”

Floridis, a veteran of venues of all types around Missoula for years, wrote in an email that “the audience definitely made us feel like we were part of the room, and at times it was a real listening crowd. I think there’s potential for the venue to have a very distinct feel given the physical make-up of the room, the basement feel and the acoustics. Often longer rooms are challenging for sound, but the ceiling composition seems to absorb things well.”

He pointed out that the hours for performances, from 8-11 p.m., are unique, too. “It’s post-brewery hours so it might be a mix of slightly older folks early in the night and then skew younger as the night goes on,” he wrote.

Stave and Hoop speakeasy is located at 223 N. Higgins Ave. The entrance is in the alley next to Office City on West Broadway.

To see the list of events, go to staveandhoop.com.