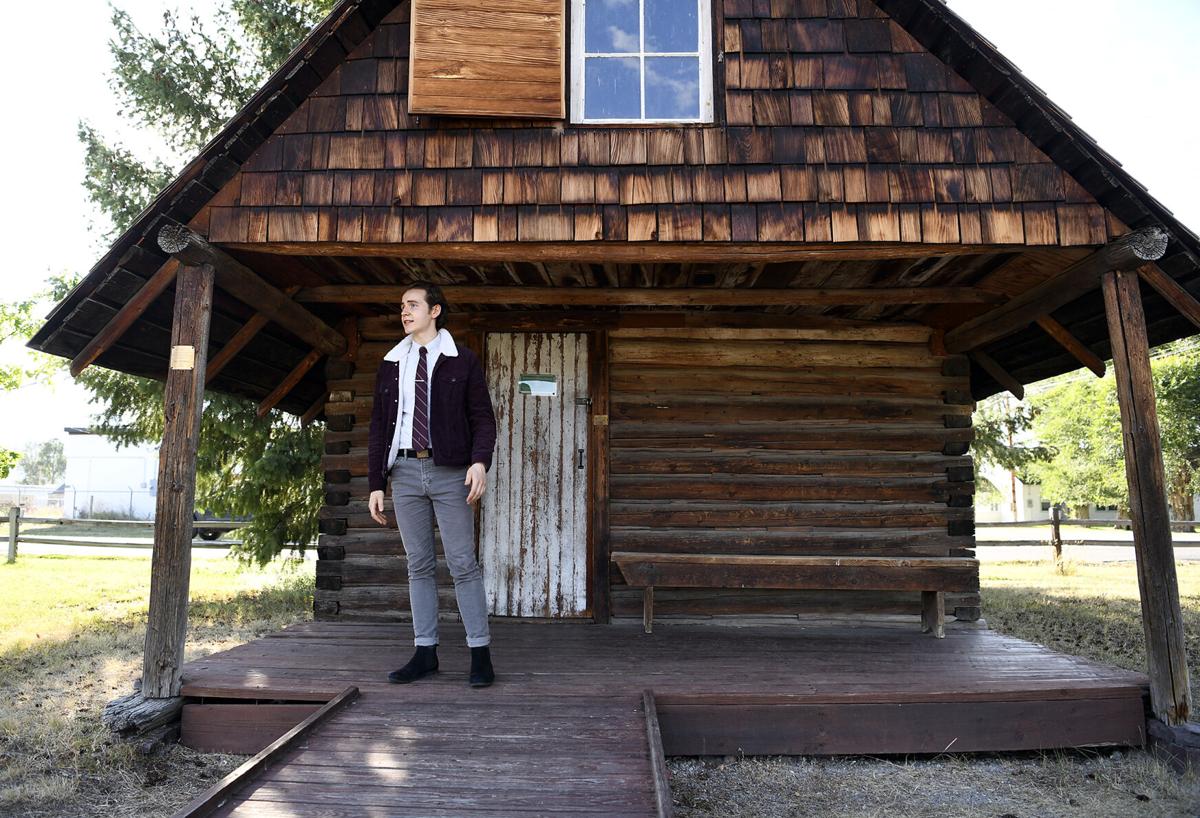 Actor Stephen Jay Clement rehearses a monologue at Fort Missoula. The Montana Repertory Theatre is presenting, "The Fog," an original play, at the Historical Museum at Fort Missoula from Tuesday-Sunday, Sept. 15-20. 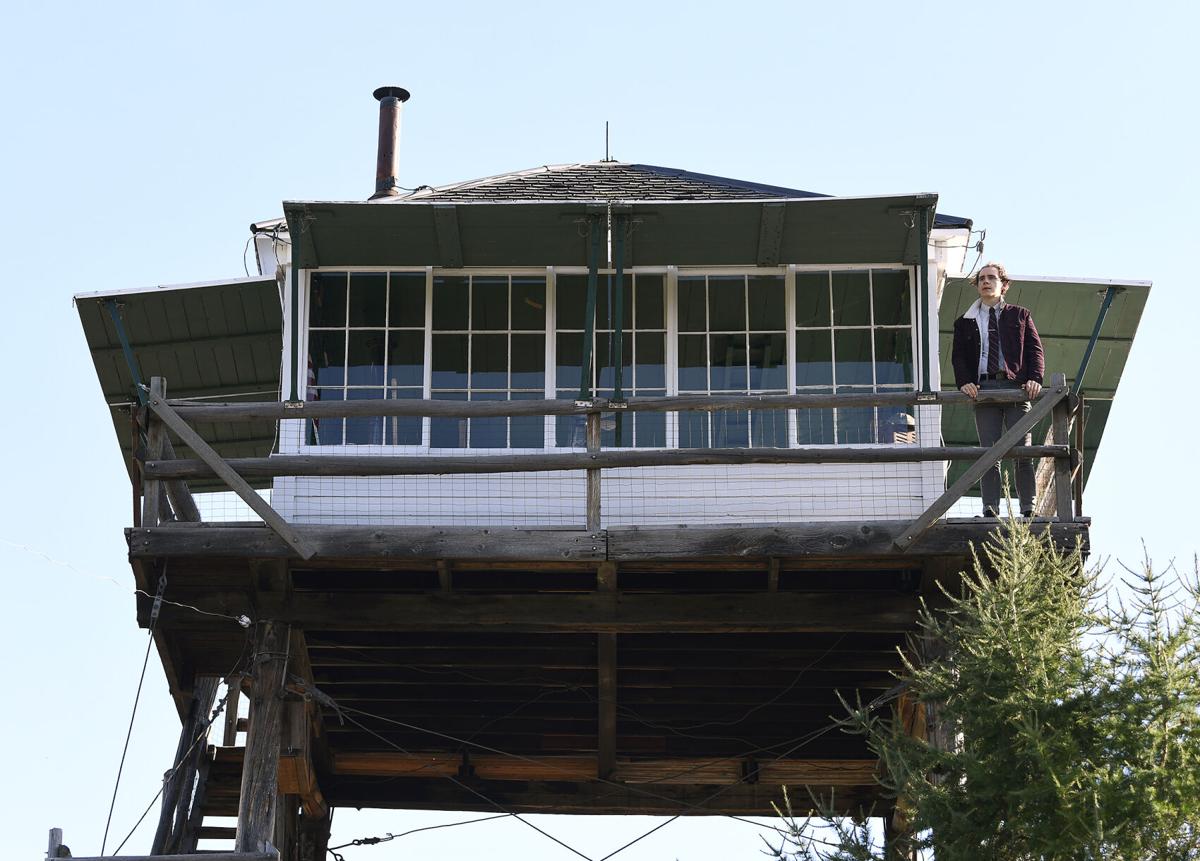 Actor Stephen Jay Clement rehearses a monologue at Fort Missoula. The Montana Repertory Theatre is presenting, "The Fog," an original play, at the Historical Museum at Fort Missoula from Tuesday-Sunday, Sept. 15-20.

As far as authenticity goes, it would be difficult for a set designer to rival a real lookout.

This particular fire tower was built in 1930 and used at Sliderock Mountain in the Rock Creek area southeast of Missoula.

In the early 1980s, it was brought to the Historical Museum at Fort Missoula. And next week, it will have a visitor: Gifford Pinchot, the first chief of the U.S. Forest Service. Well, an actor named Mark Plonsky, portraying him in "The Fog," a play that will premiere next week in an outdoors production by the Montana Repertory Theatre.

"We've had to rethink what theater looks like in this pandemic, and we've had to take a lot of creative license to make it happen," he said.

Before COVID-19, the Rep had been planning a series of site-specific, original short works at the Fort for the company's Plays on Tap series. That didn't seem viable once indoor locations were put off limits. However, he did still have that fire tower.

"I was able to reach out to a playwright, and say, 'Hey, I want you to write me a play in which none of the actors come anywhere near each other for reasons that don't have anything to do with what's happening now,' right, but for reasons that are part of the world of the play, 'cause if we can't do that, then we can't do theater," Legg said.

It happened that one contact, Jean Ann Douglass, had researched the Great Fire of 1910 and Pinchot, and knew of one aspect of his life that could be dramatized without any contact between the cast members — Pinchot believed that he was married to the ghost of his deceased girlfriend.

There's not much information about the marriage — Douglass said that Pinchot's family removed the relevant pages from his journal after he died. Yet she continued to think about the idea. What is the appeal to him, to have a "ghost" to come home to, that's his alone? she said. And what's it like for Laura, who may have loved the idea of an earthly afterlife at first, but then is unable to be around anyone else, or age, or grow? she said.

In keeping with the requirements the cast stay far apart from each other, she wrote a script that relies on monologues "looking at the interior journeys of these three people at this one point in time," while also keeping the cast at least 12 feet apart at all times, she said.

"I think those restrictions helped the creative process immensely," she said.

Beyond the tower, she wrote scenes with the actors on the tiered stairs, the path up a short hill, and a historic cabin nearby. Legg said the ability to work with the playwright to fit the story to the space was a gift, "as opposed to taking an existing script and trying to fit a square peg into a round hole. We got the playwright to make us a round peg."

They've held read-throughs and rehearsals on Zoom and FaceTime that Douglass can attend and work with them on different aspects.

Pinchot, beyond his marriage to Laura (played by Erin Agner), has been given the mission of building an agency that doesn't yet have a budget or forests to oversee, or that many employees.

"He has envisioned this Forest Service, and the forest system, and all these protected lands, but has currently no budget and no people and very little to oversee," she said, while offering the caveat that she's made the timeline slightly ahistorical.

The third character is a fresh and enthusiastic employee played by Stephen Jay Clement, a UM sophomore in musical theater and performance. Gil is a fresh college graduate in forestry who is moving to a new town for work.

"He's on his own journey of self-discovery that doesn't hinge on" Pinchot and Laura, she said.

"The Fog" is the first UM-related theater production since mid-March, when the Rep and the School of Theatre and Dance were forced to pause all their work.

"We've all just been waiting for this chance to get back into it — back into the work, as students and artists and everything in between," Clement said.

He said that is always a nice challenge to perform outside of the usual proscenium style seating.

"I think one of the greatest things that I've experienced so far is just the chance to have such an honest connection with the set, if we can even call it a set," he said, calling it "the most historically accurate representation of where we're supposed to be."

Douglass said that theater in New York is still shut down, with no date in sight when it can resume. Besides "The Fog," which she says likely reflects her own circumstances in some ways, she's written a play that will be performed on Zoom.

"Really early into the situation we're in right now as a country, he was thinking about ways that he could still make interesting work for the people in that town and not just pivot to doing things online like so many people are doing. To make something really unique and specific and there aren't a lot of people doing that anywhere, so it's awesome," she said.

The Montana Repertory Theatre is presenting, "The Fog," an original play, at the Historical Museum at Fort Missoula from Tuesday-Sunday, Sept. 15-20. All shows start at 7 p.m. Tickets must be purchased in advance at montanarep.com, and are limited to 50 per performance. They cost $20-$40. The play is roughly 40 minutes long. The cast and audience will be socially distanced. Audience members can bring their own chairs or blankets, but will be seated within designated squares. Masks are required during check-in but not after seating. For more information, go to the website.

What does "Missoula" mean?