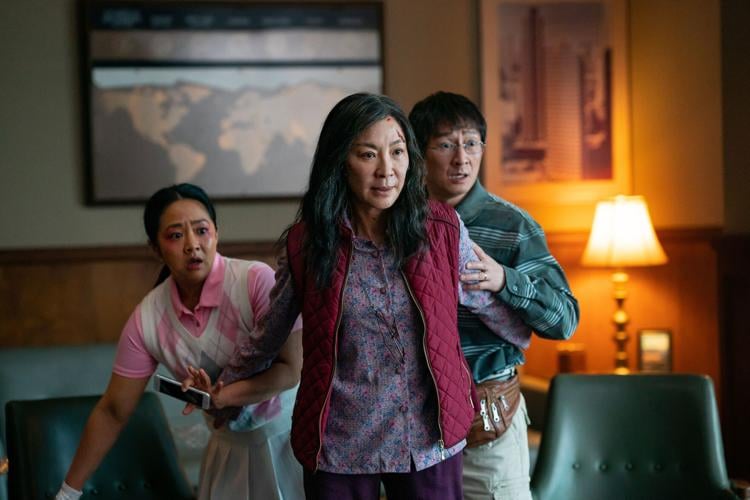 From left, Stephanie Hsu, Michelle Yeoh and Ke Huy Quan in "Everything Everywhere All At Once."

From left, Stephanie Hsu, Michelle Yeoh and Ke Huy Quan in "Everything Everywhere All At Once."

It was a weird year for movies.

While predictably, the top 10 highest grossing domestically released films of 2022 were all sequels or major franchise installments (“Top Gun: Maverick,” “Black Panther: Wakanda Forever,” “Avatar: The Way of Water,” etc.), the most successful arthouse/indie offerings were only peppered with a handful of known directors (Baz Luhrmann's “Elvis” and Steven Spielberg’s “The Fabelmans”), but largely dominated by relative newcomers (Olivia Newman’s “Where the Crawdads Sing” or Olivia Wilde’s “Don’t Worry Darling.”)

And while maybe that’s not truly unusual, looking back at previous years, and previous successes (Bong Joon Ho’s “Parasite," or Greta Gerwig’s “Lady Bird”) it is odd to see the number of high profile and highly anticipated films that didn’t quite meet expectations.

1. “Everything Everywhere All At Once”

3. “Where the Crawdads Sing”

7. “The Banshees of Inisherin”

Yes, I’m looking at you, “Babylon.” You too, “Amsterdam.” Sorry to disturb your slumber, “Three Thousand Years of Longing.”

Even the big hits by known filmmakers weren’t quite as big as many of us thought they’d be. Jordan Peele’s brilliant neo-Western sci-fi horror “Nope,” while wildly successful by any measure, was not quite as record-breaking at the box office as we had hoped. (It is worth noting however, that aside from our brief sub-run of the “Top Gun” sequel and the aforementioned “Elvis,” “Nope” is the only other film in the national top 20 that made it to ours).

Other year-end releases like Spielberg’s “The Fabelmans” and Martin McDonagh’s “The Banshees of Inisherin,” again, did fine, found audiences and made plenty of people’s top lists, but compared to previous years, their theatrical engagements fell a little flat. Certainly the fact these titles moved quickly to streaming platforms didn’t help their theatrical runs.

By the same token, several films that would have been likely holiday season hits suffered from extremely limited windows for theatrical engagement. Some, like the Netflix releases of Noah Baumbach’s “White Noise” and Guillermo del Toro's “Pinocchio,” came and went so quickly that we barely had time to play them before they were streaming. Other films like Rian Johnson’s “Glass Onion: A Knives Out Mystery,” and Matthew Warchus’ stunning “Roald Dahl’s Matilda the Musical” were never available to the Roxy, although one could imagine them playing very well to the holiday crowd.

So, enough about what might have been and what wasn’t, let’s talk about the biggest hit at the Roxy in 2022: an absurdist martial arts-driven action flick in mostly Cantonese and Mandarin, set in a multiverse and featuring a cast of mainly Asian-American performers. “Everything Everywhere All At Once,” a sleeper hit, directed by two guys named Daniel (Scheinert and Kwan) came out of nowhere to not only clench the top spot of Roxy’s 2022 box office, but it also unseated the previous leader, Greta Gerwig’s “Little Women.”

And when I say “unseated,” I mean it knocked the March Sisters onto their petticoats with a solid roundhouse kick. Essentially a drama about mother/daughter relationships, “Everything Everywhere” is brimming with kung fu fights and semi-surreal encounters. Propelled by a phenomenal performance by Michelle Yeoh, the film became a sensation across the country during its spring release, the timing of which lined up magically with the decline of the omicron variant in the U.S.

This, coupled with the incredibly positive word-of-mouth and the insistence that you have to see it to believe it, brought huge crowds of (mainly) young people to the cinema, spurring a collective experience, and the great catharsis that follows — basically, the magic of the movies. Yeoh is so wonderful in the film, and her superheroine-ness is like nothing anyone had ever seen. Nothing, that is, perhaps, since Yeoh’s previous record-breaker which still stands today as the most successful foreign language film released in the U.S., another martial arts flick that took everyone by surprise: Ang Lee’s “Crouching Tiger, Hidden Dragon,” released in 2000.

The success of “Everything Everywhere” as a big screen crowd-pleaser was rivaled only by an exhilarating film that landed on the tippy-top of my personal list of favorites for 2022 — S.S. Rajamouli’s absolutely mindblowing epic 3.5 hour action-adventure buddy picture “RRR.” Set in 1920s imperial India, and pitting two historical revolutionaries against the British Empire, “RRR” is a nonstop spectacle of action, and utterly imaginative story structure, fueled by two extremely charismatic performances by N.T. Rama Rao Jr. and Ram Charan Teja as legendary Indian heroes Komaram Bheem and Alluri Sitarama Raju. The film’s scale demands large-screen viewing, and like “Everything Everywhere,” benefits greatly from a packed house. Both times I watched it at the Roxy with full and nearly-full houses, the rapt crowd lost their minds to the brilliant action (and musical numbers!) and just couldn’t keep their joy and elation to themselves. Much whooping and much cheering was had by many.

And really, isn’t that what it’s all about, what keeps bringing us back for more? All of my favorite movies in 2022 and all the films I know people really, really, really liked filled us with a sense of wonder, both for the marvelous and heartbreaking condition of being human, and the magnificent spectacle of cinema. A lot has been made lately of the decline of cinema, the threats that the industry is facing — a doom and gloom forecast that sounds a lot like the worries that television brought about in the 1950s, and the fears the VCR raised in the 1980s. But even with all of the changes technology has brought, and how the industry is reshaping itself every day, no one knows where any of it is headed. Perhaps I’m foolish to believe that cinema is forever. But how else can you explain the feeling that keeps coming back, time and again, when the lights go down.