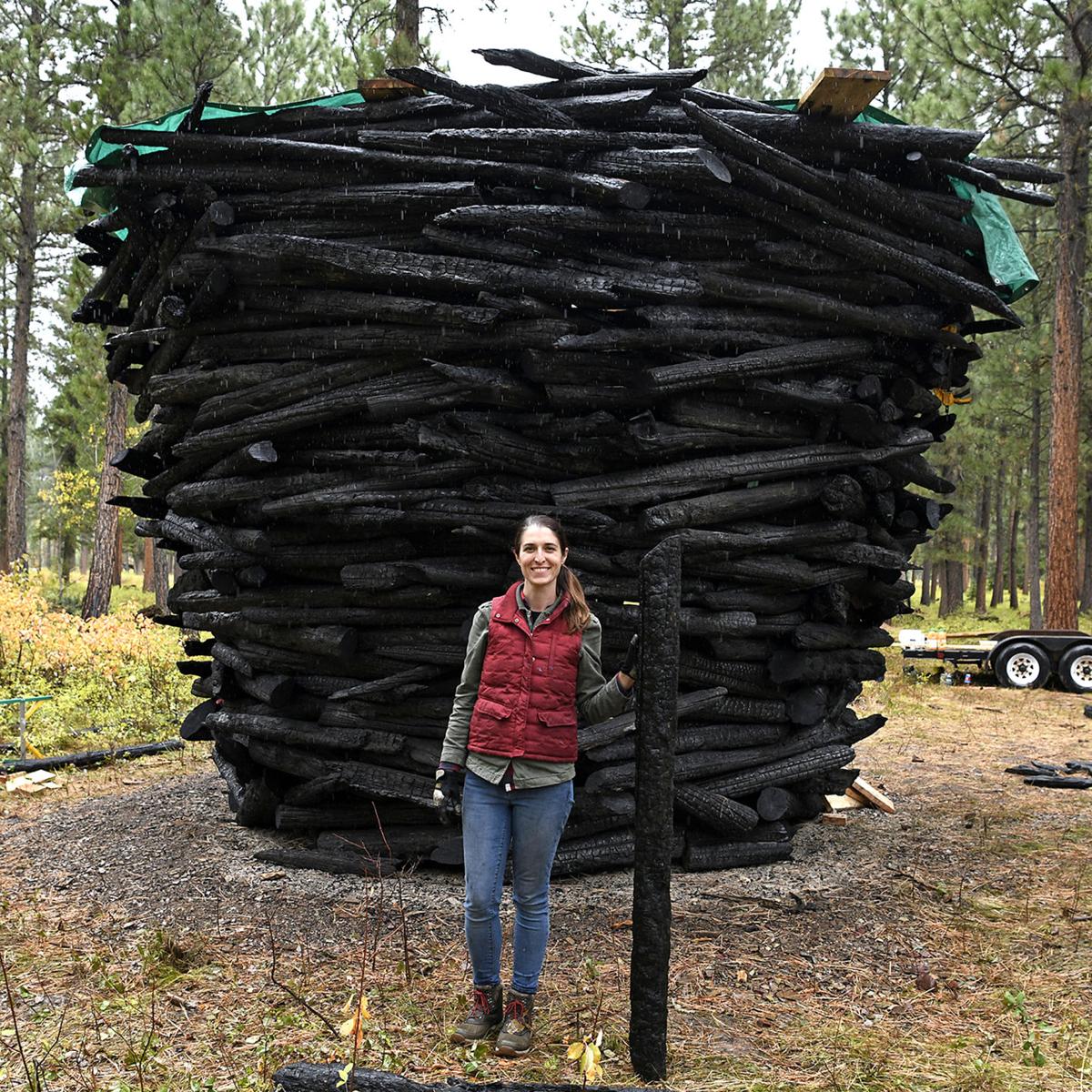 Alison Stigora stands in front of her work "Clearing," a 13-foot tall structure made of burned pine wood from forest fires at Blackfoot Pathways: Sculpture in the Wild, in Lincoln. The artist, who is from Pennsylvania and is based in Seattle, said, “It’s always been a dream of mine to work in a place with wildfires.” 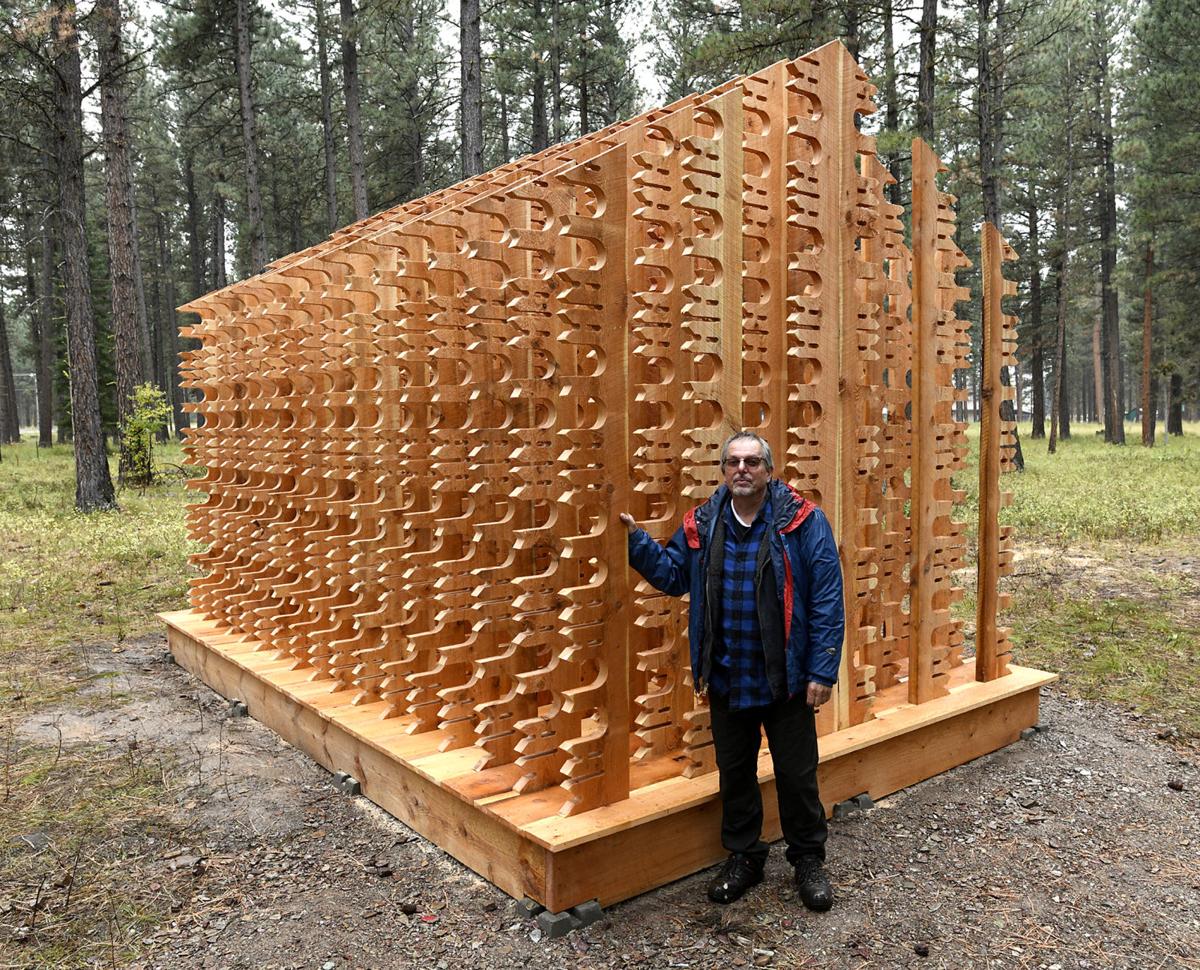 U.K. artist Stuart Frost stands in front of "A Place is a Place is a Place," his newly completed work at Blackfoot Pathways: Sculpture in the Wild. The piece was inspired by Lincoln's logging and pioneer history. 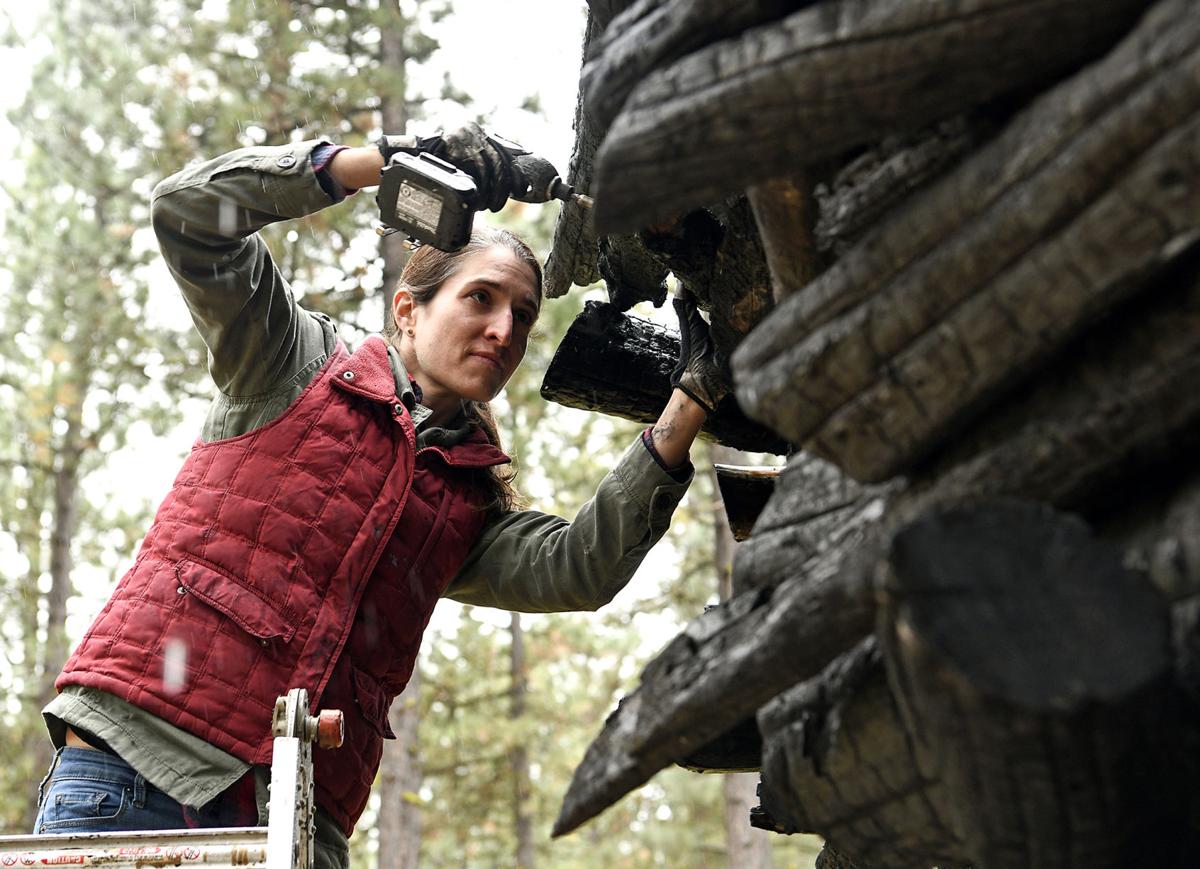 Alison Stigora drills in additional supports for her new piece, "Clearing." “It’s a visceral, full-body experience when you’re faced with a wall of char," she said. 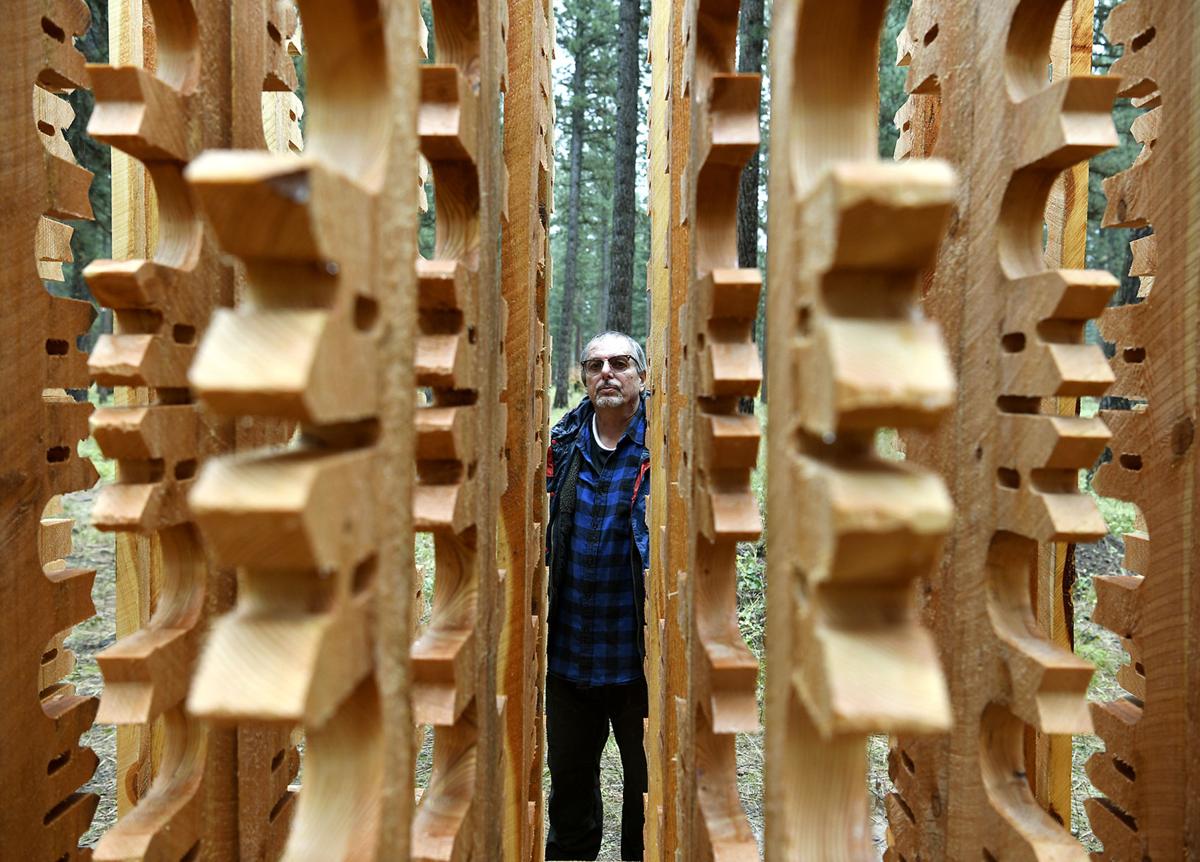 Frost had 110 Douglas fir planks cut by computer-programmed machines at fabrication shops in Helena. The boards were mounted on a foundation to mimic the shape of a log cabin. 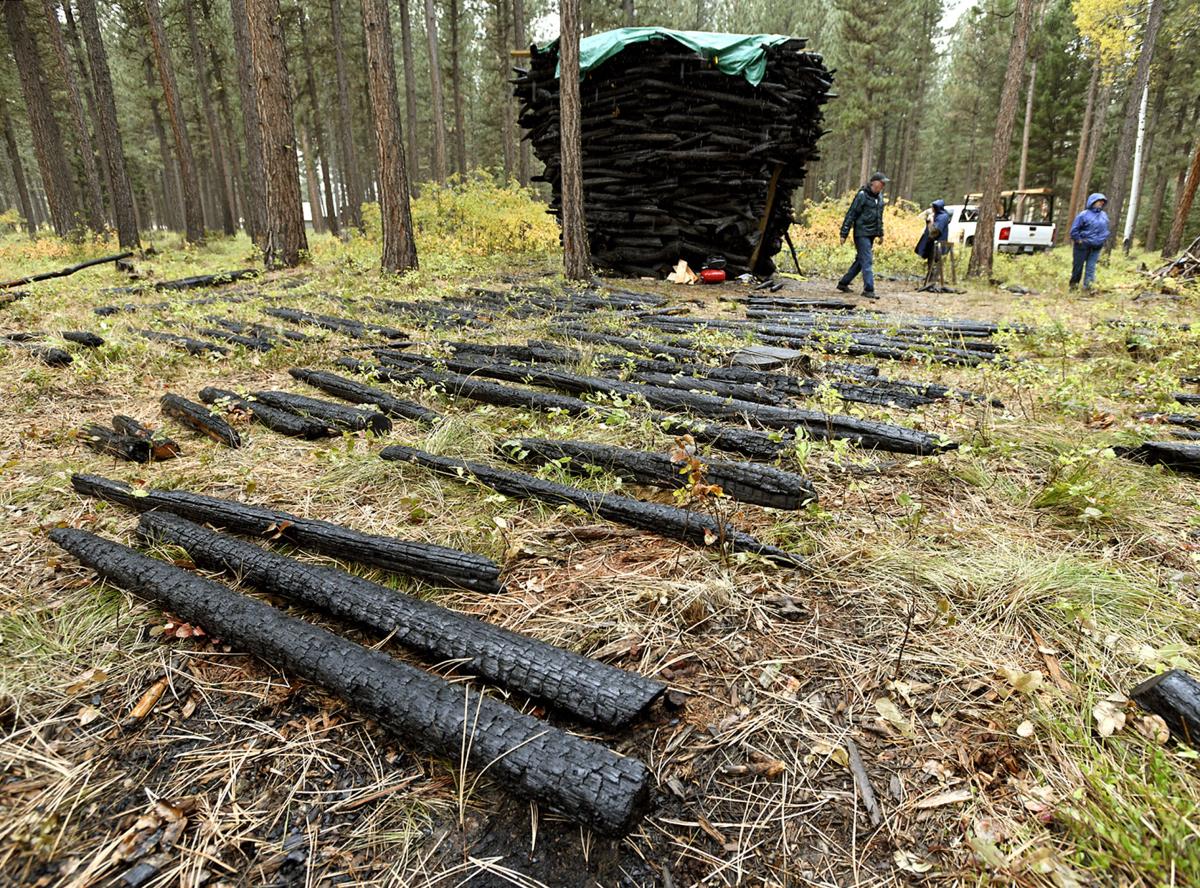 Pieces of burnt wood lie on the ground near "Clearing." Thursday, Stigora and her team had a tarp over the open top of the sculpture to finish building the interior, which is paneled in bright, new pine planks. “I wanted to create a contemplative space for people,” Stigora said.

Alison Stigora used to have to burn her own wood for sculptures. As an artist in Pennsylvania, there weren’t wildfires to create naturally charred chunks of wood, so she overcame her nervousness of starting fires and handling burning wood to build bonfires with friends, pulling out pieces as they burnt just so.

“The texture, and that velvety blackness and that it’s been through something,” Stigora said. “It’s always been a dream of mine to work in a place with wildfires.”

She got the opportunity this summer, as one of two resident artists at Lincoln’s Blackfoot Pathways: Sculpture in the Wild art park. Her piece, “Clearing,” opened at the end of September, along with Stuart Frost’s “A Place is a Place is a Place.”

The two join 17 other artists who’ve worked in the park and around a dozen sculptures built since its opening in 2014.

Stigora’s “Clearing” used her dream material — naturally burned wood, from wildfire up Copper Creek and Beaver Creek. Around a half-dozen volunteers filled three 24-foot trailers with wood they then schlepped back to the park.

The wood was laid out in the forest near a huge inverted pyramid frame Stigora built. Then, piece by piece, she bolted the burnt wood onto the frame, rising up in a 13-foot-tall black tornado of jumbled Lincoln logs.

“It’s a visceral, full-body experience when you’re faced with a wall of char,” Stigora said. “It feels like it’s leaning over and going to crush you.”

She contrasts the foreboding exterior with an interior paneled all in bright, clean pine and an open top, to provide a peaceful, sunlit room for meditation. The outside-to-inside contrast is a subject Stigora said she’s worked with before, but not at this size.

“It is an imposing piece, but that scale I think is necessary when you’re in a space so vast,” she said. “It definitely feels … bigger than I anticipated.”

Stigora wants viewers to feel overwhelmed when they walk up to “Clearing,” then at peace when they enter the bright, quiet interior with built-in benches.

“I wanted to create a contemplative space for people,” Stigora said. “When we seek those moments of clarity in our lives, it’s often after a fiery moment.”

The piece was purposefully placed in a clearing, to match the name, but Stigora also found poetry in a cleared stretch of forest — naked, like after a fire came through — as well as a chokecherry bush that ended up sitting right behind “Clearing.”

“Chokecherry is one of the first plants that grows back after wildfires,” she said. “It’s a lot about that destruction, creation process.”

Late last week Stigora and her team of volunteers were putting the finishing touches on “Clearing” in the pouring rain, just before the first snow hit over the weekend.

They had a tarp over the open top of the sculpture to keep it dry while they affixed pine planks to the interior of Stigora’s sculpture. Pieces of unused burnt wood still scattered across the clearing.

It turned out, Stigora grimaced, that, however dirty burnt wood could be when dry, it was even worse in the rain, ruining gloves, gumming up jackets.

Stuart Frost, however, was glad he finished up his sculpture the day before the rain, even though his material was much cleaner.

“A Place is a Place is a Place,” named as he walked through the woods Thursday afternoon, twins with “Clearing” in how it recalls log cabins, although in a much different way.

“A place is a place where you find yourself,” Frost said. “It’s something that gets you thinking about places, as opposed to permanence.

“I wanted something that was open, where people can go away making their own history with the work.”

Frost, a U.K. artist who’s now based out of Norway, has done many installation pieces of this type, using natural materials and leaving sculptures to sit in their environment.

He visited Lincoln in June, and as is his method, Frost came with no preconceived notions or ideas.

“I wanted to come and let this place tell me, give me some clues, of what to do.”

His main inspirations came from old logging saws and log cabins — the history of people using the forest for their own gain, despite being dependent on it to live. This combined into a house made up of saw blades.

Using a laser cutter, Frost created a scale model of wood planks cut with saw teeth that stood up vertically to create the shape, but not function, of a cabin.

He got the OK from artistic director Kevin O’Dwyer on his idea, and started figuring out how to make it full-size.

A foundation, 16 feet by 10 feet, was built “like you would build a house,” Frost said, for the planks to be stood up on.

Twelve-foot planks of wood were sent to fabrication shops in Helena to be cut with a computer-programmed machine. Frost said they chose rough-cut Douglas fir coated in linseed oil.

The wood planks were arranged on the foundation so, from a distance, “A Place” has the appearance of small house. Upon closer inspection, it becomes clear it’s something else entirely, but exactly what, is up to the viewer.

“It’s got a visual identity, but if you don’t see a saw blade, you see it as something else,” Frost said. “It almost feels like totems, somehow.”

Frost and Stigora were both heavily inspired by the art park’s location in their works — Frost, from logging history and Stigora from the natural life cycles at work in the forest. Turning sawblades into homes, or forest fires into chambers of reflection — this is the artistic loop of Sculpture in the Wild, where if you spend a few minutes, you can find your eyes and mind drawn to nature in a new way.

After wandering through the woods just behind Lincoln’s main street, viewing massive sculptures made of wood and metal that blend in and stand out from the landscape in distinct ways, notice how your eyes wander to other roadside stands of trees.

Is that a sculpture peeking through the pines?

No, just a pile of wood.

But it could be, you think to yourself.

“(Locals) have a relationship with burnt wood,” Stigora said. “To turn it from a cast-off item into a place of beauty.”

The Sculpture in the Wild is located in Lincoln, Montana at 1970 Sculpture Way. The park is open from dawn to dusk every day.