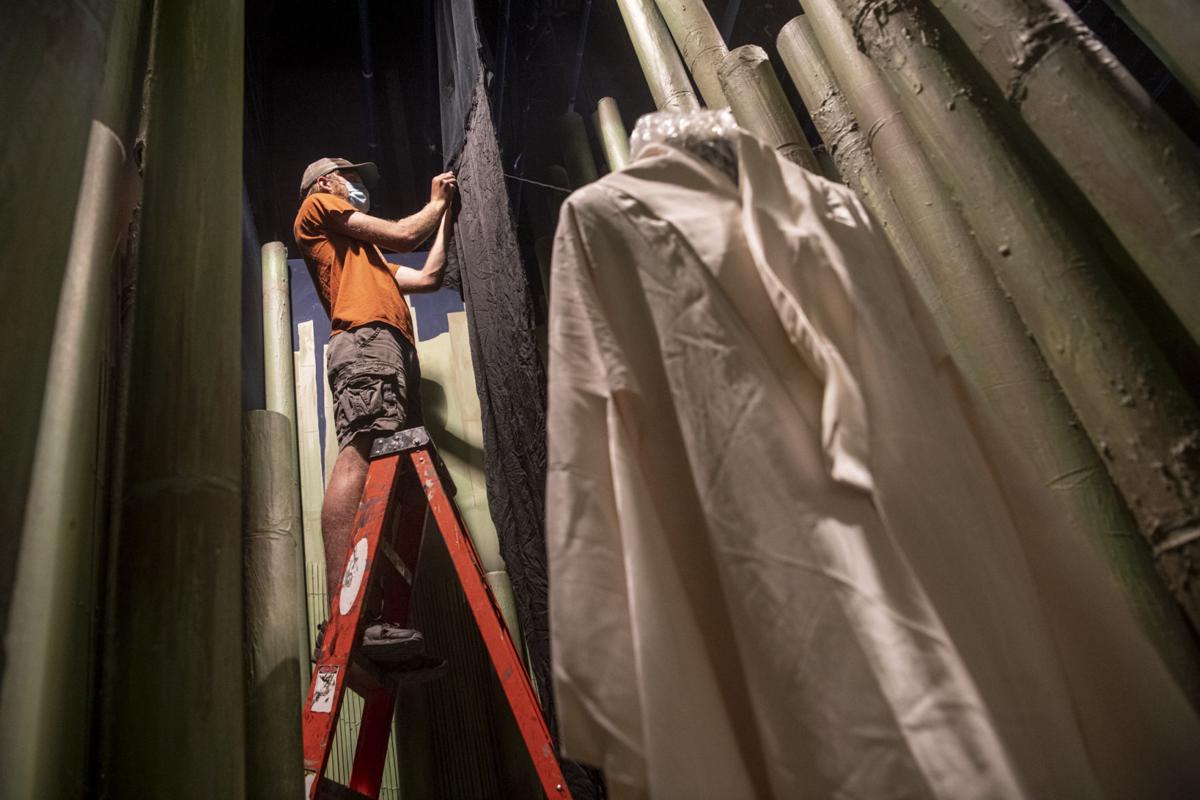 Trevor Monsos helps set up one of the rooms at the University of Montana's haunted house in the PAR/TV Center's Montana Theatre on Wednesday. 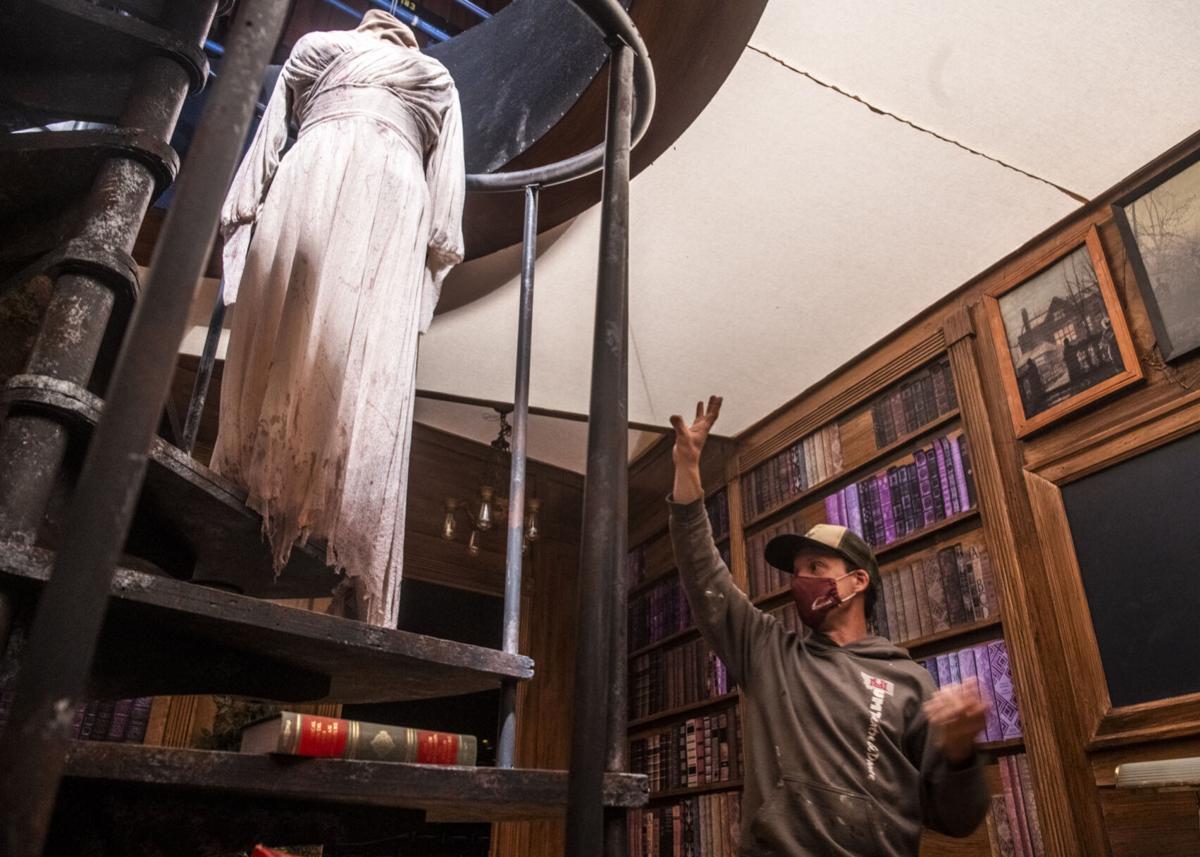 Brian Gregoire explains some of the workings of the set design of "The Haunting of Hill House." 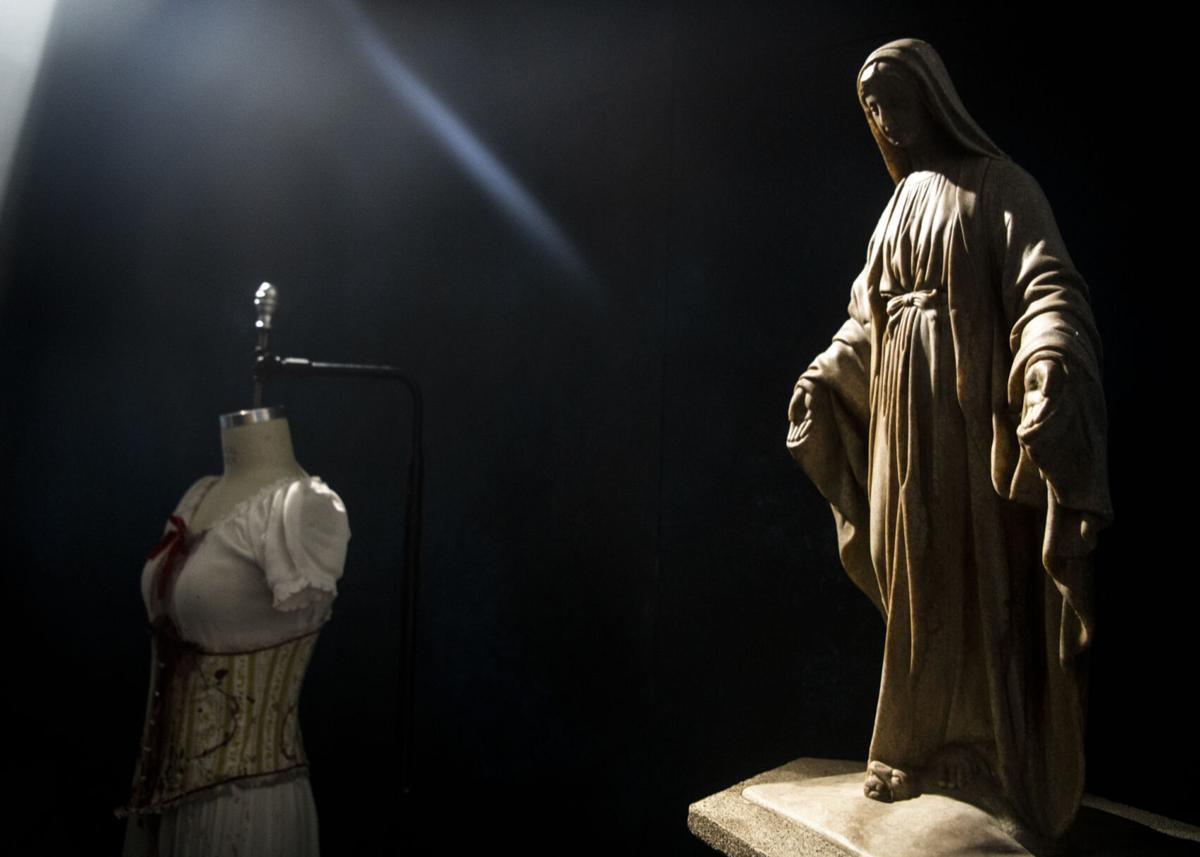 The first room is designed with a Dracula theme.

Trevor Monsos helps set up one of the rooms at the University of Montana's haunted house in the PAR/TV Center's Montana Theatre on Wednesday.

Brian Gregoire explains some of the workings of the set design of "The Haunting of Hill House."

The first room is designed with a Dracula theme.

A scene shop and a full-sized theater make for a good place to build some haunted houses.

That’s what the University of Montana School of Theatre & Dance did for “Haunted,” a series of four “rooms” in the Montana Theatre.

Besides folklore tales of vampires and cannibal witches, you’ll get to see sets up-close and the “magic” of how theater works.

It's a way to “let our audiences see something they don’t normally see … which is to actually see a show in motion and what happens backstage,” said Brian Gregoire, scene shop manager and technical director.

This is the school’s first theater production of the academic year, and follows Dance on Location, held last month outside. “Haunted” is the first show since 2019 in which the school has invited the public back into the PAR/TV Center, although there are no actors present in the rooms.

The four “immersion experiences” are rooted in a diverse set of stories from around the world. Rather than setting students’ imaginations loose on traditional Montana haunted house staples like horror movies, they needed to look back to literature, myths and legends.

You get to see the backstage of the Montana Theatre along the way.

In the “Haunting of Hill House,” you enter a study with a spiral staircase in the center. The wooden walls are lined with bookshelves, but the shelves are “stacked” with digital images of book spines that the audience would read as “real” if they were seated out in the audience. The staircase appears to be metal, but the steps are wood. The ghost (spoilers ahead) will appear on the stage, and video projections will help bring a picture on the wall to life.

For Yuki-Onna, they constructed a bamboo forest, deliberately resembling a maze whose floors are brushed with piles of fake snow. The 150-some trees are made from “carpet cobs,” the centers of large rolls of carpet.

The other goal is that the story needed to be conveyed only through design, sans text. The ghost (a mannequin in a white dress) will make an appearance, although Gregoire cautioned that they’re trying to show the workings of theater, not fake you out by slathering everything in fake blood.

While the school had long been throwing around the idea of a haunted house, during the pandemic last year it was a project for the students to work on and get design experience without the logistical hurdles of a cast and audience. “They could see their design go from paper into real life,” Gregoire said.

With the help of an usher, your pod will get the full arc of the Dracula story, from asylum to the courtyard where Lucy gives in to the vampire’s powers, Gregoire said. With the help of audio and lighting, you’ll get the idea of Renfield locked in a cell. They built an oversized coffin that will make an appearance, too.

The students worked on the design concepts in Scenic Design II with professor Alessia Carpoca last year. Their peers in a scenery construction class built them with the school’s tech staff.

Jacquelyn Simmonis was assigned Baba Yaga, a female ogre who eats people. The room, filled with actual trees (mostly pine), is the graduating senior’s final project toward her Bachelor of Fine Arts degree in technical theater with a specialization in scenic design and props.

If you don’t know who Baba Yaga is, don’t feel bad. Simmonis did plenty of research into the variations of the folk tale, too.

“I definitely leaned toward the cannibalistic side of her, and the creepy witch vibes, since we’re doing a haunted house theme,” she said.

Without having to use actors, the room will give you a general sense of the legend — you’ll walk into the forest, which has an artificial sense of depth courtesy of mirrored material strategically placed on the walls. A red light will cast a silhouette of the ogress. You’ll hear someone reading poems about Baba. You’ll have to make a choice on your journey — veering toward her house, set atop chicken legs? Or the other path.