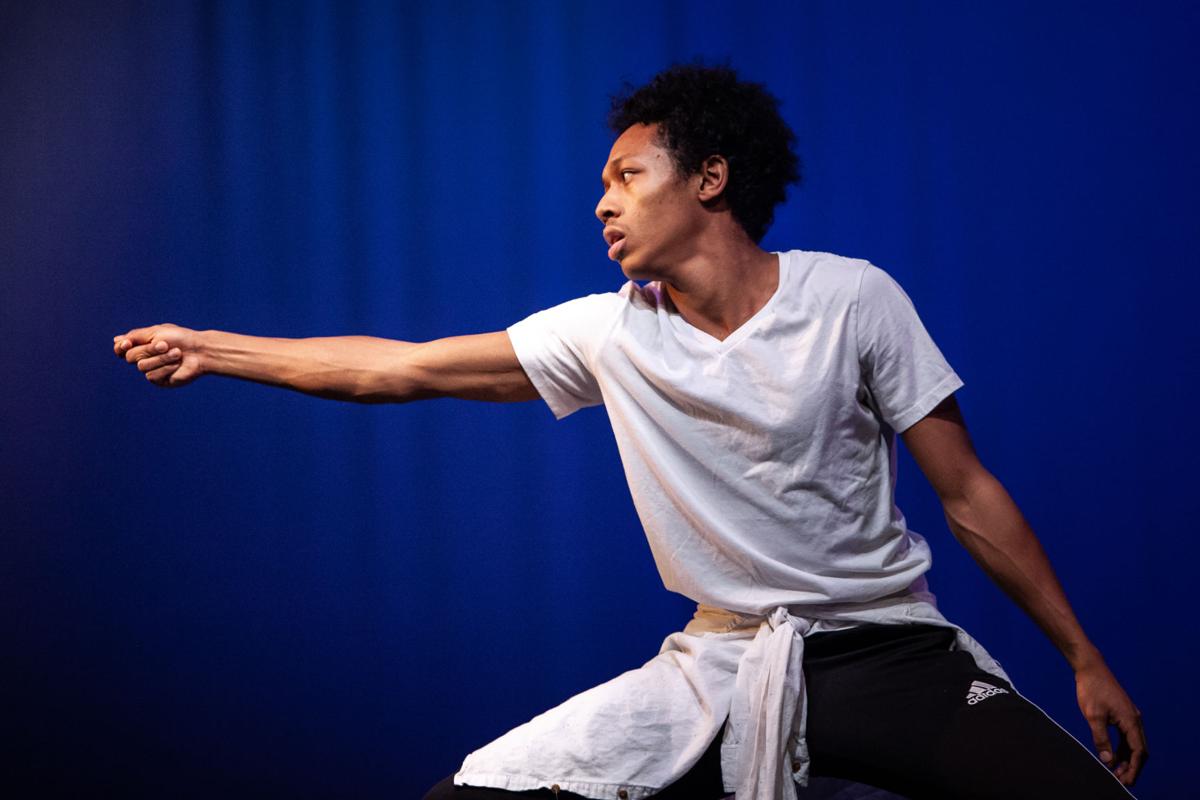 Elijah Fisher performs the dance "Weight of the World" in a final rehearsal before Studio Works, the November studio performance from the University of Montana School of Theatre and Dance. Fisher is set to perform his newest work, "TIRED|T1RED," at the American College Dance Association Benefit Concert at UM on Friday and Saturday. 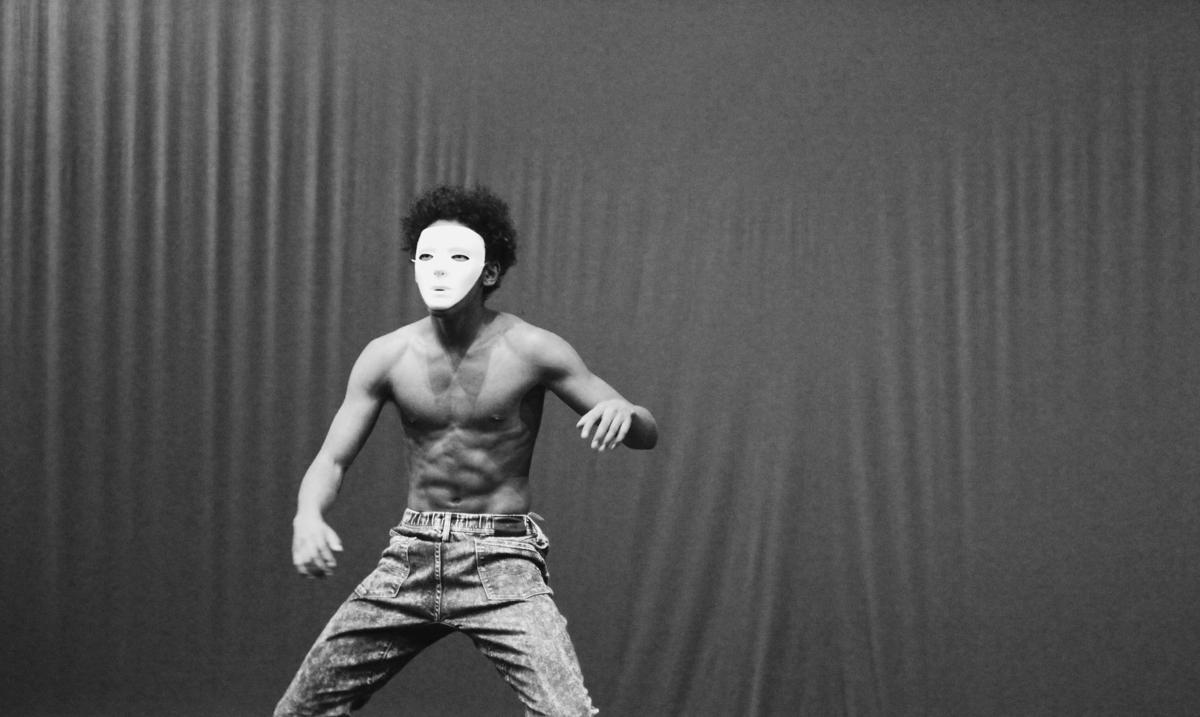 Elijah Fisher performs the dance "Weight of the World" in a final rehearsal before Studio Works, the November studio performance from the University of Montana School of Theatre and Dance. Fisher is set to perform his newest work, "TIRED|T1RED," at the American College Dance Association Benefit Concert at UM on Friday and Saturday.

University of Montana dance students are inviting the Missoula community to get a sneak peek at their original works that will be performed at the region’s biggest dance conference of the year.

The 17th annual American College Dance Association Benefit Concert features student and faculty choreographers’ work slated to be performed at this year’s Northwest Regional Conference, which will be judged by internationally renowned artists.

Performances at UM are set for Friday and Saturday at 7:30 p.m. at The Open Space and donations of $5-10 are suggested.

The event has a celebratory atmosphere, said Brooklyn Draper, visiting assistant professor of dance at UM, and features choreography that hasn’t been seen on a big stage.

“Some of the works are from the main stage performances, but a lot of them are coming from, for example, the Creative Practice course the students took last semester, so they’re pieces that haven’t necessarily been seen by the public quite yet.”

The event is a huge help in getting students in the School of Theatre and Dance to the annual ACDA conference, Draper said, adding it covers fees for attending the conference as well as travel and hotel costs.

The conference is a major networking and career opportunity for the students, who will eat, breathe and live dance for three days in March at Gonzaga University in Spokane.

“They can start to make connections not only with other choreographers or teachers, but also with other dancers,” Draper said. And the adjudicators are some of the most respected professionals in the field, so students will receive feedback from the top voices in the industry.

Elijah Fisher, a second-year MFA student in the School of Theatre and Dance, will be performing his work, “TIRED|T1RED,” which he started choreographing in his Creative Practice course last semester.

The idea for the piece, which was “inspired by the state of exhaustion that he exists in as a black and Filipino person in predominantly white spaces,” has been brewing for a while, he said.

“I feel like I’m tired all the time and I don’t think I’m the only one. So many of us are spread so thin in the way that we work and sometimes it feels like it has to be that way.”

His high-energy choreography and continuous movement throughout is meant to evoke the same feeling of tiredness in the audience.

“The song itself just feels like it’s moving quickly throughout and my idea was, I want the audience to feel as tired as I am,” he said.

Fisher said when he was growing up in the Bay Area, diversity and his identity weren't things he had to think about.

“Everybody around me kind of looked like me, and my family, they looked like me,” he said, adding when he moved to Portland for undergrad, he had to navigate living in a mostly white community. And the diversity only decreased when he came to Missoula.

“For me, figuring out how I can move in these spaces is that I adapt,” he said. “But I don’t allow myself to take up as much space as I feel like I actually need.”

Fisher said identity is something he’s been exploring recently, adding he uses a mask during his performance to represent some of the internal struggles people of color go through, feeling like they’re either too black or too white.

He said for him, the mask could represent almost any identity because all minorities have to accept some amount of whiteness in order to navigate through life.

“I do have some whiteness in me because it is part of the environment, it is a part of me and I use it to survive and to interact with the people who are around me,” he said. “These are the people I exist with and it’s really not about being black or white or any color, it’s more about recognizing this is a part of me and we are all connected in some way.”

Fisher, who is in the acting program, said he only started dancing five years ago, but fell in love with it immediately.

“I found myself late at night watching dance videos on YouTube for hours,” he said. “It was mostly hip-hop. I would teach myself just by playing the video and using a mirror.”

As a child, he said he never thought to try theater or dance because he never saw anyone who looked like him doing it.

“I grew up doing sports because I thought theater was not for me. It was for everybody that wasn’t me.”

He said now, choreographing dance is a way to create that representation he was missing as a child.

“The ultimate dream is to create a school for more communities of color to feel like they can come and do arts.”

His performance at ACDA will be the first time his dancing is adjudicated, but he’s found a strength in creating and performing this piece that he didn’t know he had. He hopes his choreography makes people think twice about their identity and if they ever have to put on a mask to walk through society.

“I am really nervous, but I’m also excited and that’s exactly where I want to live.”

The 17th annual American College Dance Association Benefit Concert is set for Friday and Saturday, Jan. 31 and Feb. 1 at 7:30 p.m. at the Open Space in the PARTV Building at the University of Montana.

Tickets will be at the door, with a suggested donation of $5-10. For more information, visit umt.edu/umarts/theatredance/.

Arts in Missoula: Last weekend of doc fest, a new play and an art talk

Sonic artist to take over PA for Washington-Grizzly performance