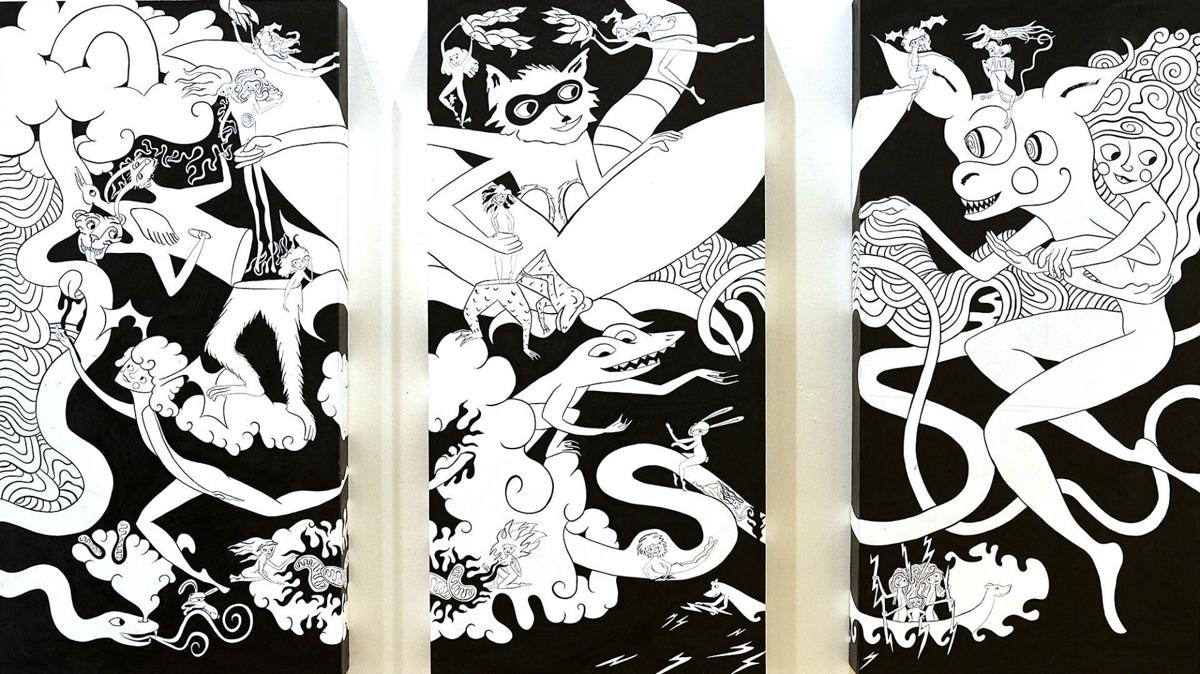 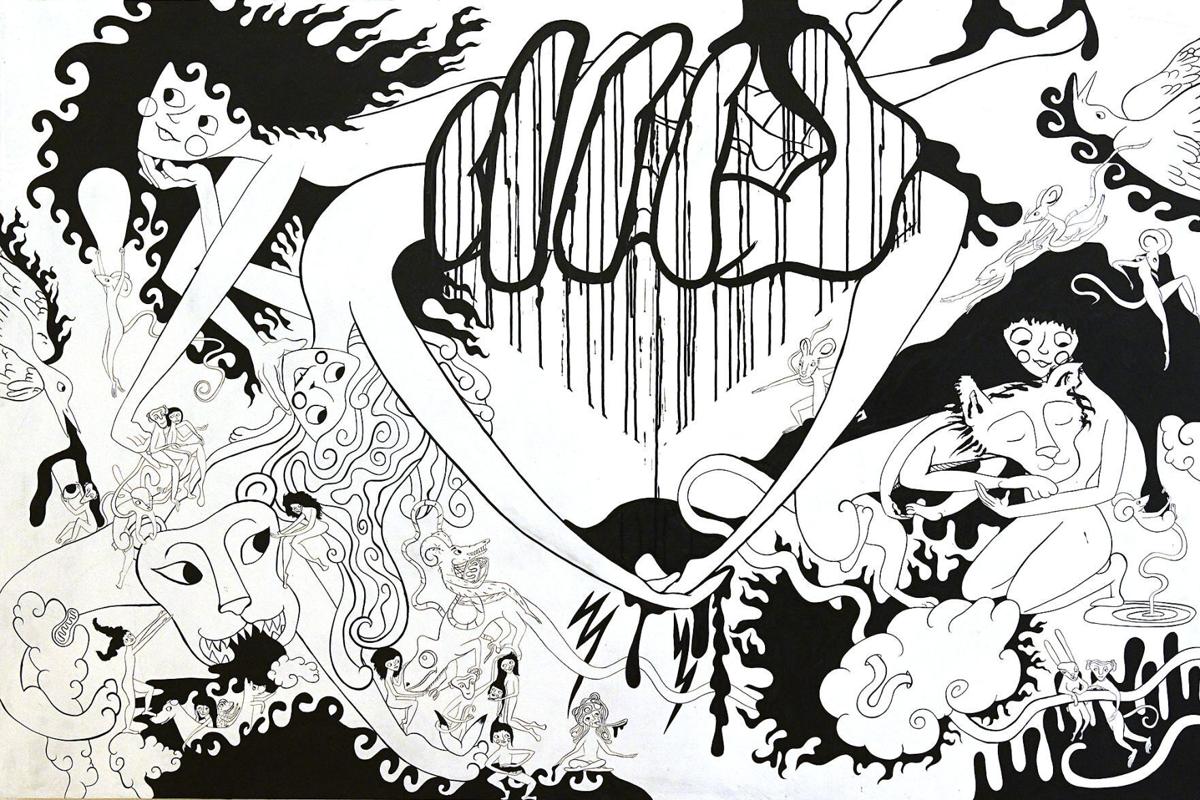 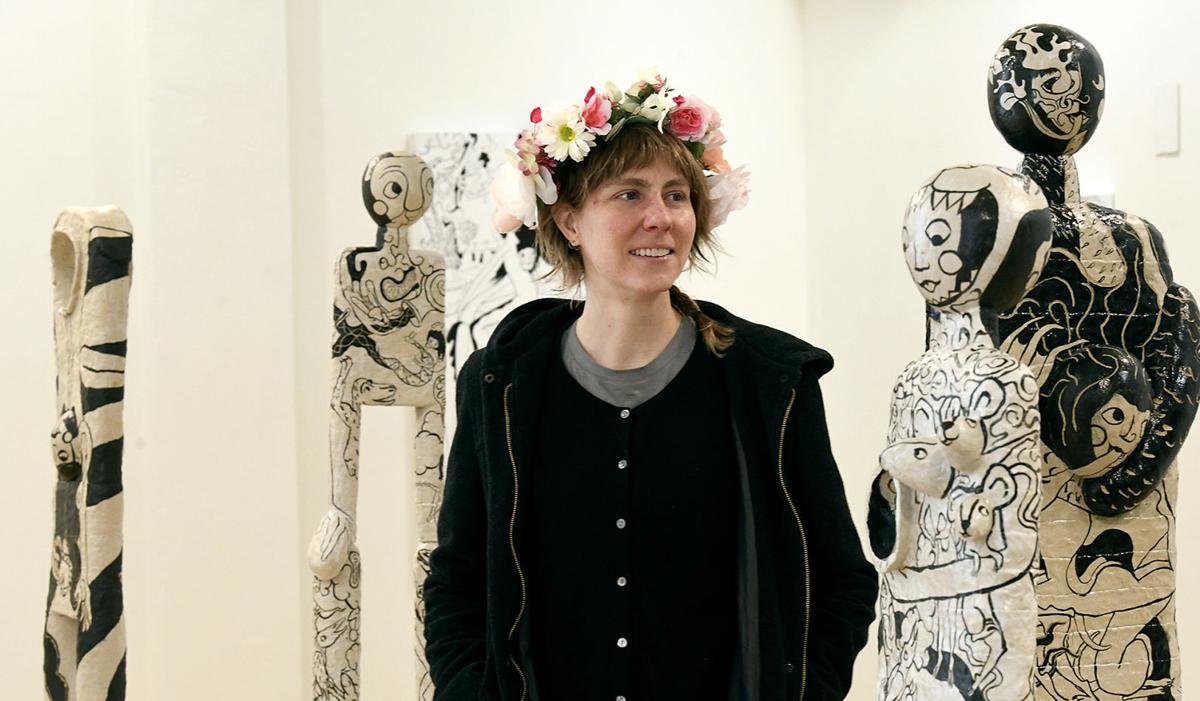 Michelle Postma, a University of Montana MFA candidate, is showing her thesis exhibition at the Zootown Arts Community Center.

Michelle Postma, a University of Montana MFA candidate, is showing her thesis exhibition at the Zootown Arts Community Center.

Creatures and figures entangle themselves in purposeful chaos, filling the space of the Zootown Arts Community Center’s main gallery with a splash of inky emotion and story.

“Nothing is off limits. That’s one of the coolest things about art; it’s whatever you make it,” artist and University of Montana student Michelle Postma said. “I feel like artists are kind of like amplifiers — artists take everything in and then they put out, they amplify the parts they think are important.”

Postma’s Master of Fine Arts thesis exhibition titled “Heart Vomit and the Dream Army” showcases the artist’s thoughts and emotions through a library of symbols and characters she’s developed. She uses the paintings and the statues to depict her meditations on the ups and downs of life.

In the corner of one painting mice play with mitochondria and in another a girl attempts to see through the eyes of an owl. In one piece, the eyes of a girl and a lizard-like creature were literally connected and Postma chuckled, saying they were “making eye contact.”

In another painting titled “mind the gap” she depicts a girl throwing her brain into a dark box dripping in ink. She said the painting was made to represent the Buddhist concept of space. There’s space between each event, as large as life and death, and as minuscule as each breath. If you invest your focus in the spaces — or mind the gap — you can learn to be more mindful and present, she said.

The entirely black and white exhibit has no shortage of visuals to keep viewers engrossed. Between the statues at the center of the room and the ink-based paintings lining the walls, hundreds of tiny and large images dance around. Even in the chaos of it all, each one of her characters wears a slight smile on their face.

Postma said she finds her inspiration from people. It’s the bravery and kindness she witnesses and receives from others that pushes her to create art that is full of hope.

“The other day I went into the pool to go swimming and this girl just said, ‘good morning Michelle,’ and I didn’t even know she knew my name,” Postma said. “Even simple things like that ... really inspires me.”

She often creates her images while swimming laps at the pool. Since there’s nothing to look at, she goes into her mind and imagines a central figure and then asks herself, “what else?” Then she builds outward.

She’ll often get these images in her head while out and about and sticks ideas in the note app on her phone. She writes out ideas in sentences to help her remember, an example being, “vacuuming girl holding up a lizard coming out of flowers and sucking everything into it.”

Once she actually begins to paint, she says the art will almost always surprise her. While she creates a general idea in advance, something new always pops into the work that teaches her about herself and the world.

“It’s really important for me to let whatever images arise come up even if they’re, especially if they’re really unexpected or strange or, you know, maybe unconventional, because that’s where the learning and innovation happen,” she said.

Postma has a sort of formula for deciding when something is finished. It’s like when you make guacamole — you have to taste it to see if it’s ready and if you keep eating it then you know it’s delicious, she said. When she’s painting something and steps back to see if it’s ready, she knows it is when she can’t stop looking.

“There’s never a dull moment or boring moment when you have Michelle in the house and that shows in her work,” said Patricia Thornton, the ZACC gallery director. “It’s not too much though — that’s the fine line with art you know. She knows how to tell the story and not go overboard.”

Thornton said she was ecstatic when Postma asked her if she could display her MFA thesis at the ZACC. The two had interacted before when Postma painted the mural for the ZACC’s interactive playground. Postma said painting that mural for the ZACC was a turning point for her as a young artist.

“People from the community, like the older generation of artists, have given me and other people of my generation a lot of opportunities to have work out in the wild, in the world you know,” Postma said.

Thornton was excited to display the art of a student because she thinks it’s important for the Missoula community and university to work together to support the arts. She was also happy to be able to show the fun and playful style of Postma’s work.

“Michelle’s work is just so dynamic and friendly,” Thornton said. “It’s everything we love about art: experimental, playful, narrative.”

The exhibit has been an astounding success so far. While the ZACC has had an average 30 or so visitors in their main gallery exhibits since the pandemic started, Thornton said Postma’s opening last Friday had around 150.

Thornton said it was a sunny day, all the doors were open and people came in and out throughout the evening, so the gallery was never too crowded.

“It was totally magical,” Postma said.

Postma created her own coloring book for any viewer of the exhibit to pick up on their way out. She loves that other people, who are her inspiration for creating, get to fill in her images with their own emotions through color.

"Heart Vomit and the Dream Army," UM student Michelle Postma's MFA thesis show featuring ink paintings and clay sculptures, is on display in the ZACC's main gallery through the end of March.