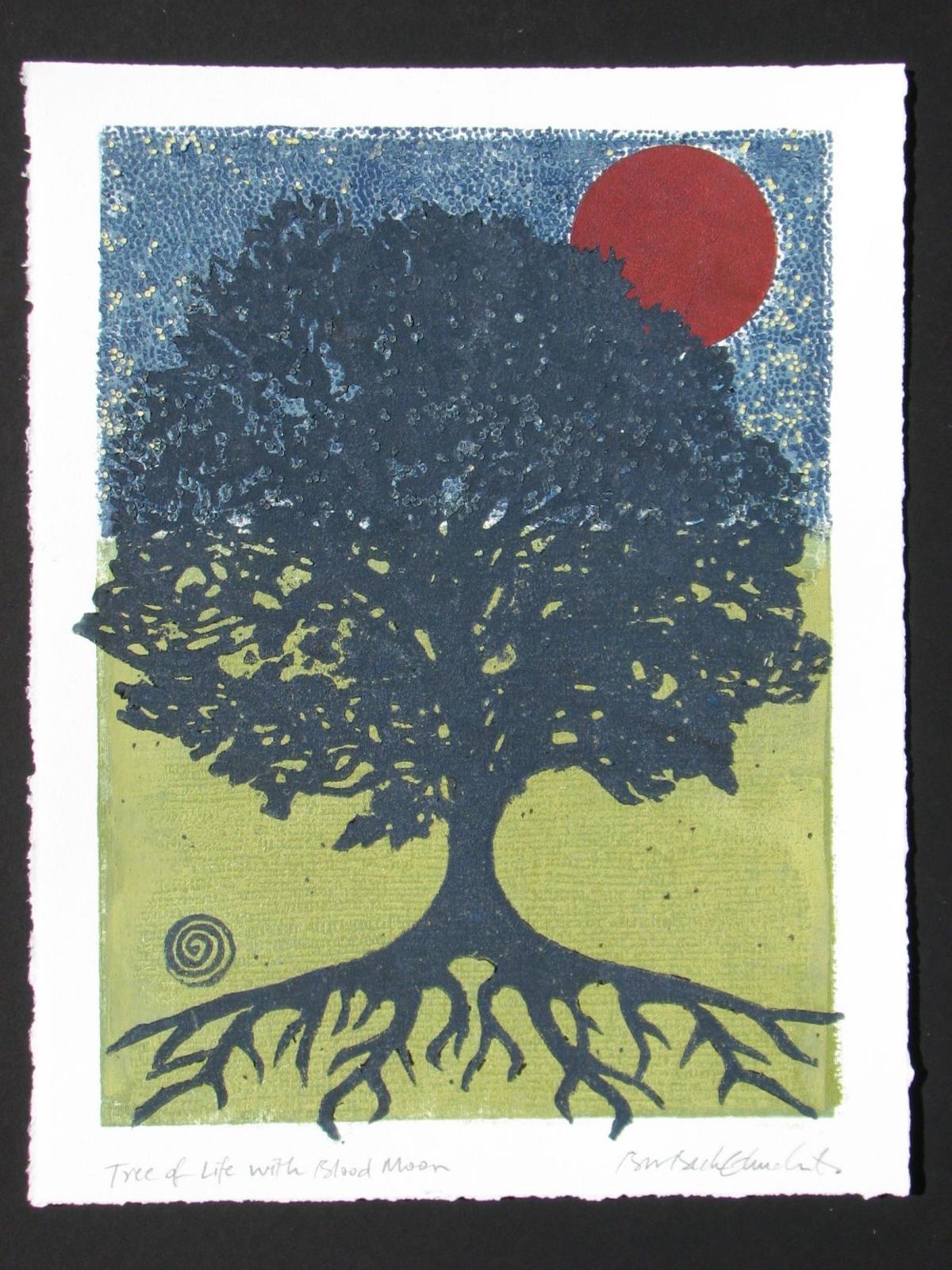 This year's featured artist Bev Beck Glueckert created a series of prints combining a "Tree of Life" image with various moons. This piece is titled "Tree of Life with Blood Moon." 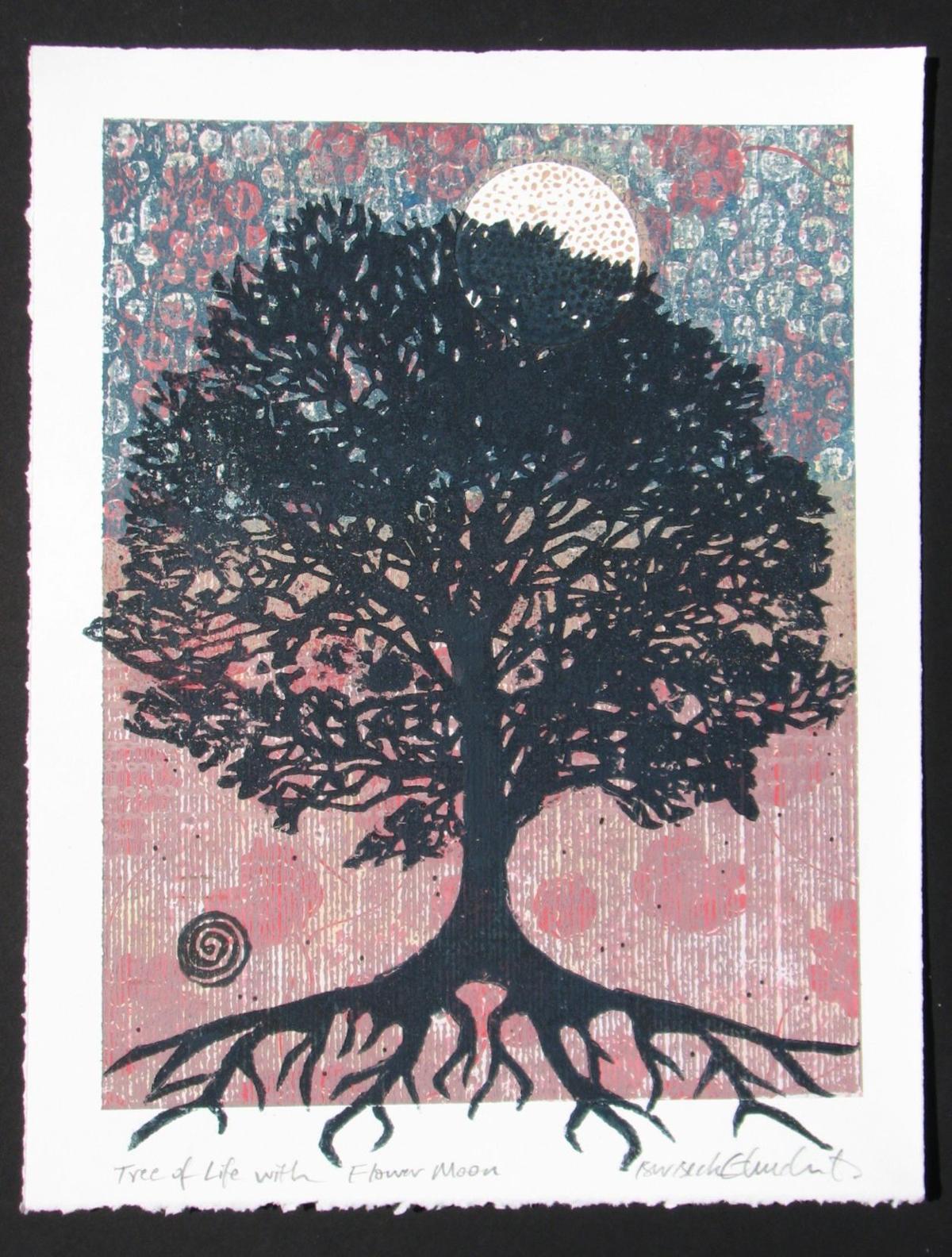 "Tree of Life with Flower Moon" by Bev Beck Glueckert, a featured artist during the Last Best Print Fest at the Zootown Arts Community Center. 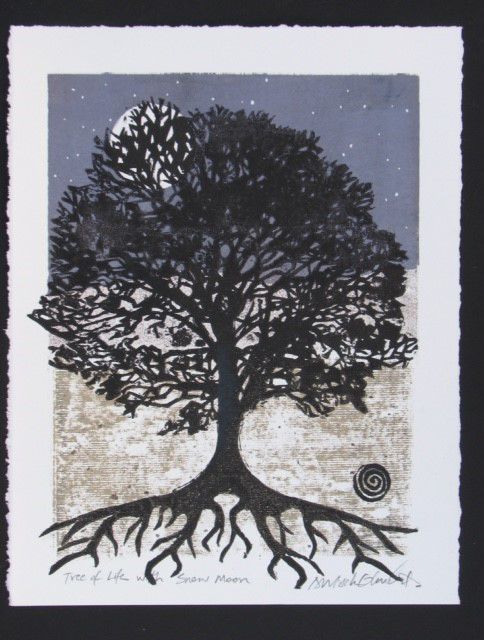 "Tree of Life with Snow Moon" by Bev Beck Glueckert. 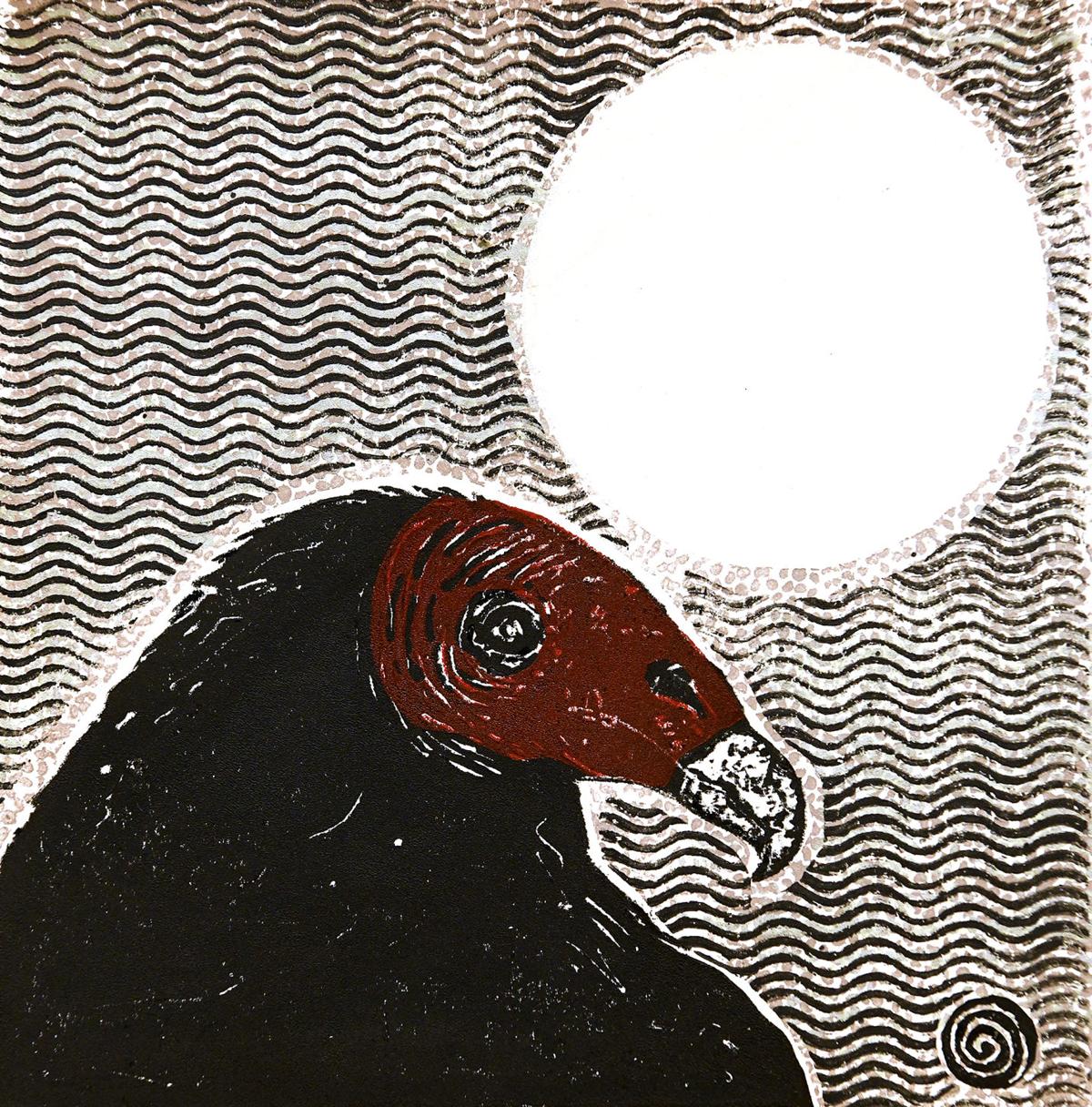 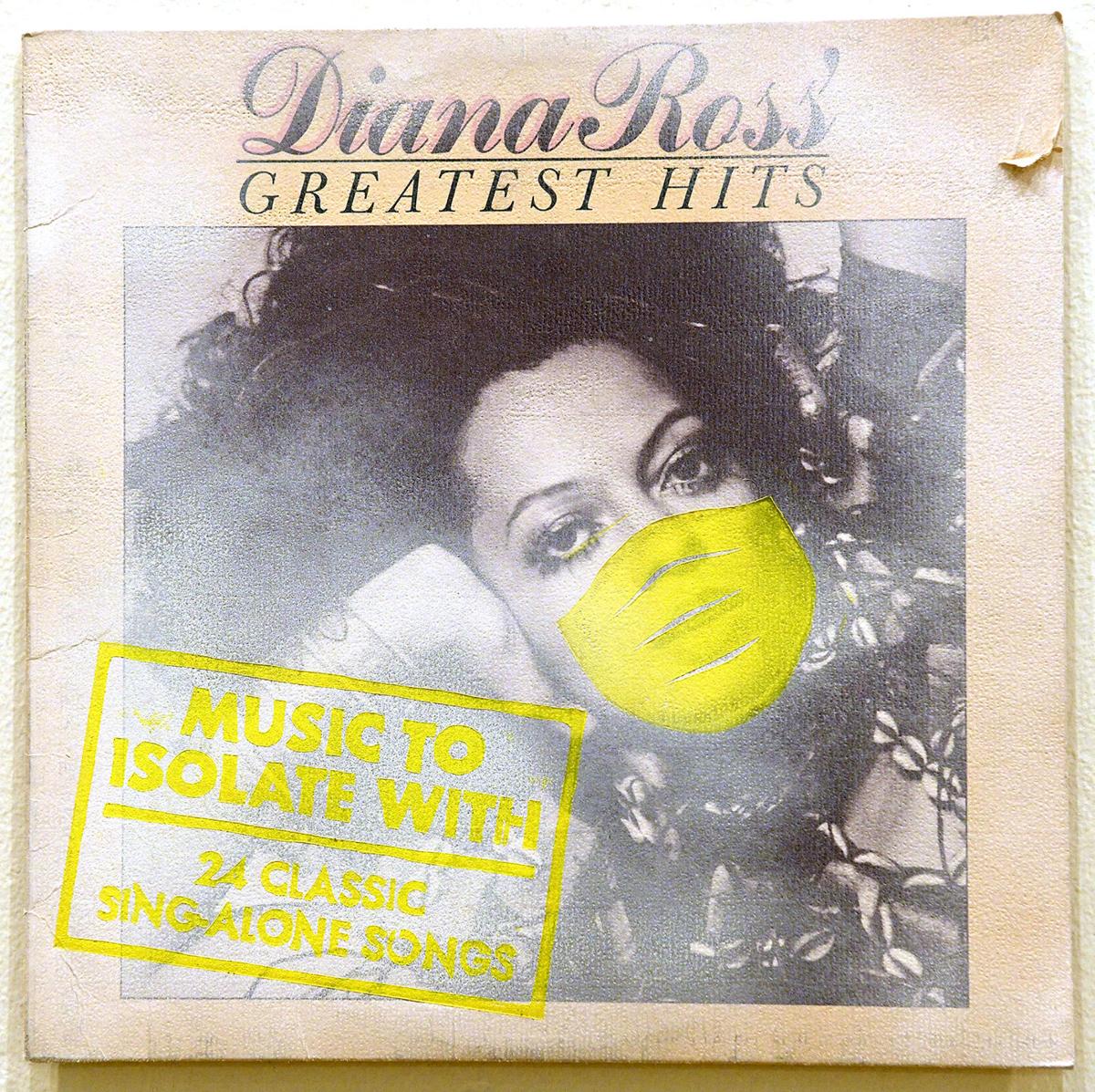 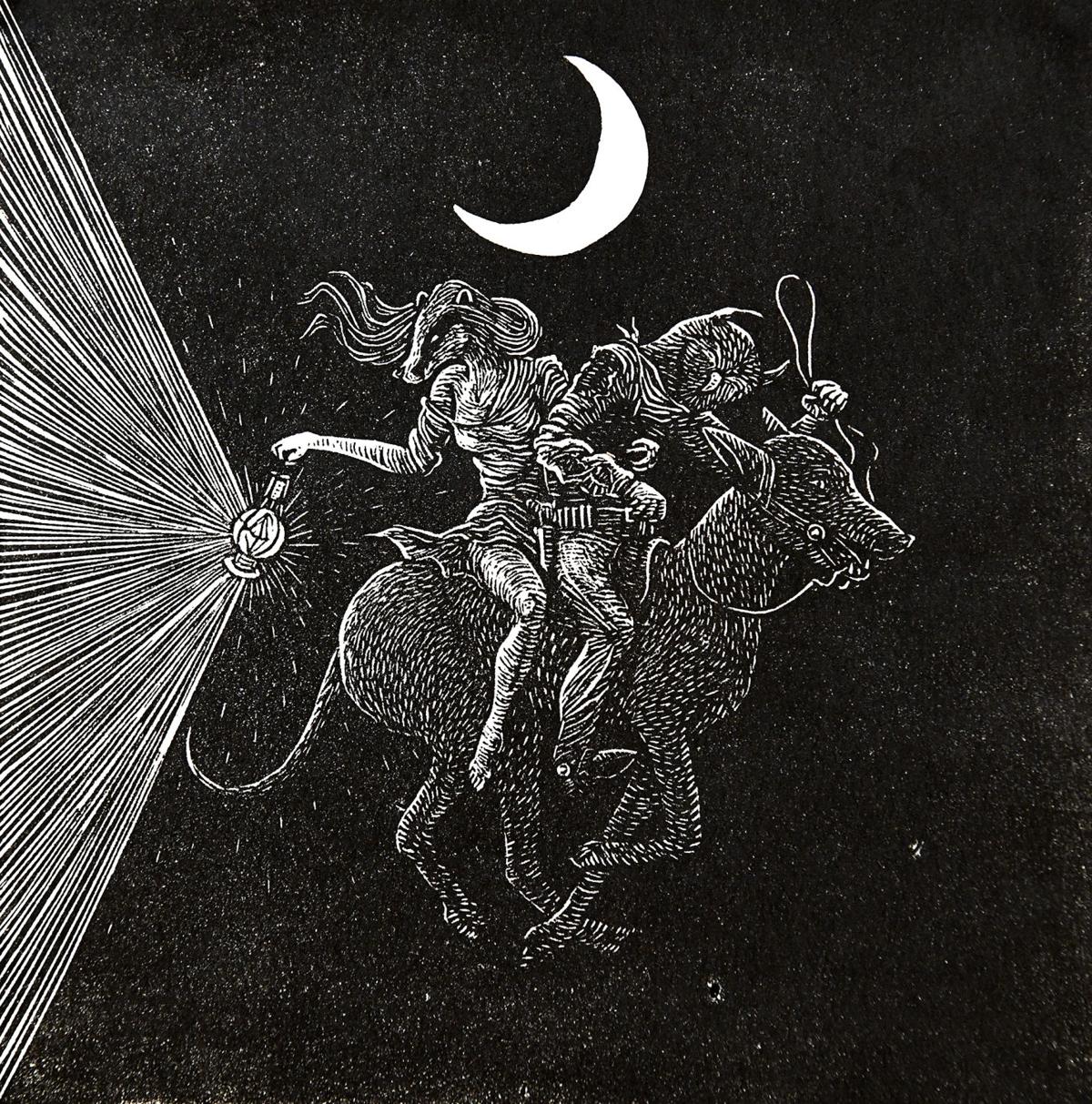 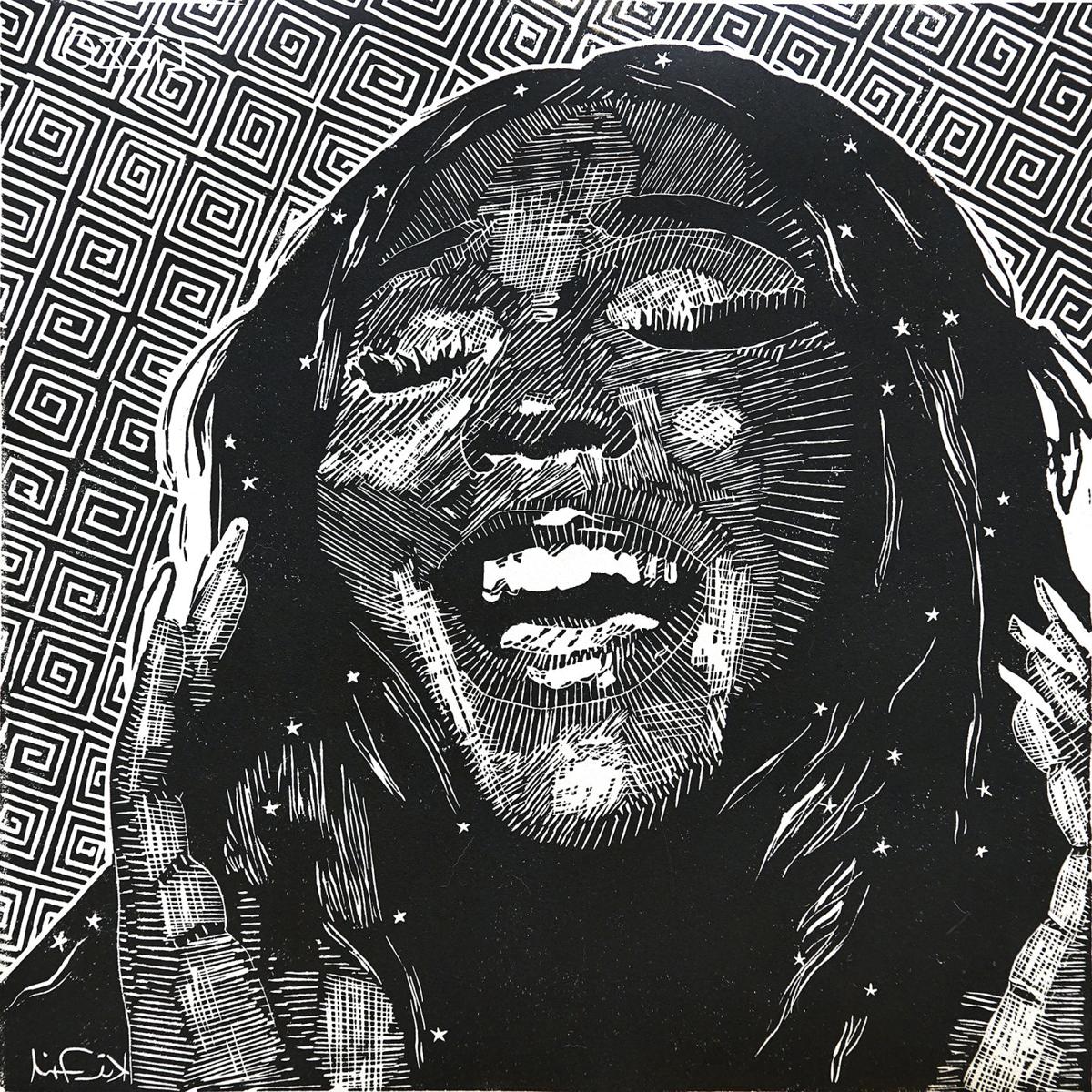 This year's featured artist Bev Beck Glueckert created a series of prints combining a "Tree of Life" image with various moons. This piece is titled "Tree of Life with Blood Moon."

"Tree of Life with Flower Moon" by Bev Beck Glueckert, a featured artist during the Last Best Print Fest at the Zootown Arts Community Center.

"Tree of Life with Snow Moon" by Bev Beck Glueckert.

Offering more than six different types of printmaking processes, the Zootown Arts Community Center’s Public Print Shop has become a hub for Missoula artists and those looking to learn since it opened nearly 10 years ago. Now, facing an uncertain future, the ZACC’s annual fundraiser for the shop is more important than ever to the continued success of a resource that serves hundreds of community members and organizations each year.

In the spirit of reproduction, one of the defining characteristics of printmaking, this year’s theme is “Covers,” inspiring many of the printmakers in the festival to emulate book or album art in their work.

In a response to the coronavirus pandemic, Lauren Tyler Norby found old album covers featuring people and placed masks on them using a wood block. His print in the auction is a Harry Nilsson "Nilsson Schmilsson" album cover with the musician donning a yellow mask and the words “MUSIC TO ISOLATE WITH.”

This year’s featured artist, Bev Beth Glueckert, was part of the original group of printmakers who spearheaded the effort to open the ZACC print shop.

“Bev was chosen because she’s been such a huge part of the ZACC over the years, especially the print shop,” said Patricia Thornton, ZACC gallery manager and head of the nonprofit’s printmaking resources. “She’s done demonstrations for us in the past for Last Best Print Fest, she’s taught classes at the ZACC and she’s always participated in the Last Best Print Fest portfolio exchange.”

Originally from Great Falls, Glueckert has been working in printmaking since high school and has taught classes and held workshops in Missoula for more than three decades. As the featured artist, she created a series of prints that pairs an image of a tree with the diverse types of moons that have been seen from earth over the past year.

The tree featured in the series, which she calls a “Tree of Life,” began to take on more meaning as the pandemic grew more dire and Glueckert began to put ink to paper. For her, the symbol represents both the interconnectedness of the universe as well as the differing roots and identities of individuals.

“I started working and I said, wow, working with something like a ‘Tree of Life’ is really important right now because this pandemic is just starting and we all sort of need something solid to hang on to,” she said. “We have different roots and different backgrounds, but then we all come together when it comes to just living on this earth.”

Her print in the auction also features a moon, but swaps out the tree symbol for a turkey vulture, a bird Glueckert said has significance for her and also speaks to a need for us to be resilient in the face of COVID-19.

“They thrive on carrion and they are just these complete survivors,” she said, adding the print captures the most recent celestial moon sighting, the pink supermoon seen in April.

They have been able to move their normally in-person free demonstrations to an online format, with artists in the festival recording videos that have been posted to social media and the ZACC’s website.

“Maggie Connors made a video of etching from home and she took CDs and she took a screw and she drew on the CDs with the screw and inked it up and it’s great,” Thornton said, adding she herself did a demonstration video on making stickers and Glueckert showed a hot glue gun release printing technique.

New to this year’s festival is a side project called “Pandemic Postcards,” a creation of printmaker Christa Carlton. The ZACC recently sent out 150 of the cards to 150 people on its mailing list.

“What we’re asking them to do is to add a message or a drawing, some kind of addition to the postcard, and then send it back to us and then we’re going to have them in a show,” Thornton said. “And we stamped them, so it’s for the ZACC and it’s also for the post office, because they’re having a hard time as well.”

While there are no specific directions related to the pandemic, the ZACC staff suspect people might use the post cards as an opportunity to express themselves.

In addition, they’ve moved their annual bingo game online and participants can search for prints on local businesses’ websites rather than at their storefront in person. The winner receives a Glueckert print and a $100 gift certificate that can be used at any of the nine participating bingo businesses.

Bidders may notice this year’s Last Best Print Fest auction has fewer works than in years past, as the University of Montana normally has a large contingent of students who submit work for the festival. Without being able to go to campus and use the printmaking equipment in their classrooms, the students weren’t able to participate, Thornton said.

Despite a smaller auction, the ZACC is hoping they can meet a goal of $5,000, similar to what they’ve raised in the past. Facing uncertainty ahead and unsure of whether or not they’ll be able to get income from classes and camps this summer, fundraisers for the ZACC and other arts organizations in town have become vital to their continued operation.

“Living in Montana, we’ve always had to pretty much all pull together in the arts communities to support each other and make everything work,” Glueckert said. “(Fundraising) is more important now than it has been for a long time, because we might be in danger of losing some of these organizations that are faced with extreme challenges during this pandemic.”

Thornton said as they look to reopen the Paint-Your-Own-Pottery Studio and the main gallery in June, things are looking up, but there is no telling how the rest of the summer might pan out.

“It’s a constant re-evaluation and being inventive of how we can try to raise money to make this thing last through this,” Thornton said.

Bidding for the Last Best Print Fest auction runs online through May 29. To find a link to the bidding platform or to sign up and participate in the ZACC's online bingo game, visit zootownarts.org.

Q&A: David Gerrold talks Tribbles, predicting the future and the benefits of dogs vs. cats