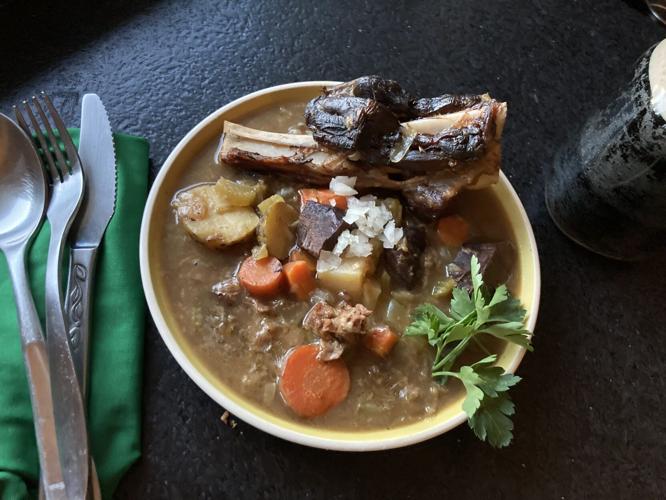 The stout’s bitterness makes a bit of sugar welcome in this stew, and together those flavors create a cola-like broth. The cumin isn’t even close to an Irish spice, but I happen to know that it goes well with beer and meat braises. 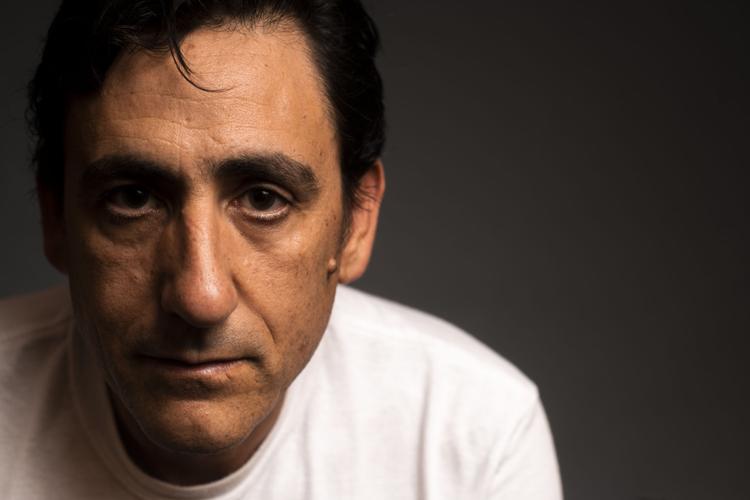 St. Patrick’s Day is here, which means that about two weeks ago you probably forgot to corn the beef. But there are other parts of Irish culture we can still celebrate, without as much advanced preparation. Like James Joyce, whose masterpiece Ulysses was first published exactly 100 years ago on Feb. 2, 1922. So in honor of this centennial, and St. Patrick’s Day, I developed this recipe for Guinness stew.

Any tough cut of meat will work. A bone attached is preferable, but a pack of stew meat chunks will make a glorious meal simmered in this dark, glistening and slightly sweet stout beer broth.

I was able to get some goat shanks, so I made goat osso bucco in honor of St. James Joyce, who I consider the GOAT (Greatest of All Time). Lamb would be a more Irish type of meat than goat. Any strong-flavored red meat, including wild game, will find a balance in the bitter, sweet and cumin-rich stew.

Joyce, a razor sharp observer of the human relationship with food, deftly used their appetites to develop characters like Mr. Leopold Bloom, one of the two heroes of Ulysses. The very first words we read about him are, “Mr. Leopold Bloom ate with relish the inner organs of beasts and fowls. He liked thick giblet soup, nutty gizzards, a stuffed roast heart, liverslices fried with crustcrumbs, fried hencods’ roes.”

Lust and food, and lust for food, are never far from Bloom’s consciousness, but in Chapter 8, Lestyrgonians, his appetite takes over. The Lestyrgonians were a mythical tribe of cannibals, and by the end of the chapter you can’t help but feel like a cannibal too.

The Soul Food of Ukraine

Bloom is the type to thoughtfully remind us of all of the gross things in a sausage, and then proceed to eat one in small, dainty bites.

Walking down the street, Bloom recognizes a local poet and outspoken vegetarian named A.E., and his disdain for the man and his diet are on full display.

His eyes followed the high figure in homespun, beard and bicycle, a listening woman by his side. Coming from the vegetarian. Only weggiebobbles and fruit. Don’t eat a beefsteak. If you do the eyes of that cow will pursue you through eternity. They say it’s healthier….Why do they call that thing they gave me nutsteak? Nutarians. Frutarians. To give you an idea you are eating rumpsteak. Absurd. Salty too.

Despite his revulsion to a vegetarian diet, Bloom is thoughtful enough to consider the possibility that he could have it wrong, and even acknowledges that it might make one a better poet.

Those literary ethereal people they are all. Dreamy, cloudy, symbolistic. Esthetes they are. I wouldn’t be surprised if it was that kind of food that produces the waves of the brain of the poetical. For example one of those policemen sweating Irish stew into their shirts; you couldn’t squeeze a line of poetry out of him. Don’t know what poetry is even.

A few minutes later, Bloom enters a raucous restaurant, anticipating a bite to eat, but quickly finds himself in touch with his inner vegetarian.

Perched on high stools by the bar, hats shoved back, at the tables calling for more bread, no charge, swilling, wolfing gobfuls of sloppy food, their eyes bulging, wiping wetted mustaches.

These observations of Bloom’s continue for long enough to make us all uncomfortable, until he finds himself literally grossed out the door of that establishment. He opts instead for a simple Gorgonzola sandwich, which he fastidiously dabs with mustard and slices into strips before eating.

My stout stew — or osso bucco if you’ve got the shin bones for it — is a nod to the organ meats that Bloom loves, prepared in delicate fashion of which he’d hopefully approve. The flavor of lamb is usually too strong for many people, but in this context the beer and spices balance the gamely animal flavors. I’ve even added chunks of elk heart to the stout broth, and the heart’s big, organ-esque flavor was gloriously absorbed. Chased with more stout, it’s a meal that is too satisfying to be true. You’ll swear it’s fiction.

Dehydrated tomatoes in the middle of winter

(Or osso bucco, if you got it)

The stout’s bitterness makes a bit of sugar welcome in the stew, and together those flavors create a cola-like broth. The cumin isn’t even close to an Irish spice, but I happen to know that it goes well with beer and meat braises.

2 lbs stew meat or meat on the bone

1 can Guinness or similar stout

1 slice of bread, torn to pieces

More salt and pepper to taste

Turn the broiler to high and brown the meat in the center of the oven. Then cook the meat until soft in water with a half can of stout. I used the Instant Pot, which took about 30 minutes, but you can also do it in the slow cooker or braise it in the oven.

In a heavy bottomed soup pan, saute the garlic and onions in butter. When the onions are translucent, add the carrots, celery, potatoes, vinegar, cumin, bread, salt, pepper and sugar. Cook on medium until the bread dissolves and the broth is dark, thick and glistening. Season with extra salt, sugar or even beer, if you think it needs it. Serve dusted with chopped parsley, which looks like shamrocks if you squint your eyes. Wash it down with more stout.

Ari LeVaux writes Flash in the Pan, a syndicated weekly food column carried in more than 60 newspapers nationwide. Though his audience is national, he says he “always writes about Montana. Usually.”

9 places to dine and drink outdoors