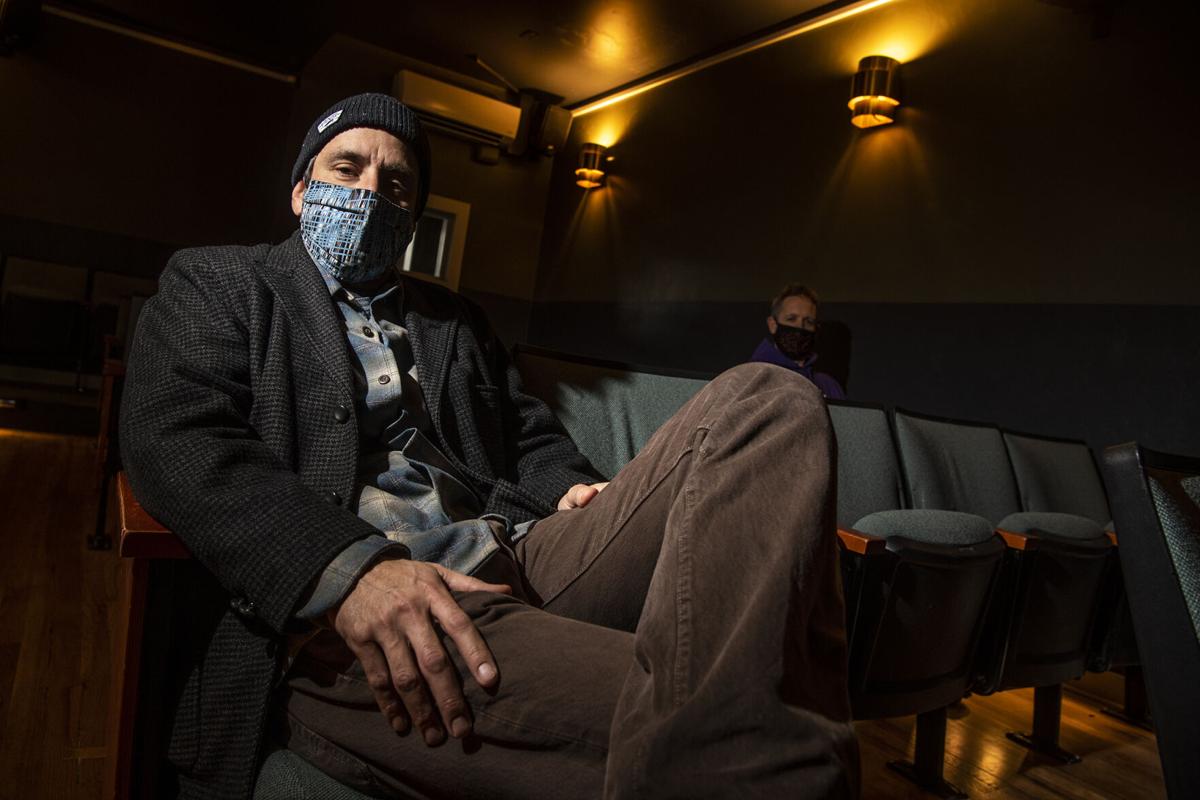 Mike Steinberg, executive director of the Roxy, sits for a portrait in the theater's new Roxy Annex screening room on Thursday. 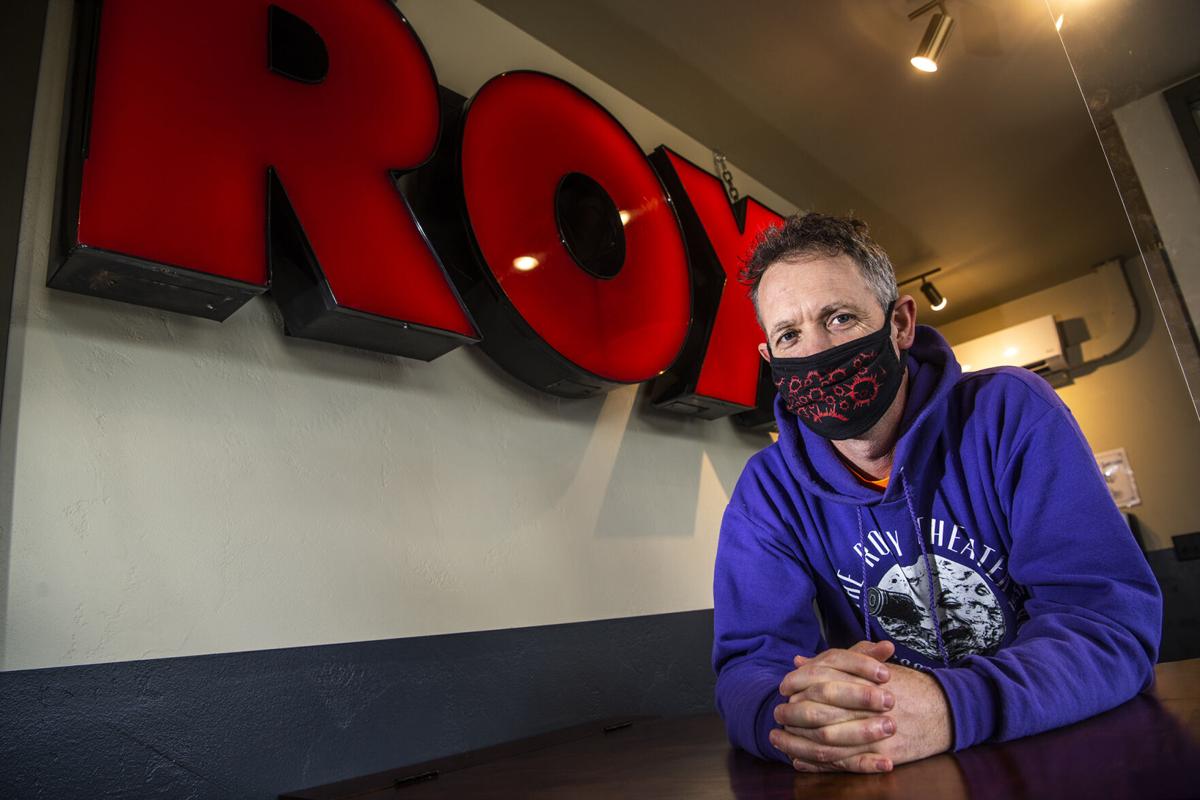 Chris Sand, a longtime Missoula musician and Roxy employee, stands for a portrait in the concession area of the new Roxy Annex. He said he's "interested in the rhythms of this place and I want to see what it does two years from now, five years from now, and hope that it just keeps on morphing into something that works for the community."

Mike Steinberg, executive director of the Roxy, sits for a portrait in the theater's new Roxy Annex screening room on Thursday.

Chris Sand, a longtime Missoula musician and Roxy employee, stands for a portrait in the concession area of the new Roxy Annex. He said he's "interested in the rhythms of this place and I want to see what it does two years from now, five years from now, and hope that it just keeps on morphing into something that works for the community."

During COVID-19, the theater had to rethink all of its programs after home viewing became the default.

Through the end of the month, the marquee on the historic building is promoting Kiddomatic, a film festival that's showing online only. If you want to see the movie in the theater, though, you have to rent one for a private movie party. Next door, in the new Roxy Annex, the nonprofit community cinema just completed renovations for a fourth screening room, which can be rented for small-capacity kids (or adult) video game parties, karaoke get-togethers, or movie screenings.

Work on the annex was under way before COVID, envisioned as another expansion for the packed programming calendar at the community cinema, which began showing movies year-round in 2014.

Its structure as a nonprofit has given it more flexibility to try new things, but they also feel their roots here have been crucial.

“The real answer is that we’re in Missoula, and I feel like the community support and the desire to help something local and something that’s as completely homegrown as it is, is so strong,” said Mike Steinberg, the executive director.

Since the pandemic, rentals have become an even more crucial part of its business. Around 30 to 35 times a month, people and their pods can choose a movie and social distance without worrying about getting too close to strangers while watching films like “Caddy Shack” and “Back to the Future.”

Local support will be even more important going into winter, when the outdoor screenings have long passed. On Black Friday, the Roxy is launching a year-end fundraising campaign to bring in $50,000 for its operations through April, said Tammy Bodlovic, the development director.

While the holidays and winter are traditionally a busy time, the Roxy currently has only "a couple of forms of revenue," she said.

In April, weather permitting, they can start up outdoor screenings again at the movie garden for the 44th annual International Wildlife Film Festival.

“We can do some more things outside and increase our revenue streams, but until then, our sole income is going to be support from our members and our donors and those that choose to rent the Roxy for a private event,” Bodlovic said.

The Roxy closed its doors for about five weeks starting in March. However, it never re-opened for the typical public screenings at its three main theaters. Instead, it started up the movie parties with vastly lower capacity and other health and safety measures.

In September, the staff re-examined the long-term outlook for re-opening an old-fashioned way. “We quickly changed the name from the ‘re-open committee’ to the ‘stay-closed committee,’” Steinberg said. The maximum capacity of some 30 people wouldn’t make sense financially, supposing they could find a movie that would draw that crowd when Hollywood blockbusters play to mostly empty rooms around the country. There’s little support in the community to resume the normal screenings, or within its staff of rabid movie fans.

One major dose of help came this summer from the Missoula Paddleheads, who reached out with the idea of weekly socially distanced screenings at the ballpark, where the team held events after the season was called off. They showed 14 to 15 over the course of the summer, averaging about 500 in attendance. The “Centerfield Cinema” income “meant we stayed alive,” Steinberg said. They also finished and opened the movie garden, although, with its much lower capacity, it was a smaller piece of their income.

Year to date, the Roxy’s revenue is at about 50% of normal, Bodlovic said, in what they’d projected to be a time of growth. They’ve had to reduce employees’ hours, and in some cases, lost staff members to other opportunities. Their goal, though, is stay open in some capacity, so when things are clear they’re not “going from zero to 50 or 60,” Steinberg said.

They’ve received government assistance, such as a Paycheck Protection Loan, and a recent grant for nonprofits from the state through the CARES Act. The Art House Convergence, a national consortium of independent theaters, provided grants earlier this year.

Locally, the Roxy’s annual membership program was “the wind in our sail heading into this,” Steinberg said. A large increase in memberships starting last Thanksgiving was a boon, even after they had to curtail the benefits — such as tickets and popcorn — after the closure of typical screenings.

“We’ve got a lot of really understanding members who just said, ‘convert my membership to a donation,’ or ‘I don’t expect anything, just be there when you can re-open,’” he said.

Bodlovic, too, said that kind of support has been strong — in the spring, they raised money by asking people to consider donating the cost of a ticket and a bowl of popcorn, and received more than 500 individual contributions which have “grown exponentially since then.”

She said it’s different than fundraising during a recession, and while they know everyone is struggling, there’s a sentiment that “we’re all in this together.”

“We all want to support everybody, whether it’s your local cinema, or your favorite restaurant, or small business, so whether you’re making a small donation, buying a gift card, getting some curbside to go, I feel like there’s more of an effort by everybody to keep everyone alive together and going,” she said.

The Roxy is home to three film festivals, all of which fell after the start of the pandemic, including the IWFF and the five-year-old Montana Film Festival, a slate of local and boundary-pushing films. Through the end of November, you can log in and watch the Kiddomatic international children’s film festival. A family pass gets you access to the shorts and features from around the world, curated by staff.

Carrie Richer, the artistic director, said that when choosing movies, they kept in mind the “total change” in school and family life for parents and kids. They partnered with Arts Missoula and Spark! Arts program to provide access to the movies — fun but informative and diverse films — and educational materials.

Richer attributes the success of the festivals’ move online to the Roxy’s brand. “We still have this curatorial power,” she said, and an “awesome, loyal community that really trusts us” to choose great films that appeal to their interests.

She is also the artistic director of the International Wildlife Film Festival, which marked its 43rd year in the last half of April, mostly overlapping with Montana’s stay-at-home order.

It was their first online festival, which wasn’t a well-established format prior to the pandemic. Besides the movies, festivals draw crowds to see filmmakers, guests and panels, and conversation afterward. Going online only was a do-it-yourself effort in the spring, but “the technology in the last six months has grown by leaps and bounds” she said.

IWFF exceeded all their expectations, selling passes in 47 states and 27 countries around the world. They have analytics to help inform some film choices in the future, too. Richer said they discovered the value of specificity when you have so much more reach beyond the immediate area.

An example is “Takaya: Lone Wolf,” a documentary centered on a solitary wolf that lives on a small island off the coast of British Columbia.

“The amount of passes we sold in Vancouver was unbelievable,” she said. Looking toward next year, they are “looking for stories that really inspire pocket communities” of film fans.

While they “never would’ve considered” online offerings in the past, Richer said it’s something they want to maintain moving forward. Next April, IWFF will likely be a combination of an online festival with small outdoor screenings, when they hope to open the movie garden again.

Earlier this week, Chris Sand, the concessions manager, was polishing up the snack booth as the annex prepared to open for rentals.

He’s worked various jobs at the Roxy for the past seven years, saying it “always felt like a true candy land to me,” surrounded by movies and literal candy, both of which appeal to his 8-year-old daughter.

While the year has been filled with sometimes difficult changes, he said he’s fascinated by “the rhythms of this place, and I want to see what it does two years from now, five years from now, and hope that it just keeps on morphing into something that works for the community.”

For more information on the rental parties, safety rules or movie festivals, go to theroxytheater.org.